Inverting this logic, bad losers must be winners.

Which means Aurora Cannabis (ACB.NYSE) shareholders are the biggest winners in the world.

Because they are extremely ungracious in defeat.

“Aurora is a total rip off run by a bunch of Canadian thieves,” stated one grumpy investor on a public bull-board, “All the earnings are going into the pockets of the people running the stocks instead of the investors. Low down dirty crooks!!!”

“Avoid ACB, it’s just a rip-off stock,” warned another investor, “I lost a bundle over the last five month and I finally gave up and cashed out the few dollars I had left. Rip-off stock!”

“ACB are liars and thieves” stated yet another investor, “Where did all the profits go? The management is out on their yachts laughing at us!”

To review, Aurora is the 3rd biggest cannabis company on the planet by market cap.  It’s worth about $7 billion.  Only Canopy (CGC.NYSE) and Tilray (TLRY.NASDAQ) are bigger. 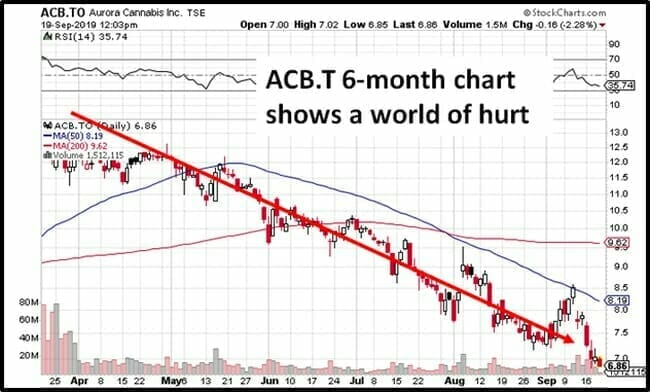 What sins has Aurora committed?

ACB promised that it was “tracking toward positive adjusted Ebitda.”

Let’s be honest, “tracking toward positive adjusted Ebitda” is a like “getting closer to being named Time Magazine’s, Man-of-The-Year”.

But with no timeline or inferred-probability-of-success, it’s hot air.

Never the less, the market applauded. The stock rose from $8.75 to $9.51 that day. By mid-morning, the chart looked like this: 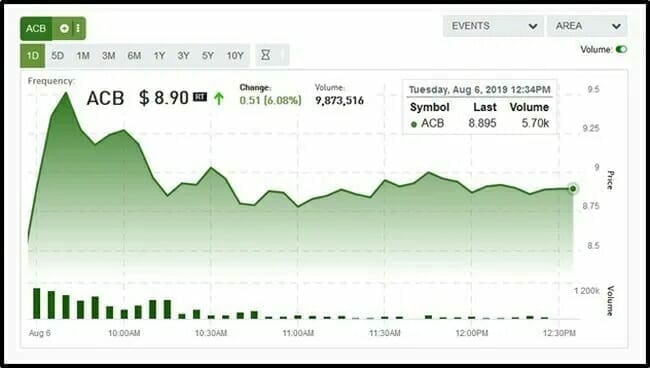 Ominously, ACB elected to release the real (not “projected”) numbers on the anniversary of 9/11.

The September 11, 2019 press releases revealed that Aurora’s revenue was only $98.9 million.  There was an “adjusted Ebitda loss of $11.7 million”. Year-end accounting sleight-of-hand made the Ebitda loss look smaller than it really was.  Without the adjustment, the loss would have been about $27 million.

“The fact that no big-name brands have cozied up to ACB should raise some major red flags,” the article continued.

Short sellers feasted on ACB and other fading cannabis companies. Positions in the 20 most-shorted weed stocks made $1.5 billion this quarter.  Big turn around from last quarter, when cannabis short-sellers booked $2.3 billion in mark-to-market losses.

To be fair, ACB’s quarterly revenue was the largest ever reported for a marijuana company, and “net cannabis revenue” of $94.6 million was 94% more than the previous quarter.

Should we have seen this coming?

“Millennial opioid-users are buying Aurora Cannabis (ACB.T) on a free app called RobinHood,” we reported on May 29, 2019.

According to CNBC, “Robinhood is a popular millennial free trading platform.

Drug-use data suggests that 720,000 of Robinhood’s 6 million are high on opioids.

“I’m not exactly excited about it being the top traded company on Robinhood,” stated Throwthler1 on an investment bull-board.

“This is maybe the best signal you can get to short something, friends,” agreed ExtendedDeadline on the same bull-board in reference to ACB’s #1 Robinhood status.

“I want to acknowledge that we slightly missed our guidance on our overall net revenue,” stated Aurora Chief Corporate officer, Cam Battley on a September 12, 2019 earnings call, “We projected $100 million to $107 million in overall net revenue. We came in 1% below that at approximately $99 million. That shouldn’t have happened.”

No person, no company – should ever apologise for doing 99% of what they said they would do.

If I wet-mop my cousin’s kitchen, I don’t expect to be bitched-out for missing a spot the size of a coffee coaster.

Aurora is too big for my taste.

From 2017-2018 investors loaded up on ACB because it was big, and other investors were loading up on it.

“I have been an Aurora and Canopy (or should I say Coke and Pepsi) investor for over
3 years,” stated one investor on a bull-board yesterday, “I’m still up over 100% on my 10k shares of ACB. I remember what they said about Amazon back in the early 90s. Just a book store!! So just remember a little history and for my like-minded investors, SEE YOU ON THE BEACH”.

I put my three month old baby granddaughter’s future in their hands for her College wedding first home…..
They will feel the wrath of God