This gives investors a sneak peek, prior to official audited earnings, at some of the numbers.

The market applauded. In the first 40 minutes of trading, the stock rose from $8.75 to $9.51. By mid-morning, the daily chart looked like this. 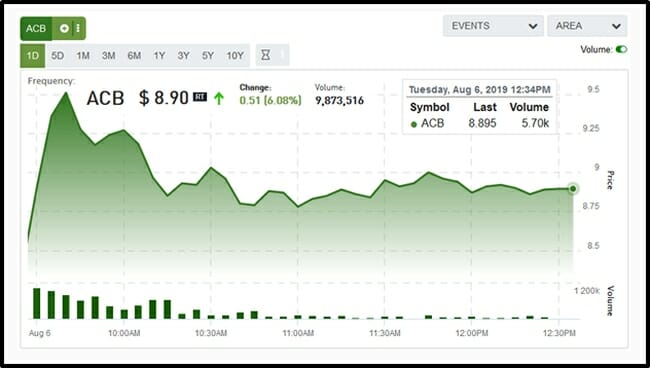 ACB investors waiting with bated breath for the Q4 projected profit/loss were left in the dark.

Aurora’s accountants are “in the process of performing year-end audit procedures.” Apparently, five weeks (starting from June 30) is not enough time to estimate profitability.

Aurora has a market cap of $9 billion.

Until recently, large cannabis companies didn’t have to worry about profitability. Just being big, having lots of cash, and increasing revenues was enough.

On the Q4 2019 earnings call, Bruce Linton claimed that Canopy could have stayed a small profitable company, “but after the $4 billion injection from Constellation Brands, you need to use that capital to build scale, and we did.”

Shareholders were not consoled. Neither was Constellation’s CEO Bill Newlands, who stated the next day that “we were not pleased with Canopy’s recent reported year-end results.” Newlands also sits on the Canopy board.

A few days later, WEED announced that its long-time co-CEO Linton will “step down” from all positions and responsibility at the company. 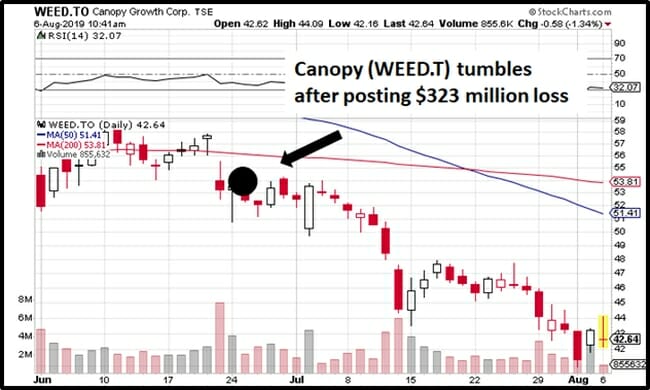 “Folks be running about with their hair on fire right now, pointing to a sky that for sure is falling because a few of their favourite weed stocks have come off absurd highs and what if it never comes back?!” wrote Equity Guru’s Chris Parry on July 29, 2019.

And then, something nutty happened. 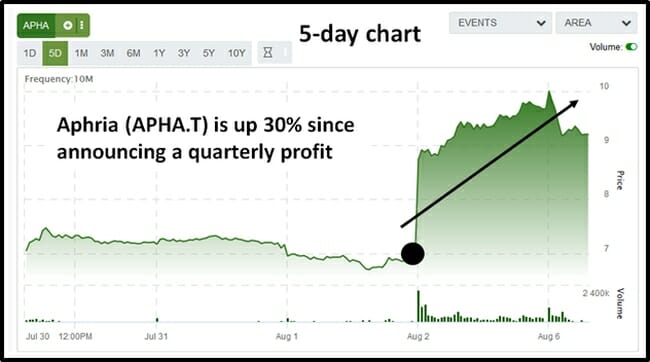 In the August 6, 2019 news release, Aurora states that its “core philosophy of ‘purpose-built facilities’ has focused on high-quality cultivation of medical-grade cannabis globally.”

“On July 18, 2019 Aurora Cannabis has been named as the sole winner in the Italian medical cannabis tender process,” wrote Equity Guru’s Ethan Reyes.

“We set out to be best-in-class cultivators, and through carefully evaluated acquisitions, that vision continues to drive exceptional results today,” stated Terry Booth, CEO of Aurora. “Our success to date comes from a focus on quality, regulatory compliance and appropriate Board of Directors oversight.”

In Q3 2019, ACB reported “goodwill” of $3.18 billion. Aurora’s “goodwill” is an admission that it has been overpaying for assets. A year ago, the goodwill was calculated at $750 million. It’s now about one-third of the market cap.

The Bank of America (BOC) has warned its clients that ACB could run out of cash by Q1 2020. In March 2018, ACB closed its sixth convertible debenture. Unless ACB stock rises 65% in the next six months, it will have to pay back $230 million in cash on March 9, 2019.  BOC recently downgraded Aurora.

Aurora explicitly warns that its “estimates are preliminary and Aurora’s actual results of operations and other data could differ materially from these estimates.”

Projected net revenues of $100-$107 million is nothing to sneeze at.

But in this post-euphoria cannabis investment landscape, the “selected financial metrics” omitted the most important number.

Or lack of them.

The recent fates of Canopy and Aphria indicate that profits – not revenues – will be ACB’s key share-price driver.

Aurora has stated that “full results will be published prior to September 15, 2019.”