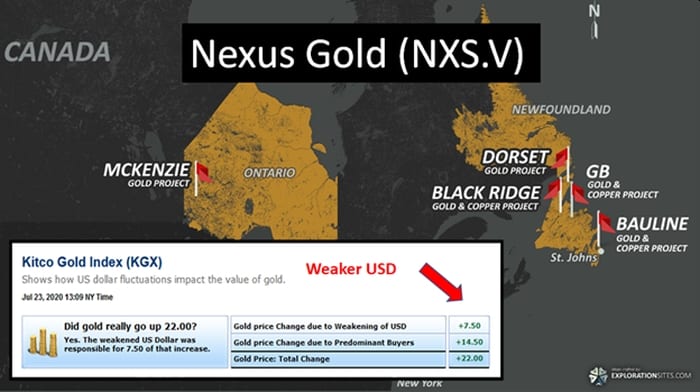 “I think that we have some upside still on gold and $2,000 might just be a conservative estimates,” stated Marc Chandler, Chief Market Strategist at Bannockburn Global Forex in a July 22, 2020 Kitco Gold interview.

“I’ve been bearish the dollar and it sort of lined up with my bullish gold view,” added Chandler, “But now I think a lot of other people have joined this dollar bear party”.

By mid-morning, the USD is down sharply again.

In December, 2019, we pointed out that, “The U.S. government owes about $23 trillion (a lot of it to China), and is plunging another $1 trillion in debt every year”. We claimed that – despite all the borrowed money sloshing about the system – “America’s economic engine is sick”.

“There will be a devaluation of fiat currency, particularly the U.S. dollar,” we wrote in 2019, “gold may be a powerful defensive strategy to preserve and grow existing wealth.  Typically, if there is a flight to gold, the gold juniors (GDXJ.NYSE) will out-perform bullion and big-cap miners”.

In 2020, the U.S gov. has borrowed another $7 trillion, the U.S. dollar has weakened further, the flight to gold is now a stampede and many gold juniors have experienced sharp gains in share price.

Nexus Gold (NXS.V) is a case in point. 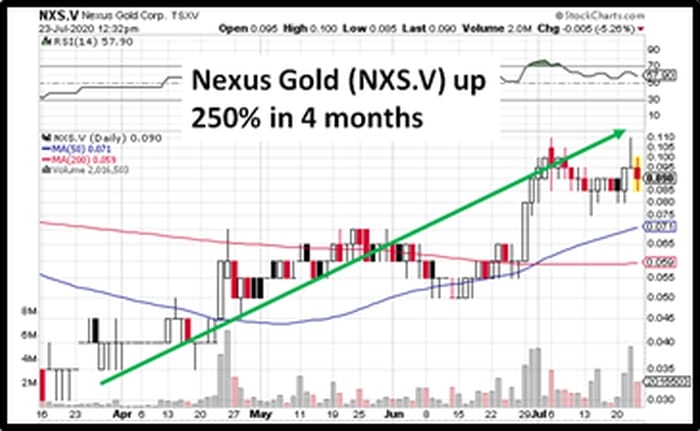 On July 23, 2020 Nexus Gold provided a corporate update to shareholders:

Phase one drilling is finished at the 100% owned McKenzie Gold Project, in Red Lake, Ontario. The 2000 meters of diamond drilling tested the mineralization potential of several gold targets occurring within an east-west trending corridor.

A 2005 drill program along this corridor returned:

Note the reported lengths are intercepts and not true widths.

The McKenzie Gold Project is a 1,400-hectare property. Areas of high-grade gold mineralization have been established within the northern portion of the claim block (McKenzie Island), with significant gold values having been drilled along a 600-meter strike in the southern portion of the property (St. Paul’s Bay area).

Assays from phase one are expected by mid-August. 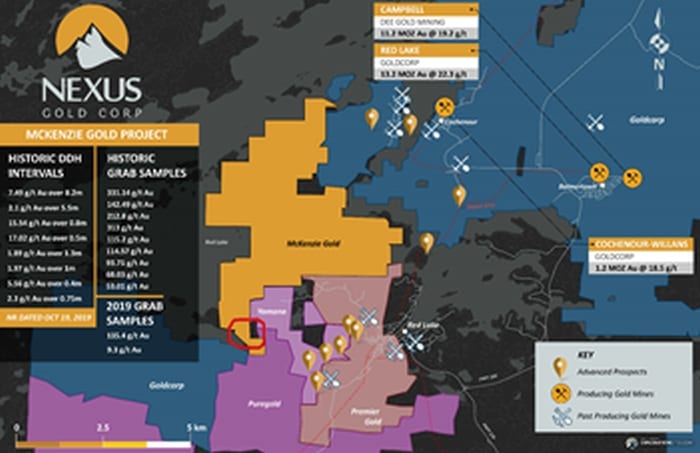 Groundwork and reconnaissance programs for the Black Ridge, Bauline and GB Gold-Copper Projects are currently being scoped for late summer and early fall commencements. These programs will include sampling and mapping of historic showings to provide needed data for drill target generation.

The Company’s Dorset Gold Project , located in central Newfoundland, is currently under option to Leocor Ventures (LECR.C) for $1 million in cash over the next four years, and $1.25 million in work commitments through April 2025, at which time Leocor will have acquired 100% interest in the project. Leocor has begun a sampling and trenching program at Dorset, updates will be provided as work progresses. 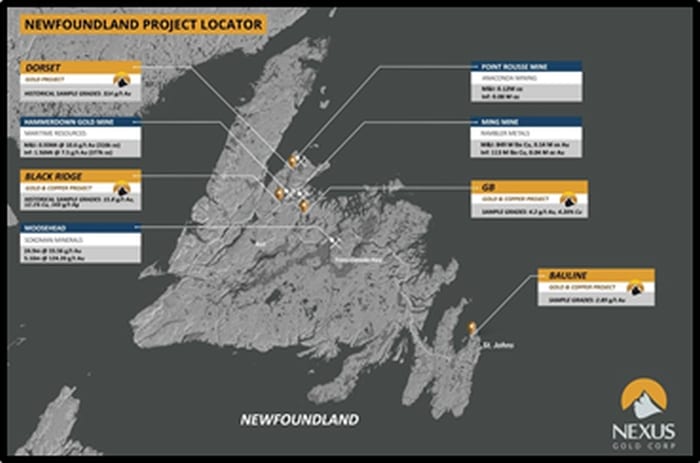 Of the first 27 samples collected by the Company to date, 13 have returned assay values greater than 1 g/t gold.

More details on the upcoming drill program will be made available in the coming weeks.

The 250-sq km Rakounga Gold Project is currently under option to private company Kruger Gold, for $1M in cash considerations through March 2024 and $1.25M in work commitments through March 2025, at which point Kruger will have earned a 90% interest in the project. Kruger is currently planning a late summer work program; details will be made available closer to the commencement date.

Additional updates regarding upcoming work plans at the Bouboulou, and Manzour-Dayere projects will be announced in the coming weeks.

An institutional investor is expected to take down the majority – or all – of the announced placement. The proceeds will be used to advance exploration programs at its Dakouli 2 Gold Project, located in Burkina Faso, West Africa. 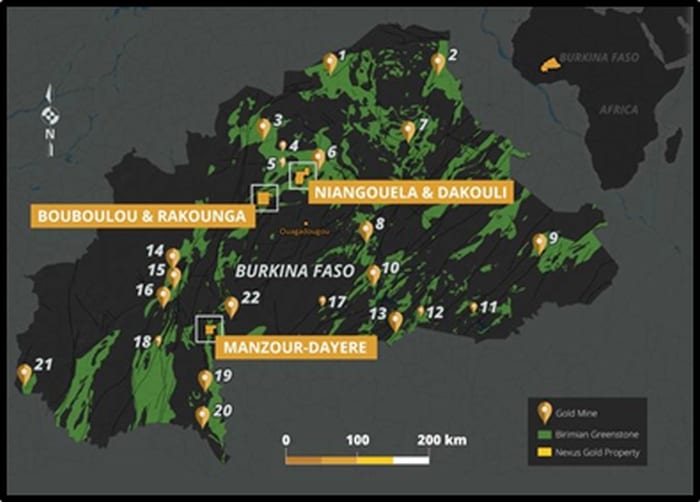 Today, the U.S. announced “an unexpected” [?] new rise in jobless claims which just rose by 1.4 million.

“The new claims brought the total since the week ended March 20 to more than 52 million,” reported Yahoo Finance, “underscoring the devastating impact of the coronavirus pandemic and measures taken to contain it on the labor market”.

Republican lawmakers are planning to extend unemployment benefits at a reduced $100 per week to the end of the year, down from the current $600/week.

More in depth information on Nexus Gold can be found here.

The data has now been corrected.