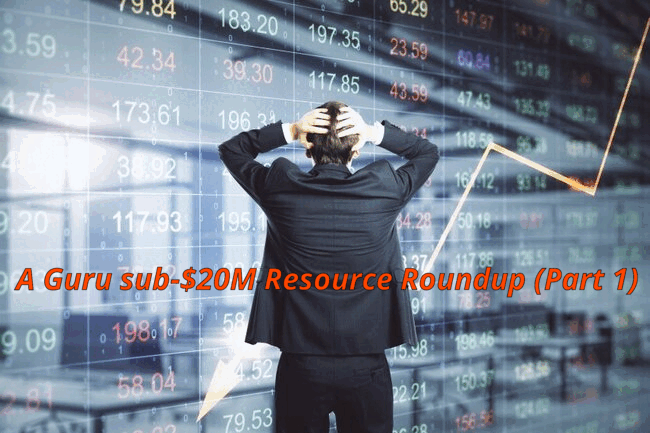 Unabated selling, dry powder, the upside of buying when you’re the only bidder in the room – a Guru roundup (Part 1)

A ‘medieval battlefield at dawn’ might best describe the current state of the junior exploration arena. Many of the stocks I track have been unseamed from the nave to the chops in recent weeks.

An example of this pervasive, unabated selling pressure…

The above chart depicts a well-run, cash-rich explorer on the cusp of defining a (potential) world-class orebody. Nothing I can discern—nothing in the way of negative news—warrants the scale of this decline, apart from weak-kneed retail investors simply throwing in the sponge.

But it’s important to bear in mind that these are uncharted waters, for all market sectors. In this era of difficult-to-comprehend debt, negative bond yields, over-heated monetary expansion, and the likelihood that inflation is not as “transitory” as the Fed would have us believe, the storm clouds are gathering, intensifying.

Regarding inflation, the Fed now appears to be wavering in its convictions. During a recent monetary policy meeting, chairman Powell stated: “We do think that inflation will remain elevated until supply bottlenecks are resolved. Exactly when that will happen is not possible to say.”

The debt ceiling is another major obstacle. The U.S. government is set to run out of funds on October 18th. If Congress fails to raise the ceiling within the next two weeks, the U.S. will go into default for the first time in history. Treasury Secretary Janet Yellen: “Credit of the U.S. would be impaired, and our country will face financial crisis and an economic recession. It’s necessary to avert a catastrophic event for our economy.”

The charts and attendant price patterns across multiple sectors are being surveilled by a universe of traders. The major indices—the Dow 30, the Nasdaq, the S&P 500—all appear to be forming potentially bearish Head and Shoulders patterns. Heightening the drama, a number of popular pundits are calling for an imminent crash.

So why isn’t gold screaming higher amongst all of this chaos and uncertainty?

Though the short term is impossible to call—a stock market shock will likely take everything down with it as liquidity constraints and margin calls come into play—the precious metal, as a hedge against protracted periods of uncertainty, should outperform.

Don’t worry—I won’t get into the fiction that is the paper price of gold, which defies even the most basic measure of price discovery. I’d need my tinfoil hat for that one anyway (my girlfriend’s cat now occupies said hat).

Back to the present state of the junior exploration arena: Are we grinding out a bottom here?

One indication that this sector-wide correction is getting long in the tooth is the current level of negative sentiment—the pervasive despair among investors as measured by the Gold Miners Bullish Percent Index. Not since the 2020 market crack has pessimism sucked thus and so.

Bottoms have a way of forming when negative emotions run this deep.

But when sentiment is this bad—when fund managers and hapless retail investors toss their positions with little regard for intrinsic value—it’s difficult, painful even, stepping up to the plate and initiating purchases.

Buying severely depressed stocks is a counterintuitive process—an exercise that should trigger a host of negative emotions on a gut level.

In cycles past, my biggest wins in this arena stemmed from overriding my reluctance and apprehension, holding my nose, and willing myself to pull the trigger on my trading platform. This is the act of a true contrarian: Standing alone. Buying when you’re the only bidder in the room.

Though charting is a largely subjective exercise—surety depends on how sharp your pencil is—it can be a valuable tool. At the very least, it can help structure your thinking where entry and exit points are concerned.

This chart of the VanEck Junior Gold Miners ETF (GDXJ), augmented by my support/trendlines, tells me that the sector may be in the process of bottoming out.

Back in my rookie days, my trading mentor stressed the importance of Divergences (positive and negative). A Positive Divergence occurs when the price of a commodity, index, or stock prints a new low while a momentum indicator (Money Flow, for example) registers a higher low.

This next image zooms in on the GDXJ and shows a classic Positive Divergence in the making. 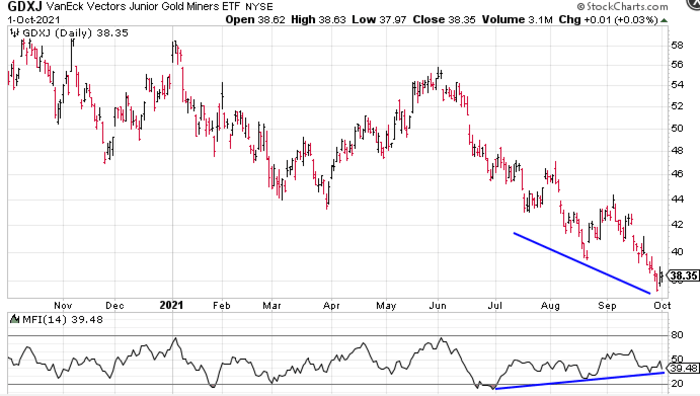 The new lows in the GDXJ versus the higher lows in the MFI is an indication that the downtrend is losing momentum.

The correlation between the negative sentiment readings, the various support/trendlines, and this Positive Divergence lends validity to the notion that a bottom may be near.

The previous cycle low and the surge that ensued

Back in late 2018 / early 2019, wanting to highlight the re-rating potential I suspected might unfold, I set out to write a series of roundup pieces for Equity Guru.

It was hard work, but it was a rewarding undertaking. The timing was good as many of the companies I featured went on to rack up significant gains in the weeks and months that followed.

Blackrock, highlighted in these pages on March 6th, 2019 in a roundup titled Gold opportunities in the mother of all mining jurisdictions: 21 Nevada ExplorerCo’s for your consideration, climbed from its lowly sub-nickel ($0.04) pre-Andrew Pollard price levels to a high of $1.60 a year and a half later.

Blackrock was a classic setup. $1k invested immediately prior to CEO Pollard taking control of the Company could have fetched up to $40k within 15 months—proof positive that management matters in this wild-west of an arena.

ELY delivered a significant exit and a potential 750% gain earlier this year when the Company dropped the following headline:

“Under the terms of the Agreement, which was negotiated at arms-length, each holder of Ely Shares will have the option to receive consideration per Ely Share of either: (i) C$1.46 in cash, or (ii) 0.2450 of a GRC common share (“GRC Share”), subject to pro-ration based on a maximum aggregate cash consideration of C$84 million and a maximum aggregate number of GRC Shares issued of approximately 41.5 million.”

It’s a beautiful thing when your company has an endgame—when a resource-hungry (royalty-hungry) predator comes along and takes out your position at a fat premium. A beautiful thing indeed.

Corvus, featured in this Nevada roundup at $1.99, dropped the following headline a few weeks back concerning its North Bullfrog and Mother Lode projects in southwestern Nevada:

An all-cash offer representing a 100%-plus (potential) gain for recognizing undervalued ounces-in-the-ground… not too shabby. A solid case for ‘being right and sitting tight.’

This transaction has yet to close. This may not be the end of the Corvus story.

Great Bear was first brought to your attention back in January of 2019 at $2.03 in a piece titled Gold opportunities in the Abitibi Greenstone Belt: 13 dirt-cheap ExplorerCo’s for your consideration

The current $13.70 share price doesn’t reflect the April 2021 spinout of a 2% NSR on their flagship project—Great Bear Royalties Corp (GBRR.V)—currently worth an additional $1.10-plus for each share of GBR held.

Great Bear is another compelling example of the potential for value creation in this high-risk/high-reward arena.

This trio was first featured in these pages on March 29th, 2019 in a piece titled BC’s prolific Golden Triangle: a selection of ExplorerCo’s for your consideration (Part I)

Hailed as the newest addition to the “string of pearls” in the prolific Golden Triangle of northwestern British Columbia, the 24 million ounce Treaty Creek Property is held 60% by Tudor, 20% by Teuton, and 20% by American Creek.

Teuton Resources (TUO.V) was trading at $0.20 when it was first featured here (20-bagger-plus potential on this one)…

For those new to the Treaty Creek story, Lawrence Roulston published a very decent update a few days back:

Eskay Mining was also featured in this Golden Triangle roundup… at $0.095.

Some believe that Eskay Mining’s subsurface layers will prove richer than the original Eskay Creek deposit.

For those unfamiliar with the original Eskay Creek deposit, it was THE highest-grade gold producer on the planet back in its day. It had no equal. After a fierce bidding war, the mine went on to produce 3.3 million ounces of gold at 45 g/t and 160 million ounces of silver at 2224 g/t—a truly magnificent orebody.

Benchmark, featured in this Gldn-Tri roundup at $0.195, is now changing hands at roughly $1.10 after retreating from a high of $1.64 earlier this summer. The Company is looking to fast-track its Lawyers Gold-Silver project to production.

GTT, featured at $0.90 in this March 2019 Golden Triangle piece, was taken out by resource-hungry Newmont Corp at a fat premium earlier this year.

“The Arrangement was approved by GT Gold’s shareholders at a special meeting held on May 6, 2021, and by the Supreme Court of British Columbia on May 10, 2021. Under the terms of the Arrangement, shareholders of GT Gold (other than Newmont and its affiliates), will receive C$3.25 per GT Gold common share in cash.”

In a roundup titled BC’s prolific Golden Triangle: a selection of ExplorerCo’s for your consideration (Part 2) published on April 1st, 2019, I featured Skeena at a post-consolidation price of $1.76 (recent high = $16.49)…

Skeena is another company whose days may be numbered. After releasing a highly anticipated PFS on July 22nd boasting an after-tax NPV(5%) of C$1.4 billion and a 56% IRR (price inputs = $1,550 Au and $22 Ag)… there’s a lot to appreciate here.

Its goal of producing 500k ounces per annum would rank Eskay Creek among those rare Tier 1 deposits, the most highly sought-after asset in the mining arena.

Of course, these roundup picks were not all home runs. Harte Gold (HRT.TO), a burgeoning producer featured at $0.365 in a piece titled Gold opportunities in the Abitibi Greenstone Belt: an UPDATE on our list of dirt-cheap ExplorerCo’s, currently trades at a nickel…

… a clear demonstration of the risks associated with any advanced stage junior determined to go it alone—attempting to put an orebody into production without an assist from a well-heeled producer.

The purpose of highlighting the above success stories is to demonstrate the enormous potential underpinning this high-risk/high-reward arena.
That potential is amplified when sentiment is in the crapper and share prices are driven down to extremes.
But with the very real threat of continued market volatility, it makes sense to keep some powder dry. If general equities break down in a big way and gold stocks get taken down with them, extraordinary bargains will emerge, perhaps similar to those witnessed in late 2018 / early 2019.
Even without a broad market sell-off, if these explorers/developers fail to stage a rally over the next month or so, year-end tax-loss selling could exact a toll as many are pressing their 52-week lows after being cut in half in recent weeks/months. Dry powder would prove useful here too (big understatement).
In part 2, I plan to trot out some of the companies I’m following closely right now.

Full disclosure: None of the companies featured above are Equity Guru marketing clients.