For gold investors, this is a non-event.

Neither Trump nor Biden will have any significant effect on the medium or long-term price of gold.

The forces pushing gold higher are bigger than these two men (one an ass-clown, the other past his due date).

Gold is priced in U.S. dollars. When the U.S. dollar weakens – gold goes up.

Historically, when the spot price of gold goes up, junior explorers explode to the upside.

Conversely, when the spot price of gold swoons, the juniors typically slump in unison.

Occasionally, a precious metal junior will buck the trend – the share price will keep appreciating despite the inclement weather.

Sentinel Resources (SNL.C) is an example of such a company. 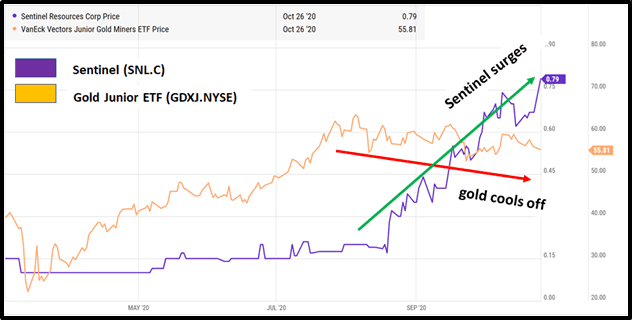 Why does the SNL share-price continue to defy gravity?

Because they’re sticking to their “guiding principles” making good deals – and aggressively advancing the exploration properties.

Today’s news is a case in point.

The review was prepared by Dr. Peter Pollard, Director and Chief Geologist of Sentinel, and Dr. Christopher Wilson, senior advisor to Sentinel.

“A first pass review of available historic data for the Gold Projects indicates that Alliance Reef and Wittagoona Reef on the Peel-Manning fault system, and Toolom South in the Mount Carrington gold camp, host extremely robust exploration targets,” states SNL, “The licenses are located within the New England Orogenic Terrane”. 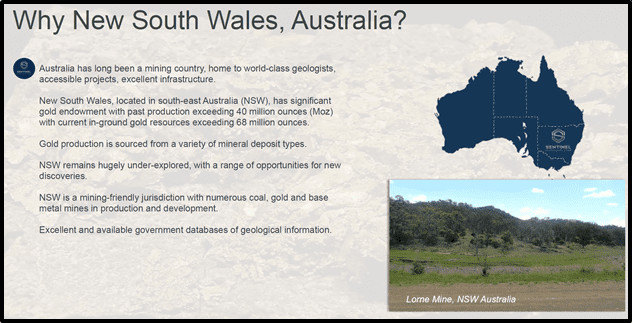 “In a short period of time, our seasoned exploration team has completed a review and analysis of our highly prospective gold projects in New South Wales,” stated Rob Gamley, CEO of Sentinel on October 26, 2020, “Our focus will now be to immediately carry out exploration work on the Peel-Manning fault system due to the potential for listwanite hosted gold.  We are excited with the potential of these two exploration licenses.”

With only 18 million shares out, the company still has a market cap under $15 million.