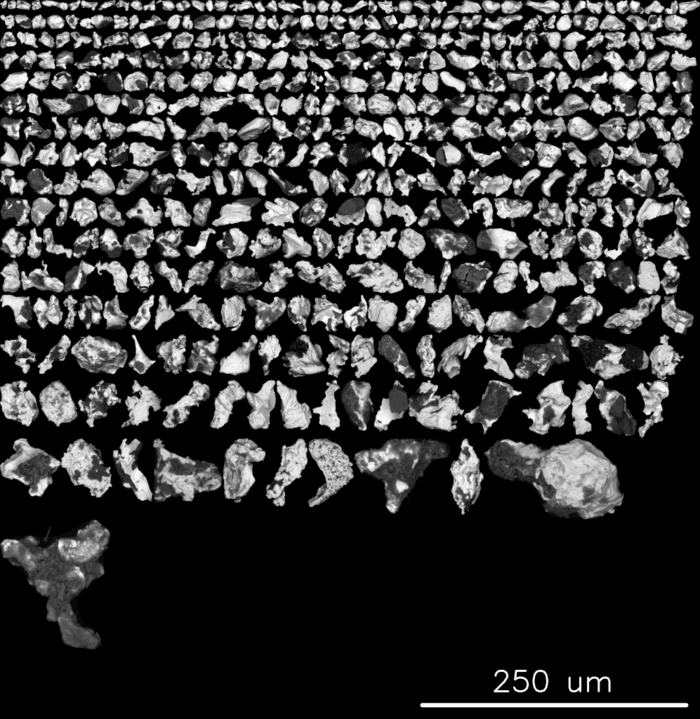 Delta Resources (DLTA.V) has two properties in its project pipeline worthy of flagship status—Delta-1 and Delta-2.

Earlier in March, the Company tagged a high-grade gold discovery at its 16,400-hectare Delta-2 project, one it intends to follow-up with an aggressive campaign with the drill bit… 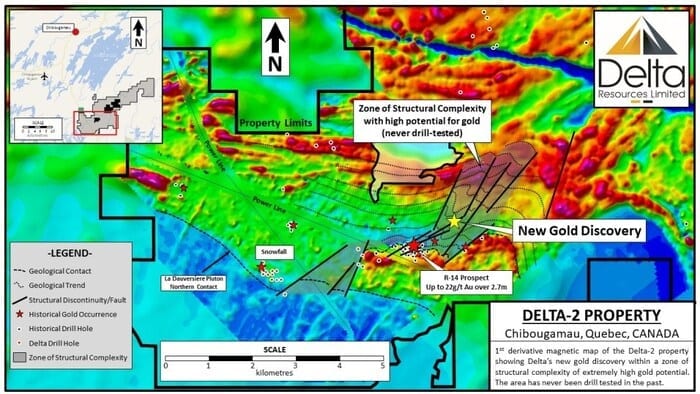 Delta-2 will be generating significant newsflow over the balance of 2021, both for its magmatic-hydrothermal gold potential at one end of the property, and its VMS potential at the other end.

The Company’s 4,495-hectare Delta-1 project in the Thunder Bay region of Ontario also has the potential to deliver a significant gold discovery.

Access is an important consideration when sizing up an exploration play. If the area is remote and lacks a proper network of roads throughout, helicopter hours and Jet-A fuel can blow through an exploration budget in no time. 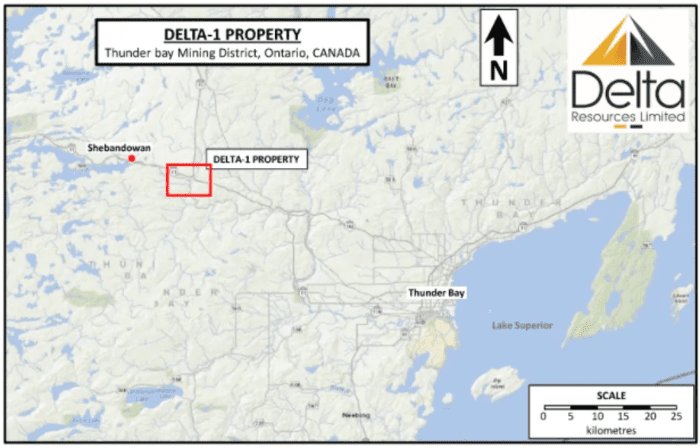 You get to Delta-1 by traveling west from Thunder Bay on the Trans-Canada highway. Advantageously, the property straddles the Trans-Canada for 16 kilometers and can be further accessed by a series of logging roads that have been pushed into the region.

It’s possible that a significant discovery could ultimately lie directly underneath the Trans Cda highway itself (Delta has secured an encroachment permit that allows it to drill adjacent to and underneath this major roadway).

More specifically, Delta-1 is located in the Shebandowan Greenstone Belt and covers 17-kilometers of strike along the Shebandowan Structural Zone, host to Wesdome’s (WDO.T) low-grade—high-tonnage Moss Lake gold deposit 50 kilometers to the west.

The volcanic-sedimentary units of this belt are bounded by granitic terrain to the south, and the Quetico subprovince to the north.

The Eureka discovery, with its pervasive alteration, is what first attracted Delta management to Delta-1. 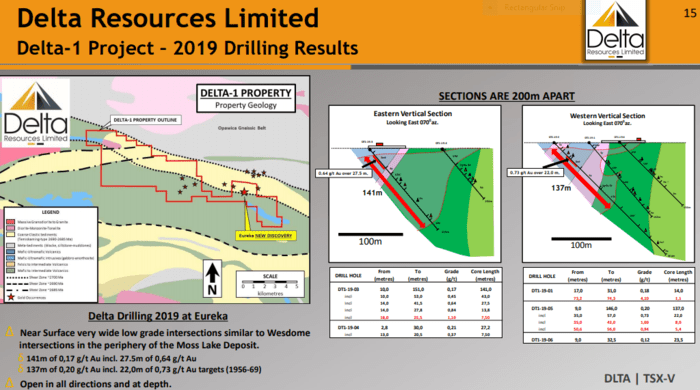 The property straddles the Shebandowan structure (follow the black dots – map below), and like the Cadillac Break in the Abitibi, it’s a structure that separates large geological domains—a deep-seated structure that transferred a large volume of fluid from deep down. As noted further up the page, the Moss Lake deposit— roughly 2 million ounces of near-surface 1.1 g/t gold— is located along the same structure. 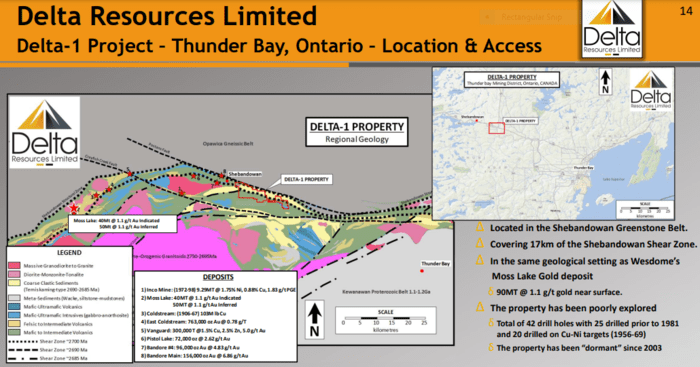 One of the more intriguing features of Delta-1 lies in its immediate subsurface layers. Gold grain counts from a till sampling campaign released last summer open all kinds of discovery possibilities—the numbers are compelling.

Eight of the samples returned between 41 and 457 gold grains (on a normalized 10kg fraction-size sample), with pristine grains accounting for 78% to 99% of the total grains encountered.

In a December 2020 Guru offering, I noted the following… 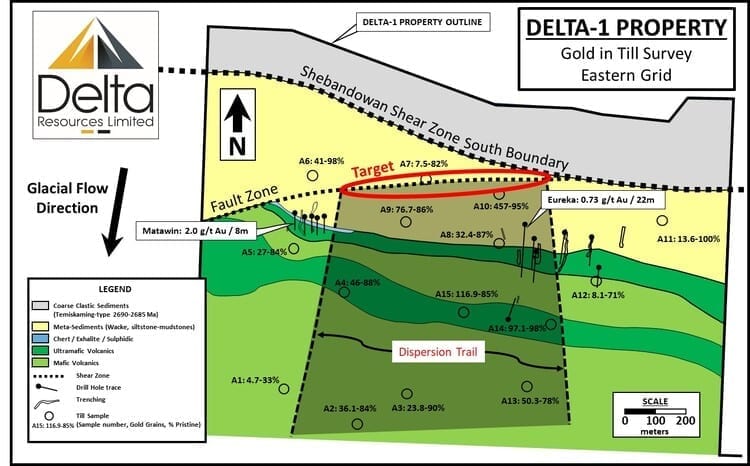 Yesterday, March 11th, the Company released results from a Phase-2 till sampling campaign carried out on the property last October.

Delta Till Survey Confirms the Source of Gold at Delta-1, Thunder Bay, Ontario

This is a bold headline, but it’s supported by good science—the fulfillment of a thorough and methodical sampling campaign.

As previously reported in a press release dated August 12, 2020, a preliminary till survey in the Eureka area of the Delta-1 property outlined a gold dispersion trail that pointed to a source of gold believed to coincide with a one-kilometre-long segment of the Shebandowan Shear Zone. The most recent gold in till survey completed by Delta in October 2020, confirms that the source of gold from that dispersion trail is located on the Delta-1 property.

Highlights from this till sampling survey:

During the preliminary survey, carried out during the summer of 2020, gold grains were recovered from every till sample with eight samples returning between 41 and 457 gold grains (on a normalized 10kg fraction-size sample). With pristine grains accounting for 78% to 99% of the total gold grains. The pristine character of the gold grains indicates that there has been very little transport and hence these samples are interpreted to be proximal to a bedrock source for the gold. One sample from the October 2020 survey extends the dispersion trail to the east by approximately 250m with a count of 234 gold grains with 91% pristine grains (on a normalized 10kg fraction-size sample).

Narrowing things down and homing in on the source of these pristine grains took on considerable weight in this Phase-2 campaign.

To confirm suspicions that the source of all these pristine grains lay on Company ground, field crews collected four samples along the very northern limit of the property—north of the Eureka Gold Occurrence and north of the gold dispersion trail (map below). 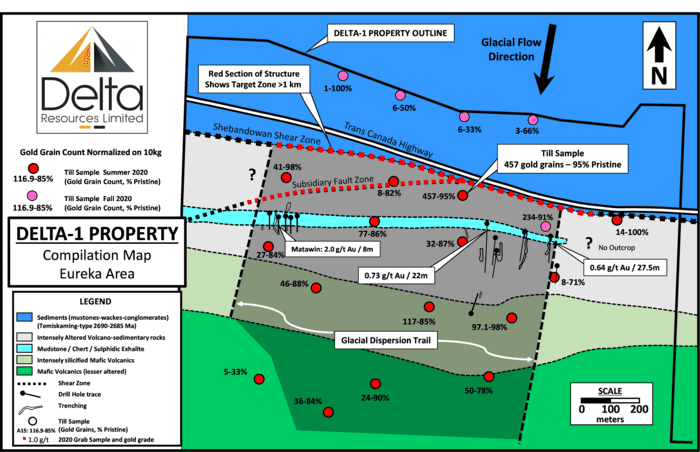 A tip of the hat to this crew. This was some fine geological sleuthing.

With large concentrations of pristine gold grains located along the gold dispersion trail to the south, and negligible gold grain counts along the northern boundary, the Company has effectively encircled the source and defined the limits.

The source has to be on Delta-1 ground.

This press release goes on to state…

These results further support the Shebandowan Structure as a target, immediately south of or underneath the Trans-Canada highway.

Delta has already secured the encroachment permit that allows us to drill adjacent to and underneath the Trans- Canada Highway. The permit is valid until November 2021 however, Delta is currently planning to begin drilling this target as soon as a drill becomes available.

“All the geological evidence we have collected so far at the Eureka Gold occurrence at Delta-1 point to the Shebandowan Shear Zone north from our 2019 drilling program and now our till survey confirms the source to be on the Delta ground. This has developed into a truly fantastic target for Delta and we are enthusiastically looking forward to drilling this target.”

I can’t wait to see a rig mobilized to the project either.

The only thing holding things back at Delta-1 is a lack of available drill rigs in the region. The Company is currently reaching out to drilling contractors and we should see progress on that front soon.

Additionally, the Company is set to receive $1.3M in scaled payments before September 2021—proceeds stemming from the sale of a non-core asset in 2020.