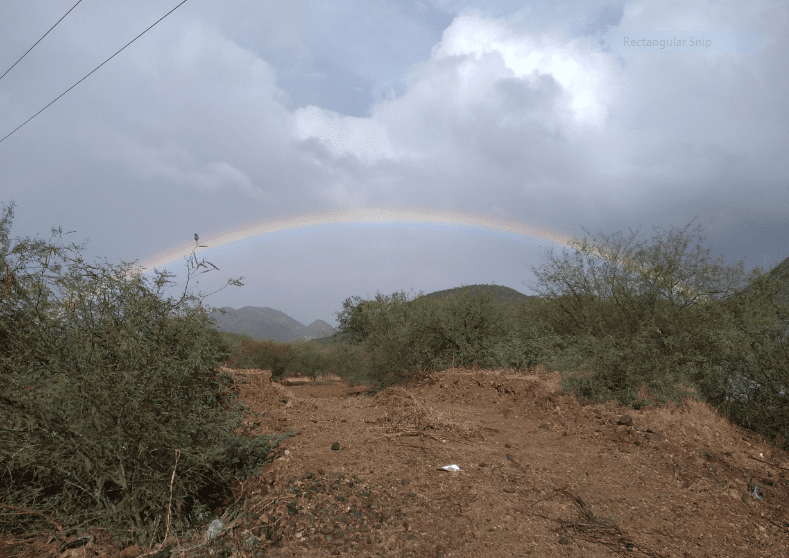 As gold encounters significant resistance at $1800 and the Fed lets slip that higher interest rates may loom on the horizon, short-term price moves are nearly impossible to predict.

Early in the session on May 4th, U.S. Treasury Secretary, Janet Yellen, voiced her apparent preference to pre-empt inflation before the threat turns real, stating, “it may be that interest rates will have to rise somewhat to make sure our economy doesn’t overheat.” 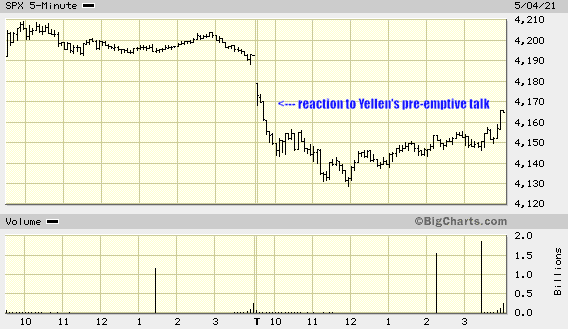 Later in the session, Yellen qualified her earlier comments stating, “It’s not something I’m predicting or recommending.”

If the Fed is truly, secretly worried about inflation—worried that it may be more than a “transitory” phenomenon—the Fed can chill. It’s already in the pipeline. The price pressure is real.

With lumber, copper, and base metals tagging significant highs in recent sessions—lumber prices are smashing historic records (copper is a hair’s breadth from all-time highs)—this inflation is very real.

Lumber. I used to be in lumber, well… trees, back when I was a silviculture contractor on the wild West Coast of B.C., but my focus nowadays is on those probing our planet’s subsurface stratum for muchly sought-after resources (Peak Gold, M&A n all).

One would think that the vast majority of high-quality companies in the junior exploration arena would be marking multi-year highs at this juncture. True, some are tagging their price chart highs (I could trot out a few names if pressed), but the vast majority are currently trading sideways to down. This represents an opportunity IMO.

Briefly, a few crisp notes on this highly prospective ExploreCo…

The Company is actively exploring two highly prospective gold and base metal projects in Canada: 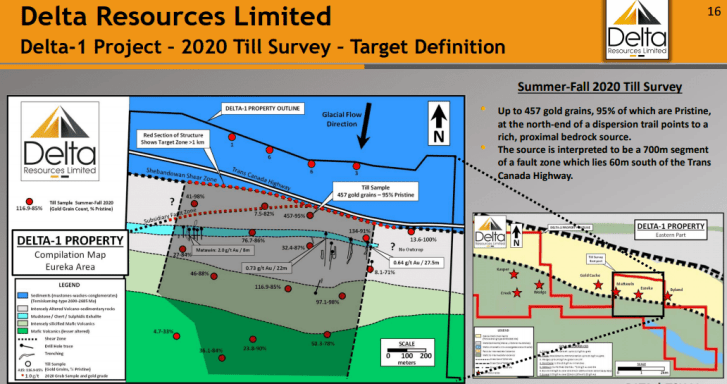 Slide 16 on the Company’s pitch deck 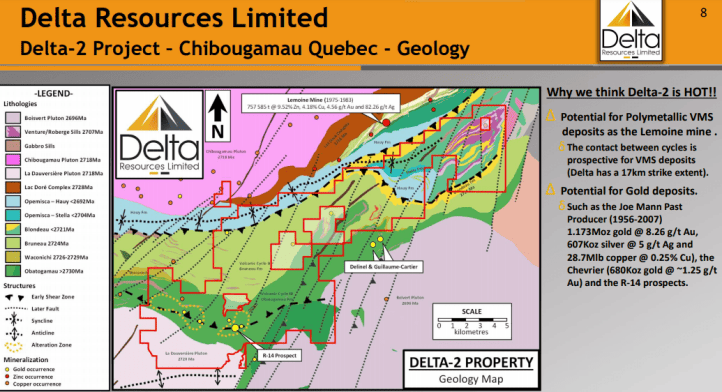 Slide 8 on the Company’s pitch deck

For a deeper delve into Delta’s fundamentals, the following link will help bring you up to speed:

In the early morning hours of May 4th, Delta dropped the following headline:

Here, the Company announced the completion of a program at Delta-1 where eight holes were drilled for a total of 1,376 meters.

The drill bit was aimed at a kilometer-long zone interpreted as the source of a gold dispersion trail, one that returned some rather impressive gold grain counts—up to 457 grains per 10 kilogram sample (see press release dated March 11, 2021, and August 12, 2020).

Two till surveys, carried out during the summer and fall of 2020, defined a gold grain dispersion trail of one kilometre in the east-west direction and at least one kilometre in the north-south direction, that remains open towards the south. The gold dispersion trail appears to end abruptly at the Shebandowan Shear Zone; believed to be the bedrock source of the gold grains. Within the dispersion trail, 12 of 13 till samples returned between 41 and 457 gold grains (on a normalized 10kg fraction-size sample). With pristine grains accounting for 78% to 99% of the total gold grains. The pristine character of the gold grains indicates that there has been very little transport and hence these samples are interpreted to be proximal to a bedrock source for the gold.

The following map shows the drill hole locations. Note the proximity of the Trans Cda Highway—every project should be this access-rich. 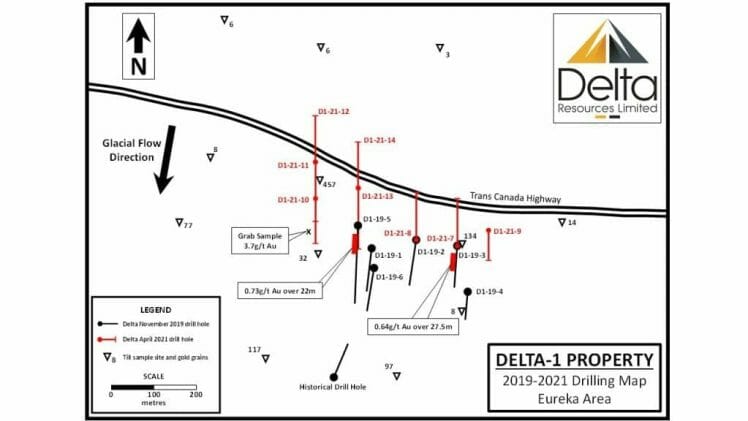 Drill holes D1-21-07, 09, 10, 11 and 13 all intersected an intense zone of alteration consisting of silica flooding, ankerite, calcite, chlorite and fuschite, all associated with disseminated pyrite and chalcopyrite, along with several generations of quartz-calcite-ankerite-pyrite veinlets, stockworks and breccias. The alteration zone was intersected over a strike length of 400 metres and to a depth of up to 130 metres and varies in width from seven to forty-six metres. This intense alteration zone was not intersected during the 2019 drill program and appears to occur down-dip from the 2019 gold intercepts of drill holes D1-19-05 (0.73 g/t Au over 22m) and D1-19-03 (0.64 g/t over 27.5m). It is unclear at this point if this alteration and veinlet zone is the source of the high gold-in-till anomaly, however it seems like reasonable geological assumption at this stage.

Assays are pending and are expected over the next four to six weeks.

Expectations are high with such rich geochemistry (and pervasive alteration) underpinning this fat target.

“Although we weren’t able to drill all the drill holes we had planned to due to high water levels, we’re really happy with the outcome of this program so far. The intensity and extent of the alteration is very impressive and unexpected. Now we anxiously await the assay results.”

The following Youtube vid features CEO Tessier updating us on all three drill programs—Delta-1, Delta-2 Gold, and Delta-2 VMS—projects that will see more meters drilled in 2021.

Three zones of mineralization—the Main Zone, North Hill, and 4-Trench—have been identified in the northwest part of the property from historic surface work and drilling. 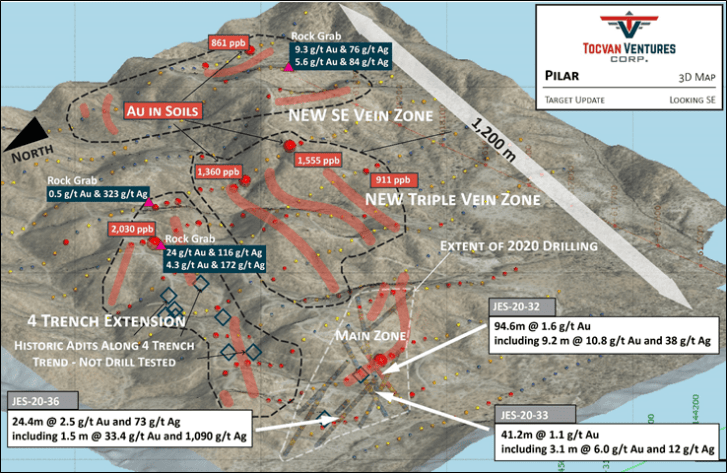 Structural features and mineralized zones within the structures follow an overall NW-SE trend of mineralization.

Over 19,200 meters of drilling have probed the projects subsurface layers to date:

Notable highlights from a 2020 Phase-I RC drilling campaign include (all lengths are drilled thicknesses):

Notable highlights from 17,700 meters of historic Core & RC drilling include:

For a deeper delve into Tocan and the positive fundamentals underpinning this tightly run ExploreCo, the following link will assist:

In the late evening hours of May 3rd, Tocavan dropped the following headline:

In this press release, the Company announced results from ongoing metallurgical work at its flagship project.

Ask any mining man (or woman) and they’ll tell you that metallurgy—the science of extracting valuable metals from their ores and modifying said metals for their intended use—trumps all other considerations.

Responsible and competent management teams in this space prioritize met studies as a project is drilled and pushed further along the curve—it’s a defining characteristic (metallurgy can trump all other considerations… after all).

Here, preliminary results have been received from two composite samples taken from (recently reported) drill hole JES-20-32—94.6-meters at 1.6 g/t Au including 9.2 meters at 10.8 g/t Au and 38 g/t Ag from 57.9 to 152.5 meters—an intercept thought to be representative of the central portion of the Main Zone (image below). 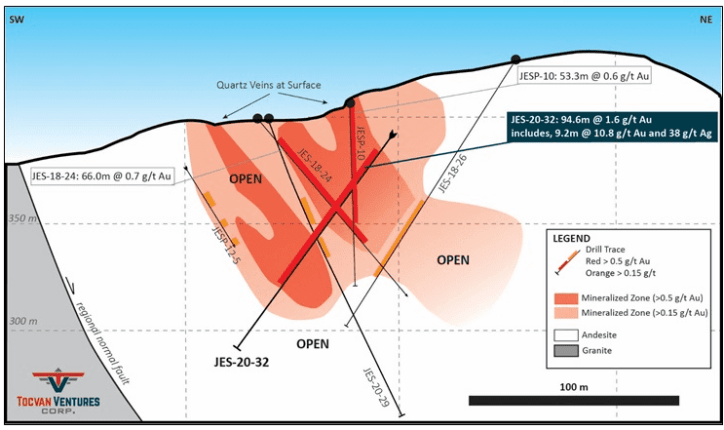 The samples consisted of a low-grade (0.63 g/t Au) and a medium-grade (1.2 g/t Au) composite to determine the susceptibility of dissolution of gold through cyanide bottle testing. The results show after a retention time of 48 hours, maximum dissolution can be reached of 91% for the low-grade composite and 92% for the medium-grade composite. A summary of the results are provided in Table 1 (below). Samples were submitted to SGS Laboratories in Durango, Mexico for analysis.

Recovery rates in the 90% range could generate some compelling economics for the Pilar project in the months ahead.

“These results are an important first step as we move towards a bulk sample at Pilar. The results align with analysis completed by past operators which displayed similar gold recoveries of 90 to 92%. With our Phase II drill program well underway we will continue to evaluate the potential of Pilar with continued exploration and metallurgical studies leading towards a bulk sample later this year.”

This reference to an upcoming bulk sampling campaign opens up all kinds of (non-dilutive) possibilities as the Company pushes Pilar further along the development curve.

A Phase II drilling campaign is well underway where a minimum of 14 drill holes (roughly 2,400 meters) are planned.

Eight holes have been completed for a total of 1,394 meters thus far.

Samples for the first three holes have been submitted to ALS Labs in Hermosillo, with the remaining holes expected to be shipped and submitted this week. Early drilling has focused on the extension of the Main Zone. Drill targeting is now shifting towards testing new targets in the 4-Trench Extension, North-Hill and Triple Vein Zone areas.

In mid-May, a second stage 1,600 meter campaign will follow-up on initial results and will test additional high-priority targets property-wide.

The market has gained an appreciation of the Company and its flagship project. 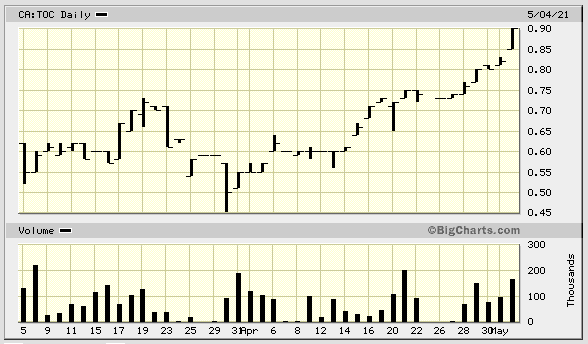 This positive price trajectory is also made possible by management keeping its share structure tight… super tight in this case.

The following Youtube vid offers a very good sense of Pilar’s lay. Note the gentle topography—a huge plus in any mine development scenario…

Both Tocvan and Delta will be generating robust newsflow over the balance of 2021.

Full disclosure: Both Tocvan and Delta are Equity Guru marketing clients. We own stock. 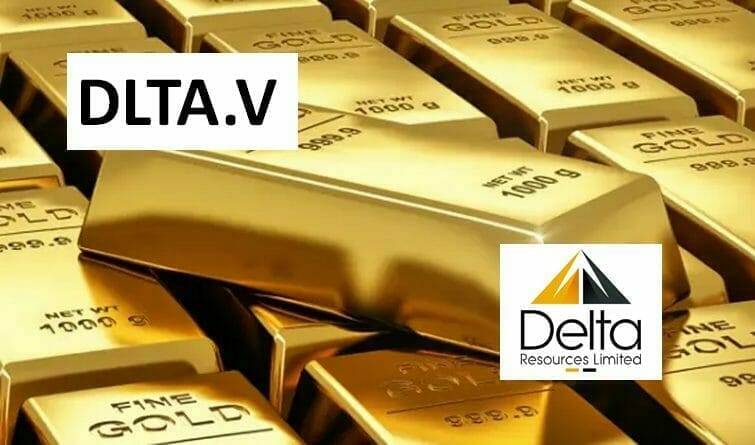 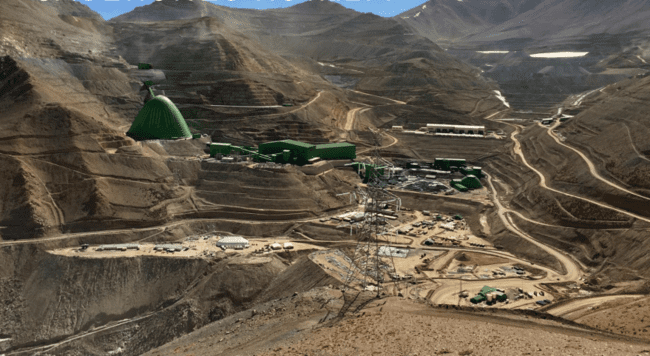 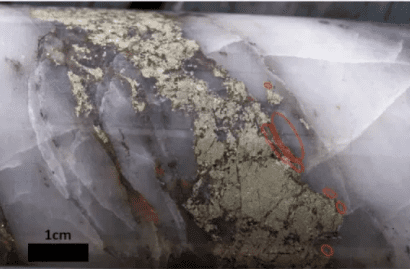 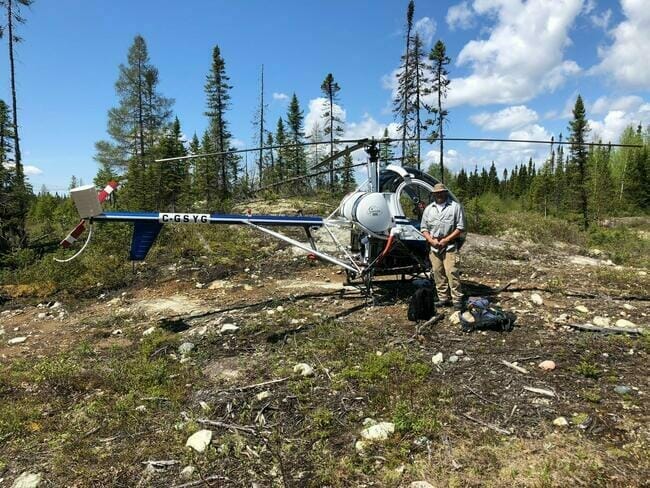 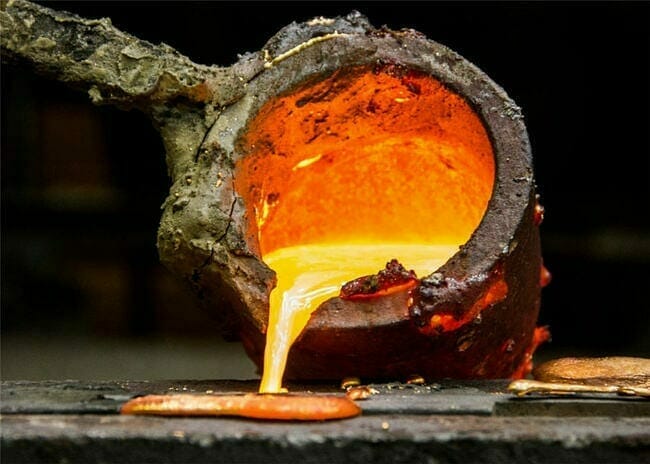