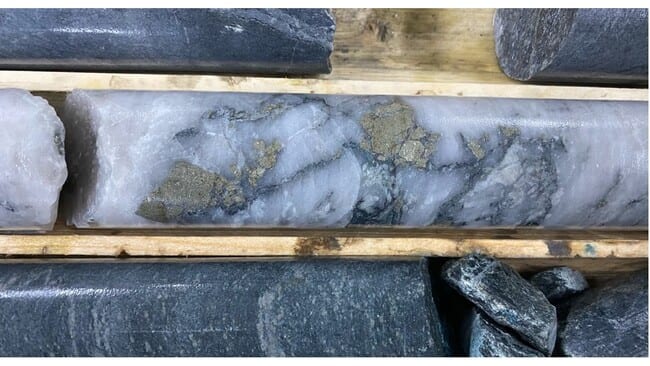 Today, Delta Resources (DLTA.V) announced a high-grade discovery at its Delta-2 project, a 16,400-hectare chunk of highly prospective terra firma located along the northeast end of the Abitibi Volcanic Belt, just to the southeast of Chibougamau. 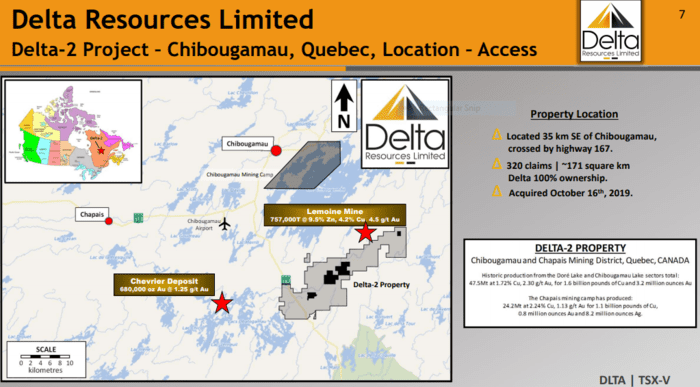 The discovery headline – the values – the details

These high-grade vein-type discoveries can be elusive. Back in November and December of 2020, the Company drilled 20 drill holes (3425 meters) aimed at the hydrothermal-gold potential of the area. On January 11th of this year, the Company stated, “preliminary results have been received for the first 13 drill holes and there are no significant results to report.”

This press release went on to state that today’s gold discovery was tagged in the last two drill holes of the program.

Without a doubt, we have geological sleuths at work here.

This new discovery was made while testing the extensions of the Due Diligence Au Occurrence, a showing discovered during a 2019 prospecting campaign.

Grab samples with grades up to 55.8 g/t gold and channel samples returning up to 22.97 g/t gold over 25 centimeters define the Due Diligence occurrence (details in an October 26, 2020 press release).

“Two drill holes were completed 125 meters SW of the surface occurrence. Two mineralized zones were encountered, and visible gold was identified in both zones and in both drill holes. Because of the significance of this new discovery, Delta instructed the labs at SGS Canada to expedite the assay process. Drilling now suggests
multiple mineralized zones.” 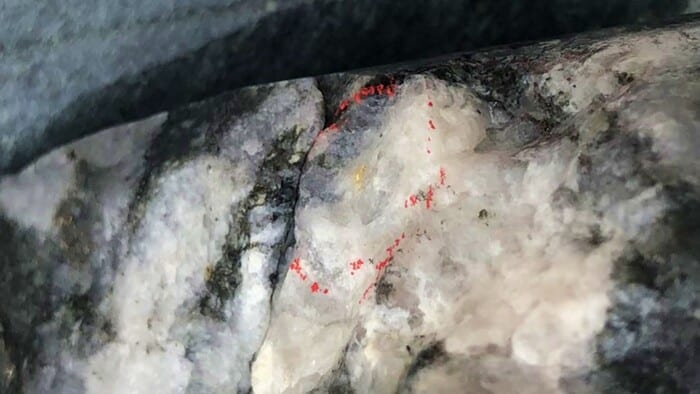 “This new high-grade gold discovery is significant for Delta, especially considering it’s located in a completely new area within the core of the Delta-2 property and thereby allowing for future expansion. The new discovery opens a never tested NE-trending corridor favourable to gold mineralization that spans over five kilometres on the Delta-2 property. Delta is planning to focus on this new sector of the property in the coming months, as new drill permits have been received, while in parallel, continue to systematically drill the numerous gold-rich VMS targets Delta has identified.”

“Drill holes 28 and 29 were drilled at 270 degrees azimuth and inclined respectively at -45 degrees and -60 degrees. Both holes have intersected numerous types of quartz veins, but gold mineralization seems to be associated with strongly deformed quartz veins with tourmaline at their margins, and larger quartz veins with disseminated to centimetric masses of sulphides (pyrite, chalcopyrite and sphalerite). Both vein-types also contain visible gold. Additional drilling will be necessary to better define the geometry of the mineralized system.”

Delta stated that many geophysical and structural targets remain to be tested in the immediate area of this new discovery—extensions of the new mineralized zone and further along the northeast-trending corridor.

With drill permits in hand, the Company intends to systematically test these targets in the coming months.

Exploration completed on the property to date—fieldwork, diamond drilling, and geophysics—have defined a NE-trending corridor of structural complexity that extends from the Snowfall Gold Occurrence to well beyond this new gold discovery to the NE. As noted above, the dimensions of this corridor measure five kilometers in length by 1.5 kilometers in width.

The map below shows the geophysical features from a magnetic survey over the southern portion of the property. Note the discovery zone (yellow star). Note the darken areas over the magnetic survey and the black lines that extend to the southwest of the R-14 prospect, and to the north of this new discovery. Noting the scale on this map (bottom center), will give you a sense of the exploration upside here (once again… a five-kilometer long by 1.5-kilometer wide structural corridor). 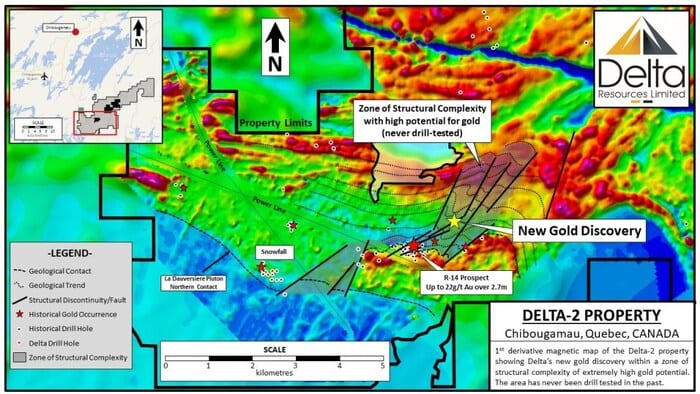 Aside from a few cursory pokes at the R-14 prospect (up to 22 g/t Au over 2.7 meters) and the two intercepts released today, this is largely untested ground.

The core of this 16,400-hectare property and has never received a proper probe with the drill bit.

These drill hits may represent the very early innings of a significant discovery cycle, one that is about to ramp up with a Phase-2 drilling campaign.

The Company has 10,000 meters of drilling in mind to test the immediate vicinity of this new discovery zone and the regional potential of this large structural corridor.

If this next phase of drilling tags additional discoveries along this corridor, we could see an acceleration in activity via the mobilization of additional drill rigs—this area of the Delta-2 property can be drilled year-round.

“The new discovery occurs in a NE-trending corridor of structural complexity where volcanic stratigraphy has been disrupted and deformed. Magmatic-hydrothermal gold mineralization, intense potassic alteration and at least four generations of felsic to intermediate dykes shown to be associated with the La Dauversiere pluton to the south are also associated within this corridor. The corridor is believed to have been reactivated during subsequent deformation events.”

The following video offers a very good overview of this new discovery, accompanied by some excellent maps and a layman’s interpretation of the geology courtesy of CEO Tessier.

Basically, you have the magmatic-hydrothermal gold potential at one end of the property (to the southwest), and the VMS potential at the other end (more to the northeast). This makes for an interesting combination of targets. 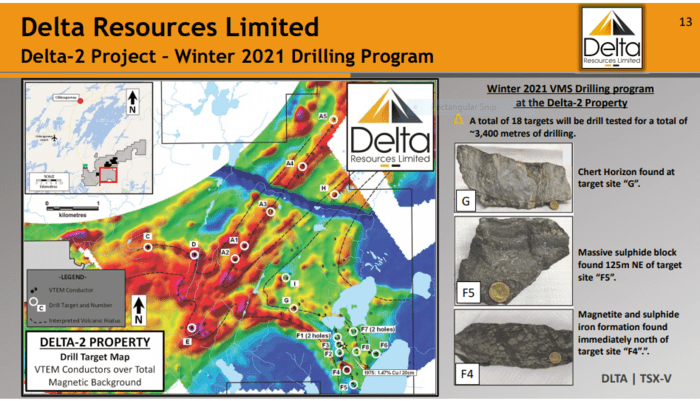 A drilling campaign designed to test this VMS potential has been running simultaneously with the program that tagged today’s discovery.

Regarding the “geological sleuth” characterization near the top of the page…

The Delta team includes Andre Tessier (CEO), and Michele Chapdelaine (VP of Exploration and COO). Both men have solid track records, both are accomplished geologists.

Tessier was a geological consultant with (major and junior) clients in Canada, South-Central America, and Central Asia. I’ve had the pleasure of speaking with CEO Tessier on several occasions. The man knows his rocks.

Chapdelaine was a Sr. supervising geologist for Virginia Gold in the James Bay region of Quebec. He had boots on the ground when the Éléonore deposit was discovered in 2004, during the previous up-cycle in gold. I was well-positioned in Virginia common back then. That’s one event that changed my life.

Importantly, this crew has multiple economic discoveries under their collective belts—discoveries that created significant shareholder value. This—a positive track record—is something every investor should look for in a management team.

Last week, the Fraser Institute, a think-tank that analyses jurisdictional risk, published its most recent survey of mining jurisdictions.

This annual survey is one of the better shortcuts to getting a handle on the “Investment Attractiveness” of a jurisdiction, be it a country, state, or province.

It also serves as a “report card” to governments on the attractiveness of their mining policies.

According to Elmira Aliakbari, director of the Institute’s Centre for Natural Resource Studies:

“The Fraser Institute’s mining survey is the most comprehensive report on government policies that either attract or discourage mining investors.”

Part of the reason for this lofty designation is the forward-thinking “mining-friendly” attitude of the Quebec government. For companies like Delta, the province refunds 40%-plus of all exploration expenditures—a huge incentive to get busy and push development further along the curve.

Another compelling feature of the Company is its share structure. 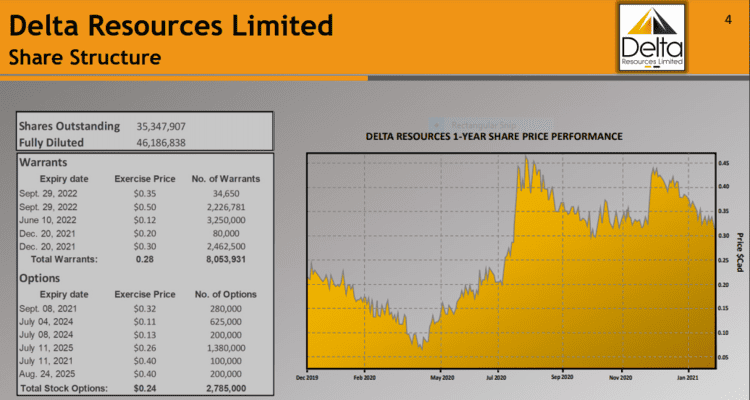 Delta is highly protective of this tight structure and deploys operational strategies to keep it way.

Example: The Company stoked its coffers last year in a deal with Yorkton Ventures involving the monetization of a non-core asset.

To acquire a 100% interest in the Property, Yorkton will cut a cheque to Delta as follows:

(Delta still holds a 1% NSR on this asset and if Yorkton fails to abide by this aggressive payment schedule, Delta gets the entire project back)

$1.7M will buy A LOT of exploration, especially in Quebec.

The Delta-1 property will soon begin adding to the Company’s newsflow.

In my mind, it’s a toss-up between D-1 and D-2—both projects hold significant discovery potential.

Delta-1’s road accessible 4,495 hectares lie in the north-central portion of the Shebandowan greenstone belt, in the Superior structural province of the Canadian Shield. 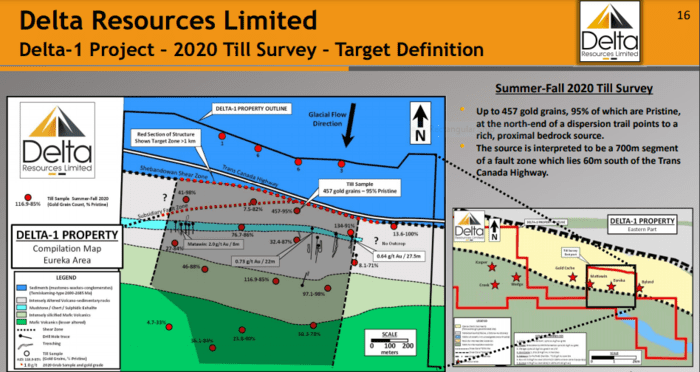 Greater insights into Delta-1 can be gleaned by tapping the following link:

This next video, also released today, is a very good Q & A between Frank Candido and Andre Tessier regarding this recent discovery event, and other aspects of the Delta project portfolio.