The DJIA is now at the same level it was two years ago, although 39 million Americans have lost their jobs and 20% of U.S. renters did not pay their rent this month.

In an effort to stabilize the U.S. economy, the Federal Reserve printed $3.5 trillion in government securities.

On May 15, 2020 the Democratic-led House passed a $3 trillion relief package.  The Republicans won’t pass it, because it squanders a lot of money on poor people who often make irresponsible spending decisions.

The air-line industry received a $25 billion bailout, although there is still a high probability that American Airlines (AAL.NASDAQ) will seek bankruptcy protection.

“I think June doesn’t need to come and go without a phase 4 [stimulus},” stated Mississippi Republican Senator Roger Wicker, referring to the potential next round of aid.

This shit-storm of negative financial news has not stopped retail investors piling into stocks. 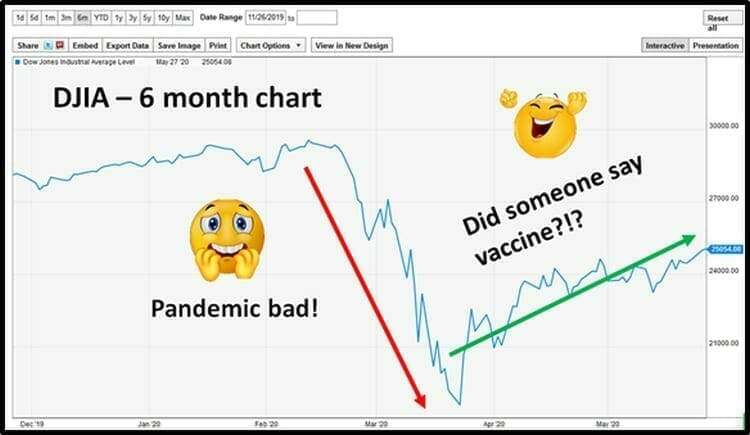 “The lure of snapping up stocks at bargain prices has been too strong to pass up for many people, even as uncertainty over the pandemic clouds the market and global economic outlook,” reported The USA Today.

Stuck at home, but armed with online trading apps, individual investors helped drive the historic comeback for stocks since late March, despite a backdrop of historic job losses, forecasts of sinking corporate profits and a global recession due to the economic fallout from the outbreak.

This year, 610,000 new retail trading accounts opened at the on-line trading platform TD Ameritrade – 300% higher than the same period in 2019.

The buy-sell ratio for the quarter was 1.55, which means for every stock sold, 1.55 stocks were purchased.

“Ms. Lopez points to trading activity in pharmaceutical developer Moderna (MRNA.NASDAQ) as proof that these newbie traders don’t know what they’re doing. On May 18, Moderna’s stock jumped 26% on news that the company’s coronavirus treatment had produced successful results.”

“So many sik (sic) people!” wrote Retireearlyordie in on-line trading chat room, “Modina (sic) has got the cure. Phone on fire. I’m buying a lot!”

Executives at Moderna were less bullish than the new on-line traders.

They quickly sold more than $89 million of stock, reducing their Moderna holdings to close to zero.

It has recently been revealed that Moderna was largely talking out of its ass. 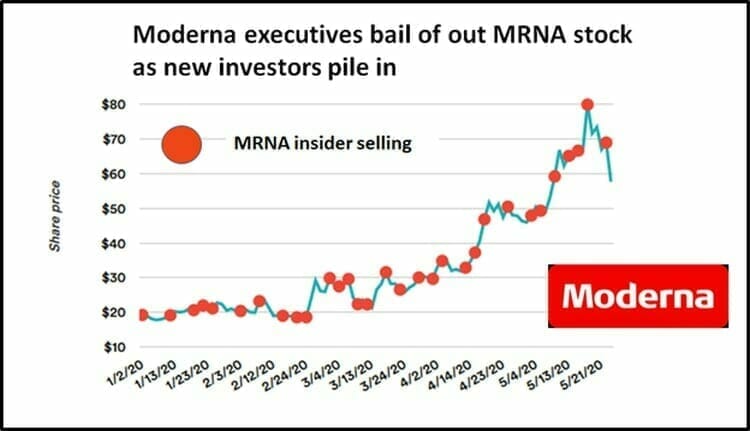 “No one did their homework”, writes Ms. Lopez, ” I have an extremely active subconscious, and I could not have dreamt of a more perfect condition for separating investors from their money if I tried.”

The notion that markets will bounce back quickly from the negative COVID-19 jolt – is not entirely crazy.  Because that’s exactly what happened in 2008, after the collapse of the banking system.  The Fed healed the corporate wounds with printed money, and everything returned to normal.

Is printing money a permanent solution?

Is there a palpable consequence to being pathologically broke?

Each worker owes about $106,000 in personal debt.  Even if no new debt is accrued, 16 million of those indebted Americans are projected to die before they pay off the principal.

“Back in January of this year, we presented a solid case for approaching the broader markets with extreme caution in a piece titled, A “skies the limit” stock market = a house of cards?” stated Equity Guru’s mining wizard Greg Nolan.

“Rarely have the fundamentals underpinning gold been so legion, so well-aligned,” continued Nolan in his Guru shortlist of producing and advanced stage ExploreCos, “The recent and sudden strength in the metal is the product of a surfeit of forces—negative real rates, out of control money printing, debt levels that have taken on a surreal quality…a global economy brought to its knees.”

If you think this party will continue, you can join the army of new on-line traders buying U.S. equities on their cell phones.

If you think the current DJIA rally has a shaky foundation, you may wish to diversify into hard assets like precious metals.