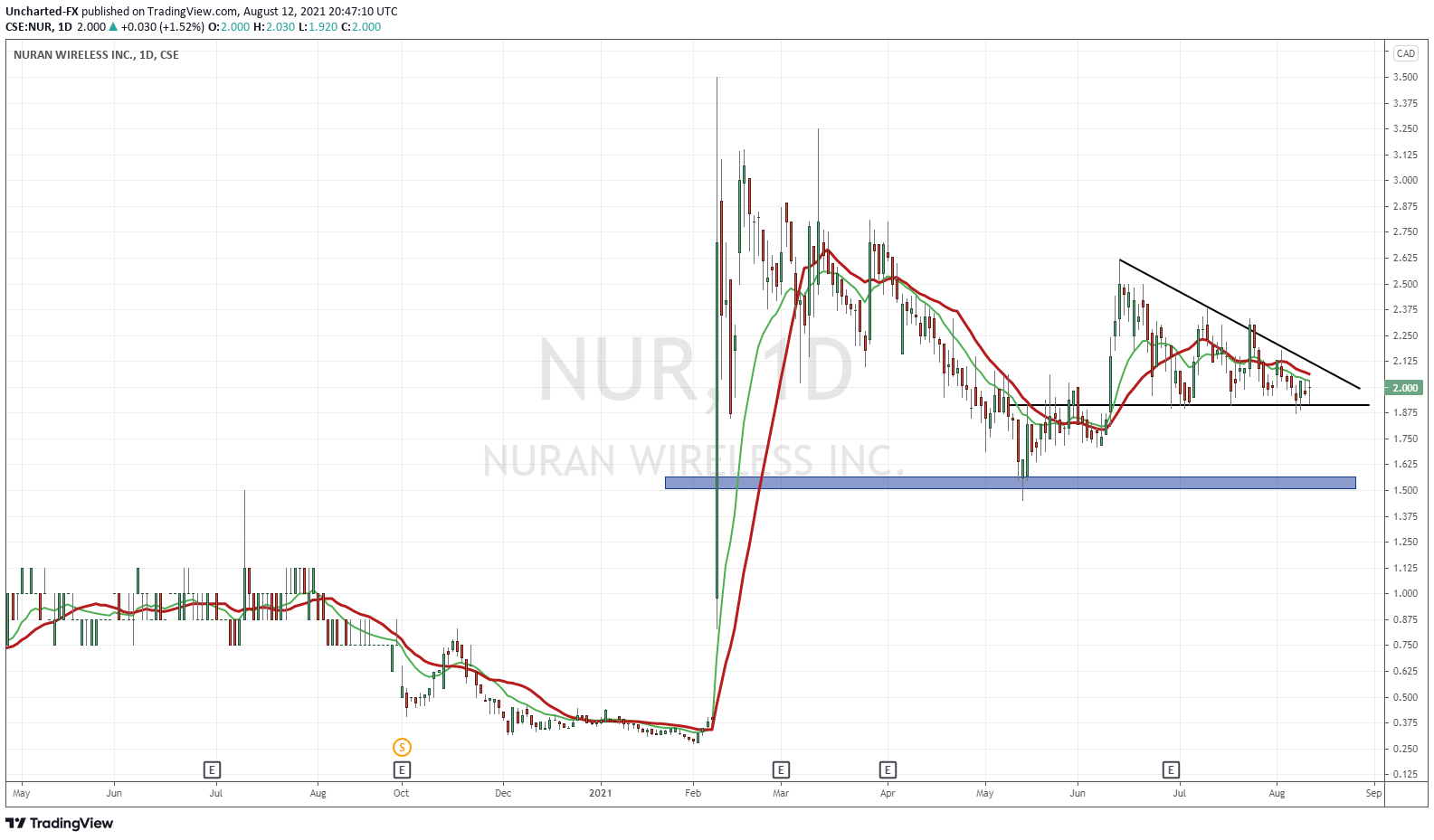 NuRAN Wireless (NUR.C): Can a Catalyst Trigger a Triangle Breakout?

Delivering high-speed broadband internet all over the world is one big goal for Elon Musk. Most people know him for Tesla and Electric Vehicles, SpaceX….and maybe even playing a role in pumping up crypto’s such as Dogecoin, but Starlink isn’t discussed as much. It is Musk’s satellite internet venture. They are currently in their beta stages promising to beam the internet around the world (minus polar regions) by the end of this month, August 2021.

Many eyes are on Starlink, thanks to Elon Musk’s cult of personality, but there are a few Canadian companies to keep your eyes on that are attempting to use satellite technology to help those in rural areas. NuRAN Wireless (NUR.C) is one of them.

NuRAN Wireless is a company located in Quebec with the goal of democratizing access to wireless mobile services and telecommunication. Their goal is to connect billions of people in rural and remote regions to a fast, reliable and expansive wireless network through innovative and affordable solutions by offering millions of people in developing countries the ability to connect to a global network and communicate over long distances efficiently and affordably.

As someone looking to invest, this is great because the company is tackling a problem, finding a solution, and providing value. 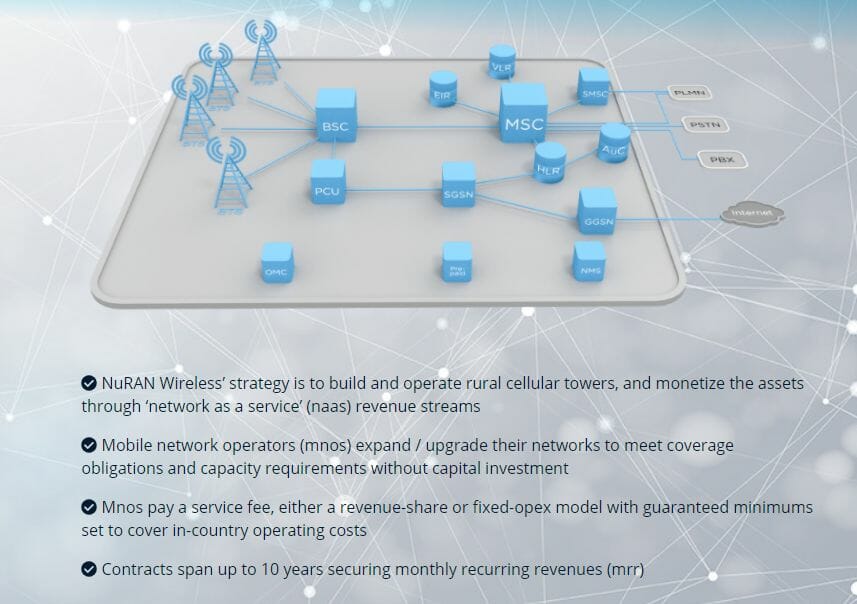 Their products are built with the rural market in mind, meaning top notch performance with low power consumption and minimal backhaul requirements. Here is the link to the page of their 2G-3G-4G products.

Recently NuRAN have announced deals with countries such as Cameroon, the Democratic Republic of Congo, Sierra Leone, Mali, and South Sudan. The deal in the DRC with Orange DRC is estimated to generate revenues of $500 million CAD. Also, a closing of a non-brokered private placement for gross proceeds of $11,065,433 AND a lead order from Spacecom as a strategic partner. Piers Eaton covered the news, and you can read his thoughts and what this means for NuRAN here.

For a breakdown on the fundamentals, be sure to take a look at other NuRAN pieces released today!

What do I think of the stock?

Honestly, I like the technology and the value. But there are a few things I am asking myself. Firstly, Starlink. They are getting their satellite’s up into space. However, a BIG difference in that one is dealing with the wireless internet and the other with telecoms. Could Starlink though do the same thing NuRAN is trying to accomplish with 5G? This is where the value of NuRAN’s products come into play with the lower costs etc. Also some of my fellow colleagues here at Equity Guru think that Elon Musk is all talk when it comes to Starlink.

Most of NuRAN’s contracts and business are done with countries in Africa. When I look into mining, I tend to stay away from what Marin Katusa calls the “AK-47” countries. Usually they have corrupt government and mining deals are held back due to bureaucracy and inefficient government. I assume telecoms would be the same.

Just things to think about going forward. Let’s take a peek at the chart: 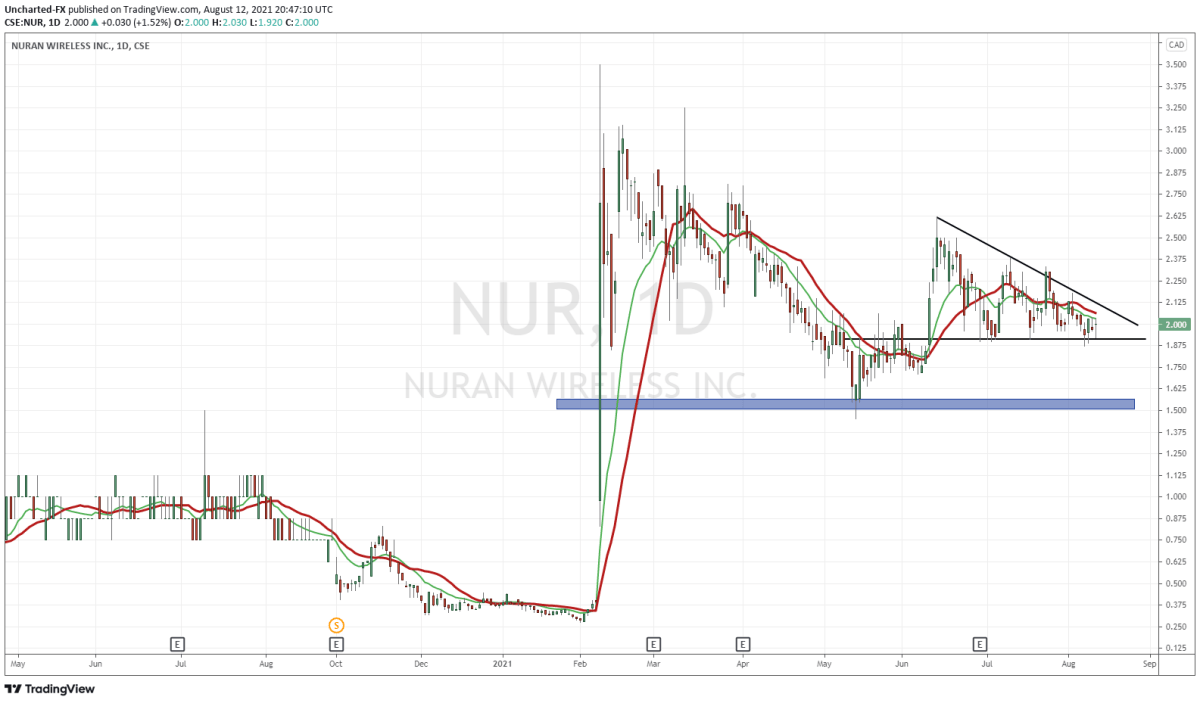 We have a Triangle Forming on NuRAN Wireless.

Look at that big pop and gap up on February 8th/2021. That deal with Orange DRC and the estimated gross revenue of $500 million CAD got the market excited! (Remember, this much estimated revenue for a company with a market cap of $41.13!) Since then, the price has slowly tapered off, only to pop again in June on the private placement news.

We now await a further catalyst for another pop. The market structure is there. I have drawn out what is called a triangle pattern. Pretty self-explanatory on why it is called that. We are coiled and just waiting for a break in either direction. We have support, or a price floor, at around the $1.90 zone. If price breaks below and closes below this level, we will move down to $1.50.

However, if we can get some good news or a catalyst, we can break the downward sloping line of the triangle. That would be very bullish. We would reclaim $2.50, and if there is a strong catalyst rather than just a technical break, we can move back to recent highs above $3.00.

I’ll be keeping my eye on this company. Love the story, love the value and service they provide, and I love the technical chart set up. Those very bullish could accumulate shares now. The opportunity cost however is allocating your money and missing out on other moves if NuRAN wireless continues to range…or break below support and head lower. The breakout of the triangle would be more bullish and has a much higher chance of a continuation move. As a trader, we want to move with momentum. As a long term investor, you will be focusing on the longer term.