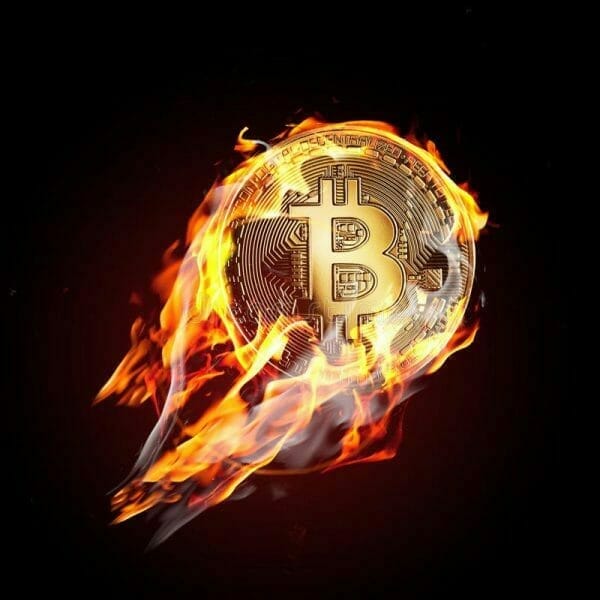 When discussing bitcoin’s growth and shrinkage trajectory, it’s important to make the scope of your arguments definitive. Talking about Bitcoin’s price movements in 2018 in the depths of the crypto-winter and comparing them to today does nobody any good. It’s not just because of the considerable FOMO it inspires, but also because the circumstances surrounding the development, publicity and use-value of cryptoassets are vastly different than in 2018.

For example, we have Marathon Digital Holdings’ (MARA.Q) unaudited Bitcoin production and miner numbers for last month, released today. The numbers are interesting. As of May 1, 2021, Marathon’s mining contingent has brought in 354 newly minted Bitcoins thus far in 2021. The market value of which, at least at the time of writing, is a little under $20 million. Not a bad number for four months of work.

“April was an incredibly productive month as we brought 5,288 new miners online and increased our active mining fleet’s hashrate approximately 82% in just 30 days. As a result, by the end of April, we were producing nearly 7 bitcoins per day, up from 3.2 bitcoins per day at the end of March. New miners continue to be delivered and installed on a daily basis, and as they come online, these production figures will continue to improve as our business scales into one of the largest enterprise Bitcoin mining operations in North America,” said Fred Thiel, Marathon’s CEO.

The total amount of coins in Marathon’s bitcoin’s treasury is approximately 5,292, which includes the 4,812.66 they bought in January at $31,168 per BTC. If you factor in that on May 1, bitcoin hit $57,678, then after a little math, we can discern that the total value of their bitcoin holdings it approximately $305.2 million.

By month, the Company’s bitcoin production was as follows:

It won’t be long and this will be the expected level of scale for every company in the space.

Marathon’s been busy scaling their production for the past six months—developing a collective North America mining pool with DMG Blockchain Solutions (DMGI.V) and generally inflating their hashrate handling capacity to levels (and in places) that give Al Gore cause for concern.

Marathon’s developments at a glance

Most bitcoin miners aren’t there yet. Marathon intends on having all of its miners to be fully installed by the end of Q1, 2022, bringing their total fleet (fleet doesn’t cover it. Try armada) to 103,120 miners, and the total hashrate generated at 10.37 EH/s.

If you’re interested in seeing a visual representation of the trajectory of Bitcoin mining, here it is in chart-form. Specifically, MARA’s one year chart. 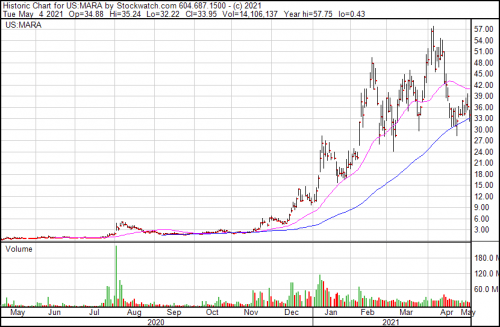 From a sub-three dollar stock to the meteoric climb to $57 and a slight correction to where it closed today at $33.95. The market capitalization for MARA is a curious $3.3 billion. We’ve written about this company in this vein before, and the circumstances still haven’t changed: an atmospheric rise as the company scales, which isn’t reflected in their earnings (or price to earnings ratio of -278.62). But the big question we can only answer over time is whether or not this company will be able to scale and produce enough to justify its market cap.