I suspect we’re in the early stages of a bull market in precious metals, base metals, battery metals, and all things mining—a bull run that will prove epic in scale.

I’ve seen this movie before. It has a rather riveting, albeit volatile plot.

Bolstering this belief, central banks around the globe, in maintaining extremely accommodative monetary policies, are debasing their currencies at a rate that is difficult to fathom.

On this side of the pond, Biden is intent on injecting $1.9 trillion worth of additional stimulus into the US economy—for starters. That’s welcome news to the millions of Americans who desperately need the support, but this accelerating debasement in the greenback opens the door to higher inflation and a dramatic loss in purchasing power.

Earlier this month, cognisant of the (currency) risk in the offing, Tesla announced the purchase of $1.5 billion in Bitcoin.

According to its recent SEC filing, Tesla stated:

“As part of the policy, which was duly approved by the Audit Committee of our Board of Directors, we may invest a portion of such cash in certain alternative reserve assets including digital assets, gold bullion, gold exchange-traded funds, and other assets as specified in the future. Thereafter, we invested an aggregate $1.50 billion in bitcoin under this policy and may acquire and hold digital assets from time to time or long-term.”

Note the reference to gold.

Has Tesla lost faith in the US Dollar? I suspect they’re not alone. Large companies all around the globe are sitting on piles of cash.

According to a recent Gold-Eagle article:

How many of these large entities see the risk? Well, if they weren’t thinking about it leading up to Elon Musk’s Bitcoin grab, they surely are now.

Not to diss crypto, but if a conservatively run company is looking for an alternative to fiat paper, gold’s long-standing role as a safe haven asset should draw greater attention.

This could be the catalyst that pushes gold to where it should be trading—well north of $2,000.

John Hathaway—portfolio manager at Sprott Hathaway Special Situations Strategy and co-portfolio manager of the Sprott Gold Equity Fund— has some good, well-considered thoughts regarding the metal and where it may be headed.

Hathaway believes that interest rates will need to stay low—that much is clear, considering the state of the global economy. He believes bonds—widely used as a hedge against stock market uncertainty—can no longer be relied upon. This will force large pools of capital to seek a more effective hedge against equity risk, and gold is the only asset that will offer such protection.

Hathaway estimates there’s roughly $100 trillion worth of assets currently under management—pension funds, mutual funds, sovereign wealth, private wealth—and gold does NOT factor into the equation in any meaningful way.

If a mere 1% of that total—$1 trillion—were to move into gold over the next few years, that would represent six years of new mine supply. That’s how under-owned gold is.

Freemont is focused on the discovery potential in one of the most prolific and mining-friendly jurisdictions in the world—Nevada.

The project is located at the very northern end of the Carlin Trend in proximity to a number of world-class deposits. 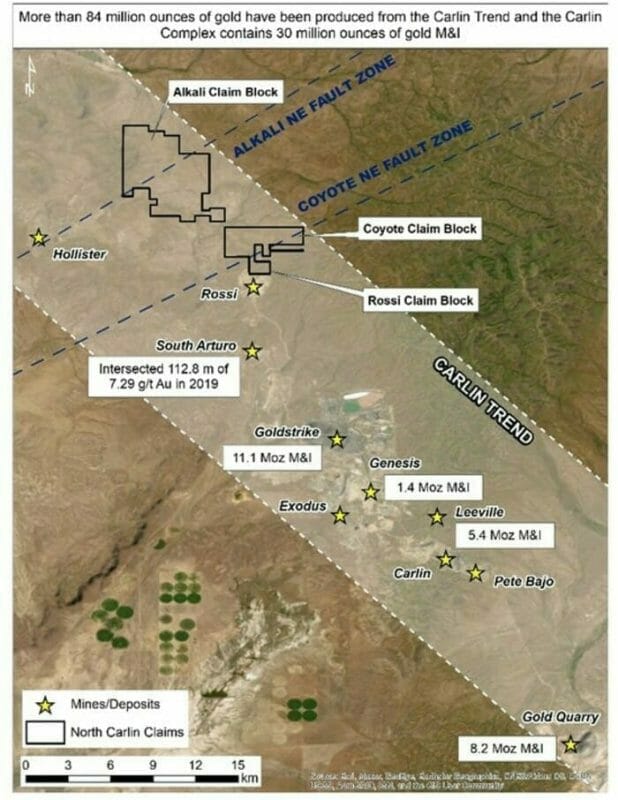 The project’s southern boundary is located only six kilometers north (and on-strike) of the South Arturo mine operated by Nevada Gold Mines (NGM)) and Premier Gold (soon to be i-80 Gold). The deposits comprising the South Arturo package have produced roughly 2.3 million ounces of gold to date (NGM is a JV between mining behemoths Barrick and Newmont).

Six clicks to the south is NGM’s Goldstrike mine which hosts a resource of 11.1 million ounces of Au (Measured and Indicated).

Last month, the Company mobilized a drill rig for a first pass campaign where a number of targets were prioritized via the application of good science—soil geochemistry, gravity-geomagnetic surveys, and the projection of key faults that control gold mineralization in the region

“We have developed a number of compelling drill targets in an underexplored area of the Carlin Trend. This is an excellent geological setting for the discovery of a major gold deposit.” 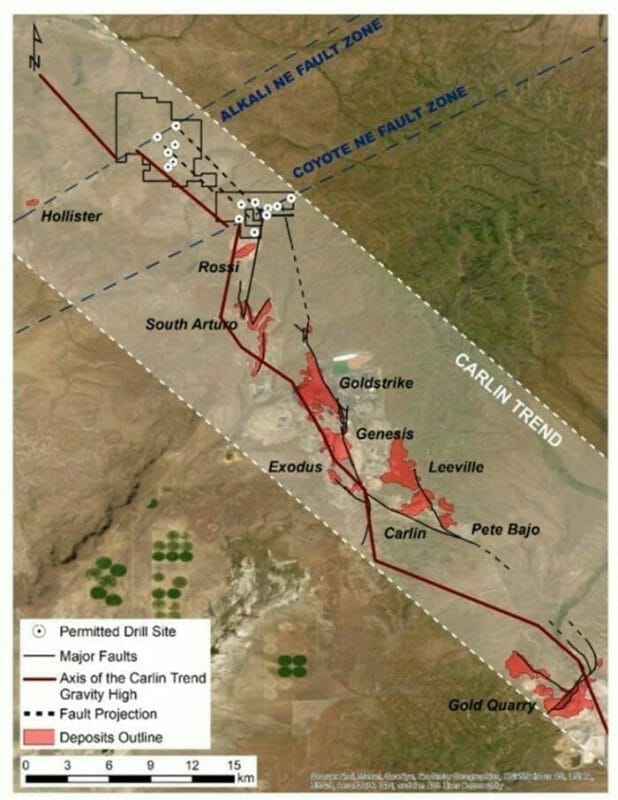 That first pass probe with the drill bit is now complete.

Freemont drilled three holes for a total of 1,910 meters (the program was originally slated for roughly 1,500 meters).

The Coyote and Rossi claim blocks

Two holes were completed at Coyote, located at the intersection of the projected Carlin Trend faults and the Coyote NE Fault.

This is good geological sleuthing at work. Intersections along these formidable structures often act as traps for economic gold mineralization. 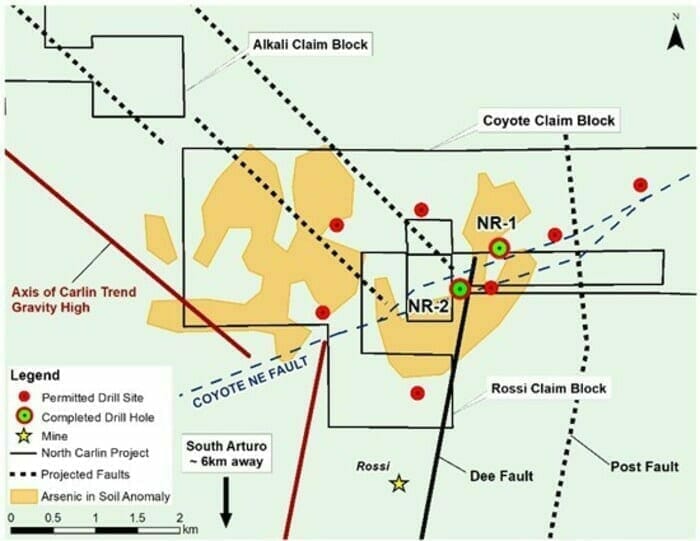 Here, sampling defined a large arsenic-in-soil anomaly. Arsenic is the most important pathfinder for gold in Carlin-type deposits.

Alakai is located at the intersection of projected Carlin Trend faults and the Alkali NE Fault, a northeast-trending structural corridor that hosts Hollister to the southwest, as well as Tuscarora and Jarbidge to the northeast.

Fremont probed Alkali’s subsurface layers with one hole in this first round.

“The Alkali NE fault cuts through a 1,500 meter by 2,000 meter magnetic high and coincident gold and mercury soil anomalies that occur on the eastern flank of the magnetic high. Together, the data suggest the presence of gold mineralization beneath alluvial cover.”

Mercury is another potential pathfinder for gold. 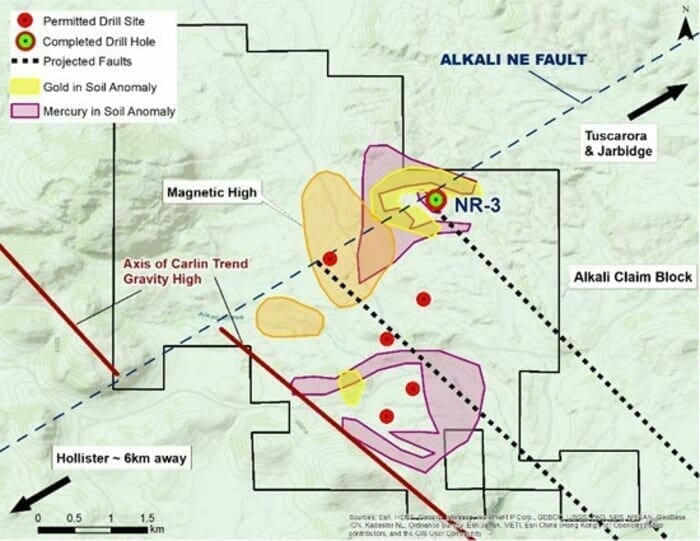 Results from this first pass North Carlin campaign will be reported once the assays are received, compiled, and interpreted.

Drilling at their Grog Project in northeastern New Brunswick, where the target is a large intrusion-related epithermal system, recently returned the longest gold-bearing hit to date.

“The primary objective of XTT’s drill program was to begin defining the geometry and extension of the Grog showing and to identify new peripheral mineralization zones toward the definition of a large epithermal gold system.”

The Company’s Northwest Project is also located along the McKenzie Gulch Fault and shares a common boundary with Grog.

On February 18th, the Company lifted a trading halt (set the day prior) and dropped the following headline.

A total of seven holes totalling 1,125 metres were completed to test the RIM vein extensions, and more importantly to test a kilometric magnetic structure interpreted as a fold hinge which parallels a regional north to north-east shear system within interlayered sandstone and siltstone of the Grog Brook formation. The drill program was widely spaced, covering approximately 700 metres along strike (north-south), and over 500 metres wide (east-west).”

The first core observation from hole Rim-20-06 identified the presence of visible gold. This hole is located approximately 100 metres south and along strike to the initial RIM vein showing. As at the RIM showing, the gold bearing quartz vein is located at a sandstone-siltstone contact.

All holes have intersected intervals of finely disseminated sulfides associated with sporadic to abundant quartz veining and quartz filled stockworks and located near brittle faults. X-Terra notes that hole RIM-20-08 cut a series mineralized mafic dykes associated with a strong chlorite alteration over three intervals of 11,6 and 15 metres (32 metres in total).

In speaking with X-Terra’s CEO, Mike Ferreira,  shortly after this news dropped, I learned that these visual assays were based on the first sections of core—some 30 odd boxes—delivered to the Company’s core shack. There were still another 90 boxes that had yet to be opened and inspected by the Company’s Qualified Person, Jeannot Théberge.

Any new (material) visual observations will be reported in a timely manner.

The goal of this drill program is to follow up on previous drill results and bulk sampling done on the RIM vein where a 5 to 10 metre cluster of gold bearing veins were intersected at approximately 50 metres under the RIM vein surface showing. The first drill program, which was comprised of four holes totalling 440 metres, was completed in the fourth quarter of 2020. In addition, the bench scale bulk sample on 129 kilograms and metallurgical recovery test done on the vein material at surface returned an average grade of 79 g/t Au (see X-Terra press release, December 15, 2020).

The RIM high grade vein system is now strongly believed to be associated with a kilometric fold hinge developed along a regional north to north-east shear system which is developed in sediments. A previous till survey conducted by X-Terra in the fall of 2018 highlighted a series of positive results located approximately 1.0 to 1.5 kilometres south of the RIM vein system. There is a strong belief that the vein pattern is controlled by lithological contrasts, folding and possible minor faults. The new detailed magnetic survey is an excellent illustration that provides X-Terra’s geological team with the ability to detect and interpret the gold bearing structural pattern. 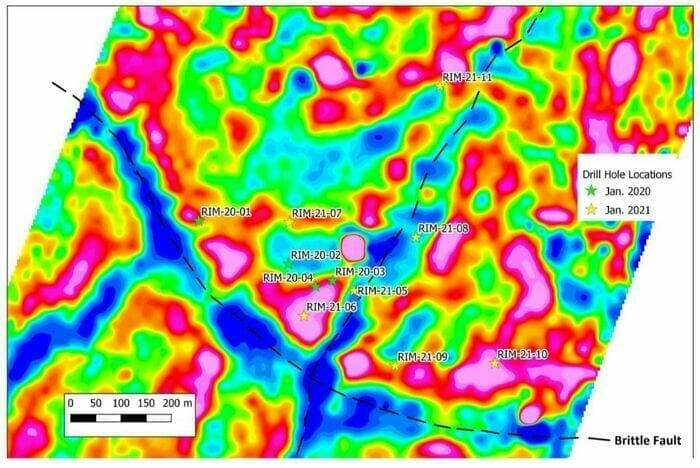 “This program served to test the fold hinge at the Rim vein target, which is believed to be controlling the high grade mineralization that has yielded grades up to 1,205 g/t Au at surface (See X-Terra press release dated December 5, 2018). To discover visible gold in the early stages of this drill program validates our exploration methodology and is an extremely exciting development, not only for X-Terra but also the province of New Brunswick.”

In an effort to improve on the timeliness and continuity of newsflow, the Company is directing future business to a new assay lab. Turnaround times are expected to be roughly 20 business days (let’s call it 25 to 30 for shit-happens). This will be a vast improvement over the 2.5-month wait they were forced to endure prior.

The Company’s wholly-owned Troilus East property, located along the (underexplored) Frotet-Evans greenstone belt in northern Québec, is another project that will see an acceleration in activity shortly.

Note the proximity of X-Terra’s highly prospective ground to this 8.11M AuEq resource. 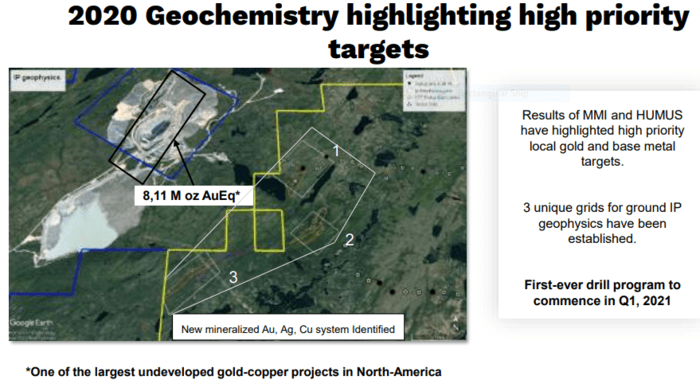 We’re a few weeks away from the start of a geophysical campaign—ground IP surveys—along these three grids at Troilus East. This will mark a final round of exploration that will help refine and prioritize targets for an upcoming drill program.

Drilling, as you well know, is an expensive proposition. The more layers of good science you lay down ahead of mobilizing a drill rig—the greater the correlation between geophysics and geochemistry—the better the chances of tagging a discovery.

CEO Fierra is currently reaching out to local drilling contractors and expects to be drilling by early April (a conservative estimate, I believe).

Full disclosure: Both Freemont and X-Terra are Equity Guru clients.