Tick-tock: Tocvan Ventures (TOC.C) quietly doing the work as it proves out an intriguing gold resource

When we first talked about Tocvan Ventures (TOC.C) back in June, it was selling for around $0.15 and nobody was really talking about it. In certain markets, hype is rewarded hard, but there’s something to be said for a deal in which what’s being said is the very essence of non-hype – and the stock has tripled in three months regardless.

Here’s Tocvan, trying to get the hairs on your neck standing up.

Calgary, Alberta – Tocvan Ventures Corp. is pleased to announce several key observations and conclusions from recent technical studies focused on the identification of a Phase 1 program of drill-hole targets at the Pilar Gold-Silver Project in Sonora, Mexico.

Ooh. Makes you all frisky, don’t it?

Come on, you’re not giving it a chance.

Let’s do some more. Pop a button on your pants and groove with me.

Results of work since November 2019 have revealed a gold-silver mineralized trend extending southeast from the main drilled area, a
second parallel mineralized trend of gold and silver to the east of the drilled area, a new high-grade silver zone (East Zone), and results
also show gold-silver mineralization extending across the property from north to south.

That’s what she said, amirite?

Data synthesis are currently underway to refine drill-hole targets. The process for drill hole permitting has begun, and Tocvan is currently
entertaining quotes from drilling companies.

Oooh. Don’t threaten me with a good time, Tocvan!

No? Okay, so what I’m getting from you here is, you’re not a technical mining guy. I hear that. I can respect it.

But here’s how Tocvan stock has performed, even in the midst of its current mode of ‘speaking mining terminology so hard, even geologists are pounding energy drinks to get through it.’ 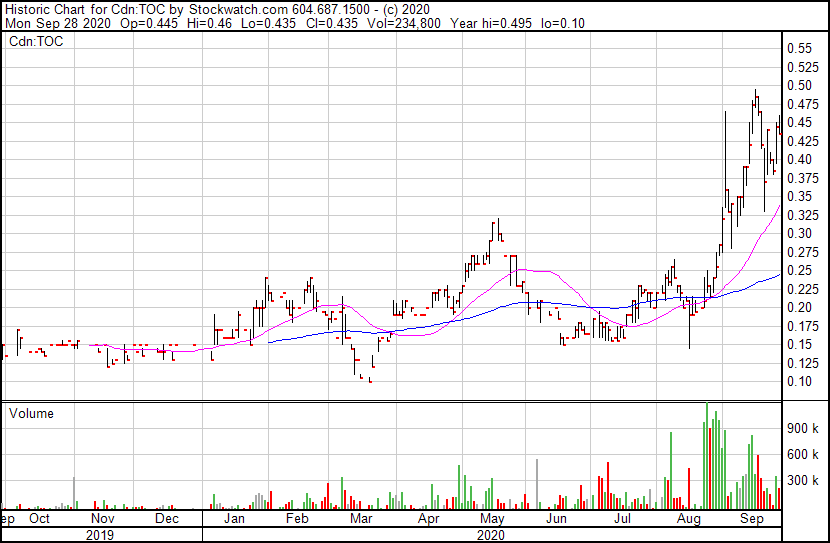 You don’t wanna hear about veins and steep plunges and sub-vertical pipe-like features?

One significant conclusion is the interpretation of a sub-vertical pipe-like feature that may represent a breccia feeder pipe related to epithermal mineralization. The pipe is ~100m in diameter, oval shaped, and has a steep plunge (~70°) to SSW with a 195° azimuth (Figures 1, 2, 3), and the pipe location appears to be controlled by a fold nose, based on interpreted basement folding. In relation to the epithermal model, breccia pipes are a significant feature and can hold bonanza grades (>1opt) of gold and silver. The pipes may extend from fissure veins that are known to contain significant grades of gold and silver in other epithermal deposits.

And the reason this is ‘hawt’ to a girl like me, and should be to a girl like you, is that this nigh incomprehensible-to-most-folks miner talk has attracted those who understand the miner talk to buy this stock hard. Look at the last six weeks on that chart above – that’s a significant amount of buying daily, especially for a company with a small ass float.

And I don’t use the term ‘small ass float’ lightly. TOC has less shares than my twitter feed.

That’s a threebagger winner rolling *to* a mere $11 million market cap. Which means the opportunity to get in before things really light up is still afoot.

After six weeks of trading volume that regularly hit 10% of the float daily, and a steady rise in share price over that time, what the gods of smallcap are whispering to you right now is, ‘hmm.’

And when the gods say ‘hmm’, you take notice.

On the ground, where work is so often talked of and yet not executed by microcap miners, Tocvan is active. Let’s do some translation from Geonese.

“The work completed on the Pilar Gold-Silver epithermal project has incorporated a variety of field programs, including geophysical surveys, rock and soil geochemical sampling, and structural analysis.”

Translation: We’re young, we’re small, and therefore before we start putting drills in the ground and ramping up costs, we’re going to use every non-invasive means at our disposal to see what we actually have. We’re going to look at historic data, we’re going to pluck rocks off the ground and have them analysed, we’re going to sample the soil, take pictures from helicopters, wave divining wands, hire a psychic named The Mysterious Olga, send out the sniffer dogs, and we’re going to rock the data from every angle we can.

“Results of work since November 2019 have revealed a gold-silver mineralized trend extending southeast from the main drilled area, a second parallel mineralized trend of gold and silver to the east of the drilled area, a new high-grade silver zone (East Zone), and results also show gold-silver mineralization extending across the property from north to south.”

Translated: Have you seen this shit? We’re finding things that are indicative of potential new areas of the mineral resource, which means we may be sitting on something far bigger than we knew about. It’s early days, but what we’re hoping to find? We think we found.

“One significant conclusion is the interpretation of a sub-vertical pipe-like feature that may represent a breccia feeder pipe related to epithermal mineralization. The pipe is ~100m in diameter, oval shaped, and has a steep plunge.. This is potentially significant because “The pipes may extend from fissure veins that are known to contain significant grades of gold and silver in other epithermal deposits.”

Translated: We’re starting to see what might be thick connective tissue between areas of interest, which might be a sign we have a larger area of interest..

Now, the reason the company doesn’t just come out and say “Jumping Jehosophat, we’re rich, bitches!” is because they’re not. This is a $11 million market cap company in the early stages of fleshing out this resource, so nothing they’ve found is more than ‘hmm’ just yet.

It’s like, “I wonder if we shoveled up some dirt over here, if we’d find chemicals that you’d sometimes find around gold… oh, look, we did that,” and “If we took those rocks over there and crushed them, and send them to a lab, would they find shiny sprinkles? Yeah. Yeah they did.”

None of that is anything to build a mine around just yet. It’s not even enough to build a drill program around… yet.

But Tocvan is doing the work and getting the sort of results from that work that guys who like gold, like to see.

And when they tell people about it, they don’t yell crazy hype, they put out technical news releases that will send the common man to sleep, but alert the mining nut that they should pay attention in the weeks and months forward.

If you were paying attention to us back when we first talked about Tocvan, you’re already in multi-bagger territory. That’s a good thing, for sure, and evidence that the TOC brainstrust are doing what they told us they would do.

But know that, in the weeks and months ahead, there may be slow periods and they may be less fruitful periods and there may be macroeconomic trends that beat a little $11 million company up. There also might be findings and moments that bring more people to the party, and see that little tiny 24 million share float become really important.

In short, when Tocvan trails off, it’ll trail hard. And when it runs, it’ll run laps.

We have confidence in the way they company has moved forward so far. We eagerly anticipate seeing that drill program materialize and holes being poked, because then we’re in really serious territory.

FULL DISCLOSURE: Tocvan Ventures is an Equity.Guru marketing client, and we have purchased stock in the company.