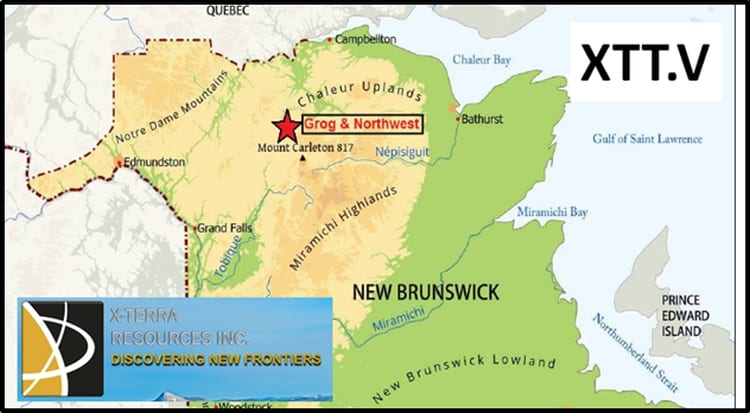 On July 15, 2020  X-Terra Resources (XTT.V) announced that it has received all the authorization permits to continue exploration and drilling over the Grog and Northwest gold properties located in New Brunswick. 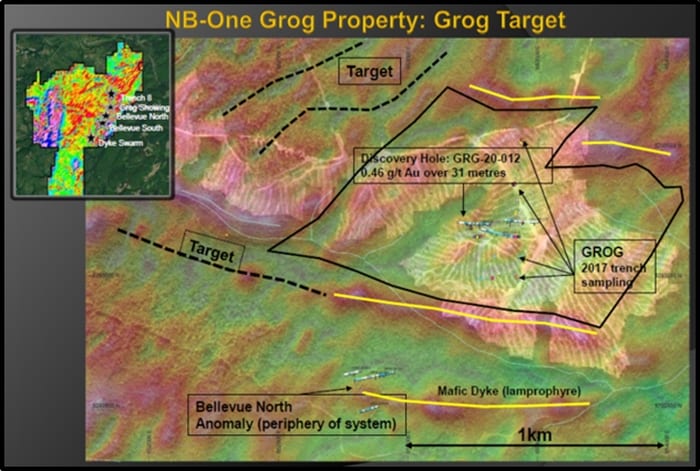 “On the Northwest claims, a 2012 bulk sampling program on the Bonanza vein saw 16-tonnes of material grading 24.37 g/t Au hauled to surface.

Initial drill results from a limited first pass drilling campaign by the company tagged modest values, including 6.93 g/t over 0.5 meters at a depth of 34 meters. The company plans additional geochemical work to better home-in on the area’s higher-grade subsurface potential.” – End of Nolan

On July 15, 2020 X-Terra also announced that it was awarded a $35,000 grant under the New Brunswick Junior Mining Assistance Program.

“Plans are being finalized to carry out a detailed geochemical sampling survey over the Grog target in addition to a detailed ground IP survey,” stated XTT, “The surveys are expected to being shortly, which will be financed in part by the $35,000 grant.”

The objective of this program is complementary to the winter drilling program which resulted in the new gold discovery of 0.46 g/t Au over 31 metres.

The mineralization style continues to highlight strong characteristics of an epithermal system,” stated X-terra on May 5, 2020.

“We believe that the 11 hole 1,499-metre drill program only covered a very small fraction of the targeted environment,” stated Michael Ferreira, X-Terra’s President and CEO. “Reaching a significant mineralized interval this shallow (from 107 metres to 143 metres) is a milestone”.

X-Terra’s geos formulated a hypothesis that, “hole GRG-20-012 may have cross-cut a north to north-east oriented lens. Significant additional drilling will be required to define the exact dip and plunge of the mineralized lens and the true width and extent of this discovery”. 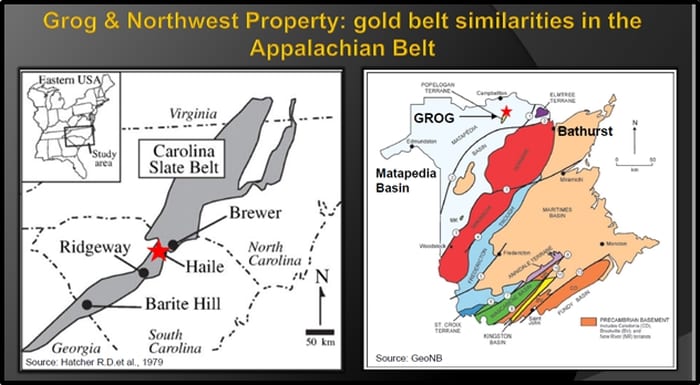 “The continuous gold interval was obtained at a vertical depth of 81 metres in an area where trenching had already delivered sporadic results,” reports XTT, “This achievement for an inaugural program was convincing enough to cover the area with additional preparatory works.

Specific objectives are to 1. Discern the deposit signature, 2. Extend the surface footprint of the Grog showing and 3. Confirm parallel structures to Grog.

“This is an exciting step for our team as we will be able to move forward while we wait for our Troilus East samples to come back from the lab,” stated Ferreira.

XTT overview can be viewed here:

“X-Terra currently has boots on the ground at its wholly-owned 93 square kilometer Troilus East property along the Frotet-Evans Greenstone Belt in northern Québec,” stated Nolan. 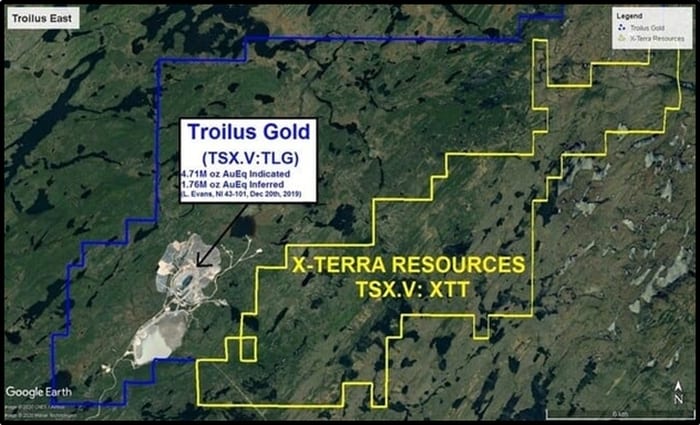 In preparation for a summer-of-2020 drilling campaign, the company stacked multiple layers of good science:

Of the 78 samples extracted during the till sampling campaign, 72 tested positive for gold grains using both visual cues and the ARTGold recovery technology developed by IOS Geoservices. – End of Nolan.