iAnthus (IAN.C) defaults on debenture payments – but is that a weakness or a tactic?

Long time readers know, a year or two back, we wrote a lot about a US multi-state operator (MSO) in the cannabis dispensary space, iAnthus (IAN.C). We liked the company as it accelerated its dispensary acquisition program but stopped coverage in early 2019, with the shareprice in the $5 range, as it began to overpay for assets in a land grab with competitors we believed would ultimately have few winners.

Today, iAnthus has put out some uncomfortable news announcing that, because it is involved in a lawsuit with creditors, it has chosen to default on debenture interest payments.

IAN’s share price was already hurting after thae lawsuit scuffle became public in January, with shares selling for as little as $0.67 yesterday. 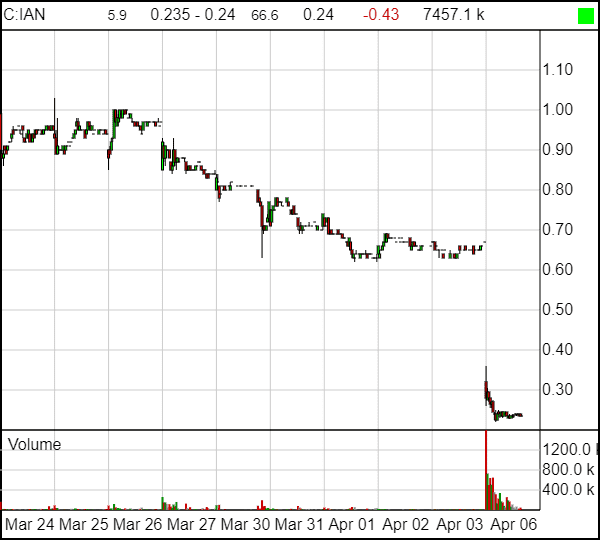 My position lies somewhere in the middle because nuance and context are everything and this situation has a lot of both.

iAnthus made a decision a while back to try to stick with their sector leaders by borrowing money and expanding hard in competition with MedMen (MMEN.C) and others. That’s a two-edged sword – in a strong market, you’re building far more value than you’re borrowing but, in a down market, you’re under extra pressure to keep things together when debts come due, and now you have someone to answer to before making other financing moves.

Sometimes keeping things together requires more financing moves, so companies will often toss out chum to their borrowers to avoid conflict in the manner of warrants, options, re-pricing, and the like.

iAnthus had previously borrowed money from Gotham Green Partners (GGP), and was looking to borrow more recently, essentially taking out another credit card to pay for the first credit card. But an earlier unsecured lender, Oasis Investments II Master Fund, didn’t want that to happen and considered it a betrayal of their own financing terms, so they went public in saying so.

iAnthus says that hurt their stock at a time when it had enjoyed several months of sitting flat at around $2 per share, which wasn’t terrible in this market and looked like a decent place to slowly rebuild value from.

Exactly how much Oasis hurt iAnthus is open to debate. Having one of your borrowers get yappy about their discontent certainly didn’t help, especially as the markets were soon cratering from COVID-19 concerns.

iAnthus says Oasis has been a whinypants for some time, and was looking to better its own loan terms by making life hard for its borrower.

Oasis was issued an unsecured convertible debenture in the principal amount of $25-million (U.S.) in connection with the company’s offering of unsecured convertible note units announced on March 18, 2019, and May 2, 2019. Since closing of the offering, Oasis has consistently agitated iAnthus with unfounded allegations and self-interested proposals, all with the goal of renegotiating the terms of the unsecured debenture.

According to iAnthus, Oasis’ allegations put subsequent financings in doubt, which it says has caused the company real damage. iAnthus is seeking damages as a result of that which could end up larger than the loan in question and, while that suit is progressing, iAnthus will remain in default to their lenders.

WHY THE STOCK IS DOWN:

iAnthus missed their interest payment to GGP, which technically allows Gotham to convert their debt to IAN stock, which people are seeing as the world’s end because it would dilute IAN’s share structure heavily and, rightly, drive the share price down hard into the dirt.

So folks have sold it hard and dropped the share price into exactly the same dirt they’re afraid IAN would end up in a worst case scenario.

The bigger question is, however, does GGP consider themselves at odds with IAN or not?

There’s no question, defaulting on your debenture payments is a bad look in a general sense. And taking those debentures on in the first place was a decision to ‘compete with the Jones’ that I wouldn’t have personally taken. Being a strong #5 in your sector with no debt, to me, is better than trying to be #1 and running debt up so hard that a bump in the road puts you in this kind of position.

If GGP wants to truly smoke IAN going forward and basically takeover a burning ship, it could definitely do so – but I’m guessing IAN wouldn’t have defaulted on that interest payment without Gotham giving them a quiet go ahead and, based on IAN’s other statements today, that the company will ‘continue to expand’ while they’re in this mess, it’s my thinking that GGP and IAN are happy little friends on the quiet.

Despite the challenging conditions, the company will continue to pursue expansion opportunities in retail, cultivation and manufacturing, as well as further development of its retail and product brands.

“We have moved aggressively over the past few months to reduce head count and overhead spend in addition to other cost savings. Our business has never been stronger, and iAnthus is on track to achieve positive adjusted EBITDA and operational cash flow in 2020 as previously planned.”

Deeper info if you’re into it:

$ian $ithuf Below is brief summary of the unfolded events. Everything is tied back to this. pic.twitter.com/O6enZtYRaN

Why are iAnthus and Gotham Green so close?

This passage in today’s IAN news may be worth considering:

IAN CEO Hadley Ford has been accused of being active in borrowing money personally in ways that appear anything but arm’s length from the company. He’s alleged to have borrowed both from iAnthus (paying 2.5% interest when his company is paying many times more than that), from someone he appointed to the IAN board, and from GGP principals.

People wondering what Hadley Ford is being investigated internally by $IAN for:

Took a personal loan of $100k from Jason Adler who is in charge of Gotham Green.

Whatever happens with the lawsuit going forward, it’s clear Hadley Ford’s time is running out, and that his board is looking to get ahead of that before Oasis starts dropping bombs in court.

Expect an ‘I’m going to spend more time with my family’ soon.

SO HOW DOES THIS ALL END?

If I were a betting man, I’d suggest iAnthus is confident they’ll win in court or they wouldn’t have filed suit, and that doing so will 1) allow them to put off paying interest on the Oasis money for a while and 2) shove Oasis back into a cold, dark corner going forward. I’d also suggest GGP is fine eating (or letting accrue) a little interest in the short term if it helps send Oasis to the Bad Place and makes iAnthus more dependent on them going forward uh, I mean, stable.

GGP has put a lot of dough into this deal and iAnthus’ continued ability to do business is important to GGP getting a return on their investment. But winning a lawsuit is going to take time and be messy and, in the meantime, there’s an awful lot of uncertainty about that process that’s going to stop folks making long term investments in IAN.

There are plenty of true believers doubling down on IAN stock this morning, after it had the guts ripped out of it, believing it’ll never be this cheap again. And certainly, IAN could, at any time, sell a dispensary and pay their interest and keep themselves afloat for a while if needed.

Loaded up at $0.24. A market cap of $40 million for a company that operates out of 11 states is absurd. Opportunities like this don’t come around too often.

But betting on lawsuits is the sort of gambling usually reserved for dog fighting enthusiasts and 1980’s jai alai promoters. If I were to buy in on iAnthus right now, it’d be for a short term trade, not for a long term hold. As we’ve seen with some of the cannabis bankruptcies filed recently, when management gets to the point of borrowing money to cover borrowed money, there’s seldom anything left for shareholders when the dust settles.

iAnthus is poking a bully in the chest with a bigger bully backing them up. The trouble with that is, the bigger bully’s interests are always their own.

To once again paraphrase the great Hunter S. Thompson, “I am in the gambling business, for good or ill; it is the business I have chosen, and the only governing rule that we all recognize is: always sit close to an exit and never trust a man who doesn’t sweat.”