Triggered: Trump Jr. is right: liberals are full of hatred – here’s how to invest in it

One of them, Donald Trump Jr., just wrote a book called “Triggered: How the Left Thrives on Hate.”

Trump Jr. was a frequent guest-judge on his father’s reality TV show, The Apprentice, and he’s now V.P of the Trump Organization, alongside his siblings Ivanka and Eric.

The thesis of the 294-page book is that “Angry mobs have taken control of major media outlets, and political correctness has strangled free thought.”

The author dedicates Triggered to “the Deplorables”, a reference to Hillary Clinton’s unwise assessment of Trump Sr. supporters. “I am proudly one of you,” Trump Jr. assures his “deplorable” readers.

The book has climbed to the top of the NYT Bestseller list, and is currently the #2 Best Selling Book on Amazon.

The commercial success of Trump Jr’s book is galling to liberals for two reasons: 1. It makes Trump Jr. richer, 2. It provides data-based evidence that Republicans do read books.  (Unlike Trump Sr – who does not).

Does “The left thrive on hate”?

We could quibble with the word “thrive” – but Trump Jr.’s central thesis is correct:  the left hates his father.

Because he is a self-confessed groper?

The CEO of a fake charity?

A liar who promotes violence?

My 90-year-Father – a liberal academic – states that he hates Donald Trump, “because he’s mean”. But there are lots of mean powerful people in the world. Trump is the only one that really gets under his skin.

The animosity between the political left and right is reciprocal.

“Like spoiled, angry children, they [Liberals] rebel against the normal responsibilities of adulthood,” stated one conservative psychiatrist, “and demand that a parental government meet their needs from cradle to grave.”

The left’s hatred of Trump Sr. says more about liberals than it does about Trump.

He’s hated because his political triumph suggests that common decency is no longer relevant.  For many, this is deeply destabilising.

U.S. Democrats are forging ahead with an impeachment enquiry into President Trump, which will – in our opinion – make it less likely a democrat will win the 2020 presidential election.  Nancy Pelosi has stated as much.

A recent poll by the New York Times and Siena College showed that Trump, despite overall low approval ratings, remains strong in six key swing states he won in 2016,” stated foreignpolicy.com, “This should alarm Democrats.”

Warren fares worse against Trump in those states than Biden or even Sanders. The new numbers indicate Trump may have an even greater advantage in the Electoral College in 2020 than he did in 2016.”

Democrats used to be called the “tax and spend” party.

Soft-hearted and fiscally irresponsible – these smug socialists take money from industrious workers and re-distribute it to bullshit feel-good programs like food stamps.

Republicans are now the “Don’t tax and spend party.”

The U.S. government owes about $23 trillion (a lot of it to China), and is plunging another $1 trillion in debt every year.

America’s economic engine is sick.  Trump Sr’s mantra: “Make America Great Again” can only be sustained – even as a mirage – with borrowed money.

News flash: if you toss a trillion dollars from a helicopter, the GDP will go up, and so will the NYSE and the NASDAQ.

The “P/E 10 ratio” measures a decade’s worth of stock prices against company earnings.  That ratio has doubled in the last decade, suggesting that U.S. stocks are overpriced. 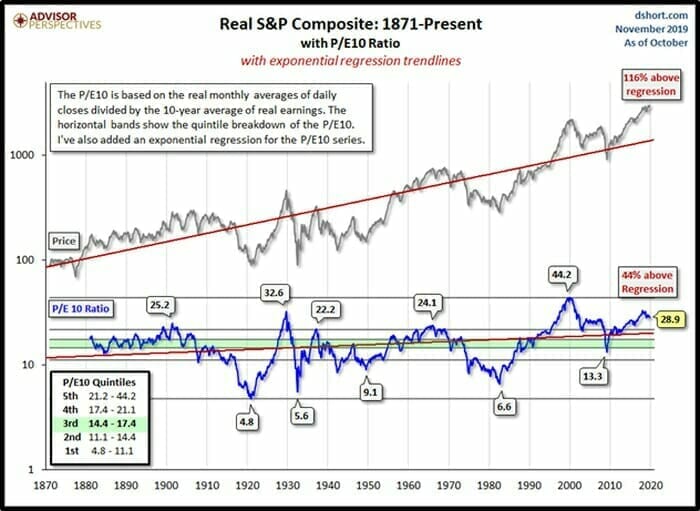 U.S. debt is based on fiat currency (paper money), and – as Trump Sr. has discovered – it is very easy to manipulate supply.

We believe this manipulation is likely to lead to a devaluation of fiat currency, particularly the U.S. dollar.  If that happens, gold may be a powerful defensive strategy to preserve and grow existing wealth.

Bernie Sanders says the U.S. government can afford give every U.S. citizen a free education.  We suspect that will require additional deficit financing.

The conceptually-fuzzy pledge to “Make America Great Again” (ask black Americans what period of U.S. history Trump Sr. is referring to), will have an higher price tag, because the harsh reality is: Americans are good at shopping and not much else. 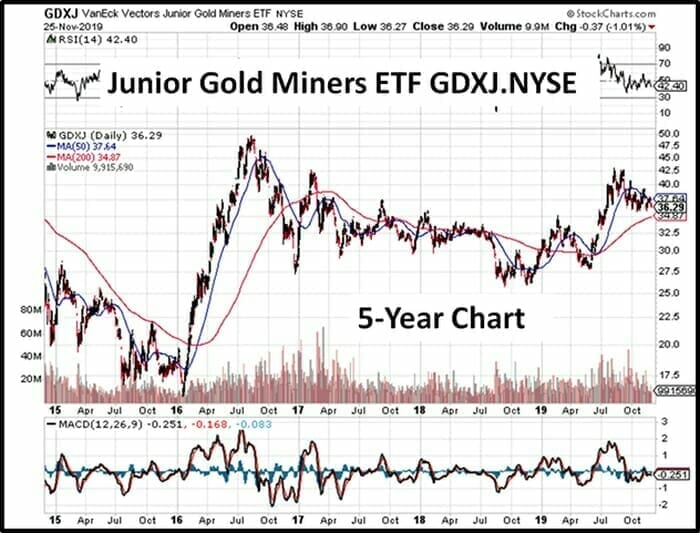 “If an ExplorerCo is successful in tagging a significant new discovery, it will attract interest,” writes Equity Guru’s Greg Nolan in an update on Golden Triangle explorers, “If the discovery is world-class, it’s likely to provoke a predatory response from one or more resource-hungry predators.”

It’s important to understand that every day a gold miner digs ore out of the ground—every day the company is in business—it reduces its mineral inventory (its reserve base).

The brutal bear market over the past eight years forced producing companies to dramatically scale-back exploration spending. As a result, their pipeline of new projects may be a little on the lean side.

This sets up an interesting dynamic—an end game—for shareholders positioned in new discoveries.

A FAT takeover offer from a resource-hungry producer is the ultimate reward.” – Greg Nolan.

“This sabbatical gave him the rural street-cred needed to go into places like West Virginia and push for candidates his father has endorsed,” stated Real Clear Politics.

On a recent appearance on The View, Trump Jr. took heat for his father’s attacks on Gold Star families.

Trump Jr. – “counter-punching” like his Dad – accused Whoopi Goldberg of defending the child-rapist Roman Polanski, and went on to attack Joy Behar for wearing “blackface,” which she denied, while admitting that she had once dressed as an “African Queen.”

To rub salt in the festering liberal wound, Trump Jr. created a website, encouraging his fans to buy copies of Triggered and mail it to their “least-favorite liberal.”

“This book will expose all the tricks that the left uses to smear conservatives” states Trump Jr. “from online “shadow banning” to fake accusations of “hate speech”

Trump Jr. claims that liberals just “want to get my father out of office and punish anyone who supported him — starting with me and my family.”