Some days I wish I was a “pure numbers guy”, so I could dispassionately analyze financial data – and base my investment decisions solely on that. But I’m not that guy.

I invest in companies that I admire.

On August 28, 2018 I wrote an article about Supreme Cannabis (FIRE.T) in which I pointed out that Supreme has secured six provincial supply agreements.

Combined, these companies have a market value of $28 billion. WEED alone is worth $12 billion. Supreme currently has a market cap of $467 million – about 24 times smaller than WEED.

During that same time frame, Canopy, Aphria and Tilray are down an average of 35%, Aurora is flat, while Organigram is up 40%. 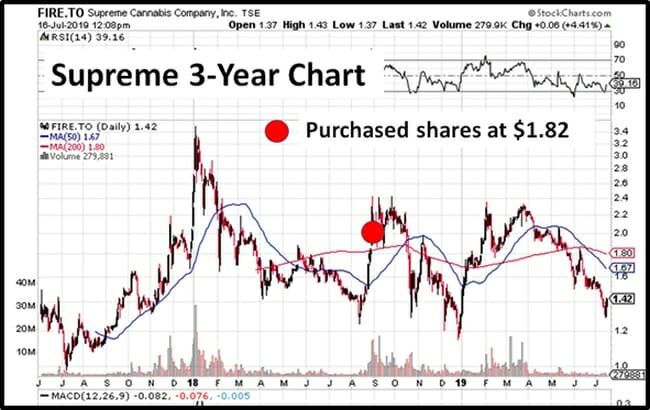 I would rather smear my crotch with peanut butter and have a pit-bull named “Biggie Smalls” chew off my nut-sack than confess I made an unprofitable investment.

But despite my discontent at being underwater on Supreme, I am not going to sell my position in FIRE.

Here are 5 reasons I still believe in Supreme Cannabis.

“This revenue growth was driven by an increase in our capacity at the 7ACRES facility, a ramping up of our product packaging capabilities and, we believe, consumer preference for high-quality cannabis,” stated Navdeep Dhaliwal, CEO of The Supreme Cannabis Company,

“This company is a god damned machine,” stated Equity Guru’s Chris Parry after dissecting the Q3, 2019 financials, “doing exactly as promised in putting out the highest quality product, growing its brands to a point where people are seeking it out, and expanding globally in a sensible way.”

Supreme has about $75 million in cash, the same amount it had a year earlier. 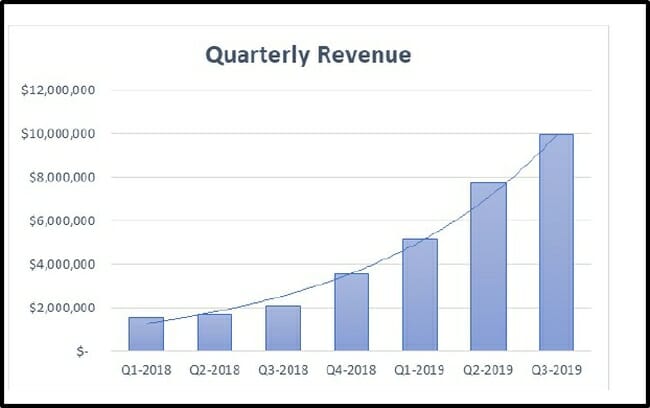 Unlike a lot of Canadian weed producers, Supreme has not purchased dispensaries, vape pen websites, or tried to sell cannabis directly to consumers.

Supreme sells cannabis wholesale to other cannabis companies or bulk sales to provincial retailers for the Canadian rec markets.

Supreme’s largest single customer is Tilray.  They first signed a $2 million deal, which was then expanded to a $12 million deal.

According to a Financial Management Discussion & Analysis (MD&A), “Supreme management is focused on developing and maintaining 7ACRES’ position as a leading brand of premium cannabis flowers at scale. Sales of cannabis are completed via Business-to-Business (B2B) transactions.” 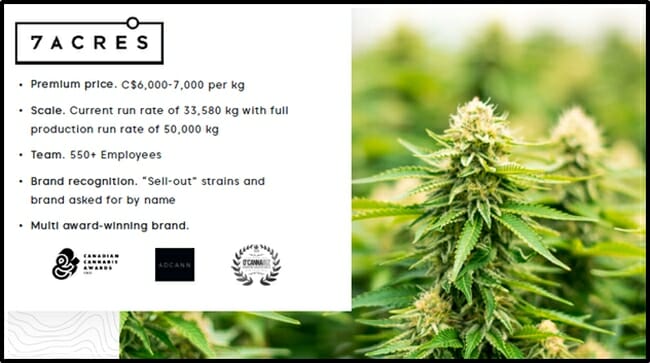 The complete product lineup will include pre-rolls, extracts, capsules, and cannabis oils to be sold by Supreme Cannabis under the KKE brand.

“Wiz is a globally-recognized cannabis taste maker and connoisseur,” states John Fowler, President & Founder of Supreme Cannabis, “KKE has established a brand that is synonymous with ultra-premium quality, based on world-leading genetics.”

“Canada is a very important place to me,” stated Wiz Khalifa, principal of KKE, “it’s the perfect start for the international expansion of Khalifa Kush.”

Wiz Khalifa (31) is a precocious lyricist. By the age of 15 he was getting free recording sessions in a studio called I.D. Labs.  He released his debut album, Show and Prove, at the age of 19

“Dear Khalifa Kush, I am writing this to inform you that I am stoned,” states on-line reviewer Senatorbear. “Stoned in a happy way, a loving way. For some odd reason, this strain is my new Viagra.”

“Small amounts had me feeling very euphoric while the large amount let me know this had +3 to stagger effects,” writes Ganjaguy2020, “so not for the feint of heart, timid, or new to smoking.” 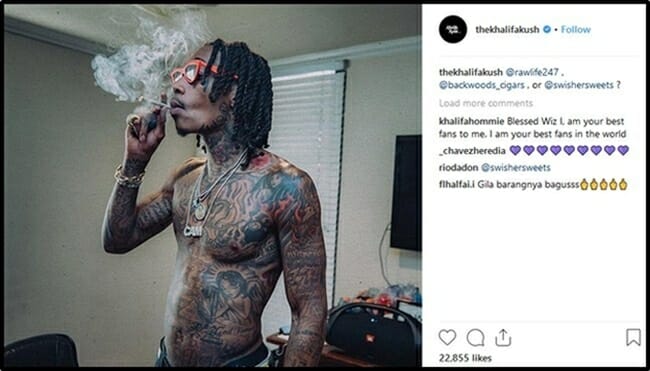 A month ago, Supreme announced the launch of Supreme Heights, an investment platform based in London, UK “focused on opportunities in the UK and Europe’s CBD health and wellness space.”

“The growth of the CBD and cannabis markets have been slower than they have been in the U.S. in part because in the EU, CBD is largely limited to topical use and tobacco products,” stated The Rolling Stone on March 26, 2019, “while its use in ingestibles (such as food additives, tinctures and capsules) is prohibited.”

That may change, however, following an amendment proposed by the European Food Safety Agency to allow CBD in ingestible products, which could pass at the end of the year.

Supreme explained to Equity Guru that the structure and governance of Supreme Heights creates significant “flexibility and creativity” in the way that European investments are made.

The European Union is one of the world’s largest and most sophisticated markets, with member countries adhering to a galaxy of different rules and regulations.

“The rapidly evolving CBD markets in the UK and Europe present compelling investment opportunities,” stated Dhaliwal, “We look forward to driving value for Supreme Cannabis shareholders through this investment platform.” 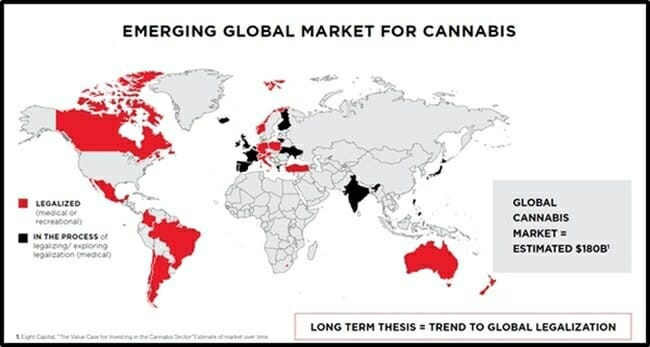 When you take a company public, there are two principal jobs: 1. Manage the company.  2. Manage the stock.   CEO’s who try to both jobs, often run into trouble.

Supreme follows a playbook whereby they have a CEO, Navdeep Dhaliwal, who is the operations guy, and a President, John Fowler, who stands and delivers in front of cameras.

Because of this division of responsibility, when I think of Supreme, I think of John Fowler. I’ve seen his face more.

In one article we described Fowler as “a brilliant bullshit-free President who understands agriculture, politics, products, branding – and numbers.”

For ten years, prior to becoming President of Supreme, Fowler toiled in the medical cannabis sector as a cultivator, influencer, patients-rights advocate and lawyer.

Last spring Fowler was been named to High Times’ list of the 100 Most Influential People in Cannabis.

In an ideal world, I’d make $700,000 a year selling photos of my ass.  In this world I have to hustle/research/type/publish – while augmenting my wages with investments in cannabis, technology and mining.

Although I have a science degree and some auxiliary training in statistical analysis, my investment decisions are driven by narrative, not data.

I originally invested in Supreme because I admire John Fowler, I approved of FIRE’S business objectives and the company was hitting its milestones.

I’m holding onto my FIRE shares for those same reasons.

Full Disclosure: Supreme Cannabis is an Equity Guru marketing client; the writer of this article purchased shares in the open market at $1.84.