Supreme Cannabis (FIRE.T): Enough screwing around, you guys, get behind quality

The old junior markets rule #1 is ‘buy rumour, sell the news’, and no company I’ve ever seen illustrates this in practice more than Supreme Cannabis (FIRE.T). For several years now, whenever it tiptoes upwards in share price, a news event happens and shareholders sell off.

Don’t get me wrong, you can make great money playing the ups and downs of a stock that behaves in a predictable manner, and boy is this one predictable. It’s share chart looks like a heart monitor.

But the problem here is the big picture on Supreme just isn’t considered by a lot of folks who are happy to throw their life savings into whatever is the biggest thing out there.

“Canopy will rule the world!” they’ll yell, placing their bets on a many billion dollar double while Supreme keeps on doing great business, hitting its milestones, developing sensibly and responsibly, but being ignored by the pack as it lingers in the lower half of market cap realizations.

Here’s the company share chart over the last three years. What you see in this chart should be startling to any cannabis investor because what it shows is, Supreme missed the ‘big stupid bubble’ almost entirely.

Look at the $2.05 share price in late 2016 and the $1.89 Share price of today and ask yourself if that makes any sense on a company that is 42 months older, way far advanced in their business plan, and has growing sale numbers every quarter. 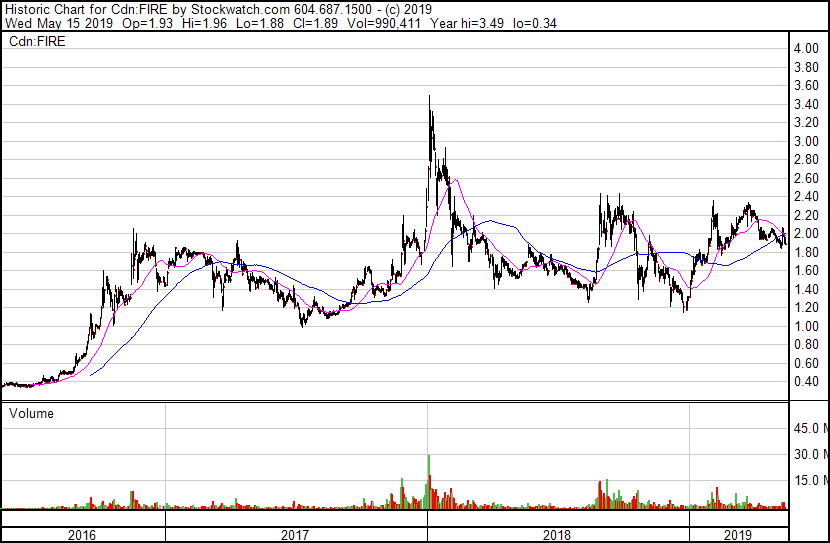 Supreme is a Canadian publicly traded company committed to becoming a leading supplier of affordable medical cannabis through its wholly-owned subsidiary 7 ACRES, a federally licensed  producer of medical cannabis pursuant to the ACMPR operating a 342,000 sq. ft. hybrid greenhouse facility.

That growhouse was literally all there was. The company was a year from selling product and was in the midst of licensing delays and construction, but it was selling for $2+ per share.

Here’s what you’re buying today, two and a half years later, for less:

And you get actual sales revenue:

As announced in November 2018, under MediPharm and Supreme Cannabis’ three-year contract, 7ACRES will supply a minimum of approximately 1,000 kg of high-quality cannabis trim per year as input to MediPharm for the extraction and production of premium, high-terpene cannabis oil products. Under the terms of this agreement, all cannabis oil products processed by MediPharm will be sold under Supreme Cannabis’ brands. The Company will initially launch oil products to be in British Columbia, Alberta and Ontario before expanding distribution coast-to-coast.

In the quarter, the Company furthered its global growth strategy, becoming one of the few Licensed Producers to secure a letter of intent (“LOI”) with Malta Enterprises.

On April 28, 2019, 7ACRES won the best marketing campaign at the O’Cannabiz Awards for its “Respect the Plant” campaign.

This company is a god damned machine, doing exactly as promised in putting out the highest quality product, growing its brands to a point where people are seeking it out, and expanding globally in a sensible way.

Here’s what we said about Supreme’s Lesotho operations in a recent article on Equity.Guru:

Last year, Supreme bought 10% of a Lesotho-based licensee, Medigrow, and spent nearly a year in due diligence, ensuring the company in question had real assets and a professional team and would ultimately be able to supply Supreme with product that met its standards. Central to the deal for [Supreme President John] Fowler was a social responsibility aspect that will see hundreds of employees raising the standard of living for thousands of extended family.

Medigrow was the first licensee in Lesotho, and was granted the right to grow a year before any other licensee. Currently, they are 33 licensees in the country now, but most can’t afford the $37k fee required to actually start growing.

[..] “We met their leadership team, were impressed by them, and after going back and forth multiple times, we sent our team down there to visit and determine not just that the facility and license were real, but also to be sure this was a facility that could deliver a long term competitive advantage. We needed to physically see that management team in their element, and that took multiple trips to Lesotho as well as their guys coming to us in Canada to see our facilities over a number of months.”

“Once we move into a market,” he says, “we’re not going to be embarrassed. We need them to operate not just in accordance with local regulations, but to be on that path to market leader. They represent us.”

That’s fleshed out online, where Supreme features the Medigrow Lesotho brand on their website. You can also see details on the Medigrow website. 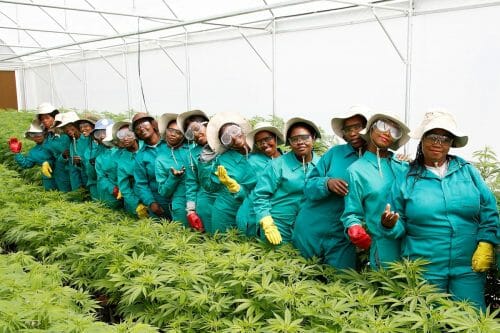 But building your own website is cheap. When third parties echo what you say you’re doing, then you’re talking about something serious.

As you can see on this page put out by Medigrow’s construction partners, that shows some beautiful imagery and intensive detail about what they’re building, this is a very real project. 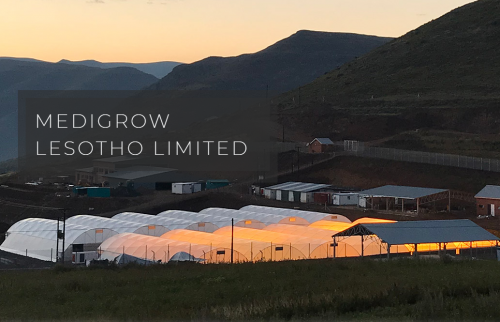 Medigrow’s Twitter feed has a load of images from the facility, and detail about their social impact, and is certainly not the work of an intern.

Then there’s the local media reports.

In an interview with Lesotho Times this week, chief executive Andre Bothma said a lot of work has already been laid down with over $250 million already spent on the project.

“We have already installed the critical infrastructure, water, electricity, tunnels, acquisition of essential expertise and employment of 300 people to date,” Mr Bothma said.

He said their staff compliment includes people with high-end science skills like biochemistry, agricultural sciences and pharmacists among others. While the majority of licence holders are yet to make any movement, Medigrow is already miles ahead and Mr Bothma attributes their achievements to sheer determination.

If that’s not enough for you, here’s some video:

Hot damn I like that video because, for years, I’ve been yelling about how the real opportunity in cannabis is going to be not in smoking, but in using oils in other products, and when that’s the market, suddenly you’re going to need to keep costs down by looking to the developing world.

But not all Lesotho assets are created equal. ICC International (WRLD.U) bought one off a defunct OTC vehicle for $1.5m that saw its CEO heading to jail. In doing the deal, ICC had to admit in official documents that what they bought, well, does not actually constitute a business. 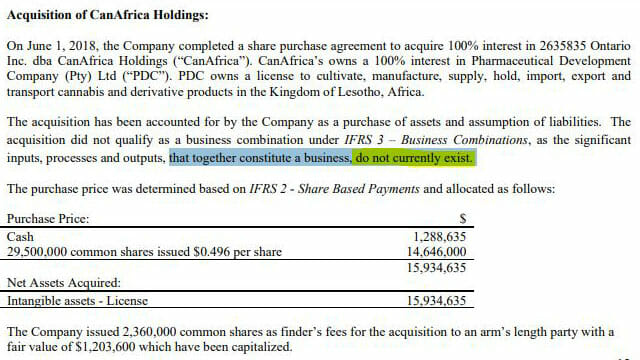 In contrast, Supreme’s Medigrow operation, which is clearly first world in quality (they’re working on getting GMP certified for European exports), but third world in cost, is EXACTLY where I’d want to be placing my bets.

But Supreme CEO Navdeep Dhaliwal hasn’t just grabbed at whatever dinky ass bullshit in a foreign country he can find and burned investor funds on it. In fact, he’s still sitting on $75 million in cash – down only $3 million from the level of the Supreme war chest a year earlier.

In Lesotho, he took the best of breed in return for future supply and $10m cash, and it’s moving fast.

An industrial-grade extractor capable of producing fractioned, higher-margin cannabis oil was installed on-site and has begun producing oil. That oil successfully achieved a positive Certificate of Analysis from a U.S.-based laboratory. Medigrow is also continuing to advance the build out of their cultivation facility which is being constructed in accordance with EU GMP standards. With additional scaling, Supreme Cannabis estimates that Medigrow will have an annual production capacity run rate of 40,000 litres (50% active). With these items in place, Supreme Cannabis and Medigrow are now exploring export opportunities in various international jurisdictions.

Back home, the strategy has been to ignore short term sales blowout thinking and focus on premium product. If it takes longer to get it right, that’s fine. If it means not flooding the market with 67 varieties of Chilliwack ditchweed, so be it.

The result? Jean Guy, which consistently rates among the highest of all products out there on the Canadian market and is also, usually, sold out. 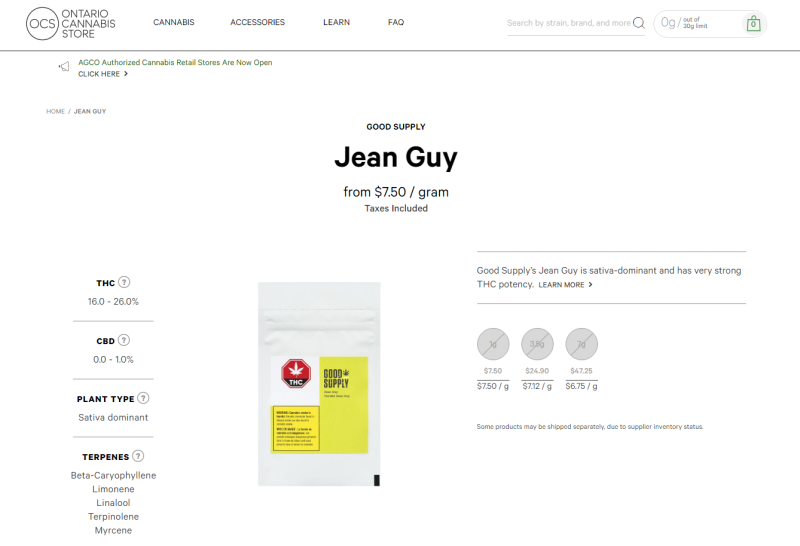 This video sums it up well:

Jean guy from OCS by Supreme… if you liked white widow you’ll love this pic.twitter.com/3P8tJM9uVD

So here we are, Supreme has done all it said it would do and more, it’s global, it’s respected, it’s sales numbers are climbing, so WHY THE HELL ARE YOU PEOPLE NOT EATING UP THE STOCK?

Because they ran a loss in their latest financials?

Again, here’s Supreme’s chart for the last three years, taking all the sector fumbles but few of the gains:

And here’s Cronos’ chart in the same time. 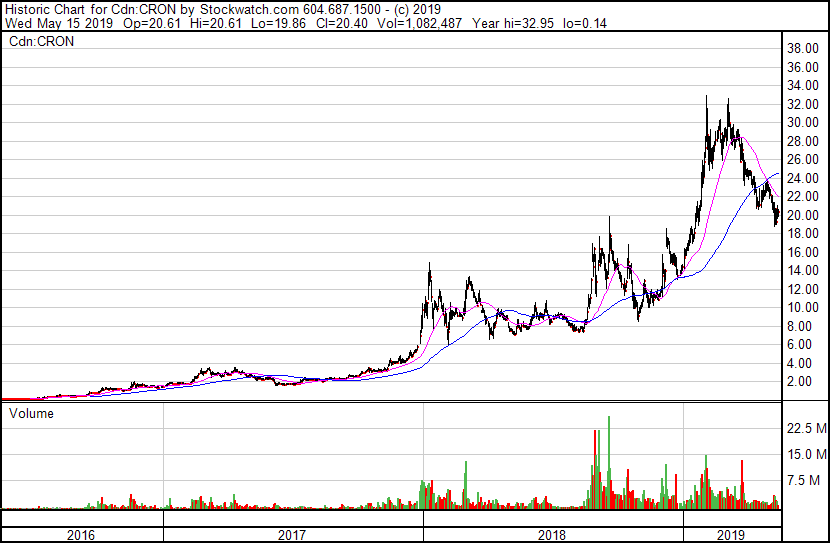 Supreme is a screaming cheap deal for anyone looking for value, stability, top rate management, high quality product and likelihood of customer goodwill in a market where marketing is forbidden.

On current financials and with cash in hand of $75 million, if Supreme didn’t increase revenue or production at all for the next ten quarters, they could stomach the losses and still be operational. On Aurora Cannabis’ most recent loss, if they held similar numbers for the next three quarters, they’d be out of cash.

And what’s the chance Supreme won’t grow from here? Here are the numbers, quarter over quarter. 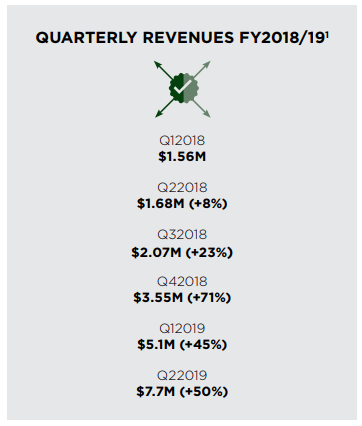 If you, like I do, think the cannabis sector has run rampant on stupid valuations and the promise of one day, maybe, some day, it will all make sense, Supreme is priced at a sensible place that, in order to bring a double, would ‘only’ need to find it’s way to a billion valuation.

To get a double on Canopy Growth Corp (WEED.T), it’d need to hit $40 billion. Aurora would have to hit $22 billion.

My bet is on Supreme getting there first.