Patriot One (PAT.V) has no clue why its share price spiked 40%

The Investment Industry Regulatory Organization of Canada (IIROC), “writes the rules” and “investigates misconduct” in the public markets.

When IIROC identifies a company with anomalous trading volumes and share price movement – it typically asks the company to issue a clarifying statement.

On October 10, 2018 Patriot One (PAT.V) issued a press release “at the request of the IIROC in regard to recent market activity.”

“Management is not aware of any material change in the Company’s business or affairs that would account for the recent share price movement or trading volume of the Company’s common shares,” stated PAT. “The Company has no material information to report at this time.”

Patriot One is a technology company that has developed “Cognitive Microwave Radar” which detects concealed weapons from a compact piece of hardware that can be embedded in wall cavities.

How did Patriot One get on IIROC’s radar?

By kicking some ass over the last three weeks – during a silent period. 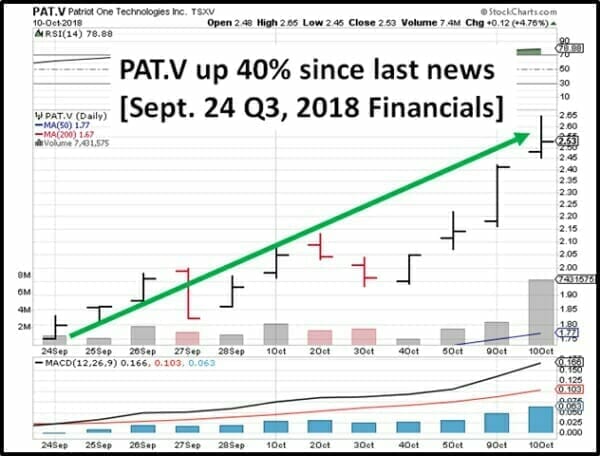 If you look at the blue bars at the bottom of the above chart – you’ll see steadily rising volumes.  It’s a classic case of investors flooding in – driving the price higher as they try to pry stock from existing shareholders who are not sharply motivated to sell.

We will accept PAT’s assertion that there is “no material information to report”.

That said, we have identified three factors conspiring to drive PAT’s stock price up.

There are 1,600 companies listed on the TSX Venture Exchange.  They are all in competition for investment dollars. To get those dollars, they must transmit their message above the ambient noise of the markets.

There are many ways of doing this: trade shows, e.mail blasts, print advertising etc.

Equity Guru’s Capital Markets Program is another mechanism, although it comes with a warning, “Every deal we do with a company buys our attention, not our favour. If your company hits its milestones, we’ll yell about it from the rooftops, but if it doesn’t, we’ll talk about that openly and honestly.”

We’re journalists that don’t just read your press releases and rewrite them. We come into the boardroom and talk to you about your news before it’s posted.  Chris Parry, the founder of Equity Guru, has won two Webster Awards for Excellence in BC Journalism.

This pact is not for everybody – and we don’t pretend it is.

As much as we love our own cooking, there is no question for junior companies – the messaging holy grail is mainstream media attention.  Because it’s free, it has reach, and (despite the notion of “fake news”) still has authority.

PAT “does not chase ambulances”.

In fact, PAT tends to go “radio-silent” after U.S. mass-shootings.

There are simply too many hot-heads in the U.S. with guns.

Back in the day, when investor relations (IR) was called “stock promotion” we were taught to condense the pitch so that it could fit in someone’s hand, be transferred to another hand – without anything slipping between the knuckles.

“Our motto is also our goal,” stated Patriot One CEO Martin Cronin in our first ever interview, “We aim to deter, detect and defend against random acts of senseless violence anywhere innocent people work, live, and play.”

That already-polished pitch is now shined to the point of brilliance.

Beyond the pitch, CEOs need to have answers.  Not just to the easy questions.  But the hard ones.

At 59:00 – one of the tech CEOs turns to Cronin and asks him about Patriot One’s tipping point.

At the end of the video, each of the six CEO’s is asked which of the other stocks they would invest in.  Two of them chose PAT.

We have been tracking PAT for almost two years, writing 23 articles including;

“Patriot One is presently pursuing a number of acquisition transactions, at various stages of development,” stated PAT in response to the 3-week stock run up, “Any such transaction will be fully disclosed if and at such time as it becomes material information regarding the Company. Qq

So, there you have it IIROC.

PAT doesn’t know why the stock price is going up.