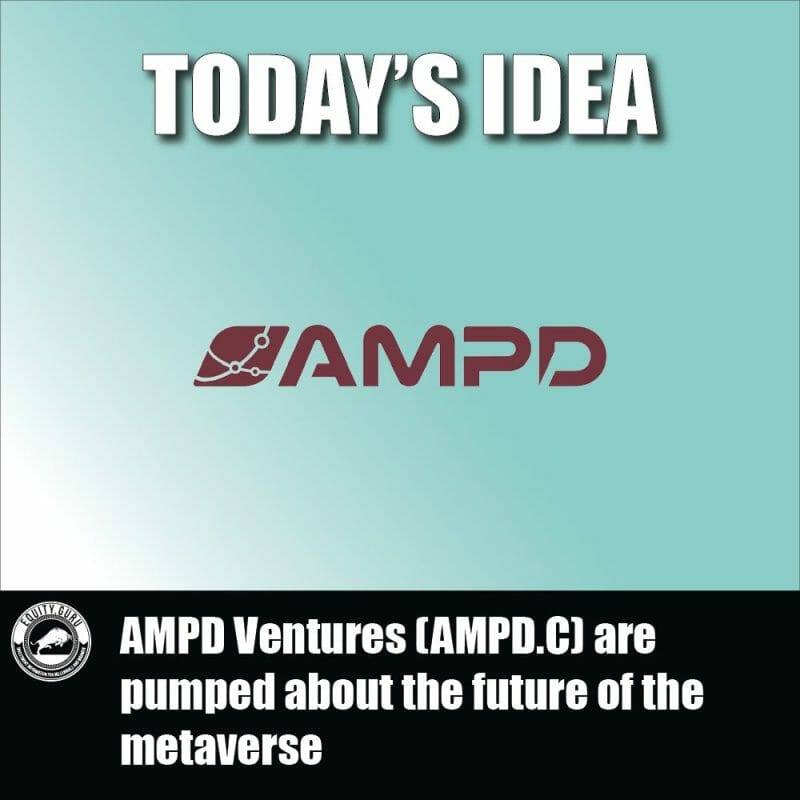 AMPD Ventures (AMPD.C) are pumped about the future of the metaverse

The more I hear about the metaverse the less I’m convinced that it’s going to be the great disruptive, revolutionary next-gen platform many companies are banking on. Instead, it’s probably going to be more like 3D Printing.

Remember the craze around 3D Printing? 3D printing is the building of a three dimensional object from a model. It’s been around for decades in some capacity, but as of 2019 it had advanced to the point where precision, repeatability and the material range of 3D printing made it viable as an industrial-production technology. It does have uses even now. But that’s not how it was sold to us.

It’s 2022 and if we listened to the hype-sters trying to hock these devices, we should have one in every room of the house by now. We don’t. I’ve never even seen one. The reason why 3D printing never took off is because the learning curve was too steep for mass adoption and that’s the road the metaverse (and plenty of other blockchain projects) are looking to follow.

The success of the metaverse depends on the user-experience of the early adopters. You’re always going to have folks lining up to get the latest gadget. If you can get them to dole out the exorbitant price and then give them an experience bordering on transcendent, then they’ll tell their friends, write it on social media, and really do a lot to get it out to their people. Then and only then could this take off.

Anthony Brown and Charles Creighton, CEO’s of AMPD Ventures (AMPD.C) and their subsidiary, Departure Lounge were kind of enough to chat with me to clear up some misconceptions.

At its core, AMPD Ventures specializes in and provides high-performance computing and cloud solution options for next-generation applications to several industry sectors, including digital content, big data analysis and visualization, AI and high-level academic research. It’s recent acquisition of Departure Lounge, and some of the moves said subsidiary has made since, have opened the door for AMPD to expand their reach into the metaverse.

AMPD Ventures has two subsidiaries—AMPD Technologies, which handles the infrastructure play handling the high performance computing angle, and forms the backbone of what they’re trying to make. The second subsidiary is Vancouver-based Departure Lounge which is responsible for the motion capture technologies for the metaverse. They have the cameras, the green screens, the models with the motion capture dots on their faces.

About the UX issue, Creighton said:

“We’re a big B-to-B business. We’re not dealing with consumers and we’re not building our own decentraland or anything.”

That means the learning curve will be covered by seminars, booklets and other material teaching individual businesses how the metaverse platform works with their business. No UX required.

“A lot of people need to rethink their thinking about the metaverse,” Creighton said. “Every company that has a website today will have a spatial site by 2030.”

What he’s talking about is a virtual site located in the metaverse where clients and customers can go to interact. It’s less Playstation 5’s wonky virtual reality setup where you’re still giving commands but not getting any feedback, and more cyberspace. Think: William Gibson’s Neuromancer with completely rendered four-dimensional atmospheric experiences. 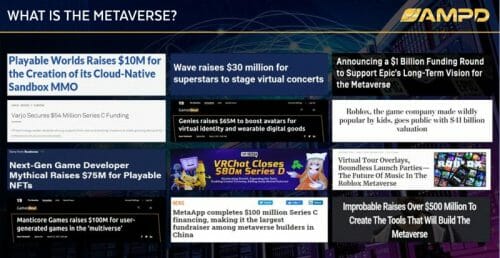 Brown compares the potential of the metaverse to the 1995 era internet.

“The potential applications are even bigger than something as humongous as the internet. It applies to every facet of life – from healthcare, architecture, design, any way in which we interact, the metaverse is going to be involved. It will be mainstream and it will be mainstream very very quickly,” Brown.”

I’m still not convinced. There are two reasons: technological convergence and a catalyst.

Now let’s talk about technological convergence for a moment. Back in the 1980’s our houses were full of various technological wonders from televisions to landlines and calculators, computers and VCR’s. Now all of that and more can be done on our phones. It’s one of the biggest reasons why the mobile phone took off like it did—because it was portable but powerful.

“The Metaverse is the functional successor to the web.”

Here’s what they say about the metaverse in their investor deck:

“The Metaverse is a collective virtual shared space including the sum of all virtual worlds and the Internet, in some cases blended with real life. The Metaverse serves as a functional “successor” to the web — only this time with even greater reach, time spent, and commercial activity generating even greater economic upside than the current Internet. In its full version it becomes the gateway to most digital experiences, a key component of all physical ones, and the next great labor platform.”

Even if I can’t quite bring myself to believe it—I’m confident they do—and their excitement is infectious.

What is AMPD doing now?

These high quality holograms reduce the amount (and therefore the cost) of required postprocessing. These metastage holograms have already shown up in applications from training to fashion to entertainment. This is the platform that Departure Lounge is going to use to transfer people and objects into and out of the metaverse, making this something of a big deal in terms of immersive content.

Beyond that, Departure Lounge has recently entered into a representation and reseller agreement with LA-based ARwall. ARwall provides LED wall virtual production and immersive extended reality (XR) technologies and software.

So basically big expensive cameras that capture the most realistic visual images and make it easier to transport them beyond post-production.

All of this is obviously leading up to their own entry into the metaverse.

Even if the metaverse thing doesn’t take off, there’s still lots of things to love about AMPD.  They’re still a strong infrastructure play, working the picks and shovels of the internet, and making appropriate deals to enhance their revenue-base.  Even if the metaverse doesn’t work out and everyone takes a pass Departure Lounge’s motion capture tech still has plenty of other uses, such as Hollywood North and video game design.

There’s nothing about AMPD’s financial statements that stands out as being out of the ordinary. Between May of last year and their latest reporting date in February, they dealt with their remaining convertible debentures and their debt-line shows perfectly reasonable loans and leases for a company of this size and age.

The releases show a cash position of $4.1 million, but that was four months ago and the company has been rather busy forging partnerships and making deals. Getting into the metaverse is far from cheap, but if done right (and a little luck falls their way) it could be considerably lucrative.

The asset to liability scales tip heavily in the favour of assets, which provides strong shareholder equity, and is a strong indicator that this company’s trajectory is upwards. Given how the rest of the blockchain sector, including coins and companies, are trending, that’s definitely a step in the right direction.

This week in tech: there’s always an alternative edition