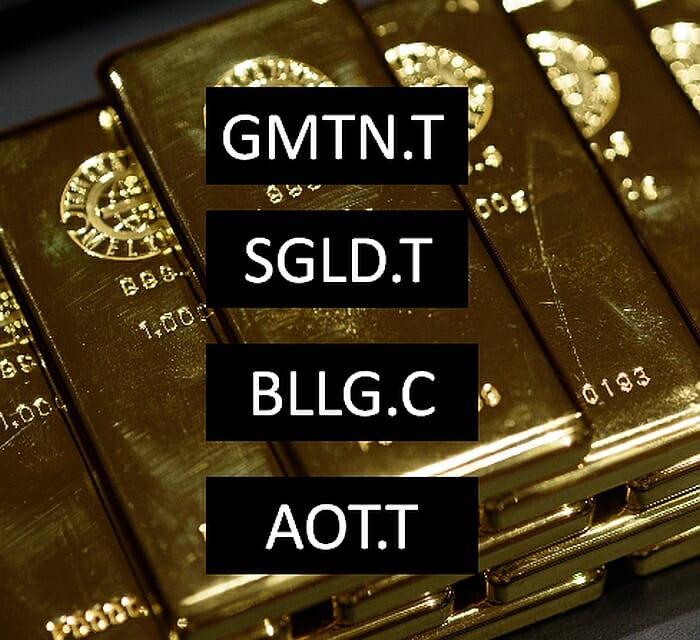 If you’ve ever loved someone and waited patiently for them to love you back – you know what’s it’s like to be a gold investor in 2021.

At some point in 2021, most gold investors have asked themselves: am I on the wrong train?

Some Bitcoin holders are questioning the fundamental value of their investment.

“It scares me that not a single person has ever been able to tell me how I should value cryptocurrency,” stated one investor on a bull-board, “Because there are only so many Bitcoins doesn’t cut it. There’s only one of me too and that doesn’t imply value, only scarcity.”

Today, we are going to feature a curated list a four gold companies targeting “near term production”.

We rejected a number of companies that claimed to be “near term gold producers” – because they had baked in risks factors (debt/permitting/environmental/share structure/community relations/operational) that put those claims in doubt.

Historically, when the price of gold spikes, there’s a stampede of money into gold juniors.

Gold developers with a viable near-term pathway to production can generate life-changing wealth for shareholders who accumulate positions while the markets are gloomy.

Gold Mountain Mining (GMTN.T) is an $89 million gold and silver company focused on resource expansion and near term production at the Elk Gold Project, a past-producing mine located 57 kilometers from Merritt in South Central British Columbia.

On December 1, 2021 GMTN announced it hit one of the widest intercepts ever recorded at the Elk Gold project during its Phase II, Siwash North drill program.

Phase II drill program is complete and GMTN is waiting for the results from its final drill holes from the Lake, South and Elusive Zones.

“When we acquired this project from Equinox in 2019, many believed that all of the Elk’s exploration upside had been realized and that drill programs would struggle to add value,” stated Gold Mountain’s CEO and Director, Kevin Smith.

“Our drills continue connecting with high grade mineralization and this latest bonanza grade intercept should show the market Elk’s significant upside potential,” added Smith. “With almost all the assays from Phase II Siwash North drilling back from the lab, we now await the updated geological model.”

“Based on the quality of these intercepts we continue to see, management is very keen to see how these grades play into our upcoming resource estimate.” 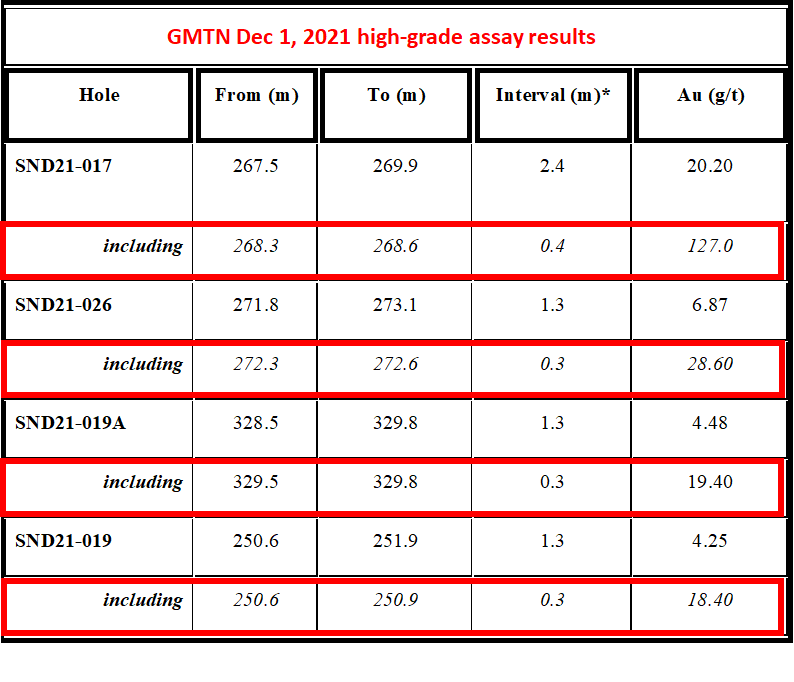 “Since acquiring the project in 2019, with the inclusion of yesterday’s news event, the Company has succeeded in tripling the resource base at Elk—an extensive network of high-grade veins is emerging here,” reported Equity Guru’s Greg Nolan a week later.

“For a junior, delineating a weighty ounce count is one thing, but doing so while ramping up to commercial production is quite another.

A recently revised mine plan, which broadened an ore purchase agreement that was already in place with New Gold, pushed the project further along the curve.

This revised mine plan eighty-sixes previous designs to build a mill on-site for production years 4 thru 11—ore delivered to the New Afton mill will increase markedly, from 70k to 350k tonnes per annum. This move not only slashes the project’s CapEx, but will also drive down Elk’s all-in sustaining costs (AISC) from $735/ounce to $554/ounce.

The following is a summary of Elk’s compelling economics:

A gentle slope on the permitting curve, an appreciably reduced CapEx, and all-in sustaining costs at the lower end of the range for a gold producer will give rise to fatter profits and greatly reduced project risk.” – End of Nolan. 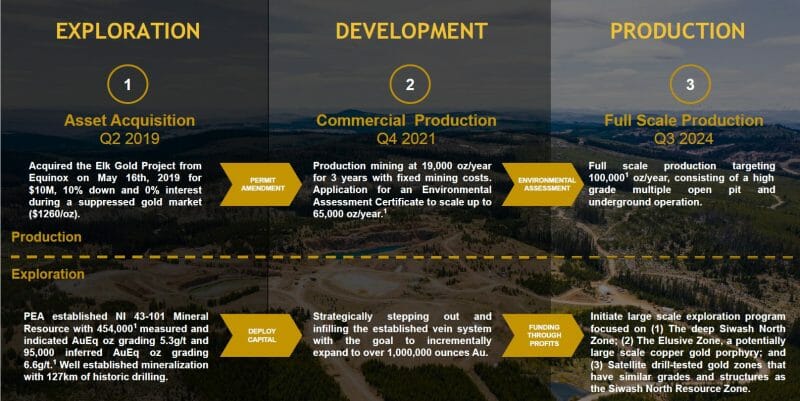 Sabre Gold (SGLD.T) – a $41 million company – is a multi-asset near-term gold producer in North America which holds 100% ownership of both the fully permitted Copperstone gold mine located in Arizona, U.S. and the Brewery Creek gold mine located in Yukon, Canada, both of which are former producers.

Management intends to restart production at Copperstone followed by Brewery Creek in the near term. Sabre Gold also holds other investments and projects at varying stages of development.

The improved classification of measured and indicated mineral resources increased by 355,000 ounces gold (32%) in all categories and is a result of the Preliminary Economic Assessment (PEA) that is nearing completion with results to be provided in January 2022.

Bonifacio and his team are focused on putting the Copperstone Arizona project into productions first, which means the market tends to discount positive news flow coming from Beaver Creek.

An October 13, 2021 news release include the following update on the Copperstone project:

“We’re taking the Copperstone project into production,” Bonifacio told SNN on September 14, 2021, “We’ve got the balance sheet to do that.”

“Most of the Directors and Officers are significant shareholders,” added Bonifacio, “We have a lot of skin in the game. We’ve written some big checks, and we will continue to do so as needed.”

According to filings on Canadian Insider, Bonifacio has been buying SGLD shares aggressively on the open market. 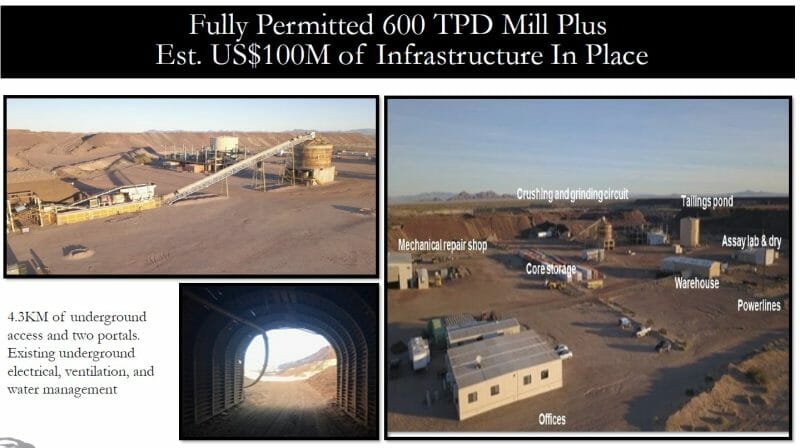 The future mine site is a 50 minutes drive from the town of Smithers, located in northwestern British Columbia.

To date, BLLG has completed 20,627 meters of diamond drilling since the beginning of the 2021 drilling program announced on January 11, 2021.

Highlights of the most recent assay results include:

“We look forward to receipt of assays from the twenty additional holes completed in the CSZ as well as results from the new Federal Zone,” added Cronk.

Phase One drilling, completed earlier this year, encompassed 7,176.5 meters in 32 holes, and to date, 49 holes totaling 13,446.5 meters have been drilled as part of the Company’s Phase Two program.

Drilling is ongoing with two diamond drills operating around the clock and will continue until on or about December 15, 2021 and will recommence in early January 2022.

Due to slow lab turn-around times BLLG is waiting for assay results from more than 30 holes.

The Dome Mountain Gold Project holds both an Environmental Management Act Permit (EMA) and a Mining Permit providing for up to 75,000 tonnes production annually.

In addition, the property has 15 known high grade gold veins with 90% of the nearly 19,000-hectare property yet to be explored.

Expenditures on the mine by past operators, including Gavin Mines, Timmins and Noranda, have totaled in excess of $68 million.

The following parameters were used for the resource estimation:

Blue Lagoon has not announced a final production decision at this time.

Ascot is committed to the safe and responsible development of Premier in collaboration with Nisga’a Nation as outlined in the Benefits Agreement.

Highlights from the drill results include:

“In similar fashion to the Day Zone and Premier West, the Sebakwe Zone represents yet another exciting opportunity for Ascot to discover accretive, high-grade mineralization close to existing infrastructure and current underground resources,” stated Derek White, President and CEO of Ascot.

“Given the sparse historical drilling, the mapped structural geometry, and the strong IP signature, we knew Sebakwe was highly prospective for high-grade gold mineralization,” added White, “However, we were still pleasantly surprised by the impressive result of 36.2 g/t over 7.1m, including two very high-grade sub-intervals grading over 100 g/t and containing coarse visible gold”.

On December 7, 2021 Ascot announced the receipt of the Mines Act Permit for construction and operation of the Premier Gold Project.

The B.C. Ministry of Energy, Mines and Low Carbon Innovation has issued to Ascot the M-179 Mines Act Permit, enabling the restart of operations at PGP.

In addition, Ascot anticipates the Ministry of Environment and Climate Change Strategy to imminently issue the Environmental Management Act Permit PE-8044, for which there are no further outstanding information requests.

Ascot will now evaluate and prepare for an optimal transition from Early Works to full-scale construction.

The receipt of the final permits is one of the key conditions to draw down the remaining US$75M under the Company’s project finance facility.

“We would like to thank our shareholders, Nis g a’a Nation and the local towns of Stewart, B.C. and Hyder, Alaska for their support as we progressed through the permitting process and are looking forward to the next chapter as we advance Canada’s next gold mine towards production,” stated White.

“This project will be a welcome source of employment for hundreds of people who live in the Northwest,” said Bruce Ralston, Minister of Energy, Mines and Low Carbon Innovation. “Ascot Resources Ltd. is working with Nis g a’a Nation to bring good-paying jobs to the community and those who live around Stewart, B.C.”

“The Nis g a’a Nation have worked in extensive collaboration with Ascot throughout the permitting process, including through the Mine Review Committee process leading up to the granting of the permit,” stated Eva Clayton, President of Nis g a’a Lisims Government. “We look forward to our continued collaboration with Ascot in the full-scale construction and operation phases of the Project.”

During the approximate 12-month construction phase, Ascot expects the project to employ a peak of approximately 140 people, and in operation the mine will directly employ approximately 280 people.

Over the initial 8-year mine life, Ascot expects to invest C$353M in initial and sustaining capital and incur C$884M in operating expenses, the vast majority of which would be spent locally and in the province.

The mine is also expected to generate approximately C$403M in provincial and federal taxes and C$746M in after-tax free cash flow based on current spot metal prices.

A cargo ship travelling from China to Vancouver, carrying a majority of Ascot’s clarifier and thickener components, lost its cargo at sea in a major storm event.

The financial cost of replacement will be covered by insurance, but the additional time to fabricate and ship replacement components is expected to cause a delay in the overall project schedule.

In Ascot’s currently contemplated underground development sequence, by starting in April 2022 initial ore could potentially be accessed by October, enabling process plant commissioning by the end of 2022.

As a result, the target date for initial gold production has shifted by one quarter from Q4 2022 to Q1 2023. 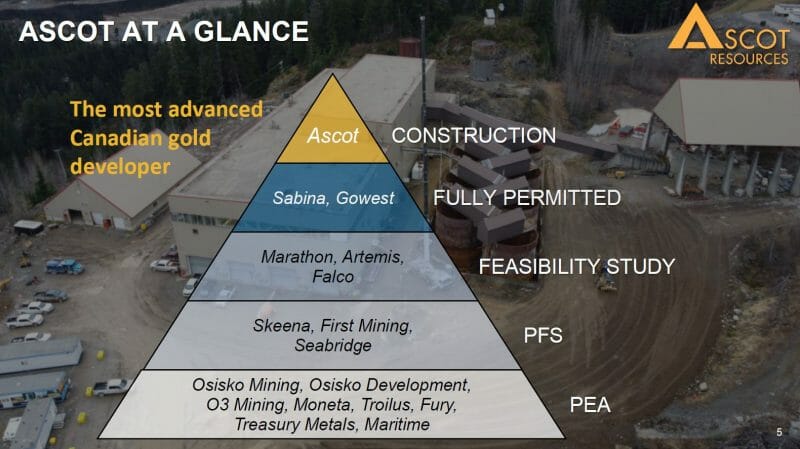 “The reason why people are buying bitcoin and cryptocurrencies at the moment is highly speculative,” stated GraniteShares founder and CEO Will Rhind, “The reason why people are buying gold at this point is much more defensive. It’s around the inflation story. It’s around the long-term preservation of capital or purchasing power.”

With commercial production on the horizon, Gold Mountain (GMTN.T), Sabre Gold (SGLD.T), Blue Lagoon (BLLG.C) and Ascot (AOT.T) are heavily levered to the near and medium-term price of gold.

Full Disclosure: Gold Mountain is an Equity Guru marketing client. We have no financial relationship with the other gold companies mentioned in this article. 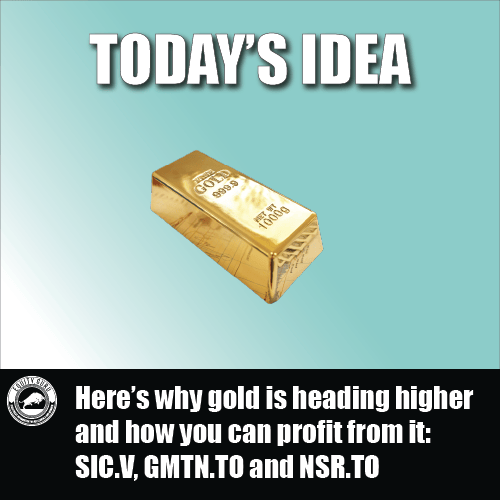 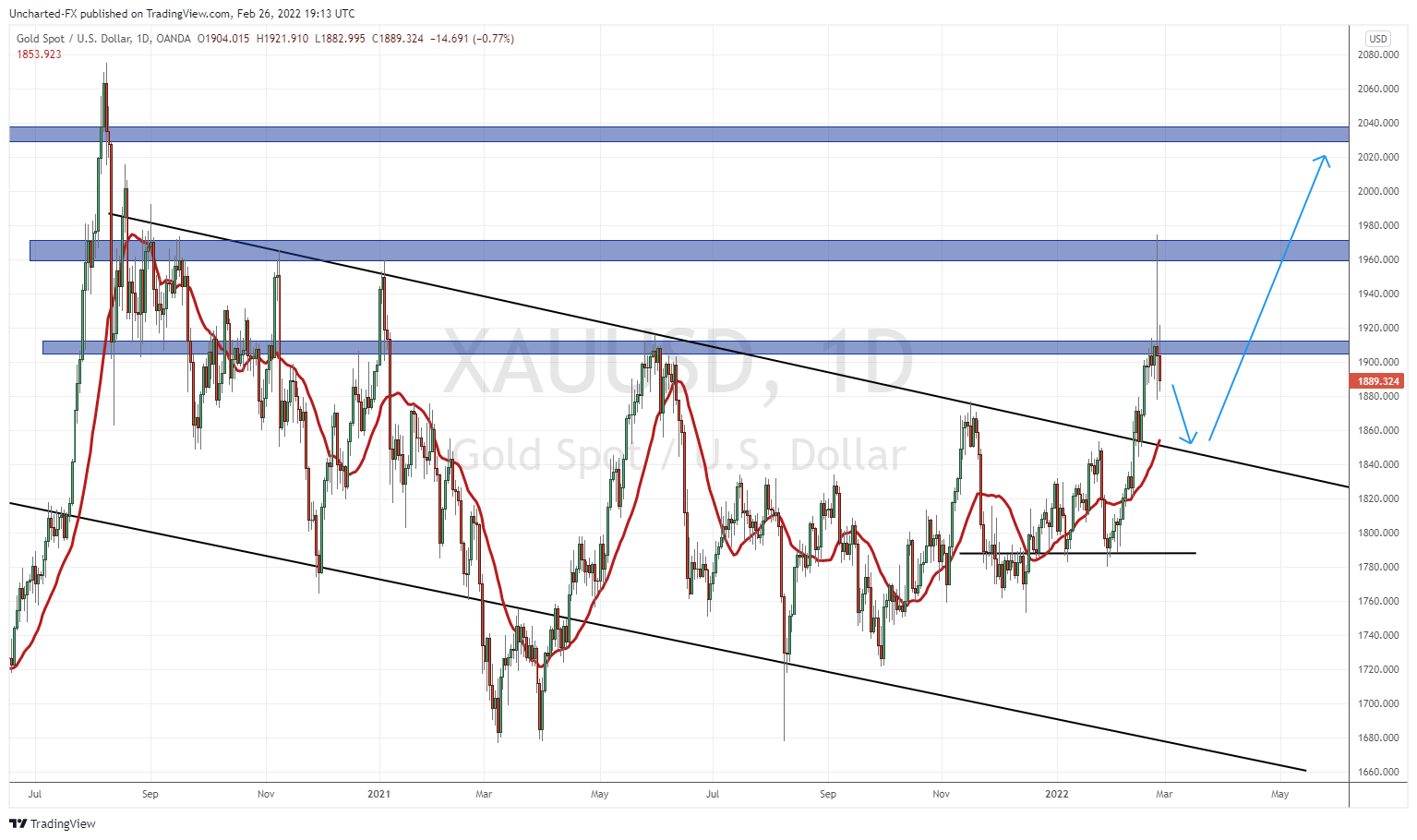 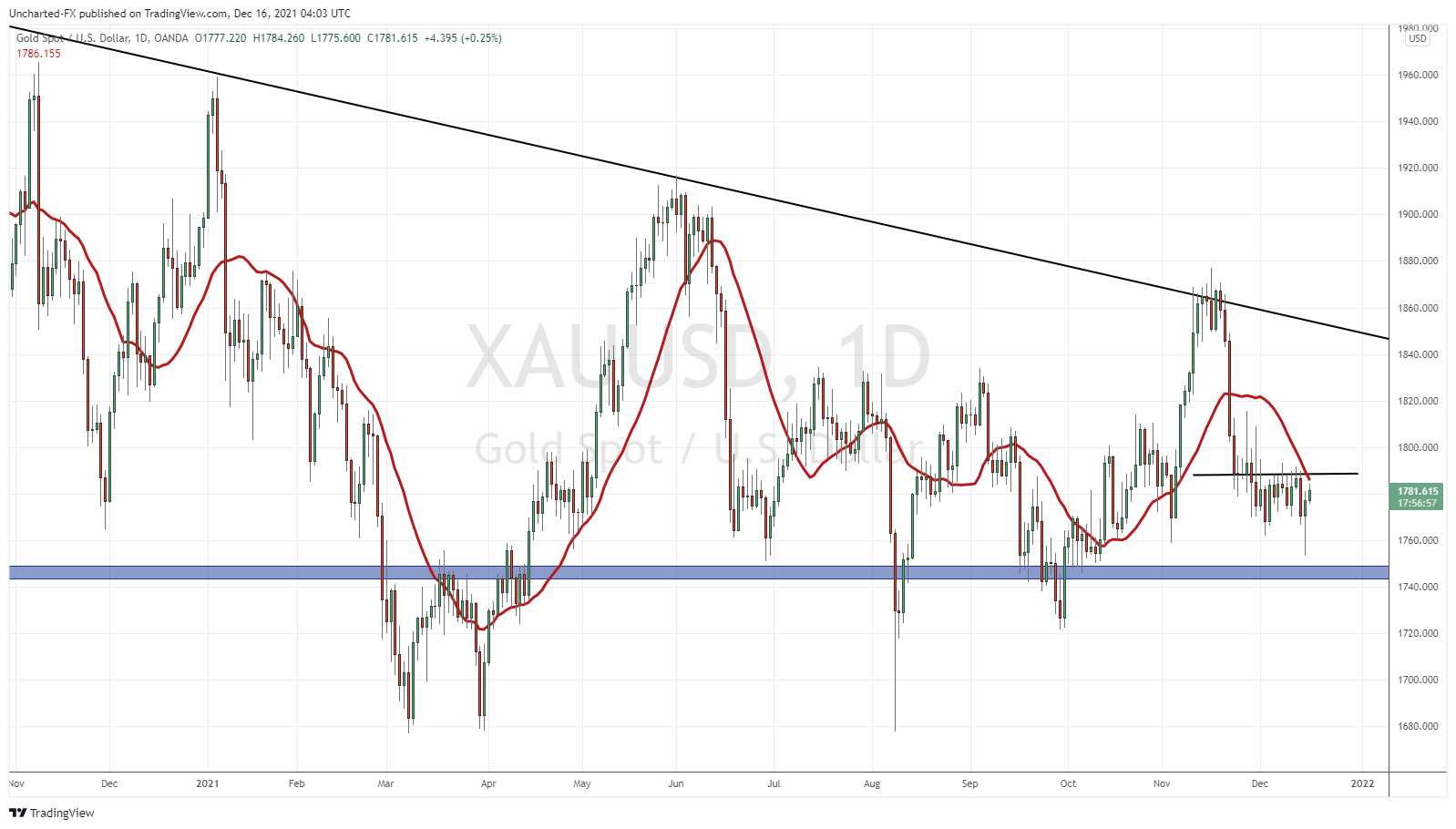 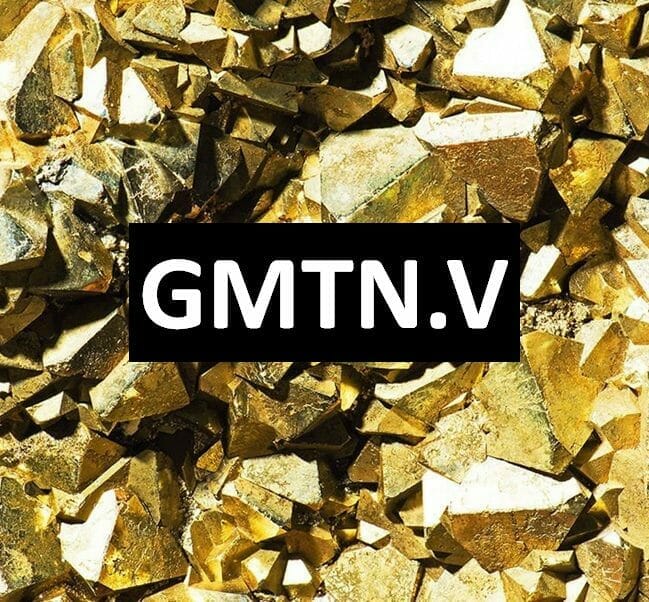 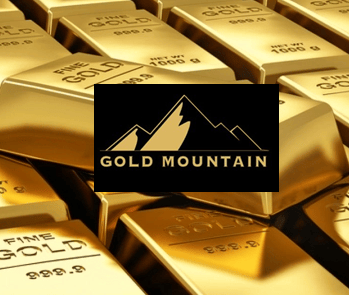 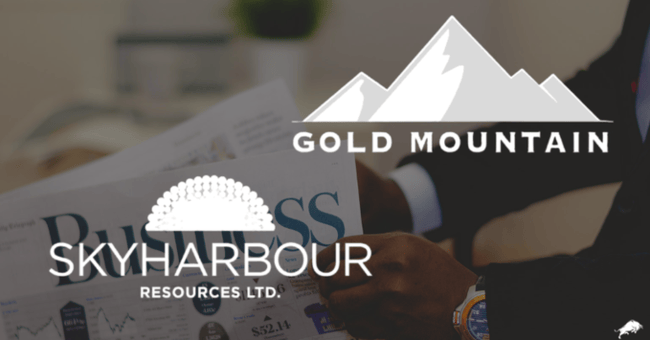