Here’s a question for you (economic) analyst types out there: Inflation, is it here to stay, or is it merely a transitory phenomenon?

Federal Reserve Chair Jerome Powell will have you believe it’s the latter, sighting temporary supply chain bottlenecks and price pressure in only a few categories (flights, hotels, services). Others, perhaps those with a better grasp of the processional effect currently in play, believe it’s the former, that this current price pressure is more pervasive and is working its way through the system.

Hailed as one of the more influential investors of our time, BlackRock’s CEO Larry Fink believes this inflation is more than a fleeting affair and that the Fed will need to take action.

Warning that the threat is falling on deaf ears, Fink recently stated, “Most people haven’t had a forty-plus year career, and they’ve only seen declining inflation over the last 30-plus years. So this is going to be a pretty big shock“.

JPMorgan’s CEO Jamie Dimon too doesn’t see this current price pressure as short-lived and believes the Fed will begin tapering once the unemployment rate reaches 4.5% (unemployment currently sits at 5.4%).

In a recent interview, Dimon opined, “You still have a lot of stimulus that hasn’t been spent, and a lot more stimulus coming. You know, having fiscal deficit that big is unprecedented, and that by itself almost has to be inflationary“.

Former Treasury Secretary Steven Mnuchin on Powell’s assertion that this current price pressure is merely transitory: “I respectfully disagree with him on his not being concerned. It’s important for the Fed to get ahead of the curve so that we don’t end up with 4 percent or 5 percent interest rates … the Fed has to normalize.”

Mnuchin believes inflation will force the Fed to tighten monetary policy in the coming months and years—a scenario that will catch many investors off guard.

In a recent interview with Adrian Day (Adrian Day Asset Management), when asked if the Fed should begin tightening, Day exclaimed, “Absolutely… it’s outrageous that interest rates are where they are. Ultra-low interest rates distort everything“.

Artificially low (manipulated) interest rates, and the trillions of dollars conjured out of thin air by the Fed, have created bubbles across multiple asset classes. The steep (decade-long) trajectory of the Nasdaq Composite index is a stunning example of this phenomenon. 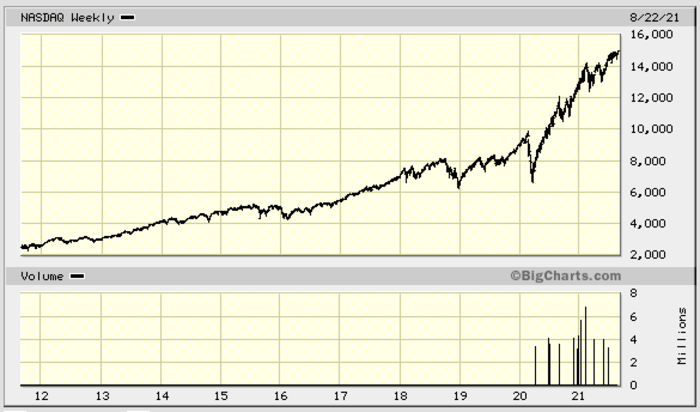 What’s worse, all of this easy money sloshing around the system encouraged individuals and corporations to take on heaps of debt.

Concerning the US Federal government and its massive debt load, Adrian Day believes that if interest rates were to creep back up to the halfway point of their 25-year average, servicing this debt would take up 25% to 30% of the federal budget—a predicament that would prove unsustainable… a predicament that would usher in a crisis of epic proportions.

Many believe the Fed is hopelessly trapped.

These artificially low rates also penalize those who have retired in recent years—those unable to find sufficient yield to ride out their retreat. Many of these aged investors are forced to become speculators… stock pickers. And not everyone has that gift.

I’m sure the vast majority of these folk would prefer to while away their twilight years enjoying the simple pleasures in life—hanging with their grandkids, rocking a porch swing sipping homebrew, playing Parcheesi—rather than being fused to their computer screens, overwrought, grinding away their enamel.

Gold and the companies that make the metal their beeswax

Recent extreme volatility aside, Gold (IMVHO) is the one asset class that will hold its value no matter what—no matter what prank our central bank pulls next.

At the risk of being labeled a gold bug, I believe the metal is the ultimate hedge against inflation and (currency) debasement—try as they may, it can’t be rammed through a printing press. Or, as my friend and colleague is oft heard to say, “No act of Congress can magically make a tonne of gold appear on the lawn of the White House“.

Gold stocks—the producers, developers, and explorers—offer varying degrees of safety and leverage. Generally speaking, the smaller the market cap, the higher the risk (those with bad tickers should avoid the pure exploration plays).

Royalty and streaming companies represent a compelling option for those seeking exposure to the metal. Depending on how the company is structured and positioned, they can offer leverage to rising Au prices, as well as a measure of safety.

Right from the get-go, Nomad set out to ink high-quality deals, adding to an already robust project portfolio of producing and advanced-stage assets.

Since its debut on the TSX some 14 months back, Nomad management has been successfully executing on multiple fronts. 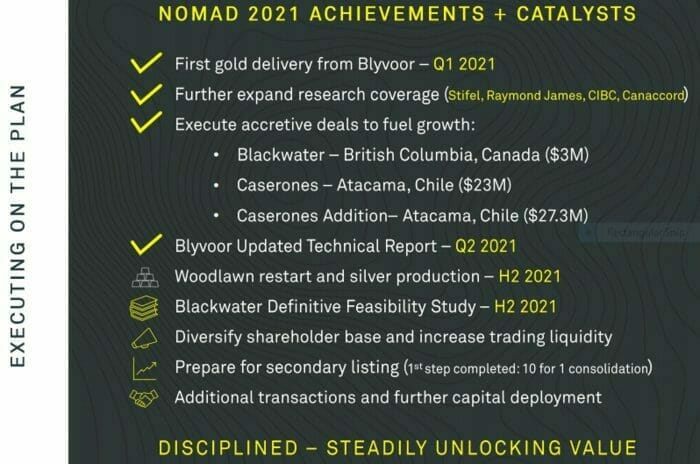 The crew behind Nomad is solid. Super solid.

Nomad’s current portfolio consists of 15 royalty and streaming assets, EIGHT of which are producing and cash flowing. This is what differentiates Nomad from the rest of the junior and intermediate royalty / streaming pack.

Once Blyvoor is fully ramped up to its full run rate… 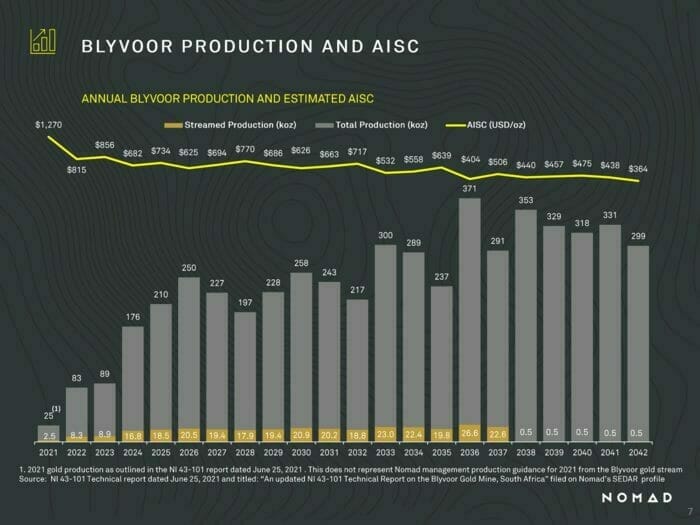 … the deliveries from this mine will be substantial. 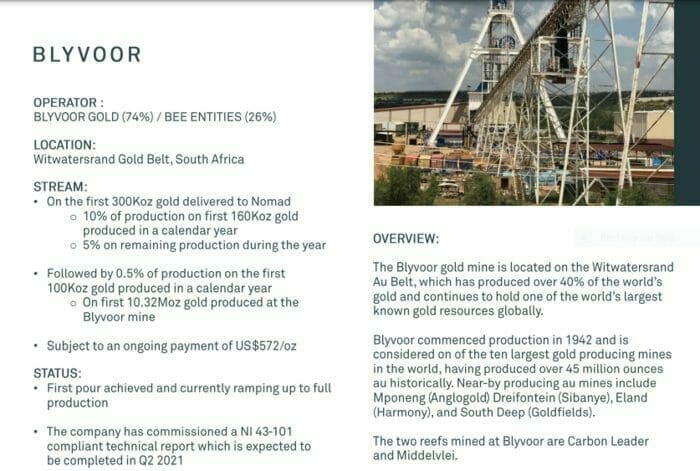 (The technical report referenced above was published on June 28th, 2021)

This producing Witwatersand asset is a rare asset, for any royalty company, big or small.

Of these eight producing assets, Caserones represents the Company’s most recent acquisition. Located in the Atacama region of Chile—a Tier 1 mining jurisdiction—mineral reserves at Caserones are currently good for 17 years with LOM average payable production of 148kt Copper Equivalent (CuEq).

Though the Company’s primary focus is precious metals, Caserones provides meaningful exposure to Cu, a key commodity in the green energy revolution.

In an August 19th press release—Nomad Acquires Additional Royalty on the Caserones Mine in Chile—Nomad announced having upped its stake in Caserones from a 0.28% net smelter return royalty (NSR) to an effective 0.631% NSR royalty on this massive 17,000-hectare project. 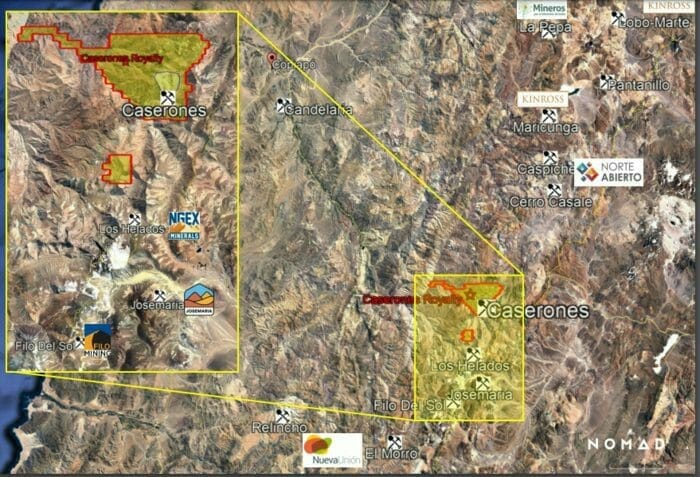 At first glance, a 0.631% NSR may appear modest, but Caserones is a robust producer—a long-life asset with considerable resource expansion and exploration upside.

The setting here is infrastructure-rich—the project has seen a total investment of US$4.2B over the years. 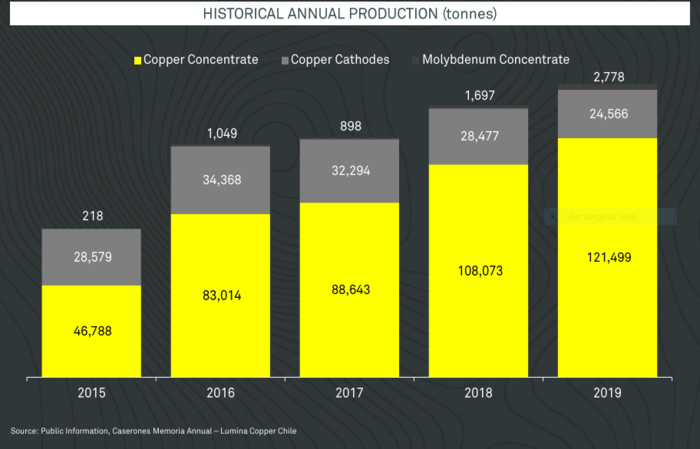 To complete this most recent acquisition—an additional (effective) 0.351% NSR for a cash consideration of US$27.25 million—the Company will draw funds from its $75M revolving credit facility. The total investment for this effective 0.631% NSR works out to $50.25M.

This recent interview with Joseph de la Plante, Nomad’s CIO, offers an excellent overview of Blyvoor, Caserones, and its hugely prospective Roberston royalty asset in Nevada (my favorite of the lot)…

Just the other day, on August 23rd, Nomad dropped the following headline:

The Company’s common shares have been approved for trading on the New York Stock Exchange. Trading is expected to commence within the next week or two under the symbol NSR.

“Listing on the NYSE represents a significant milestone in the growth of the Company. The listing will materially increase Nomad’s exposure to a larger and more diverse group of institutional and retail investors as we continue to grow our portfolio of precious metals royalties and streams. We strongly believe the listing will improve trading liquidity and expand our globally diverse shareholder base.”

A bigger market, more liquidity—”a larger and more diverse group of institutional and retail investors”—this NYSE listing will allow institutions to take advantage of these ridiculous price levels with much greater ease.

Lousy investor sentiment and extreme volatility—volatility heightened by a “gunning for the stops” move that triggered a flash crash earlier this month—characterize the current market in gold.

But a powerful $20-plus move staged on August 23rd pushed the metal back above the important $1800 level.

“… growing expectations that real rates will continue very much in accommodative territory, despite the oft-discussed Fed taper announcement later in the year, prompted money managers to also grow long exposure to capture the upside.”

On deck is Jackson Hole, and the dovish vibe that may take hold once the Fed Chair begins flapping his gums.

Once the bull market in precious metals kicks back into gear, and I’m convinced it will with a vengeance, the pedigree of this management team and the quality of their stable of producing and development assets should draw significant bids from a growing number of institutions looking for exposure to the precious metal royalty arena.

Full disclosure: Nomad is not an Equity Guru marketing client.