Arizona Metals (AMC.V): How Equity.Guru helped you find an 8-bagger

All too often, we write a story about a company, the company does well, stock goes up, people make money and then we move on without celebrating our wins. Today I figured it was worth going the other way and doing a ‘success forensic,’ because when you manage to pick an 8-bagger, it makes sense to learn how it happened.

Arizona Metals (AMC.V), a gold explorer anchored in the US, is a massive win. 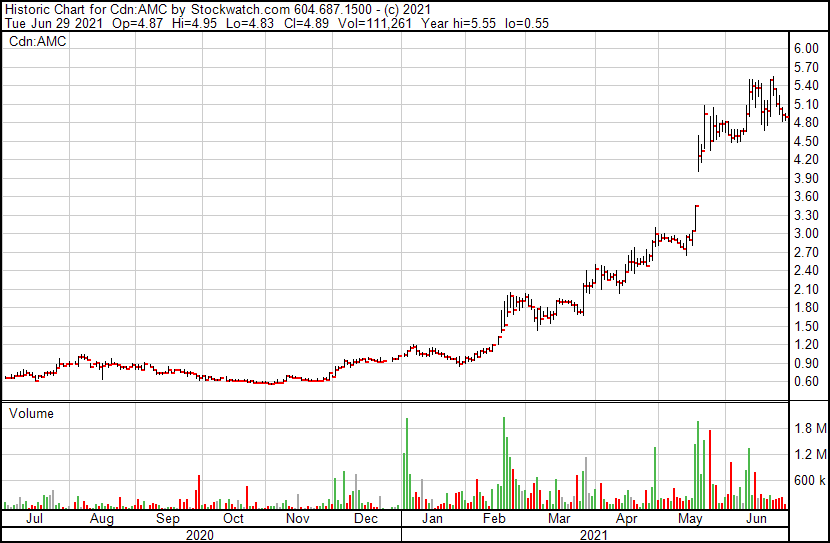 But when we first told you about it, it was not a beauty at all. Things were on a knife edge.

Our Greg Nolan first unearthed the Arizona Metals story, back when it was headed downward, nearly halving inside two months. Greg liked the outlook but the company had it all to do. 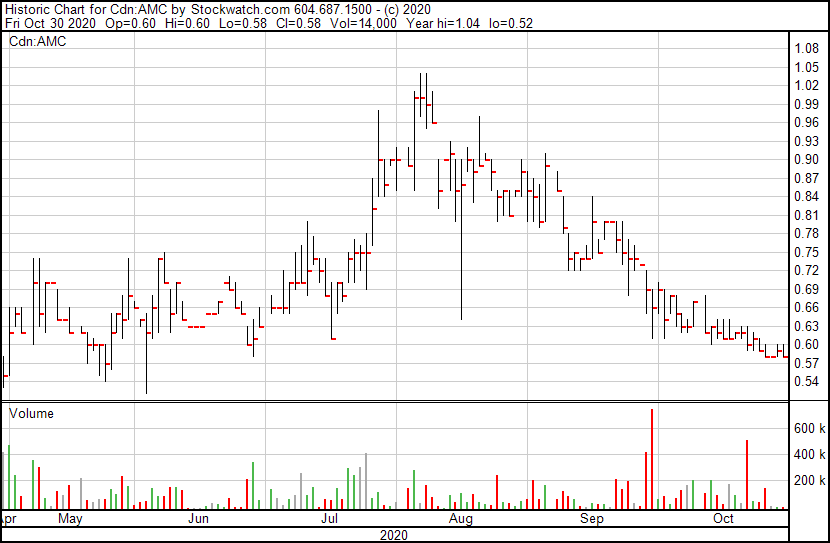 His conclusion in that debut piece:

The company’s recent success with the drill bit is geological sleuthing at its very best.

The two geophysical anomalies at the Kay Mine project, should the company hit during the upcoming drilling campaign, could really move the needle for this play.

The goal at the Kay Mine project is achieving scale. If the company can delineate, say, 20-plus million tonnes of Au-Cu rich material… this could turn into a serious home run for the company, and its shareholders.

With the roadmap and credentials established, it was now up to the Arizona Metals team to achieve what they said they would achieve.

A month later, another piece of the puzzle dropped.

SRK’s review concluded that there is sufficient evidence from historic records and recent exploration drilling and structural geological mapping by Arizona Metals to conclude that “the Kay Mine has similar metallurgical characteristics and similar grades to the likes of Hudbay’s 777 and Lalor Mines, and Glencore’s Kidd Creek Mine”.

Similar style as other successes, and similar ground too:

“This particular region played host to 60 past-producing underground Cu-Au-Zn VMS mines, all within a 150-kilometer radius of the Kay Mine Project.”

Closeology is no guarantee of success, but it sure as hell doesn’t hurt to be digging near others who have achieved success in their digging.

Nolan had set the table by exposing audiences to AMC’s potential, now it was up to the company to show it was serious about unearthing that potential. Boy howdy, did they. 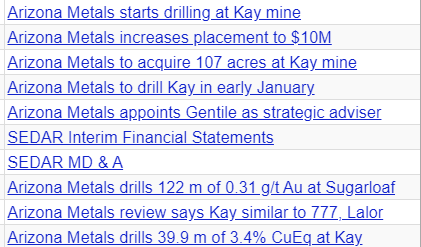 In mineral exploration, there are three ways a drill program can go.

By far, the worst result is the third result because a slow death is many times worse than a sudden death.

Arizona Metals has managed to fire off good results on the regular, and by January was raising an eight-digit amount to ramp things up.

and while that was reflected in a stronger stock price (the company had reclaimed the stock price that had halved a few month earlier), it was still a LONG way from the promised land. 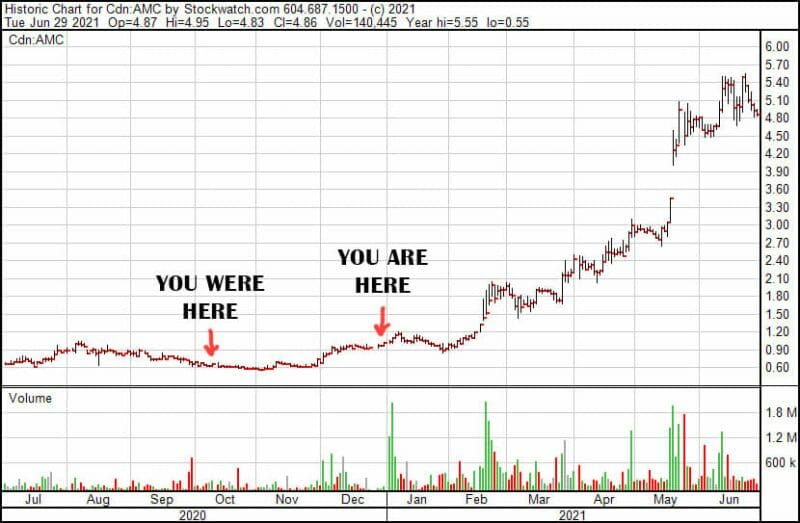 At this point, some folks may have figured they’d missed the run. But that’s small time thinking. There was still a lot of room to move, and move it did.

COPPER PRICES ON A RUN:

This VMS district is credited with roughly 4 billion pounds of copper production over its century-long run. Grades typically ran 3.5%. [AMC has a rich dose of copper, alongside the gold]

“We are pleased to have commenced the Phase 2 drill program, which we believe has the potential to significantly expand the scope and scale of the Kay project, well beyond the boundaries of the 5.8 million tonne historic estimate* outlined by Exxon Minerals in 1982. Our successful Phase 1 drill program greatly increased our confidence in the model. Drilling encountered massive sulphides in 19 of 20 holes.”

By April, AMC was not just ramping up drilling, but having money shoved at it at a furious rate by people in the know who control enough capital to seriously move stock prices.

A $5m raise quickly oversubscribed and shot to $10m, and was followed by a $15m at double the price of the previous raise that, before it could be closed, had moved up to $21m. The $3 warrant attached to that has since been blown right by, meaning the company has brought in millions more in cash since.

At this point, some would look at the stock chart and think, well, it’s tripled in value in six months.. what possible reason could I have to get in now, when all the value has been had? 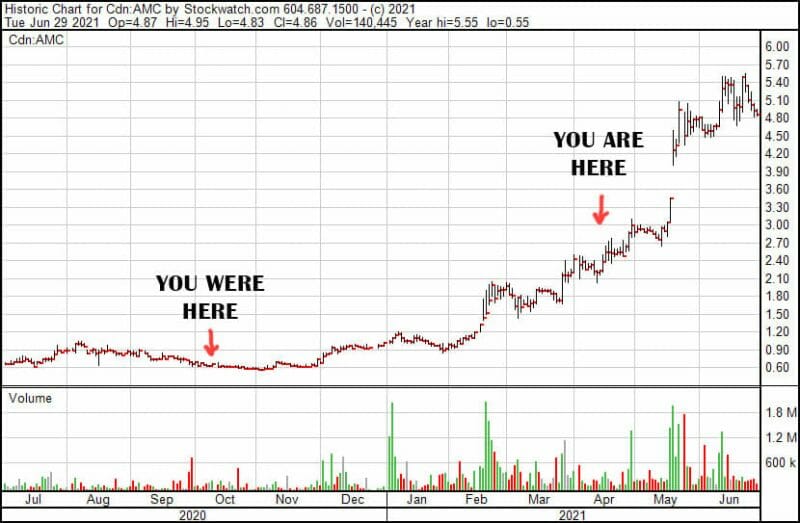 Arizona Metals Corp. has discovered a new gold-rich zone of open-ended mineralization at the Kay mine, in an area previously untested by historic drilling or exploration. In addition, all seven recently completed holes at the Kay mine project in Yavapai county, Arizona, intersected massive sulphide mineralization.

The stock touched $5.60 before settling a little in typical summer fashion to $4.80, a price where just about everyone associated with the company can say, “I’m on a big win here.”

AMC still has plenty to do. If the intention is to build a producing mine or two, they’re on their way, but more drilling and discovering and executing will certainly put more upward pressure on that stock price.

It’s an 8-bagger now. Convinced yet?

FULL DISCLOSURE: Arizona Metals is an Equity.Guru marketing client, and we own stock in the company 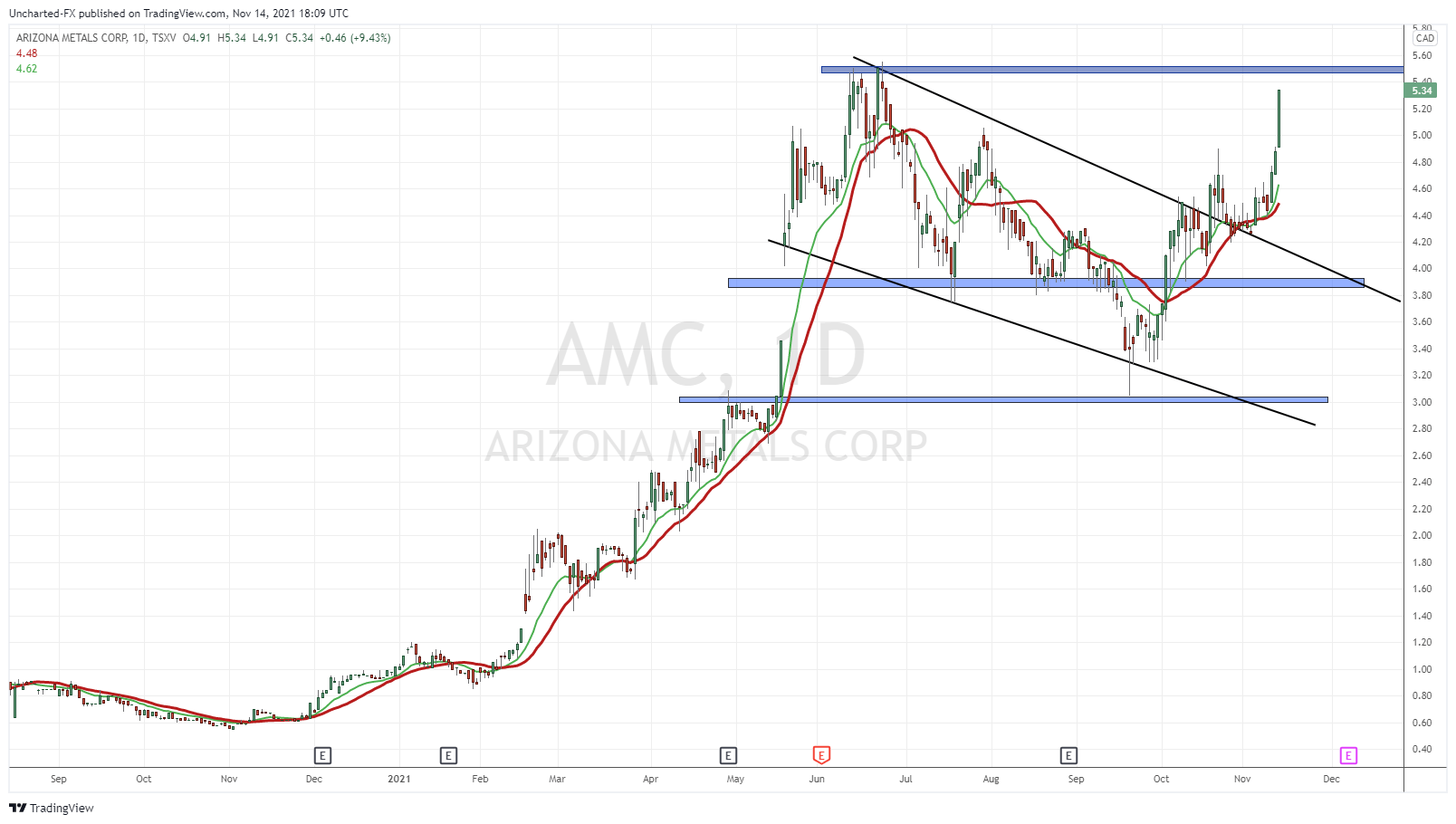 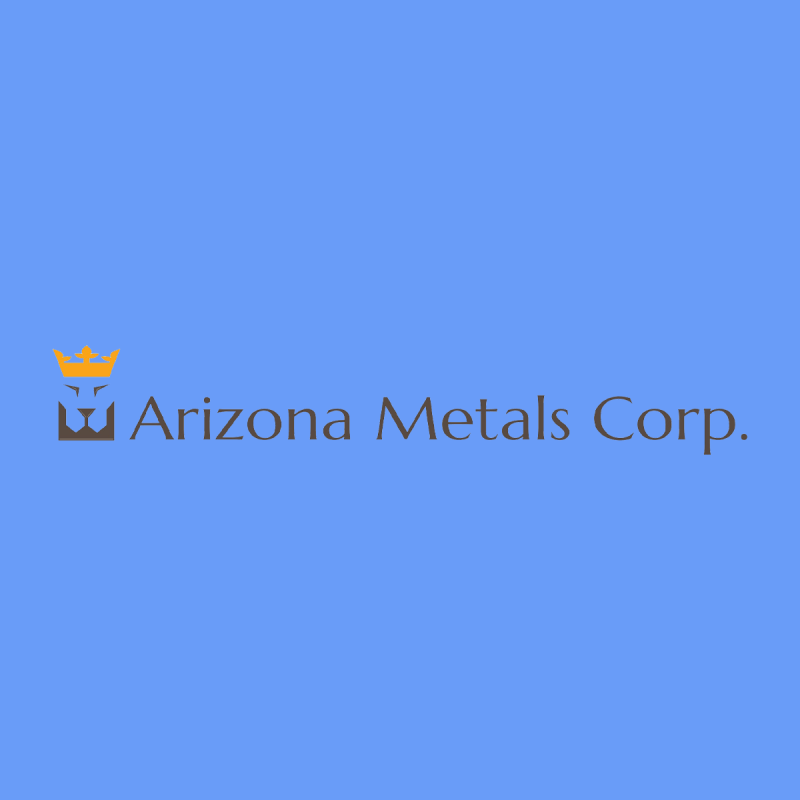 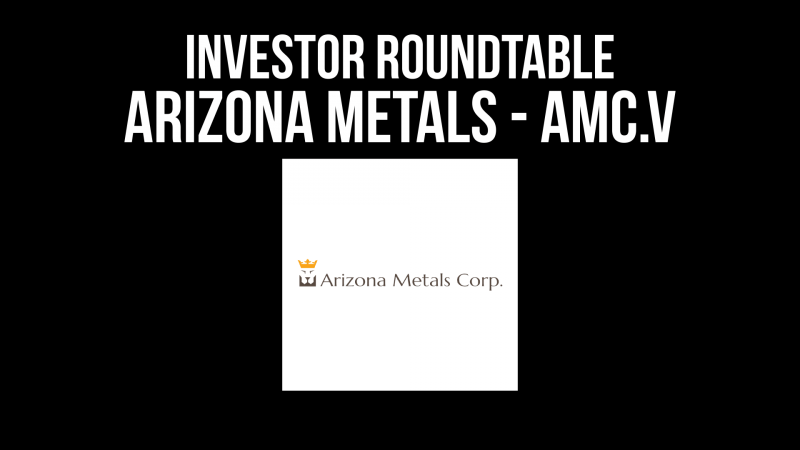 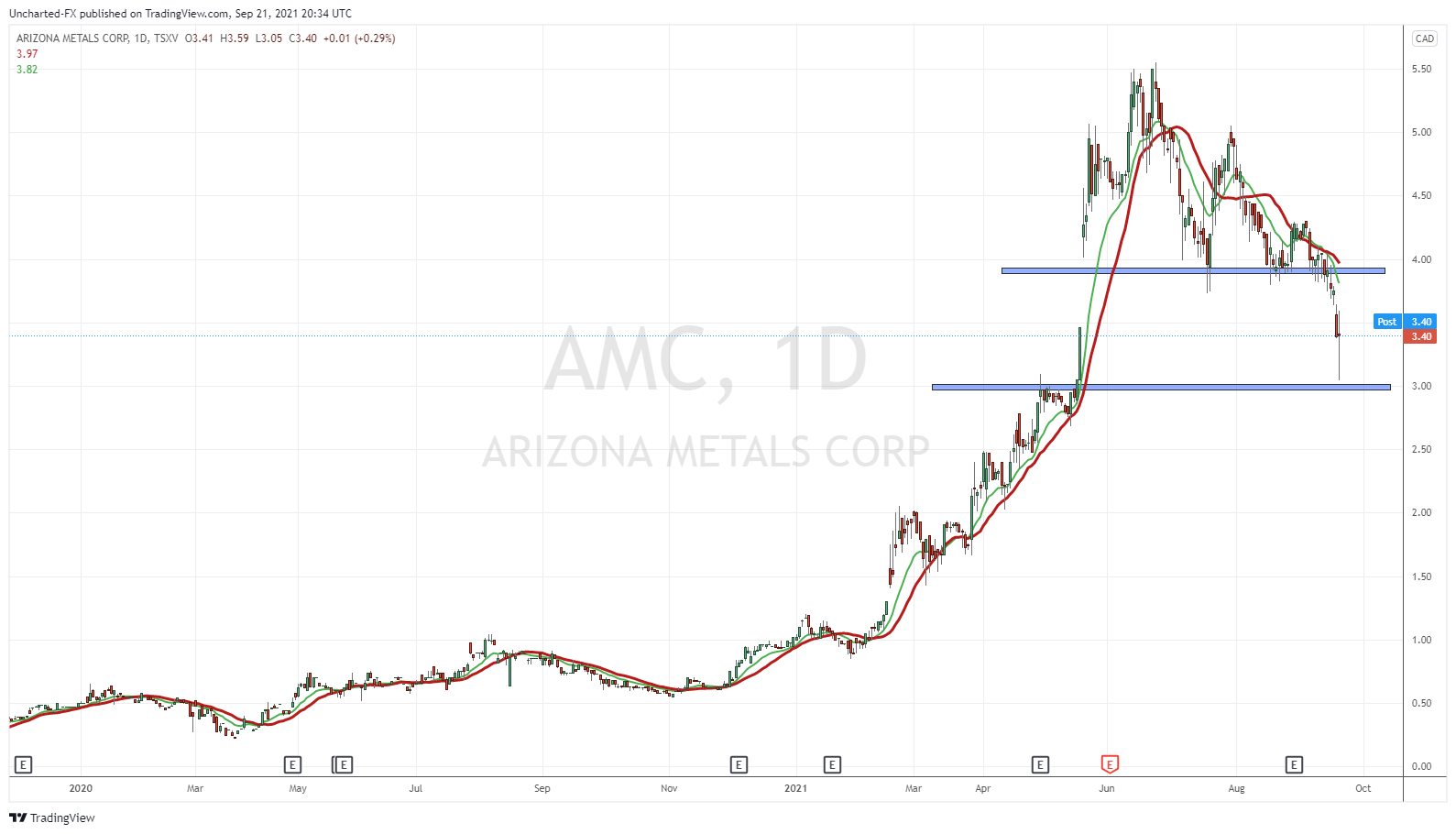