Since its debut on the TSX Venture Exchange back in September of 2019, Prime Mining (PRYM.V) has created significant shareholder value.

The stock has never traded higher…

I had the pleasure of catching up with Andrew Bowering, Prime’s Executive Vice President, this past weekend.

Andrew’s resume, as laid out in Prime’s Company Page…

Founded/funded Millennial Lithium Corp and built teams to pursue precious, base and industrial metals from exploration to production.

The following represents a good slice of that January 30th interview:

Greg Nolan (Greg from here on): Hello Andrew. I appreciate you taking time out of your Saturday for this.

Andrew Bowering (Andrew from hereon): Not a problem Greg, good to talk to you again.

Greg: I first featured Prime Mining here back in mid-October 2020 when it was trading in the $1.75 range. Since then the stock has performed nicely, demonstrating some of the best price trajectory of all the juniors I follow. That’s something considering how challenging the sector has been over the past five months.

Los Reyes is your flagship. Can you tell us how you went about acquiring it?

Andrew: Los Reyes was something I took a look at years back when I was a shareholder of Minera Alamos. They were busy with other assets. I knew the asset, I thought it was unrecognized, under-appreciated, and extremely undervalued. A combination of strained exploration budgets and a brutal bear market in mining stocks presented an opportunity—it was an opportunity I took.

Greg: That was a heads-up move. You put yourself in a position to deal directly with the vendor of the project, Vista Gold. There’s always a story behind these distressed sales and there’s a good one here. Another heads-up move was clawing back two separate 2% net smelter royalties and a 49% back-in right when you closed the acquisition with Vista last summer.

Greg: Los Reyes is located in the historic mining region of Sinaloa, Mexico. Is Sinoloa a mining-friendly jurisdiction today?

Andrew: 100%. You got Juniors, Mids, and Majors all throughout the region. You got Americas Gold and Silver, Agnico Eagle, First Majestic, McEwan Mining, and Chesapeake, just to name a few. Mining dominates that area of the Sierra Madre.

Greg: In running my due diligence, I learned that high-grade gold and silver were first discovered at Los Reyes by the Spanish in the late 1700s, sparking over a century and a half of mining. What activity has taken place over the last hundred years or so?

Andrew: In the early 1900s, an underground mine inside our land package produced something in the neighborhood of 500,000 ounces of gold and 40,000,000 ounces of silver. The mine produced up until the 1930s. Except for some limited (local) open-pitting and vat leaching on one of the outcropping structures in the 1980s, the property hasn’t seen any real production since the 1930s. In 1992, a company called Northern Crown sunk 380 drill holes into the property targeting the shallow lower-grade mineralization around the underground workings. In 1998 they took the project all the way to the PFS stage as an open-pit heap-leach mine, but in 1999 gold sunk to a low of $252.00 per ounce—Northern Crown went bankrupt soon after.

Roughly ten months back you dropped a one million ounce-plus resource estimate, mostly measured and indicated, at a grade of 1.31 g/t. And these are oxide ounces. How does Los Reyes compare to other oxide deposits around the globe?

Andrew: This is one of the richest oxide deposits globally. It’s in the top five.

Greg: And for our readers who are not familiar with the significance of oxide deposits, can you shed some light on why they are so desirable?

Andrew: Oxide deposits are easier to mine. The capital costs are way lower to get the deposit into production. We expect the AISC (all-in sustaining costs) here will be among the lowest on the planet.

Greg: These are highly desirable ounces, especially for a Producer looking to bulk-up their project pipelines?

Andrew: Yes Sir. And that’s the big thing… oxide deposits typically sell for somewhere in the neighborhood $250.00 per ounce these days.

Greg: What is the geological setting at Los Reyes?

Andrew: Los Reyes is a low sulphidation epithermal system. It’s 80 to 85% gold and 15 to 20% silver. These are typical quartz veins—they can be brecciated and non-brecciated and vary in width from 8 meters to 60 meters. The average width is approx 25 meters. Our guess is it’s a classic horsetail system like you find in Nevada, at Hollister—or it may be similar to Palmarejo in Mexico.

You have thick north-south trending feeders that hit east-west cross-cutting structures, and where they collide, you get blow-outs in mineralization, and they often blow-out wide, collecting very high-grade. The elevation of the property increases to the east as you go farther up into the foothills of the Sierra Madre’s. The structural setting on our property is such that the western side has been weathered and exposed—the eastern side is unexposed under the cover of new volcanics. The western side will be open-pit. The eastern side will be more underground as we work our way in that direction.

In our presentations, we state that less than 40% of Los Reyes has been systematically explored. But we’re now beginning to think it’s more like 25%.

Greg: Can you put that in terms of distance, in kilometers?

Andrew: We now know of 20 kilometers of known strike length, of mineralized structures, of which only seven kilometers have been drilled. In addition, I tell can you that nothing has been drilled below 200 meters depth.

Greg: You have a tight cluster of deposits that make up your current resource base at Los Reyes, and you have exploration targets in the immediate vicinity of this ounce-count. It’s a big property. Can you shed some light on the exploration potential from a regional point of view?

Andrew: When we picked up all of the datasets of all of the previous company work, it was very clear that no one had done any property-wide prospecting, sampling, or mapping. There were no good geology or structure maps. So we immediately set out to do that. We engaged a crew of twenty, broke the property up into zones, and they have been working the ground since September of last year, nonstop. I addition, we have a team re-logging core from 89 historical drill holes – they’re just over halfway through that now.

We have been re-investigating EVERYTHING.

Greg: So this crew you have on the ground is doing mostly surface sampling?

Andrew: Yes, mostly rock sampling. Much of our fieldwork now involves identifying new structures, where they are located, and what they suggest. Kerry Sparkes, our VP of Exploration, has a good handle on how the mineralized zones tie together. There are a number of structures on the property that need to be evaluated.

Greg: You’re currently in the midst of a phase-1 drilling program. Can you give us an update—where are the drills currently turning?

Andrew: Three drills, one on Zapote South, one on Noche Buena, and one on Guadalupe East. There’s talk about adding a fourth drill.

Greg: I’ll insert a map right here to help our readers get oriented… 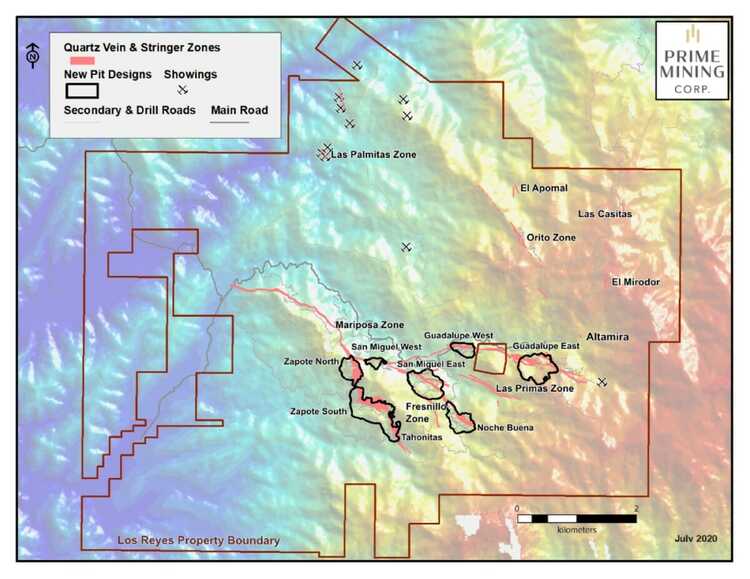 Andrew: … and there are no holes being duplicated from any of the historical drilling—no twinned holes. Every drill hole in this program adds new information, new value.

Greg: One of the zones you’re currently drilling, Guadalupe East, has some significant historical development, correct?

Andrew: Yes, there are 11 levels that run roughly 1.5 kilometers horizontally at Guadalupe East. That mining was done a long time ago—they would have stripped out ounce-plus gold from very narrow corridors, rat-holing as they went. That zone holds a lot of promise—these early miners were only interested in the highest grade ore and likely left a lot of sub-one-ounce material behind.

Greg: Have you begun testing any of these targets at depth?

Greg: These three zones (Zapote South, Noche Buena, and Guadalupe East), is this where the bulk of the phase-1 campaign will be focused?

Andrew: Yes, we’ve completed approx seven holes to date and these three zones will see an additional 50 to 60 holes to complete phase-1.

This is a structurally controlled gold and silver system. Once we figure out the keys to it, the ounces will go up, and so will the grade. This drill program is being run methodically, carefully, and with as much sophistication as we can apply.

Lengthy turnaround times for assays are a real problem in Canada right now. Are the labs in Mexico backed up?

Andrew: They are, but keep in mind that we have put 6,800 samples through the lab in Durango since October 2019… continuously. Every week we send out rock. It’s a three to four-week turnaround on everything.

Greg: And on that note, when can we reasonably expect the first batch of drill hole assays from this phase-1 program.

Andrew: I don’t like raising expectations. I’m more concerned about what the first 20 or 30 holes will tell us about our current model. If the first 30 holes over these three target areas work to confirm our model, the confidence level is going to go way up, and that’s when you’ll see changes—you’ll see more rigs added to the program and an escalation in activity. The assays will be released in batches, where it’s material, and I can suggest the end of February, early March for the first batch.

So looking out into the future, can you see yourselves changing gears and putting a project like Los Reyes into production, or would you entertain the idea of bringing in a deep-pocketed partner—a Producer—to do most of the heavy lifting?

Andrew: Absolutely. We have a team already in place that could put it into production—Dan Kunz and several people on our team have built mines in the past. But this is one of those assets that have a rare combination of grade, size, and jurisdiction—an asset that could easily get sold. It could attract a takeover bid.

Greg: Thanks for this Andrew.

While discussing the regional exploration upside at Los Reyes, I was left with the impression that Prime will barely scratch the surface with these first two phases of drilling.

And I suspect Pierre Lassonde feels the same.

Here, Pierre Lassonde announced recently having purchased 2,000,000 common shares of Prime Mining through the facilities of the TSX Venture Exchange.

For those who have been around this sector for a while, Pierre Lassonde requires no introduction. For those new to the precious metals sector, Mr. Lassonde is to the gold arena what Muhamad Ali was to the boxing ring.