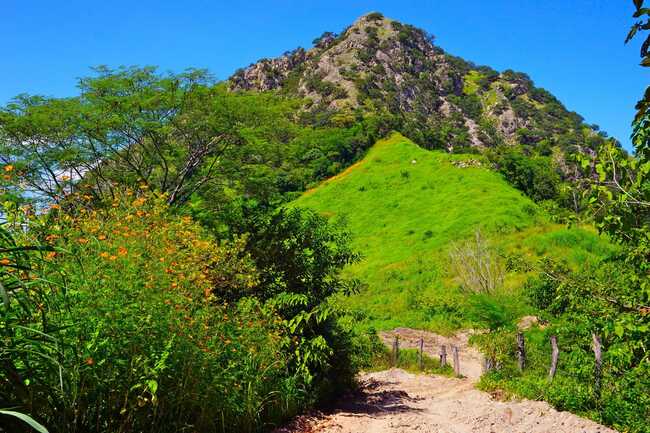 Before we examine the market-moving headline values from this 15,000-meter program, a quick review…

“Decades of extensive fieldwork and technical studies have positioned Los Reyes to be an advanced, cost-effective opportunity poised for rapid advancement.”

After adding 7,500 hectares to its land position a little over a week back, the Company now controls 13,800 highly prospective hectares in this mining-friendly region.

Slide 10 from the Company’s pitch-deck

With a production run of over 150 years, sparked by a high-grade discovery in the late 1700s, the area has evolved into a prolific gold-silver producing district. Los Reyes, and the newly acquired El Rey block, is proximal to a surfeit of significant orebodies operated by the likes of Americas Gold and Silver (USA.T), Minera Alamos (MAI.V), First Majestic (FR.T), McEwen Mining (MUX.T), and Chesapeake (CKG.V).

With seven open-pit deposits lined up in a tight cluster, Los Reyes boasts a current resource of 833,082 equivalent (AuEq) ounces in the Measured and Indicated category and 261,132 AuEq ounces in the Inferred category. 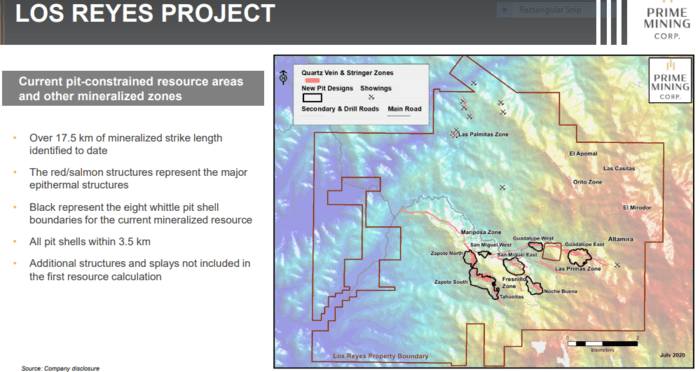 Slide 9 from the Company’s pitch-deck

This ounce-count represents one of the highest-grade (pure) oxide gold and silver resources on the planet. And notably, it’s open along strike and at depth (historic drilling was limited to a depth of 200 meters below surface).

The Company enjoys tremendous support from the local community. Right from the get, members of the local Ejido (Ejido Tasajera) voted unanimously in favor of Los Reyes’s development. 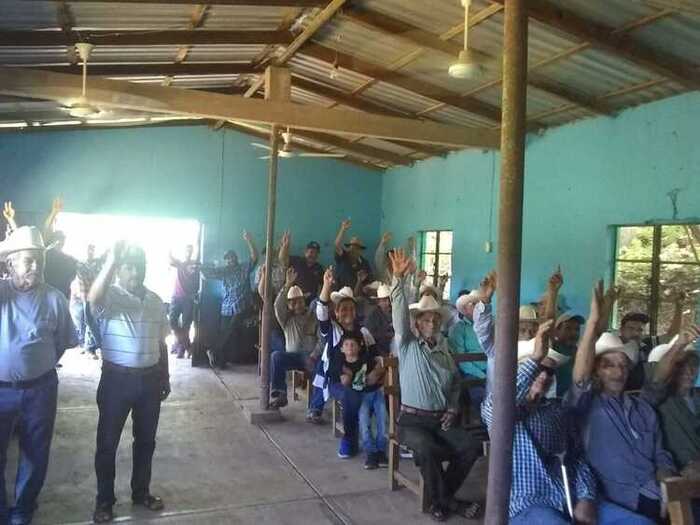 To further set the stage for a seamless path to development, the Company secured a 30-year surface access rights agreement ensuring continued exploration, development, and the timely receipt of mining and construction permits.

The project has direct access to roads, line power, abundant H2O, and a local labor force immersed in the mining culture.

As per the bolded quote further up the page, over $20 million in exploration, engineering, and prefeasibility studies have been spent on the project over the past 25 years by previous operators—their development plans thwarted by waaay low precious metals prices.

Andrew Bowering from a very recent Q & A:

“Los Reyes is a low sulphidation epithermal system. It’s 80 to 85% gold and 15 to 20% silver. These are typical quartz veins—they can be brecciated and non-brecciated and vary in width from 8 meters to 60 meters. The average width is approx 25 meters. Our guess is it’s a classic horsetail system like you find in Nevada, at Hollister—or it may be similar to Palmarejo in Mexico.

You have thick north-south trending feeders that hit east-west cross-cutting structures, and where they collide, you get blow-outs in mineralization, and they often blow-out wide, collecting very high-grade. The elevation of the property increases to the east as you go farther up into the foothills of the Sierra Madre’s. The structural setting on our property is such that the western side has been weathered and exposed—the eastern side is unexposed under the cover of new volcanics. The western side will be open-pit. The eastern side will be more underground as we work our way in that direction.

In our presentations, we state that less than 40% of Los Reyes has been systematically explored. But we’re now beginning to think it’s more like 25%.”

As highlighted in a joint Equity Guru-Highballer piece in early February of this year, mining legend Pierre Lassonde disclosed a direct and indirect interest of roughly 11.85% in Prime common.

Clearly, Lassonde appreciates the oxide nature of this resource base, but I suspect he’s looking far beyond the current ounce count… he likely has his sights set on the resource expansion and discovery potential across Los Reyes’ 13.8k hectares. 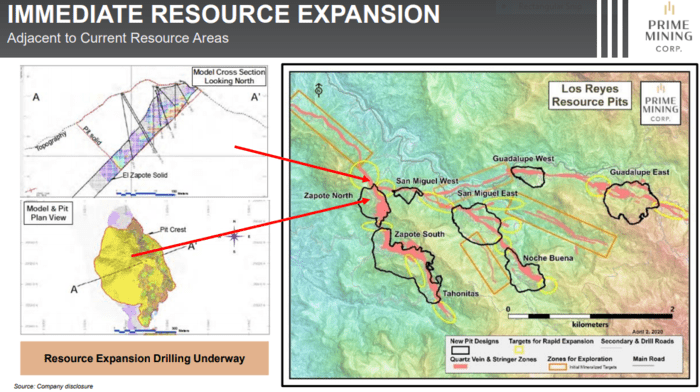 Resource expansion upside (based on open extensions of the known deposits), multiple untested high priority exploration targets, and the fact that only 40% of the known structures have been systematically explored, amplify the potential here. 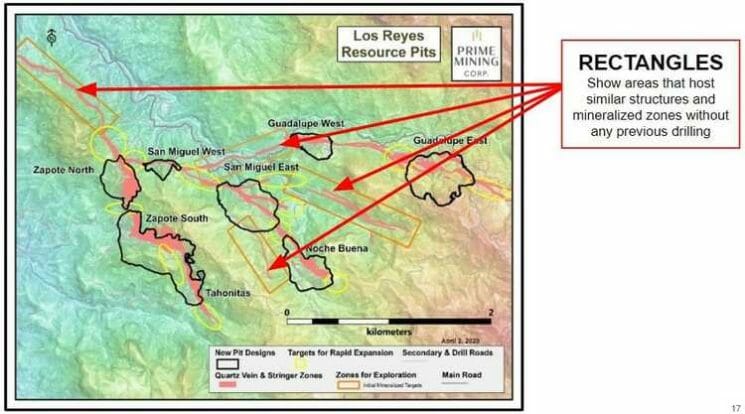 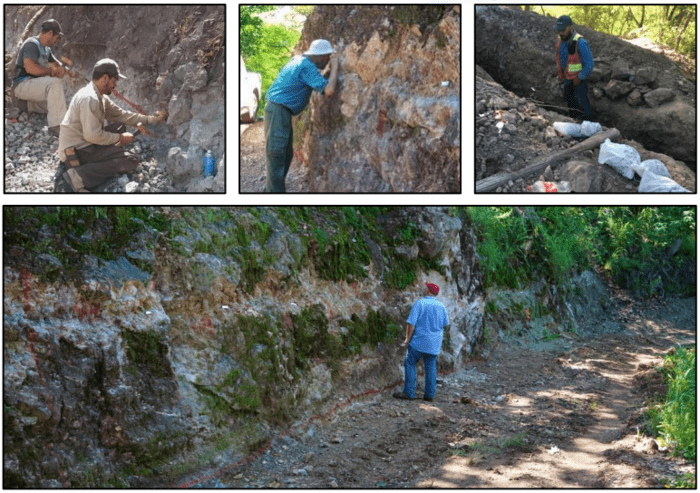 In late November, the Company kicked off an ambitious 15,000-meter Phase 1 diamond drilling program with the following objectives:

1) Upgrade 7.1 million tonnes of the current Inferred resource to the Measured and Indicated category;

2) Add to the current ounce count by drilling along strike and down dip in areas adjacent to the existing (seven) open pit-constrained resource areas;

3) Define the potential to add new gold and silver ounces in unexplored areas where new data—mapping and sampling—confirm the target potential.

This program is expected to run until late Spring or early Summer.

An updated resource estimate should follow fast upon completion of this first phase of drilling.

Looking out further, the Company anticipates a Phase-2 (drilling) campaign to push the project further along the curve.

According to our most current intel, there are now five drill rigs turning at the project.

Here, we have our first look at initial assays emerging from what promises to be a substantial newsflow cycle.

The Company unveiled assays from the first hole of the campaign—drill hole 21GE-01 at Guadalupe East—and it didn’t disappoint. 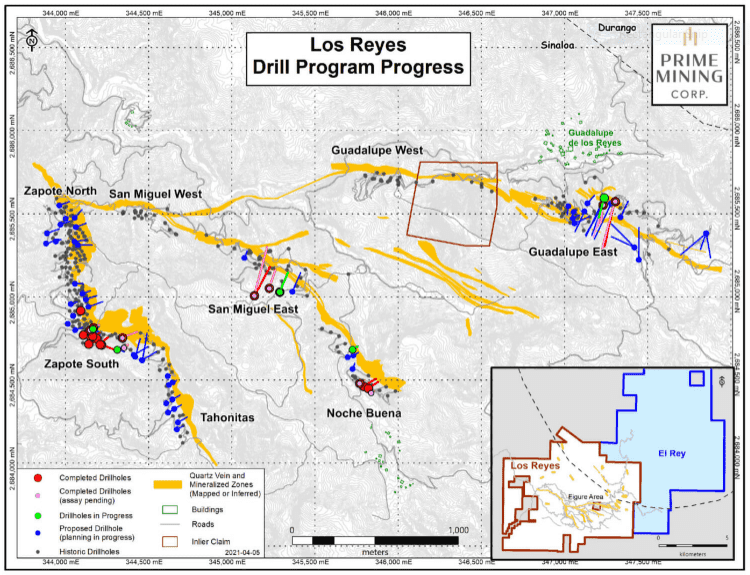 At 320 meters below surface, this 20-meter interval of bonanza grade material represents the deepest drilling ever conducted at Los Reyes—roughly 40 meters below any historic underground development, and 150 meters below all drilling by previous operators. 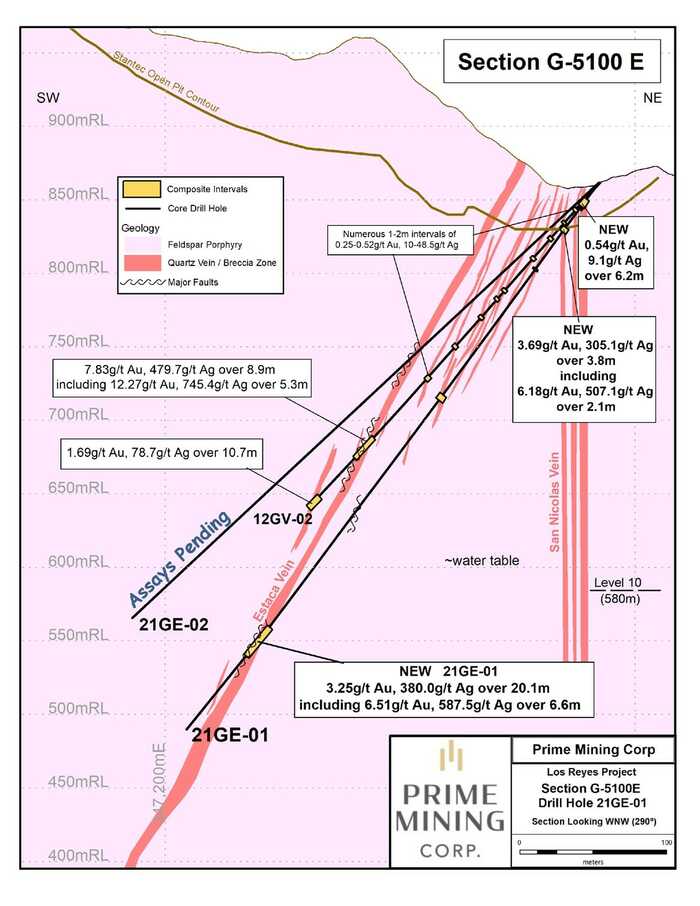 New surface mapping and sampling at Mina 20/21 tagged a discovery in an area that saw no prior (historic) mining. Chip sampling of adularia-bearing banded quartz veins, and quartz breccias, returned several mineralized intervals including 3 meters grading at 29.8 g/t Au and 1,132 g/t Ag.

The relative elevations of mineralization in drilling at Guadalupe, and in sampling at Mina 20/21, suggest the bonanza grade epithermal column extends over 500 meters in vertical height.

The following table shows a breakdown of these new assays PLUS some relevant historic drill hole data: 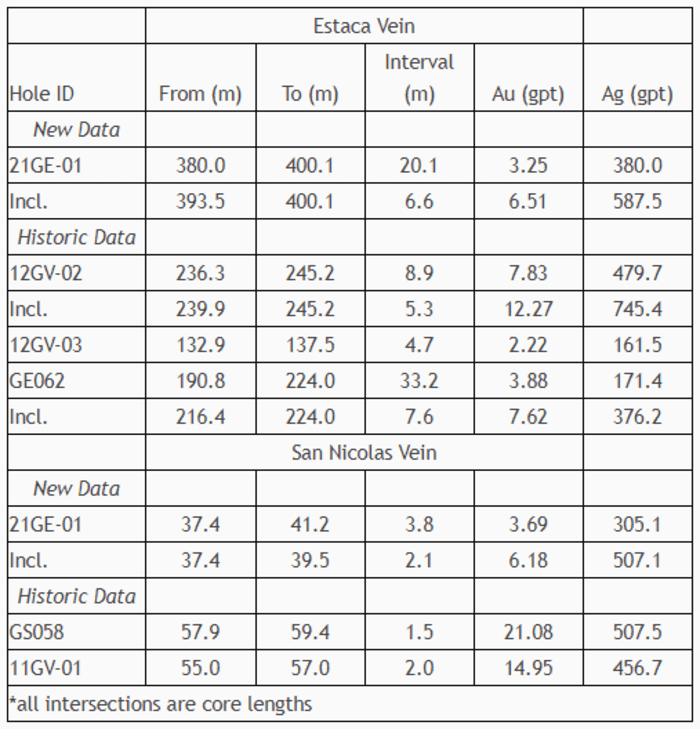 The Estaca vein is one of two principal veins mined at Guadalupe East and remains largely untested by drilling. Historic drill campaigns established limited understanding of the true orientation of the vein. Only three of more than a dozen drill holes intersected the bonanza-style mineralization previously mined at Guadalupe (table1 above). Current 3D modelling and re-interpretation of these drill intersections indicates a steep southwest dipping vein geometry explaining why previous efforts failed to intersect the structure. This interpretation also indicates that the true width of the vein intercept in 21GE-01 is approximately 30-40% of the reported drill hole intercept. Mineralization is typical of low sulphidation epithermal zones, comprising massive to drusy, colliform to crustified adularia bearing quartz and quartz breccias.

Follow up drilling is now targeting the main structure which is open at depth and along strike. The structure will also be targeted up dip and along strike in several areas where significant gaps remain between historic development. Recognition of the controlling structure and the significant height of the boiling zone containing bonanza grades provides opportunity for new, high-grade underground resource areas.

Hole 21GE-01 also intersected the San Nicolas vein near surface and 80 m from the closest historic drilling. This intercept is located just below the eastern limit of the current pit-constrained Guadalupe East deposit resource (see maps 2 and 3). Two shallow historic drill holes (located 80 m northwest) within the current Guadalupe East resource also carried similar grades and are the only two known drill holes to have intersected the San Nicolas vein (see Table 1 above). Further drilling in this area below the current pit has the potential to increase the open pit resource of the Guadalupe East deposit.

These adits are believed to have been mined in the early 1900s and cannot be found on any “modern” exploration maps (map 3 below). 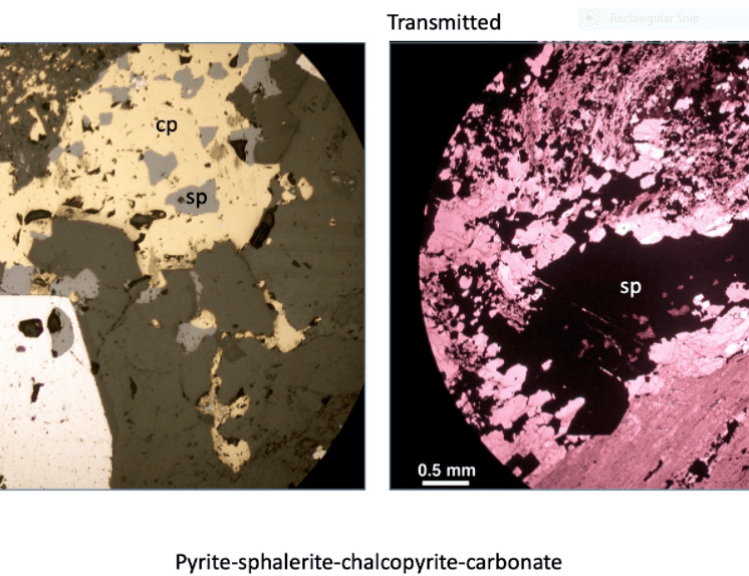 “Our first Guadalupe East drill hole opens up impressive bonanza-grade gold-silver potential at Los Reyes and highlights the expanding potential at depth and to the east at Guadalupe. Recognition of the San Nicolas vein at shallow depths and below the current pit boundary offers significant pit expansion opportunities, while the newly sampled bonanza grade mineralized structures in an area known as Mina 20/21 may lead Prime to discover more mineral deposit areas”.

Back in early February, I had the pleasure of chatting with Prime’s Exec VP Andrew Bowering. The insights I picked up during that short Q & A led to a deeper understanding of what may ultimately lie in Los Reyers’ subsurface layers:

This March 18th press release likely represents the first of many.

Expect robust assay-related newsflow over the balance of 2021 (a Phase-2 campaign should follow fast once Phase-1 is done).

Full disclosure: Prime Mining is not an Equity Guru marketing client. We own the stock so color me biased.