On November 23, 2020 Sixth Wave (SIXW.C) announced that it just signed an agreement with researchers at the University of Alberta to develop the company’s Accelerated Molecularly Imprinted Polymer (AMIPs) technology, that uses synthetic polymers to swiftly detect viruses such as the SARS-CoV-2 that causes Covid-19.

Sixth Wave will work with researchers at the University of Alberta’s Li Ka Shing Institute of Virology, under Founder Professor Lorne Tyrell.

But the Li Ka Shing Institute of Virology is no ordinary center of higher learning.

It is a super-star research institution with 32 Principal Investigators and 120 trainees and technicians.

Houghton – along with two American scientists – “made a decisive contribution to the fight against blood-borne hepatitis, a major global health problem that is responsible for 400,000 premature deaths globally each year,” stated the Nobel Assembly in Stockholm.

For SIXW shareholders, there are a couple of things to note here.

Firstly, Sixth Wave is not exclusively a “Covid-19 solution” company.

Its core technology has diversified utility across multiple industries.

For example, SIXW is in the process of a commercial roll out of its Affinity cannabinoid purification system, as well as, IXOS, a line of extraction polymers for the gold mining industry.

Secondly, the notion that a 90%-effective corona virus vaccine will make Covid-19 vanish, may be overly optimistic.

The data from vaccinations against garden-variety flu, provide a cautionary tale.

“Because flu viruses mutate constantly and the vaccine wears off over time, you can’t get vaccinated once and expect to be covered for years,” states Web MD, “The vaccine must be changed each year, in hopes of matching the ever-mutating viruses. And that’s been a challenge.”

“A vaccine is often seen as the holy grail that will end the pandemic, but a report from researchers brought together by the Royal Society, said we need to be “realistic” about what a vaccine could achieve and when,” warns BBC news.

“Vaccine hesitancy is a growing problem that had become embroiled in anti-mask, anti-lockdown ideologies,” stated one researcher. 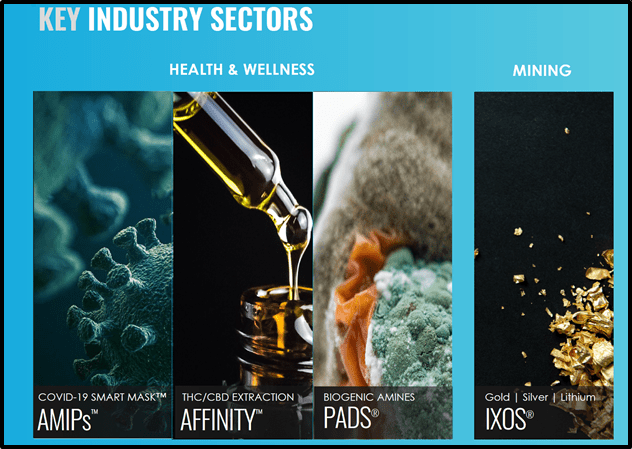 AMIPs is based on Sixth Wave’s patented and patent-pending molecularly imprinted polymer systems, which propose to capture viruses using synthetic materials rather than biological antibodies.

The University of Alberta has provided lab facilities and equipment to facilitate the specialized molecular imprinting process – specifically for versions of the SARS-CoV-2 virus.

Polymer prototypes will be produced in the lab and subjected to intensive testing to prove:

“If researchers are successful, the AMIPs technology could be an affordable, reliable and easy-to-use method to rapidly detect the presence of SARS-CoV-2 and provide a platform for expanding the detection capability to almost any virus,” states SIXW.

“The prompt diagnosis would allow even asymptomatic people to know if they have contracted the virus, dispensing with the delays, inconvenience and uncertainty of current testing practices”.

SIXW’s intention is “to incorporate the AMIPs technology into a several rapid-detection products, including rapid virus test kits, SmartMask, as well as air and water monitoring systems”. 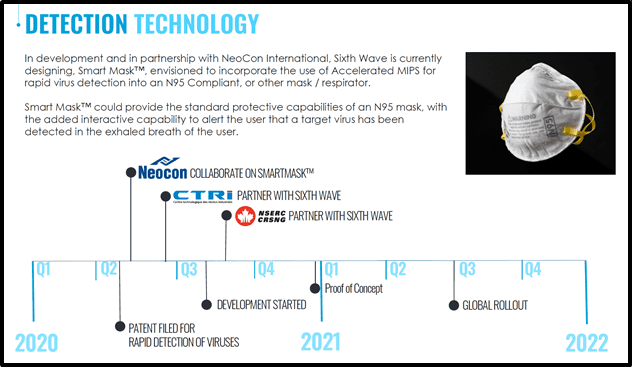 “The solutions we develop will provide the first prototype AMIPs™ articles and will be the basis for launching various productization efforts resulting in both point-of-care and self-use products,” said Dr. Gluckman.

“The ability to produce a simple, inexpensive and accurate test that can be used by anyone without specialized training will be a significant development in the fight against this and other viral disease,” said Dr. Gluckman.

The agreement with the university will run for 12 weeks, with Sixth Wave paying the University $150,800 for their services.  Any new intellectual property derived from this effort will remain the sole property of Sixth Wave.

“MIP-based analytical technologies are known for their flexibility, durability and accuracy,” confirmed Dr. Garrett Kraft, PhD, head of the Sixth Wave project, “Polymer substrates demonstrate resilience under adverse conditions and do not require climate-controlled storage as many antibody-based tests do.”

“They can therefore be readily applied to a host of materials, fabrics and other test media,” added Kraft, “These attributes, along with low cost and production scalability, have the potential to set AMIPs apart from traditional PCR [polymerase chain reaction] and immunoassay tests.”

Equity Guru’s own Chris Parry recently spoke with company CEO and founder, Jonathan Gluckman, PhD., in a two-parter interview to get a better look at the operation and what investors can expect over the next 12 months.

“Sixth Wave is honored to work with such a distinguished research team,” stated Gluckman. The Li Ka Shing Institute of Virology “provides a unique combination of skills and a breadth of knowledge in polymer synthesis and virology. This combination has the potential to streamline and reduce the time/cost of our development.”