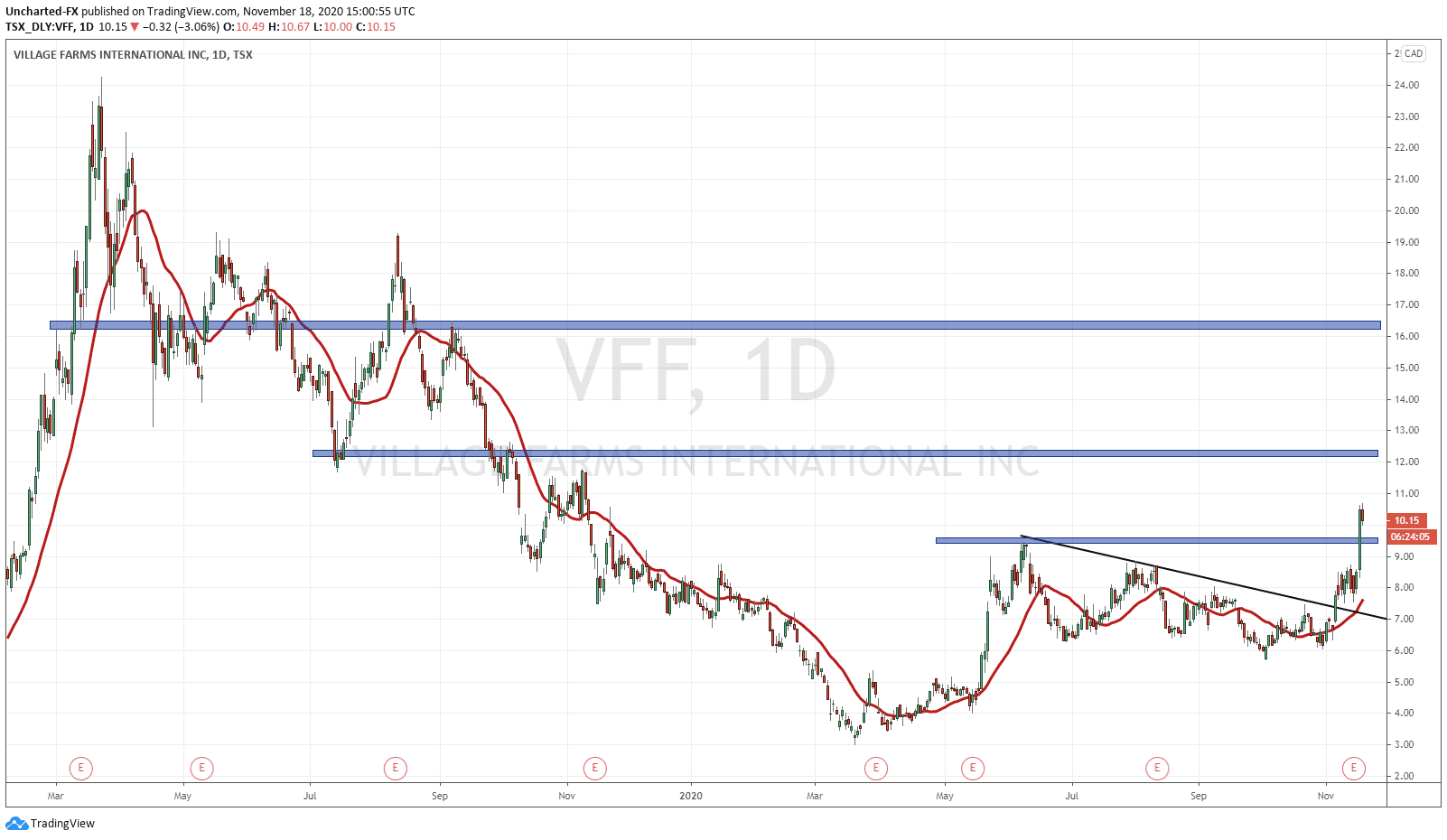 Cannabis charts are looking great with the catalyst being a Biden Presidency. Last week, I did a quick round up of some charts which caught my attention in the space. You can read that here.

From that piece, Isracann (IPOT) confirmed a breakout from its range yesterday, and is currently retesting the breakout zone. Let us hope the retest holds and is successful. Plus Products (PLUS) still remains in the range, but is looking ready for a breakout. Today’s price action is already near the top resistance band of the range.

A few other stocks mentioned in the article, but have been followed by us over on our free Discord Trading Room (link icon at the top of the page) are Cronos Group (CRON) and Aphria (APHA). Aphria has a broader inverse head and shoulders pattern, and we have been patiently awaiting the breakout. This could be confirmed by the end of today with a close above the resistance neckline. Cronos group (CRON) was a trade idea mentioned on discord and gave our followers a nice 34% gain in two days. The chart still looks great overall, and we are now watching for a longer term range and pattern break above 11.50.

Today I want to talk about another trade idea mentioned on our discord trading room and has rewarded us with a nice 20% pop. That is Village Farms (VFF.TO).

Village Farms is one of the largest and longest-operating vertically integrated greenhouse growers in North America and the only publicly traded greenhouse produce company in Canada. Village Farms produces and distributes fresh, premium-quality produce with consistency 365 days a year to national grocers in the U.S. and Canada from more than nine million square feet of Controlled Environment Agriculture (CEA) greenhouses in British Columbia and Texas, as well as from its partner greenhouses in British Columbia, Ontario and Mexico. Village Farms is now leveraging its 30 years of experience as a vertically integrated grower for the rapidly emerging global cannabis opportunity through its wholly-owned subsidiary, Pure Sunfarms, one of the single largest cannabis growing operations in the world. Village Farms also intends to pursue opportunities to become a vertically integrated leader in the U.S. hemp-derived CBD market, subject to compliance with all applicable U.S. federal and state laws, Village Farms has established a joint venture, Village Fields Hemp USA, LLC, for multi-state outdoor hemp cultivation and CBD extraction and plans to pursue controlled environment hemp production at its Texas greenhouse operations, which total 5.7 million square feet of production area, when the U.S regulatory framework for CBD becomes clearer.

I actually have a history with the stock. Village Farms was a stock I picked up under $1.00 way back in 2016. I am very bullish on agriculture and farming stocks, so I bought the stock due to their farming and vegetables. The cannabis growing operation was a nice bonus, and of course, the stock popped during the cannabis mania, hitting all time highs of $24.25.

The reason I am so bullish is due to the comments by Jim Rogers. Not many young people want to be farmers anymore, but rather doctors, lawyers, accountants etc. Also, good soil is becoming an issue. If you believe clean energy will take over around the world, it is suited for certain climates. For solar panels and wind, you need to be in extremely sunny or windy places, which tend to be where crops are grown. Some countries will win out, but others will have to sacrifice prime agricultural land…unless they do vertical integrated farming or greenhouse farming etc.

Finally, climate change will be impacting food. Farmers have been complaining that winter lingers longer on the East coast, which means seeds are placed later than before. Of course, this can also be addressed through a new approach in farming such as vertical integration or greenhouse etc.

Back to Village Farm. Recently the company has completed its 100% acquisition of Pure Sunfarms, which is a significant milestone for the company. Village Farms also released Q3 2020 earnings. Here are some data points:

For my traders and chartists, Village Farms meets the Equity Guru Trade Criteria. Readers know that we look for companies in a prolonged down trend, before showing signs of a reversal, generally in the form of a reversal pattern. The thinking is that nothing moves down forever. Assets move in waves and cycles. Village Farms has confirmed one of our patterns.

First off, there was an opportunity to enter the stock back in May of this year. You can see price began to range and broke out of that range. The bottoming occurred at a previous support level.

Price hit above $9.00 before pulling back. I have drawn a trendline to indicate the retracement. Some people would call this a triangle set up. You can see that the break above the trendline happened on November 5th, just a week before earnings were released. The market was pricing in positive earnings.

This was when we mentioned the stock on our discord trading room. The breakout was significant. After earnings, price continued to shoot up higher, and yesterday, we closed above the resistance zone of $9.50. That confirmed the broader cup and handle formation.

Currently, price is pulling back, which is normal price action. Readers know that we tend to see price retest the breakout zone before continuing the trend. Expect Village Farms to test $9.50 again, and this is where we want to see the buyers step in defending the zone now as support.

Targets to the upside? There is a flips zone (an area that has been both support and resistance) at $12.25. However, I like to target zone which have had more than 3 touches before. In this case, $14.00 and then $16.00 look better for targets. I am planning to hold my shares for the long term front running the cannabis legalization under a Democratic administration, and a pricing in of the agriculture side of things.