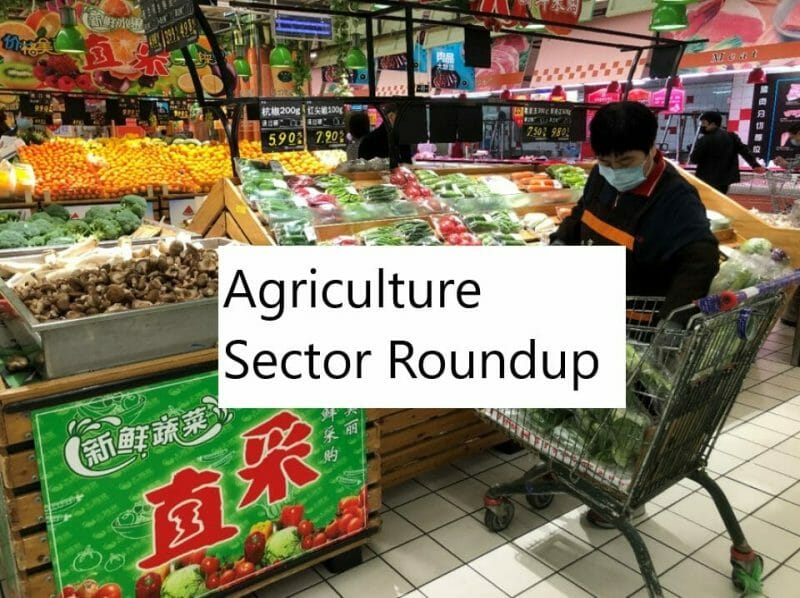 We open this sector roundup with big news from China. The Chinese government is telling people to stock up on food and necessities as temperatures fall and Covid-19 cases spread. It is setting up to be an eventful winter not just for agriculture, but for world markets and central bank policy in general. Buckle up.

Headlines from CNN and the South China Morning Post spoke about the party directive to stock up on food. Leading to western headlines such as “China accidently sparks doomsday prepper frenzy after telling residents to stockpile food”.

If you have followed my agriculture sector roundup since day one, one of our macro cases to be bullish on this sector has been a food crisis. Mind you it’s not doom and gloom, it gets solved, but we might go through a bumpy period. As world supply chains keep getting tested, and inflation picking up…we will be seeing more of these types of headlines as we end of this year, and likely begin 2022.

When the CCP tells people to do something, I pay attention. We don’t hear much out from China, and some may not even believe anything that comes out from that country. Others believe the CCP may have created a food crisis just by scaring people into stockpiling. A few go even deeper saying this is the CCP’s way of preparing the people for a possible outbreak of war with Taiwan, or another pandemic lockdown. Time will tell. I’m not someone who tells people to stockpile food, but I think here and there, it would be prudent to pick up an extra can of food or perishable food when you can. For example, buy two peanut butter jars rather than one.

As this news came out, the technical charts of some ag commodities popped. Just do a google search of ‘wheat price’ or ‘corn price’, and you will see headline after headline stating higher food prices are coming. Once again, something we have known. I just include agricultural commodities in my inflation trade thesis. All ‘hard assets’ and commodities will be moving higher. Supply and demand mechanisms cannot be attributed to the rising prices of many commodities right now. This is the inflation trade. 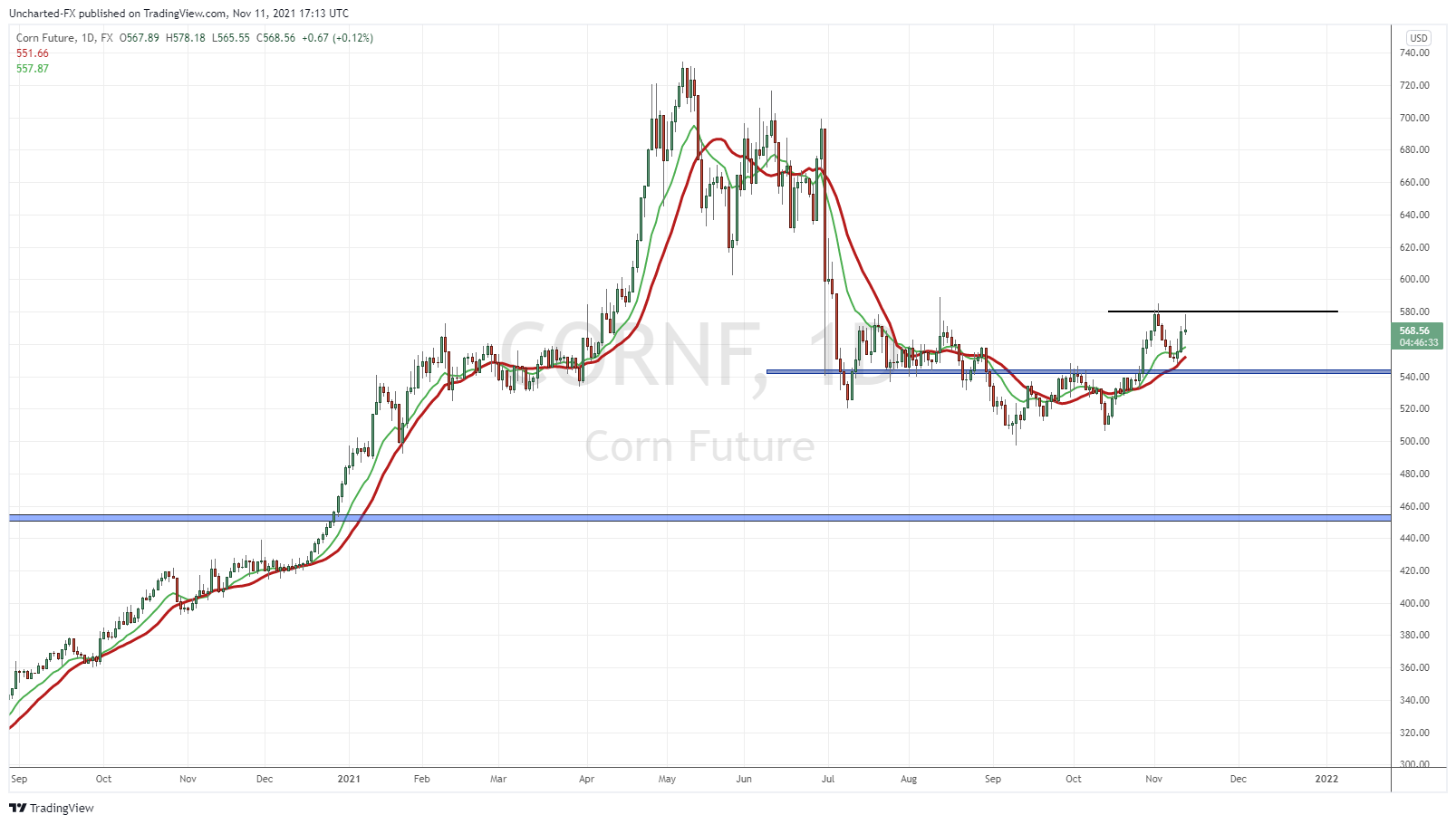 I talked about my Corn contract entry two weeks ago. Added some more on the retest of the breakout above 540 on the futures contract. Will be adding more when we confirm new recent highs on the break above 579.50. Good chart structure that meets all my criteria for being bullish. 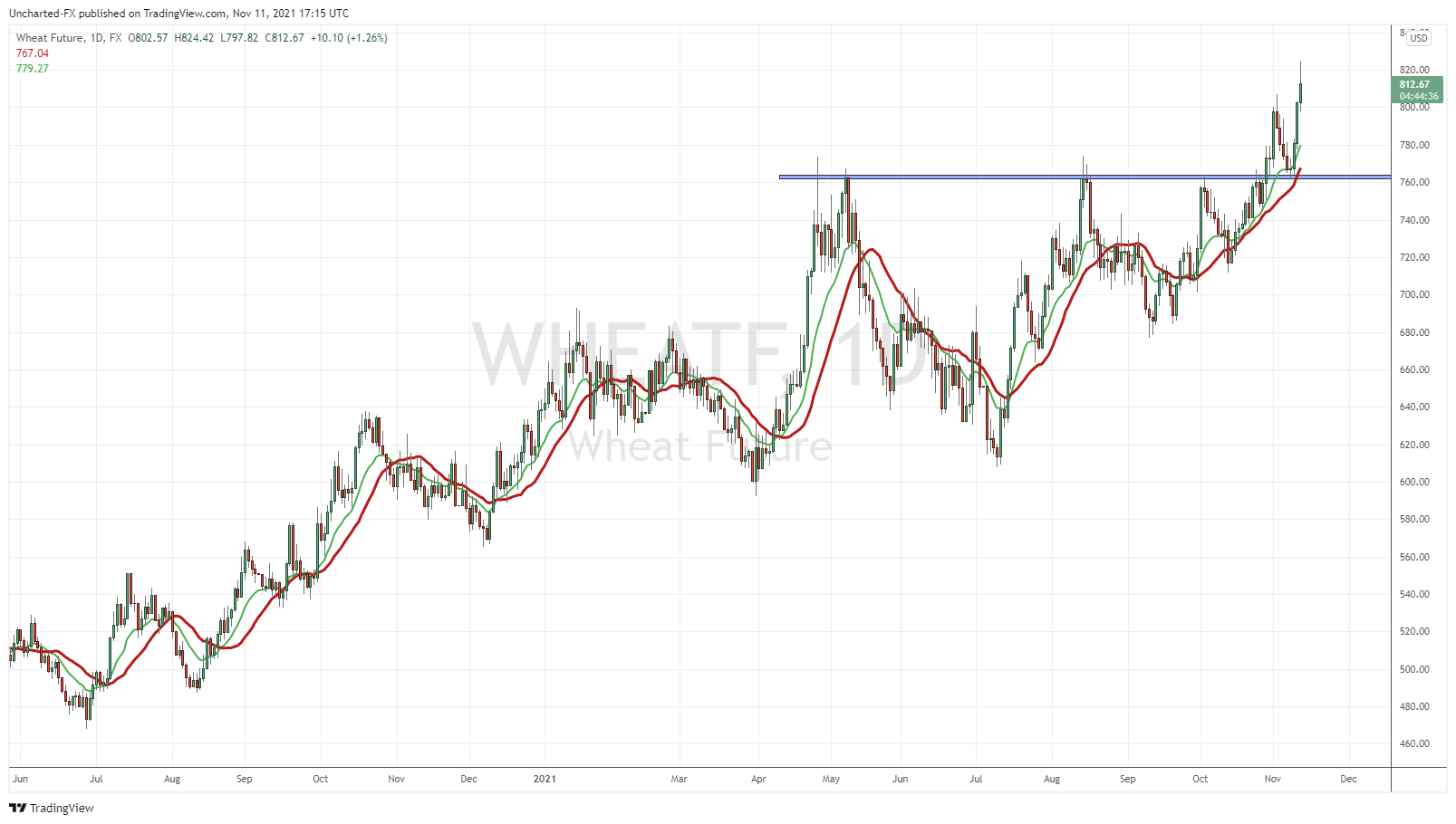 Wheat is the agricultural commodity many analysts and traders are talking about. A huge breakout just occurred with the retest confirmed this week. Wheat futures tried to climb above 760 four times this year and kept getting rejected. We finally got the big breakout on October 28th, with the retest this week. As you can see, typical breakout and retest price action. Buyers have stepped in at the retest zone. One could have added a position on that retest, or alternatively, play the breakout above these recent highs, placing your stop loss below 760. 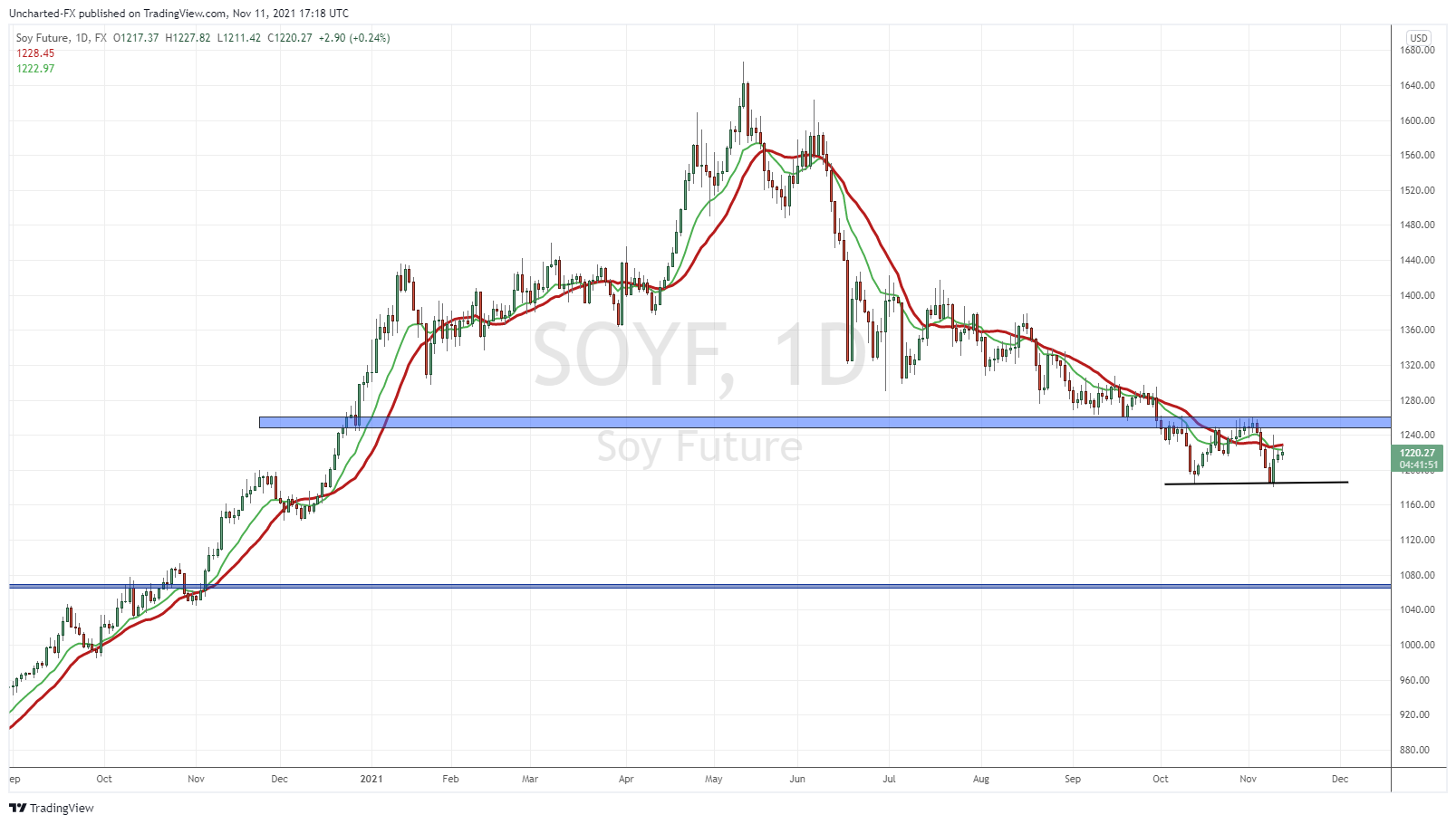 So far Soybeans have not joined the party. But we do have a nice structure setting up here. Perhaps a double bottom play. Let’s see if we can climb and break above 1255 in the coming days and weeks to trigger a new bull run in Soybeans.

If you are Canadian, be prepared to pay more for dairy. Yes, I am talking about rising milk and cheese prices. The Canadian Dairy Commission has recommended a significant increase in the price of farm gate milk starting in February of next year. The cost of milk used to make dairy products for the retail and restaurant sectors will increase by an average of 8.4%. Rising production costs, specifically the cost of feed for cows. Unfortunately, we don’t think it will just be dairy seeing a rise in prices, nor do we think the increase will be capped at 8.4%, We talked about AG Growth International closing a $100 million public offering in last week’s Sector roundup. This week, AG Growth announced the full exercise of the over-allotment option on its offering of convertible unsecured subordinated debentures, resulting in the issuance of an additional $15 million aggregate principal amount of Debentures, bringing the total offering to $115 million aggregate principal amount of Debentures.

The Debentures have an interest rate of 5.00% per annum, a maturity date of June 30, 2027, are convertible at the option of the holder into common shares of AGI at a conversion price of $45.14 per share, and are listed for trading on the Toronto Stock Exchange under the symbol “AFN.DB.I”. 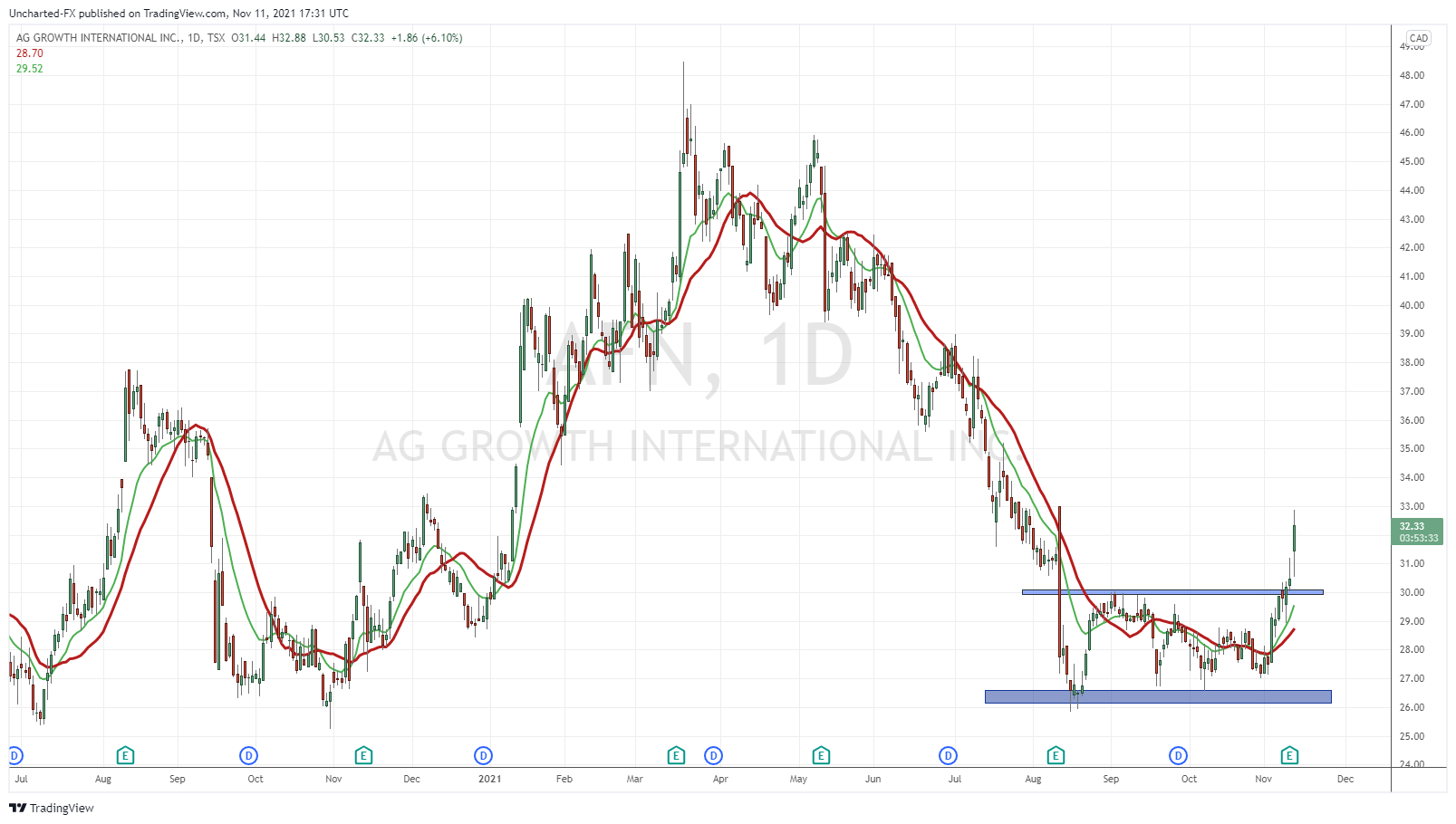 The big highlight of this company has been the chart. It meets all the criteria for our reversal swing trade. A long downtrend, finally building a base, and now the breakout. It looks really good. With the momentum and headlines coming to the agriculture sector in the future, this is one to watch! Strong breakout and we can move up to the $37-$38 zone from here. The new uptrend is just beginning! I am thinking of institutional money on this one, especially if we see more food shortage headlines…and the fact AG Growth pays a dividend.

MustGrow has been garnering a lot of attention in the ag space. They loaded up on a private placement, have some big names invested in the company, announced an exclusive agreement with a corporation in Japan, and investors have seen the share price rip higher! They are up 252.80% year to date! 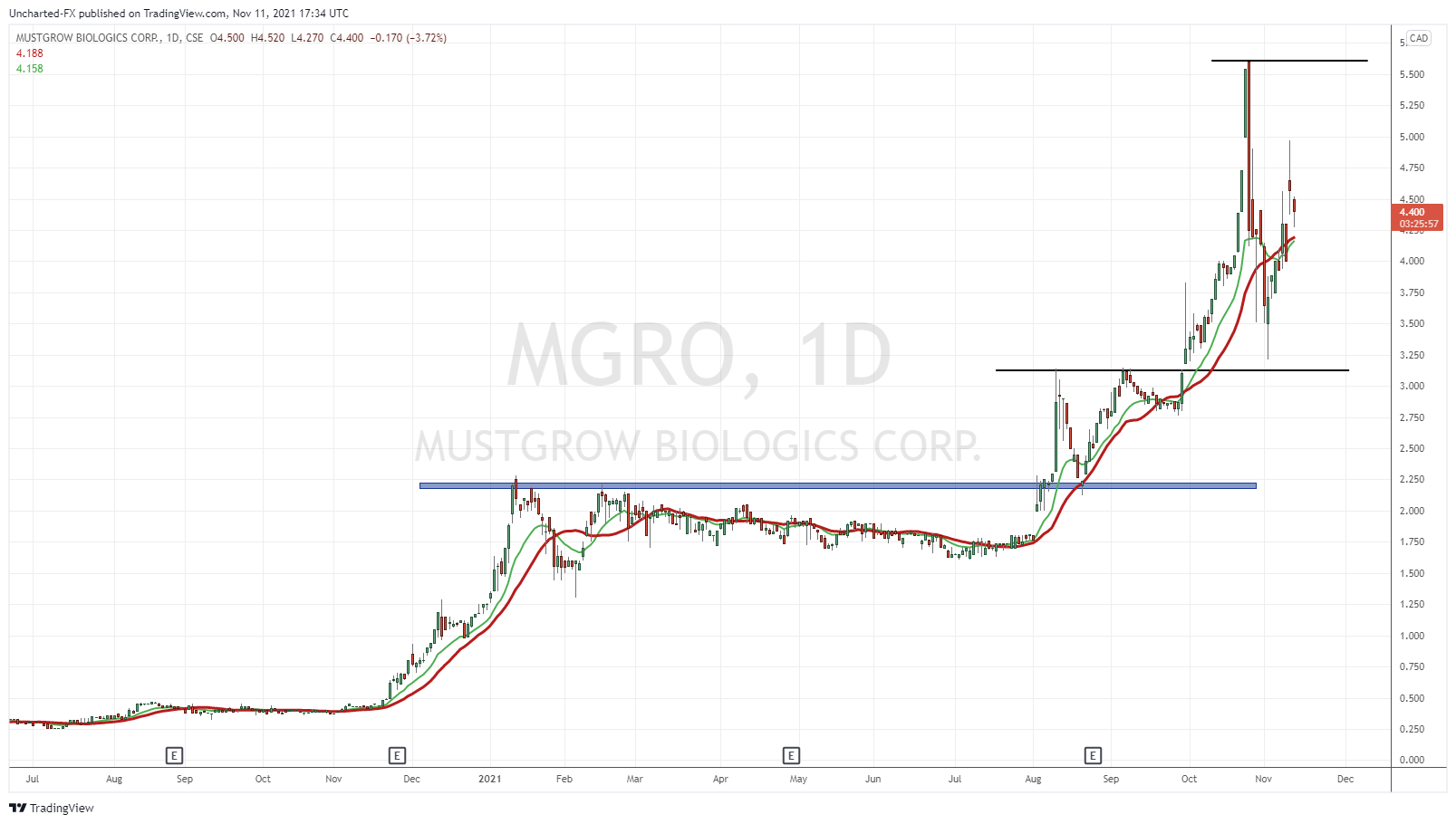 It has been quite the run on MustGrow, hitting record highs of $5.60. From there, we have sold off as profits have been taken. I am looking forward to many more catalysts from this company. This news is definitely welcoming, and we are seeing the agreement with Sumitomo play out after 3 months from the announcement. Some technical levels to watch: $5.00 looks like some near term resistance, and I would also say the major support right now is at $3.10.

Earth Alive is a soil health company and an industry leader in microbial technologies. Earth Alive’s innovative products contribute to regenerative agriculture, natural dust suppression with minimal water use and industrial cleaning that is ecological and human friendly.

Been scoping these guys out recently because I have been seeing days of significant volume come in. Now we know why. Earth Alive reported its highest year-to-date Q3 revenues ever! Here are some highlights: 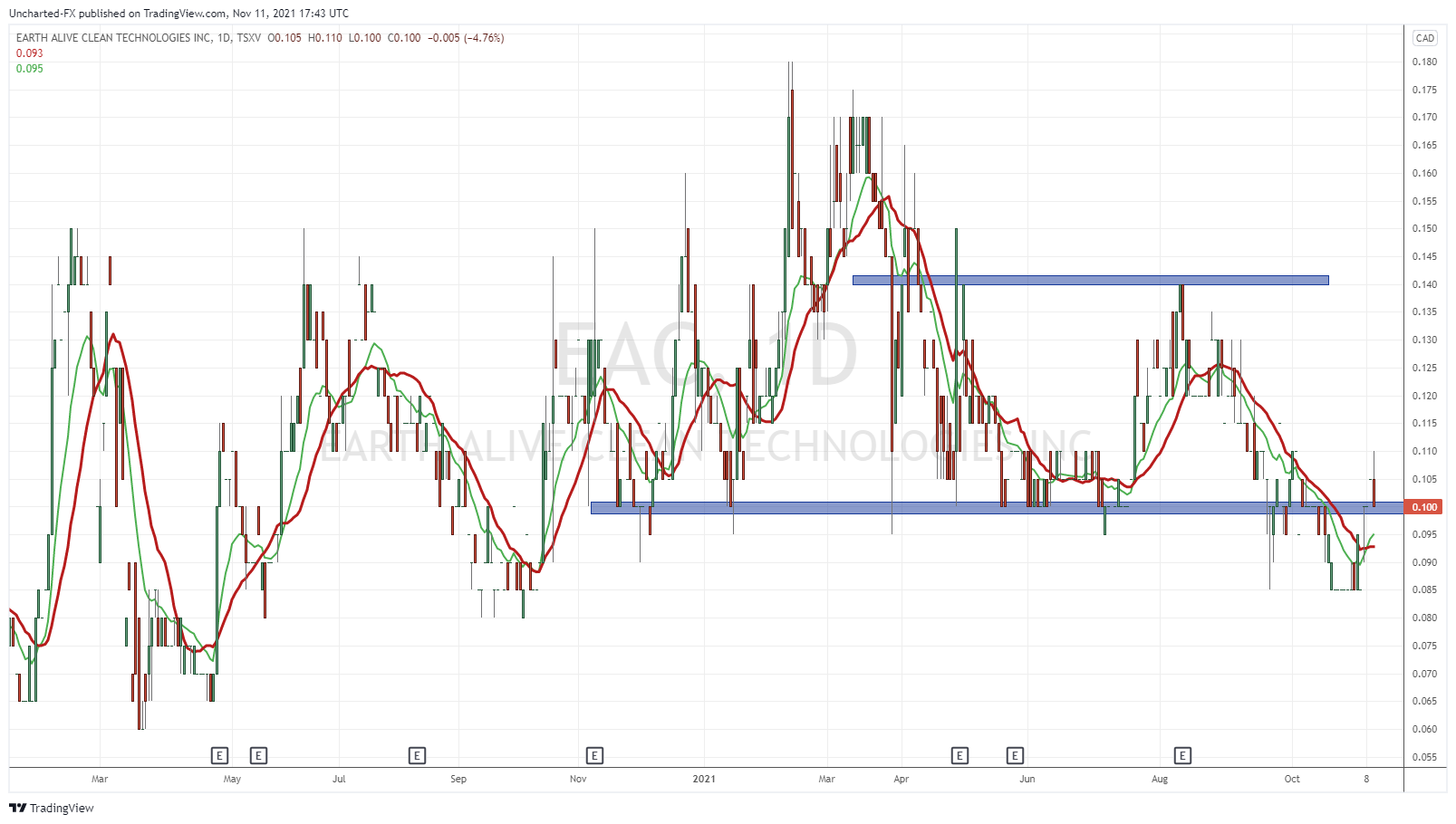 The stock has been in a range, and was above the $0.10 support. Recently, we broke down below this support. No major sell off though. With these earnings, we have climbed back to retake $0.10. We need a daily candle close to confirm this. I will be watching for some sort of basing here if we can confirm this close. I like what the company is doing, and I am a big fan of microbes being used for growing.

Just a quick update on Water Ways. A technical update. Last week, we heard about the new irrigation component orders totaling $1 million from customers in South America. We actually got another order this week, with three new orders for its Medical Cannabis Internet of Things Water and Control Systems. Two orders from existing customers exist of:

This company and team just keeps getting things done, and the good news keeps coming! 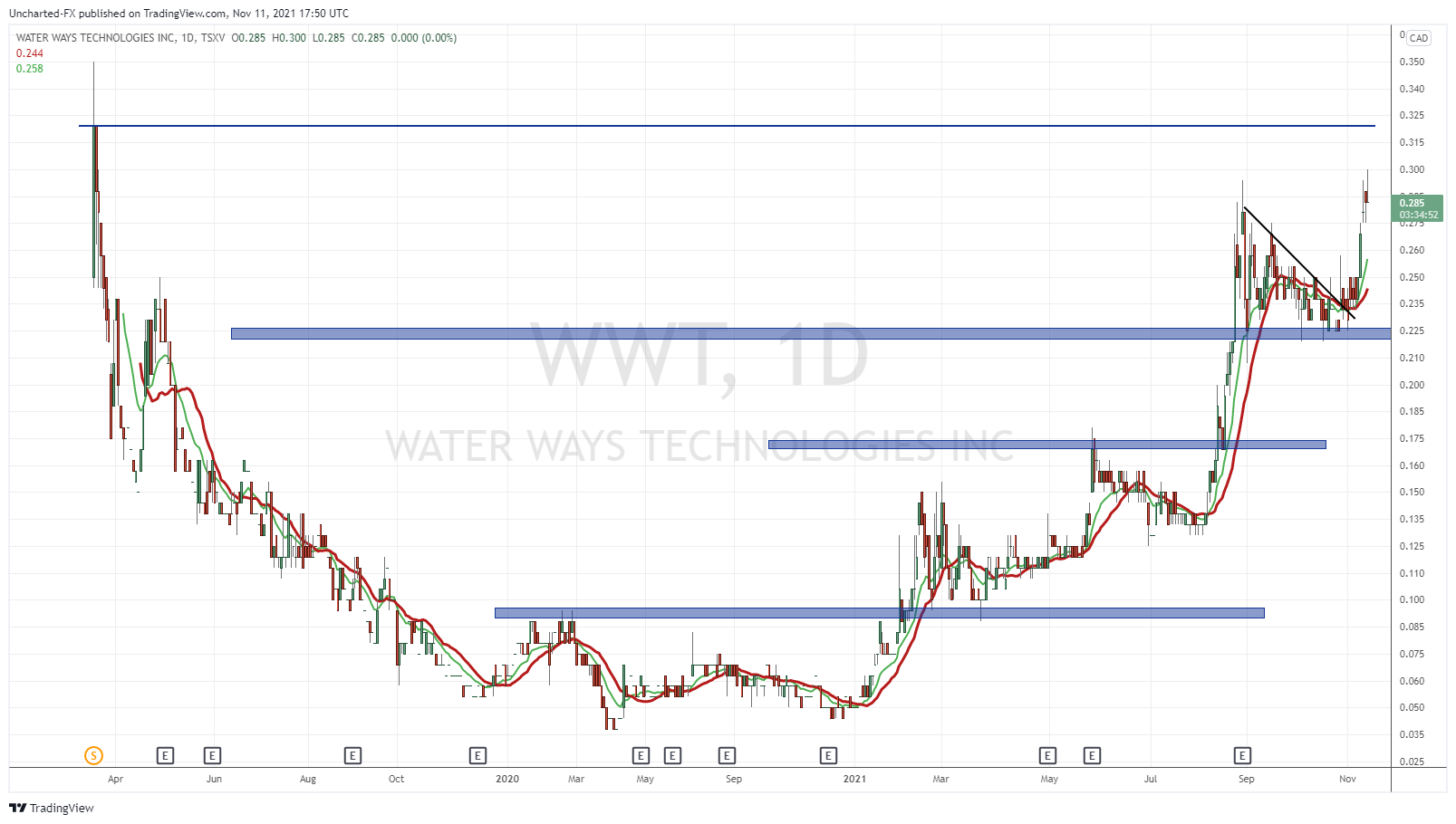 We have the trendline break, and price is set to close above recent highs. Very important as this will set up a move up to $0.32, which if we can break and close above…we are looking at all time record highs shortly afterwards.

Okay, this one will be purely technical. In recent weeks, I have been posting the beautiful technical set up on EarthRenew. Things are still the same. One of the best technical charts I am seeing. However, we just need that break and close above $0.20. We need some sort of catalyst because ideally, the break and close should be accompanied by large volume. Maybe some news is coming. Keep this on your radar. 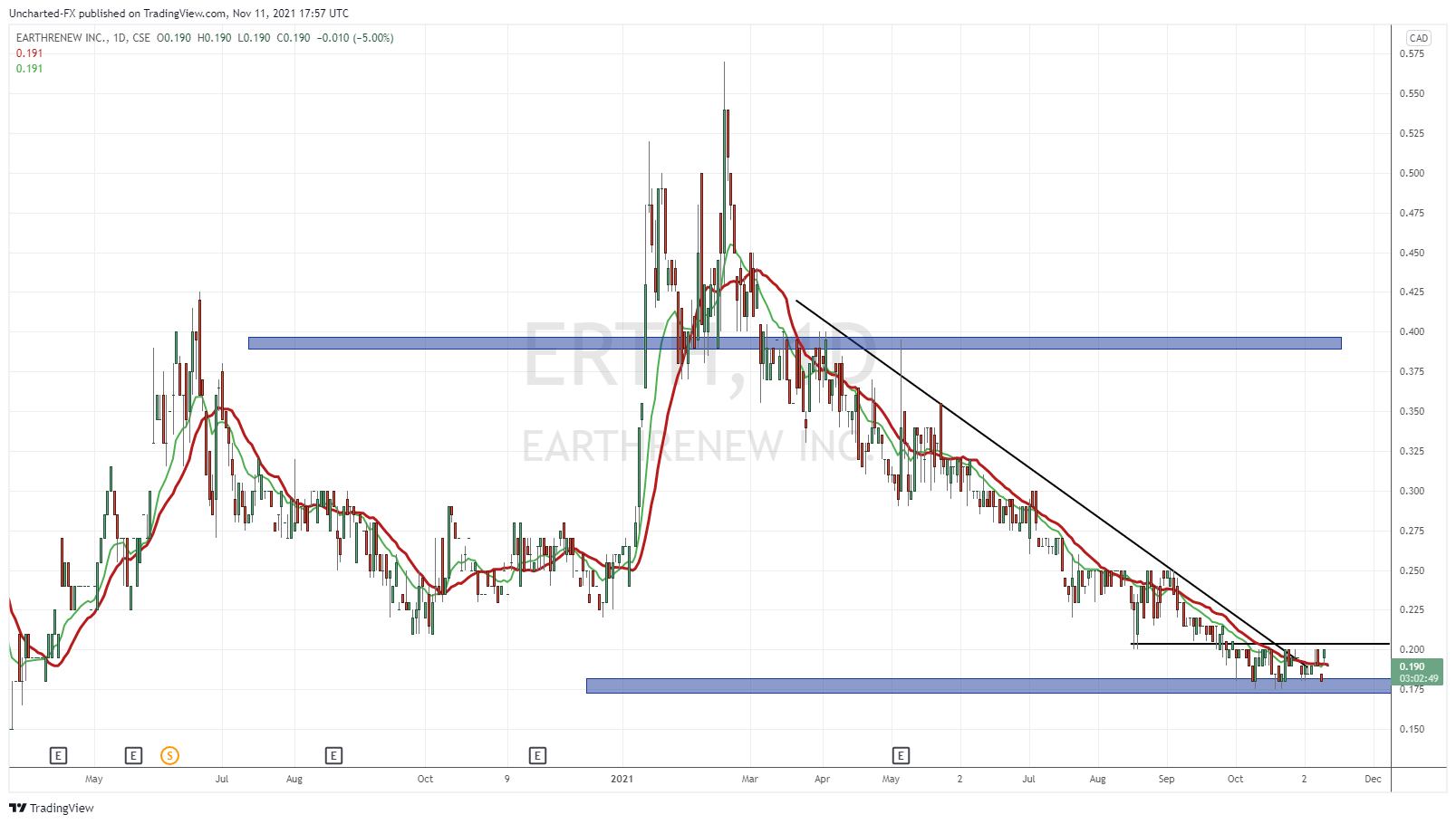 Deveron caught my attention with the announcement of contracts signed for the use of their carbon services platform. Carbon credits are going to be huge, and Marin Katusa sees it as the next big trade. Prices are already rising. If you are a member of Equity Guru’s Discord channel, then you know I have been looking at a few pure carbon and general carbon trading plays. Deveron is one of them.

This week, Deveron signed its fourth enterprise client contract totaling $105,000. The agreement is in support of the client’s carbon program that covers Ohio, Indiana, and Illinois. The contract provides the client access to Deveron’s new platform which provides a scalable and streamlined process for collecting, analyzing, and sharing in-field soil carbon data. 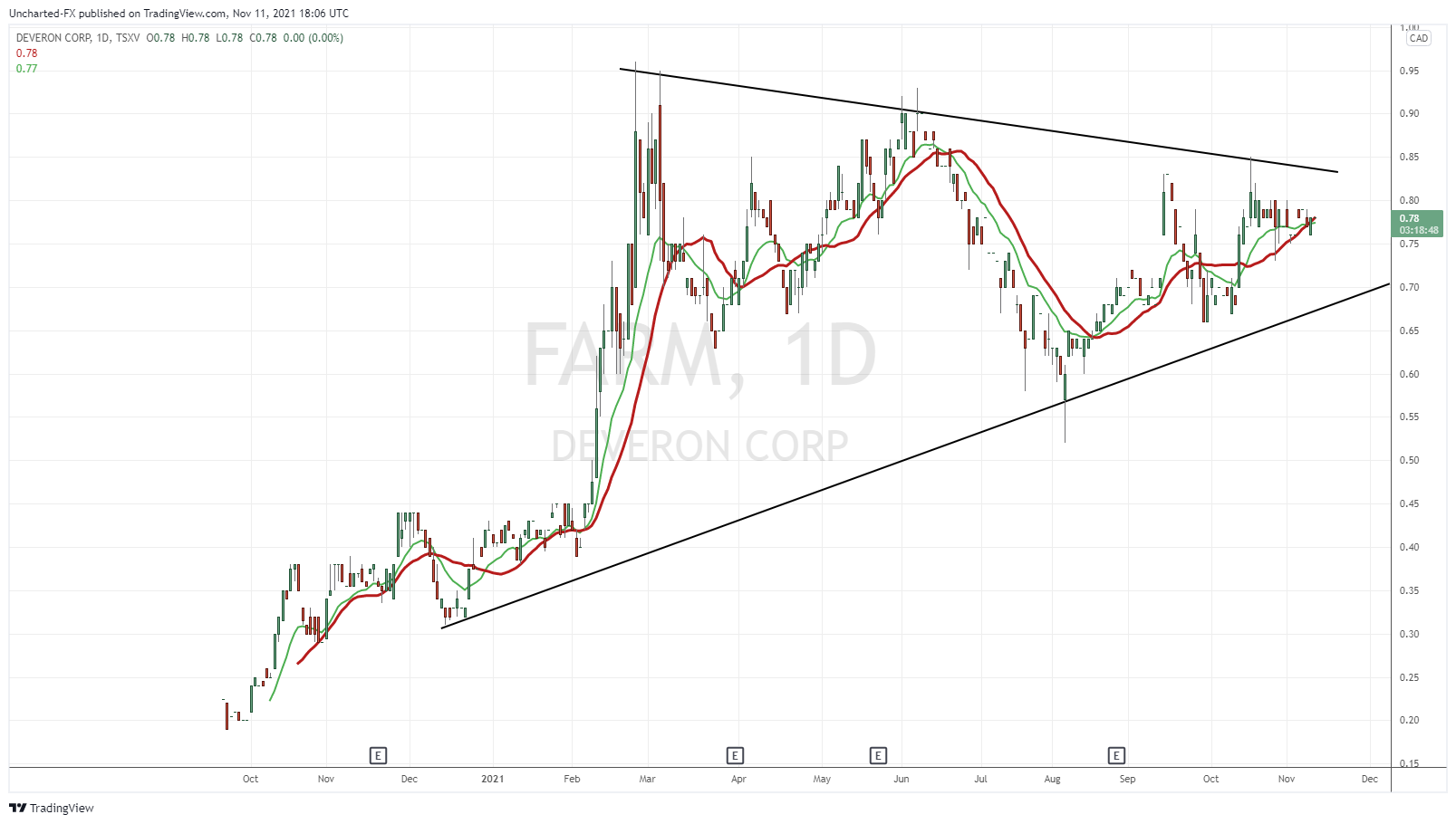 We are in a broad triangle here, but watch for that breakout. This company is doing some great things, and shareholders are loving the great news which is coming in on a weekly basis! 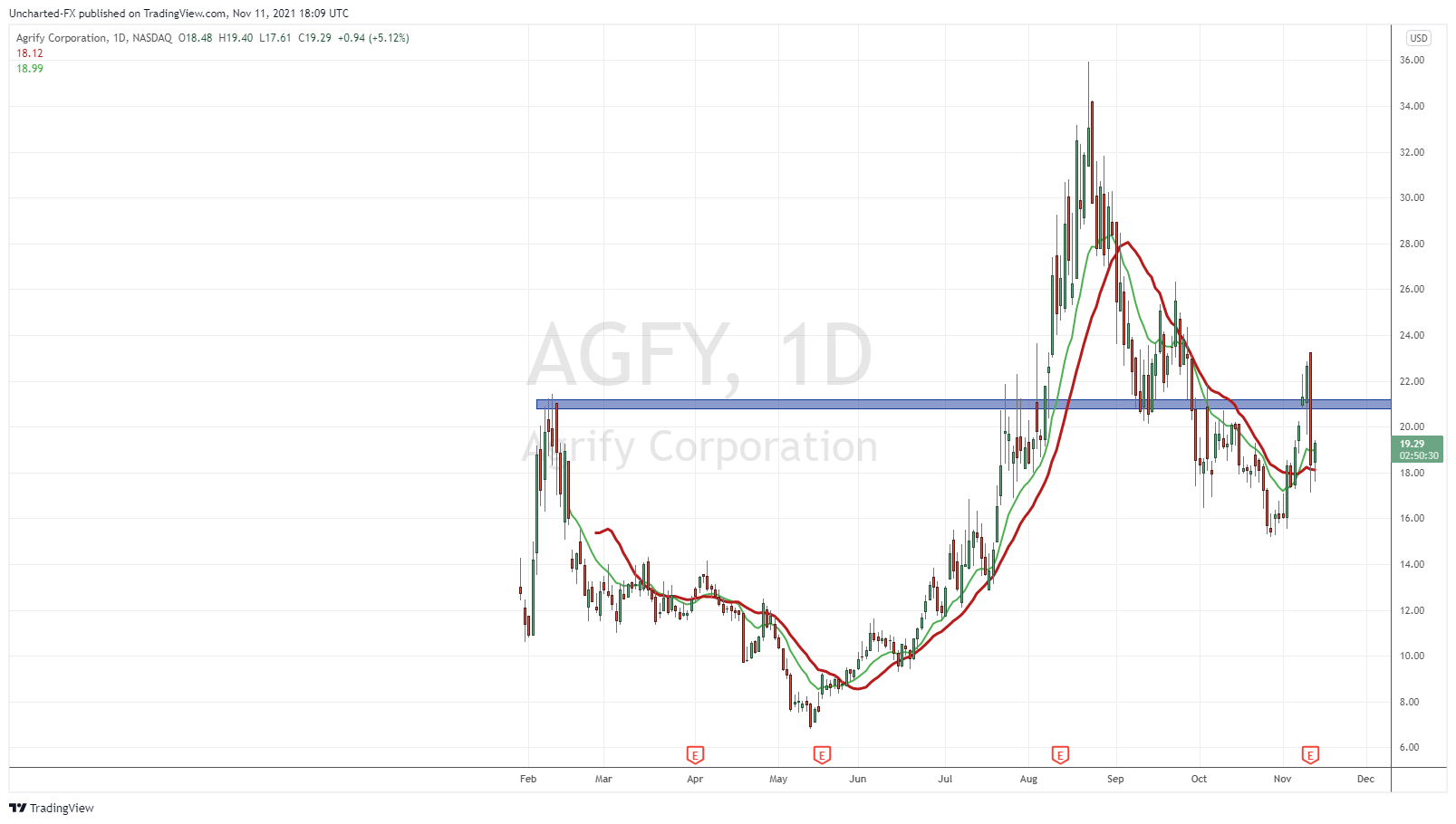 The stock did break above a major resistance zone, but then sold off hard on earnings. We need to climb back above the $21 zone. Price has crossed above my moving averages, so a reversal could be in the cards. We could be setting up some sort of reversal bottoming pattern here. I will keep tabs on this one.

Another earnings play! But this time, the chart is more supportive. Village Farms announced Q3 2021 earnings which surpassed estimates. Here are some highlights: 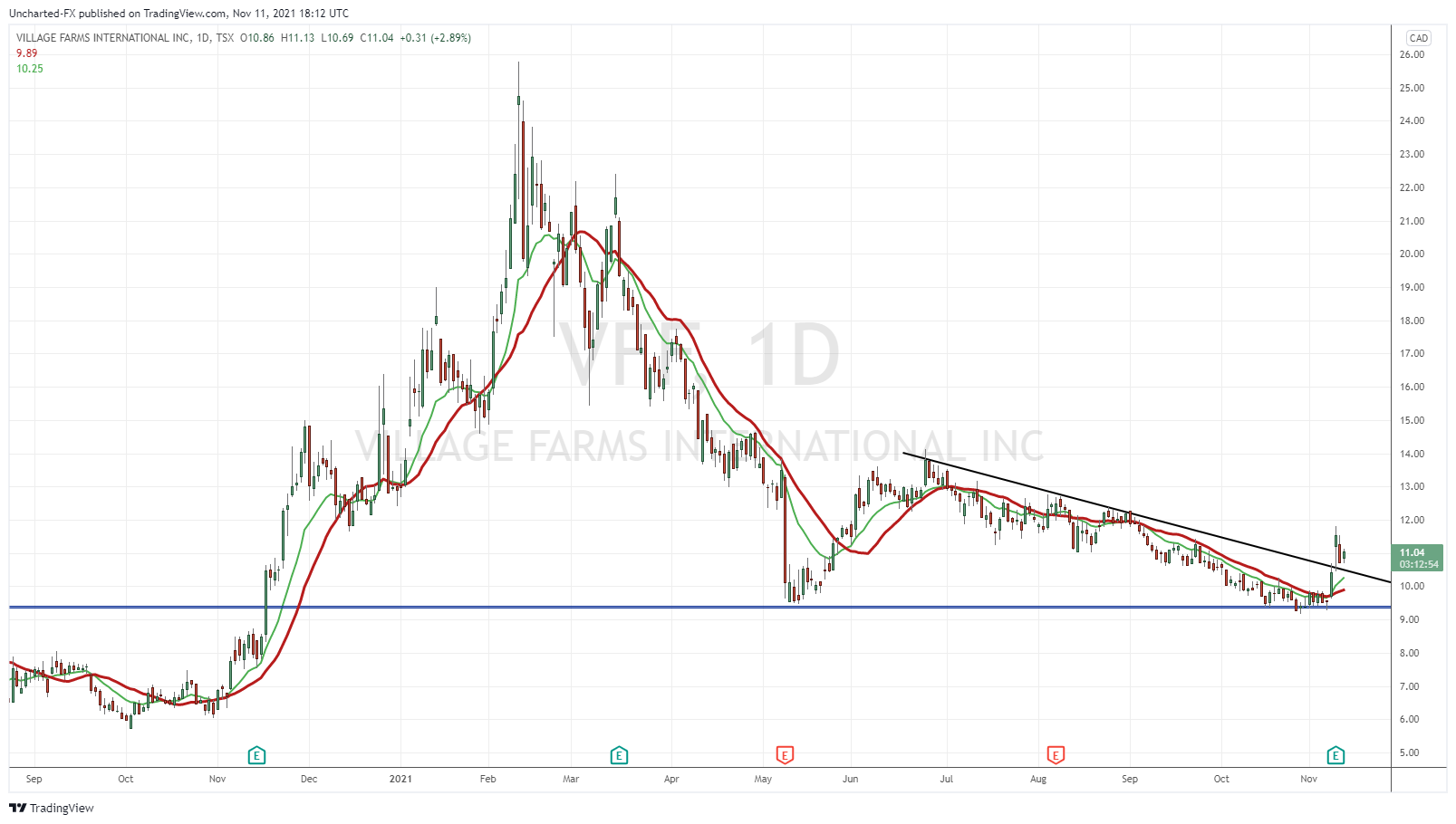 Just a beauty. We spoke about the basing in previous ag sector round ups. Earnings have given us a breakout. A trendline has been broken and is currently in the retesting phase. Buyers are stepping in. I should say that we are seeing a nice pop in the Cannabis space. Republicans in the US are now leading the Cannabis legalization charge. We will be seeing more political headlines next week as Nancy Mace is set to give a press conference on the My States Reform Act, which will codify Cannabis reforms, on Monday.

Nick Brusatore CEO: “This application adds previously developed technology to Affinor’s IP and scaleup pipeline. We have been at this a long time, and now have a clear path to drive our future as a company and as a vertical farming leader. On behalf of the board of directors, management, and all advisors, we thank our shareholders for their patience and support. We look forward to defining new ‘Affinorian’ techno-culture as we become an ESG world leader in the vertical farming production and technology space.” 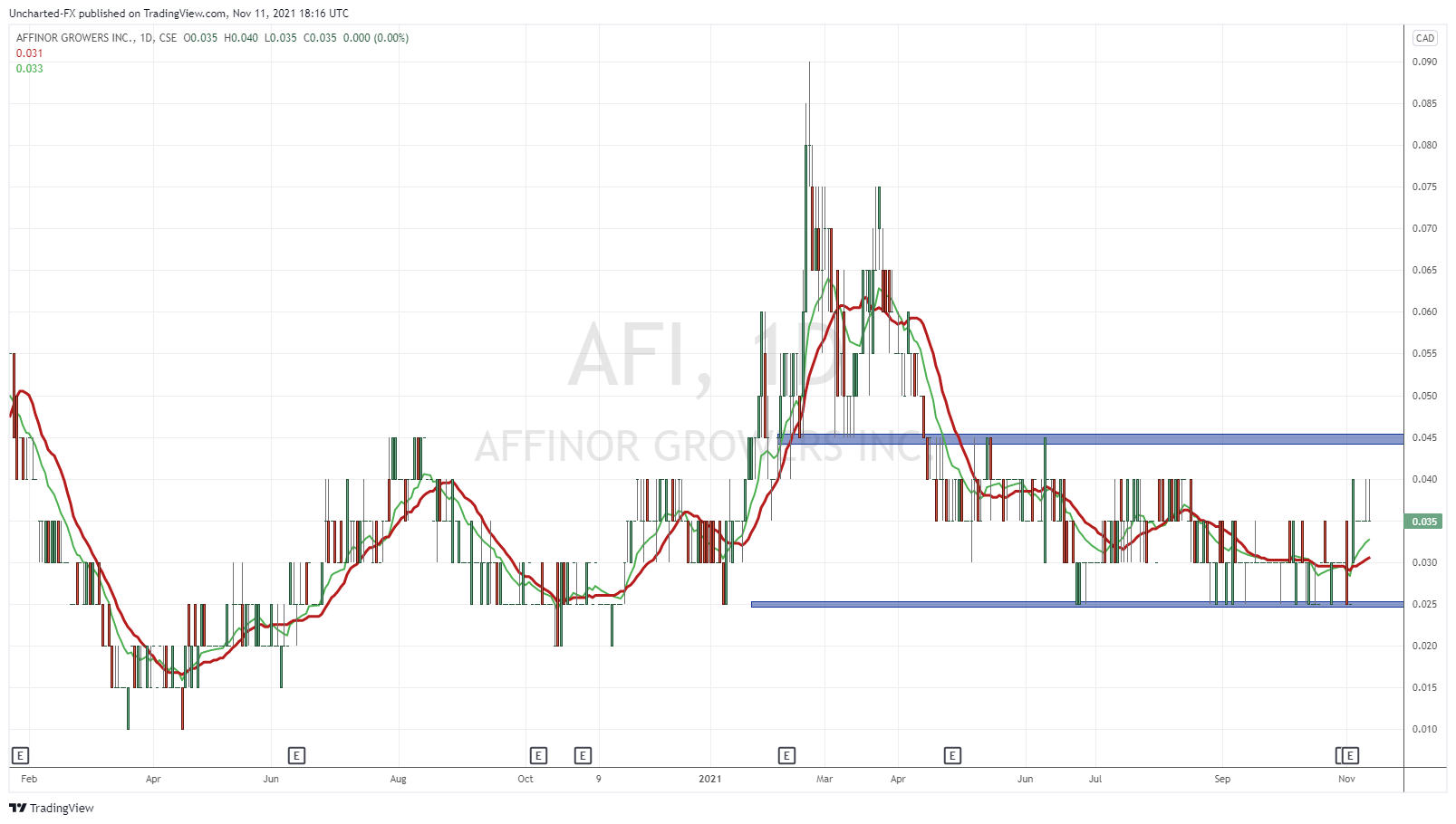 Simple technical play. Just a range. Once broken, we see the real move. Volume on this stock fluctuates. Sometimes days of a few million shares traded…or some days where 4 hours in trading, only 83 shares have been traded.

Maple Leaf Foods was discussed last week. Great earnings and forward guidance got the stock to pop and break a key resistance level. We have now pulled back to retest the breakout zone. Watch for new buyers to step in here. If so, another momentum move upwards is on the cards! 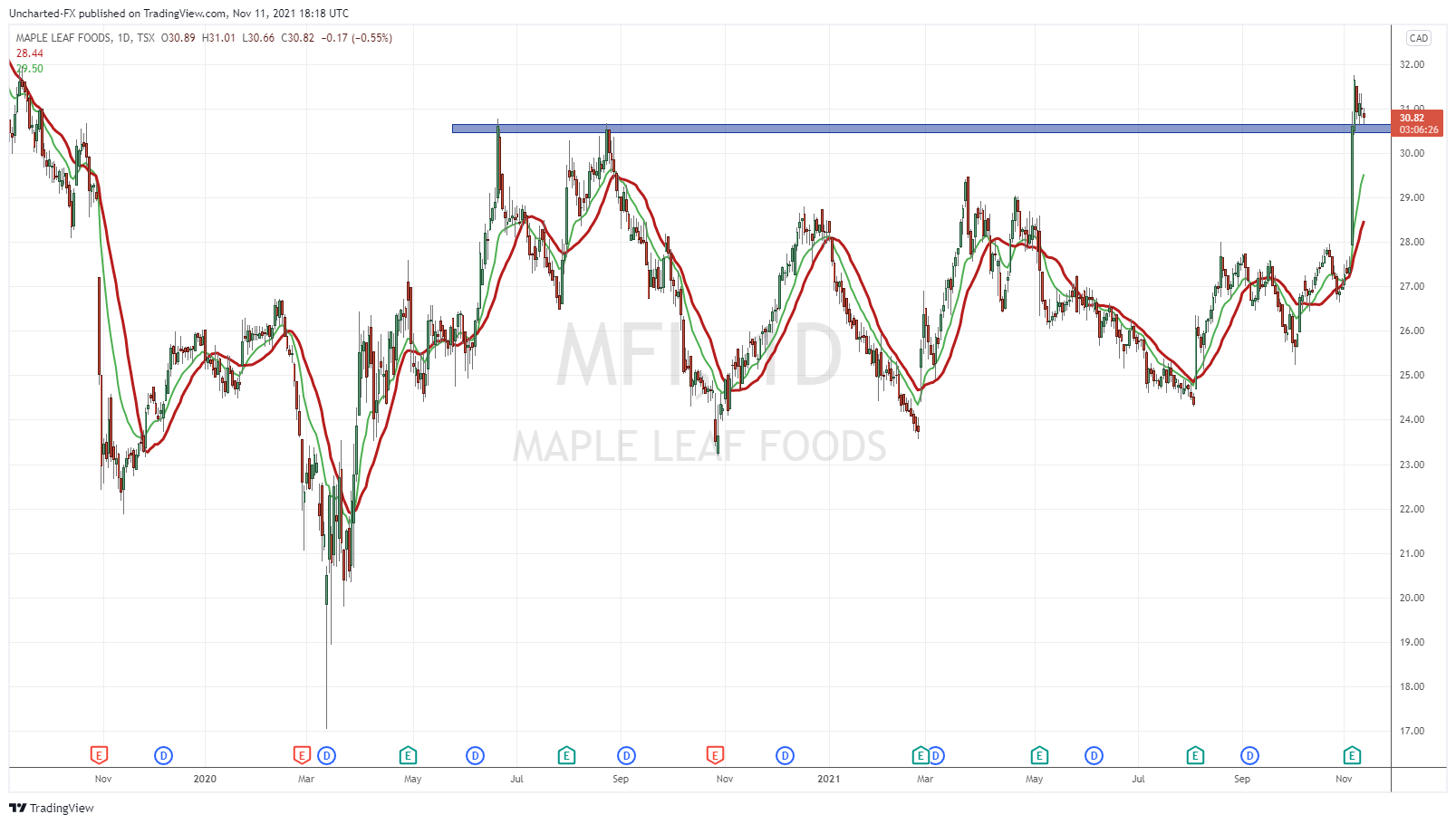 Similar circumstance on Sprouts Farmers just like Maple Leaf Foods. Great earnings last week, broke above a key resistance level, and now retesting the breakout zone. Lots of positive confluences on this one from a broken downtrend line, to a range to the breakout with a catalyst. Technically, all signs that a new uptrend is beginning. I expect to see buyers enter and hold $23.50. If we see more headlines of food supply shortages and rising prices, then some of these market/grocery chains will attract institutional buying. 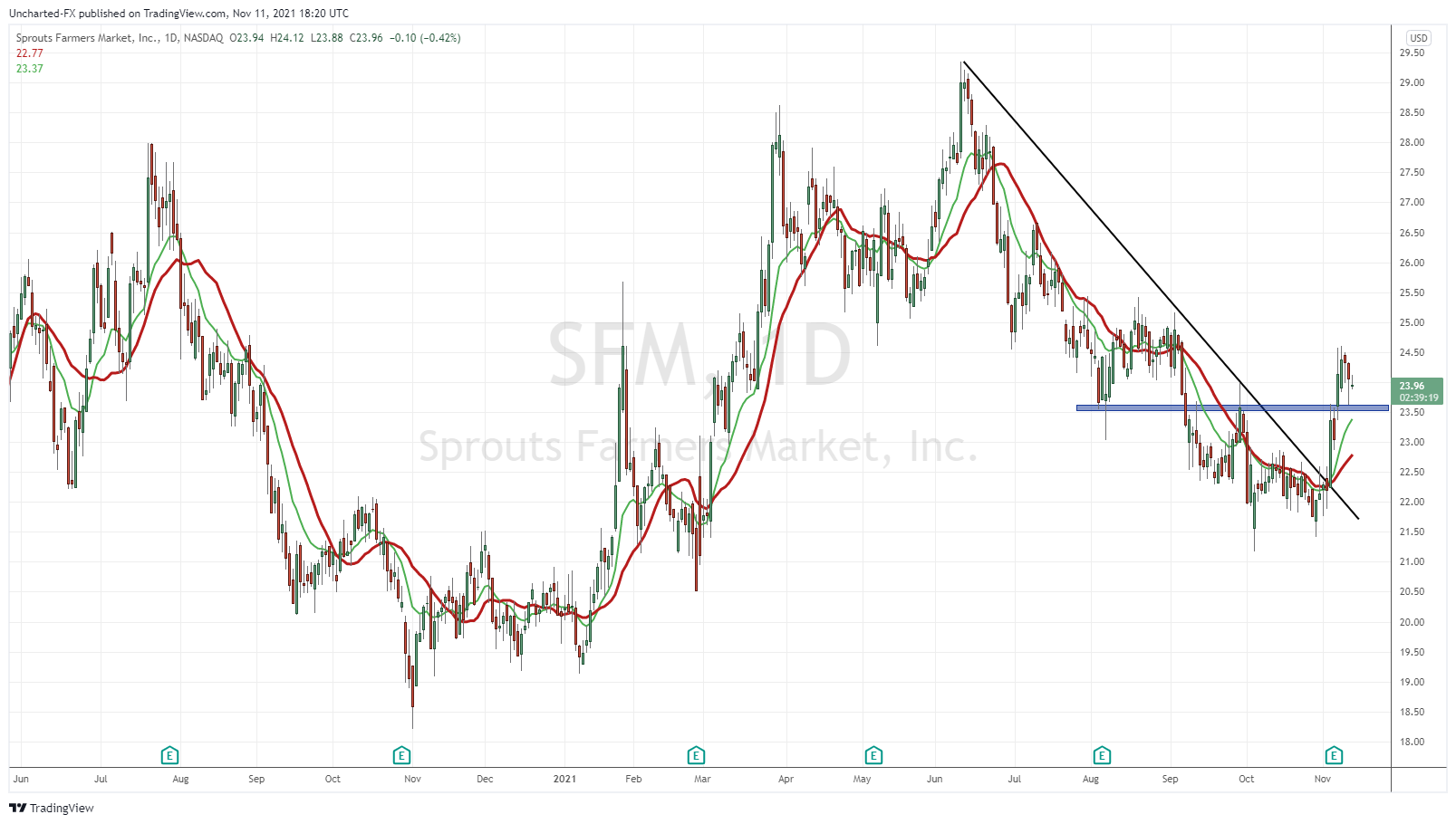 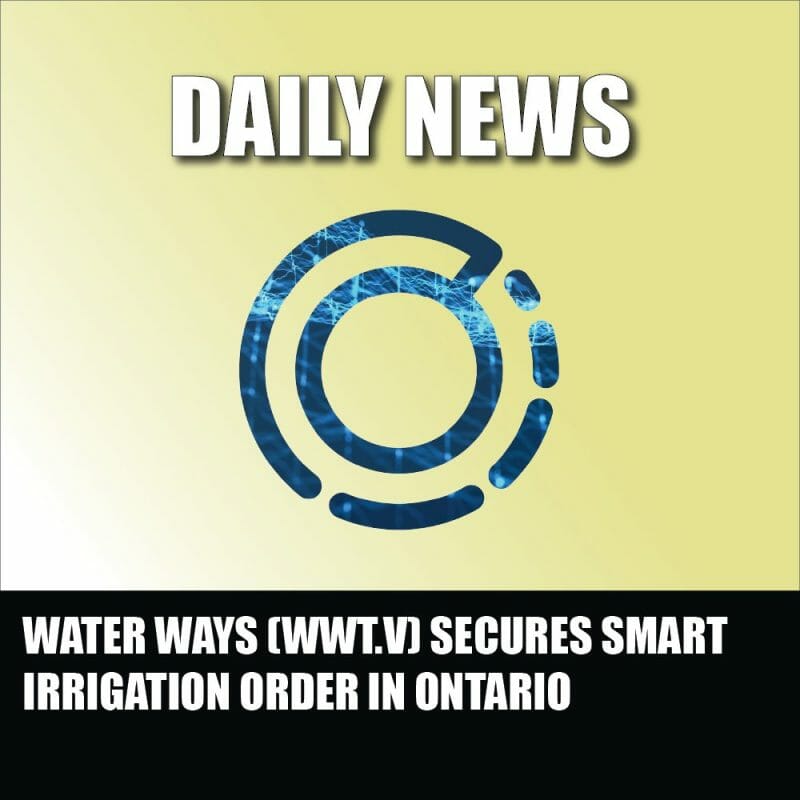 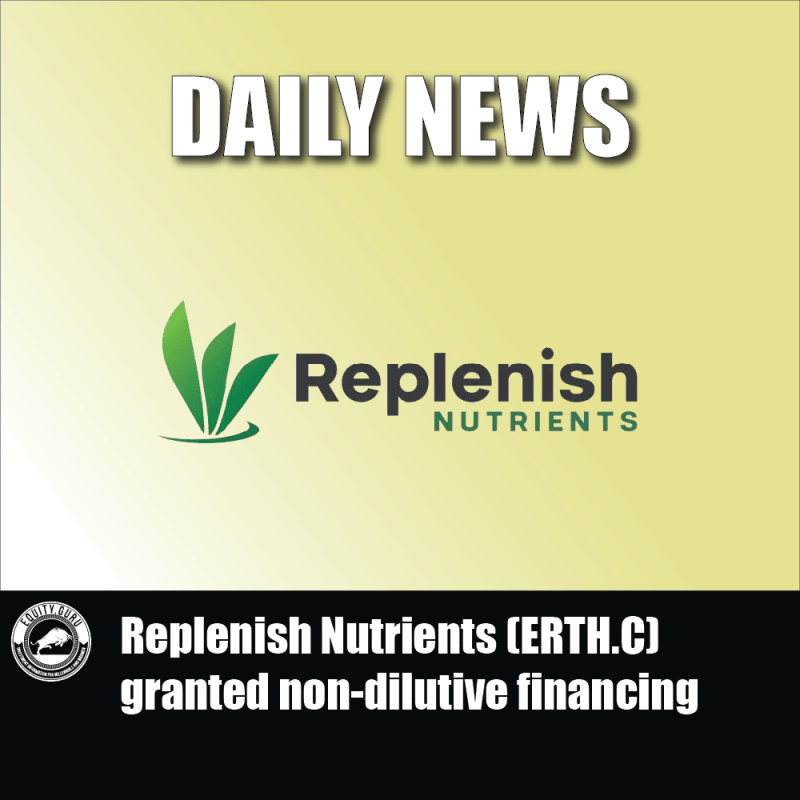 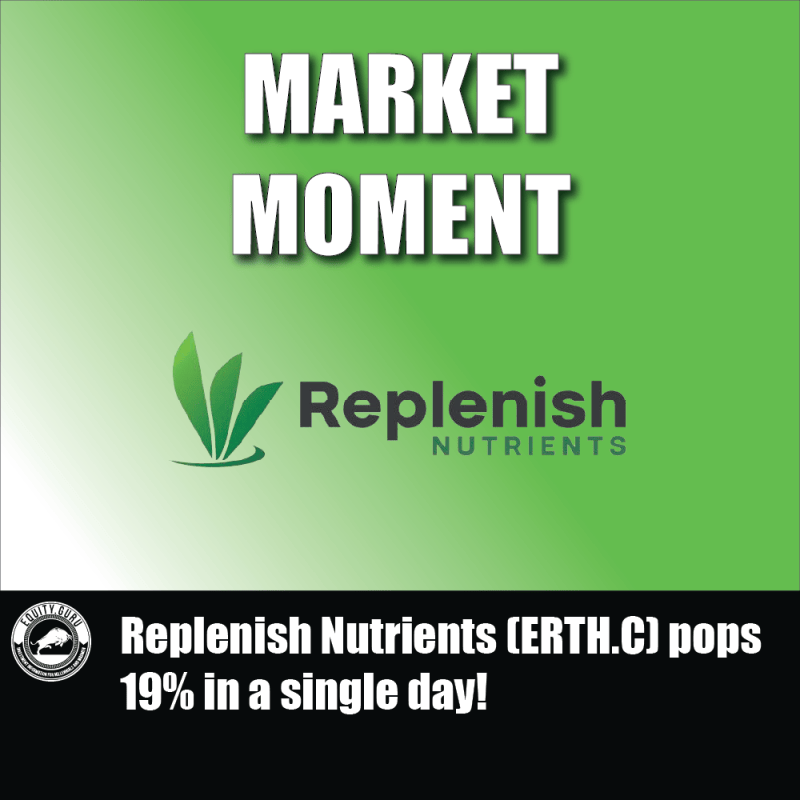 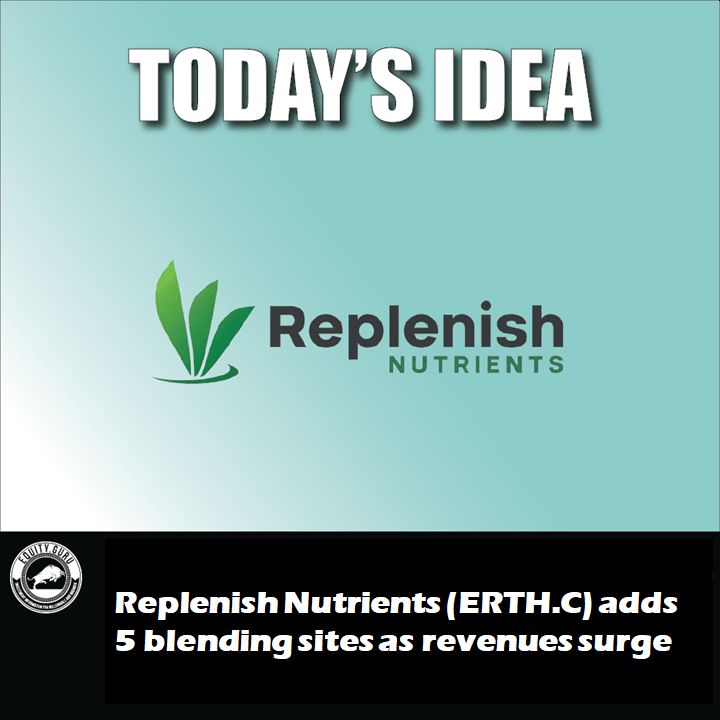 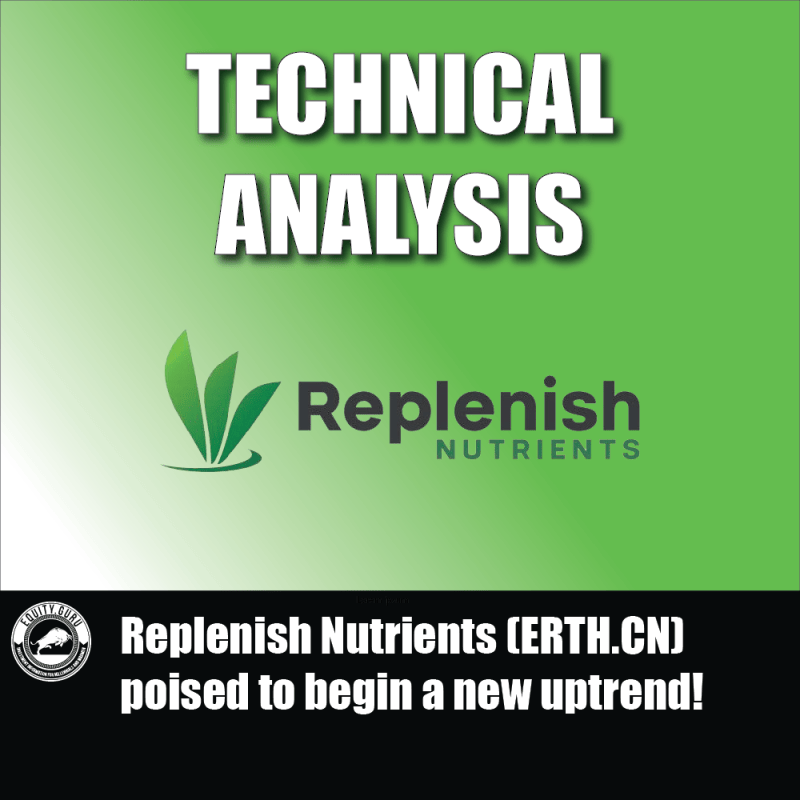 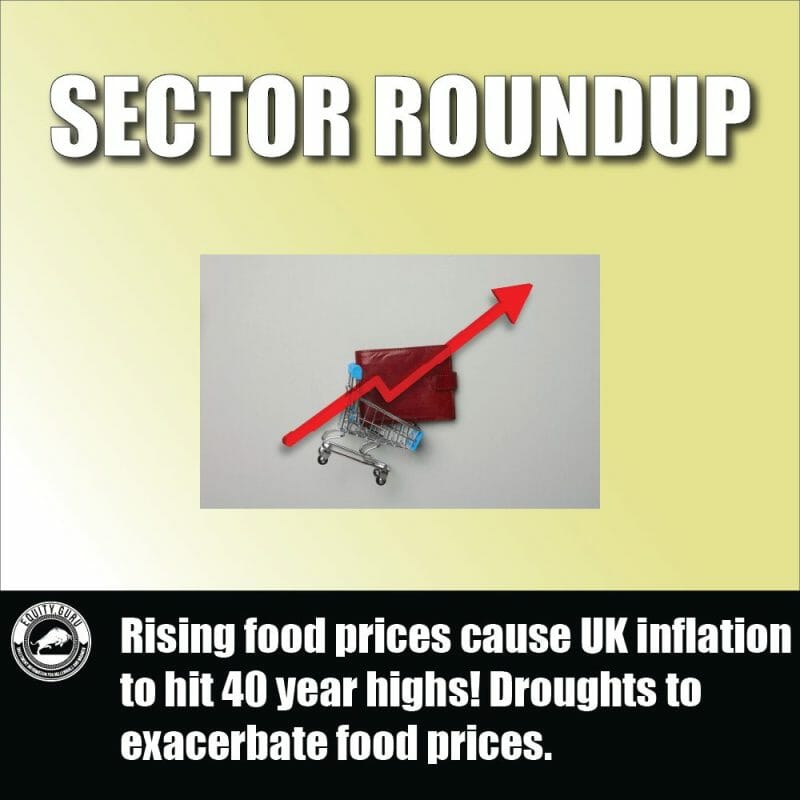