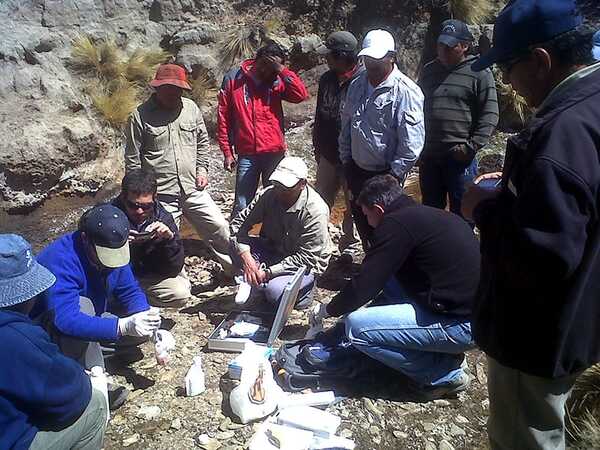 After carving out all-time historic highs in recent sessions, gold has entered a corrective phase marked by violent price swings, and heaps of volatility.

I saw $1,876.00 (Dec contract) cross my screen in overseas trade a few nights back. That could be the low for this rout, but I wouldn’t rule out a re-test in the days to come.

These are uncharted H2Os after all.

In the meantime, shortlisting high-quality entities and targeting sudden, anomalous weakness is a strategy that could pay off handsomely in the medium to long term.

Here’s one such “high-quality entity” for your consideration:

Golden Arrow’s (GRG.V) heart is in Argentina. Backed by the Grosso Group—pioneers in the Argentine mineral exploration arena since the region was opened up in the early 1990s—the company has its sights set on yet another significant South American discovery as a burgeoning bull market in mining stocks is finding a whole new gear.

If you’re unfamiliar with the Grosso Group, they have a solid track record of discovery success and creating shareholder value. Examples: the world-class Gualcamayo project that was put into production by Yamana (YRI.T), the Navidad Silver project, THE world’s largest undeveloped silver deposit currently held by Pan American Silver (PAAS.T), and the Chinchillas Mine that was recently put into production by SSR Mining (SSRM.T).

The company has three main projects in its portfolio, one in Argentina (Flecha de Oro), one in Paraguay (Tierra Dorada), one in Chile (Rosales), and the way I see it… all three are vying for flagship status. And importantly, all three will receive a proper probe with the drill bit before year-end.

All three of these projects are near-surface and should the surface grades extend to depth, they’ll be advanced quickly. This is an important consideration as these are early-stage projects.

The company is also actively kicking tires, looking for an advanced stage project to add to their lineup.

Before we explore further, I should mention that the company dropped its option on the advanced stage Indiana gold-copper project in Chile last month. Some felt it was a bad move on the company’s part—Indiana had a (historic) resource with decent grades and significant exploration upside. The (historic) resource was spread out across multiple zones though (guts n feathers by my reckoning). Management felt there were too many issues with the project and decided to drop it.

The following slide traces the company’s journey with Chinchillas, from discovery to monetization. 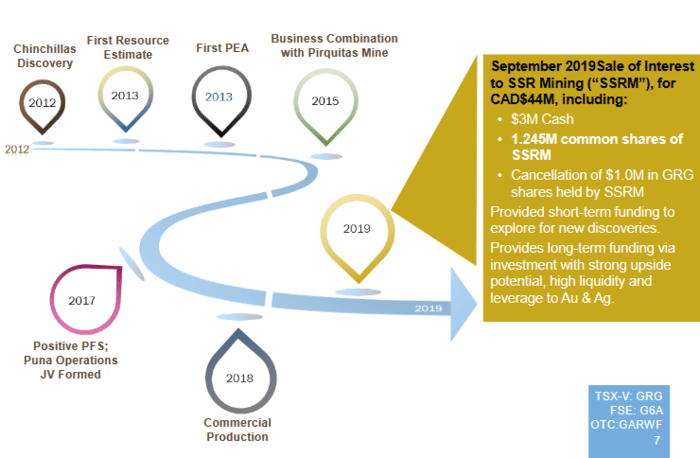 As noted in the above slide, on September 19, 2019, the company sold its 25% interest in the Chinchillas Mine (Puna Operations) reaping the following benefits:

Those SSRM common shares went on a bit of a tear since the transaction was completed late last summer.

With mineral exploration being a capital intensive game, Golden Arrow is in an enviable position with this SSRM stock position. Even though the company liquidated a good chunk of said position, they should have sufficient cash (and cash equivalents) on hand to advance any one of their current projects to the PFS (prefeasibility study) stage, or acquire one or more weighty advanced stage projects.

Brian McEwen (Golden Arrow’s VP of Exploration), during a recent interview, was determined to pound home the point that the company is actively kicking the tires on a number of projects, stating:

“This money in the bank is burning a hole in our pocket… we are actively pursuing and looking at other opportunities… we’re looking at many many things right now.”

$30M will buy a lot of geology, says this humble observer.

An acquisition headline could be the next major catalyst for the company.

Keep in mind that these are all early-stage. 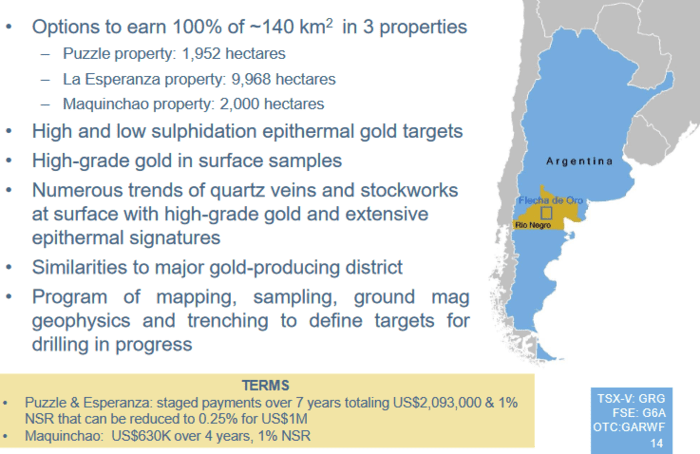 The gold mineralization at the Puzzle property occurs in epithermal quartz veins, stockworks and hydrothermal breccias, hosted by a 150-250-million-year old volcanic complex. Gold mineralization at Puzzle was originally identified by previous owners in an outcropping epithermal quartz vein which can be traced for over 1,400 metres along strike as a series of showing, and in an adjacent area with quartz float material. Due diligence surface sampling and ground magnetic surveying confirmed the presence of a SW-NE corridor at least 2.3 kilometres long and up to 200 metres wide defined by a main quartz vein forming a topographic high and an adjacent quartz stockwork zone.

The La Esperanza property is located in the same regional geological environment, with mineralization hosted by an older suite of granites and granodiorites with aplitic and pegmatitic dikes associated with the volcanic complex underlying the Puzzle property. At the La Esperanza property 17 kilometres of veins, with widths of up to 7 metres, occur as swarms of quartz and chalcedony veins with banded, colloform and crustiform epithermal textures.

On June 8th, the company reported results from a mapping and surface sampling campaign—an effort that successfully delineated a new high-grade gold target on the Esperanza property. 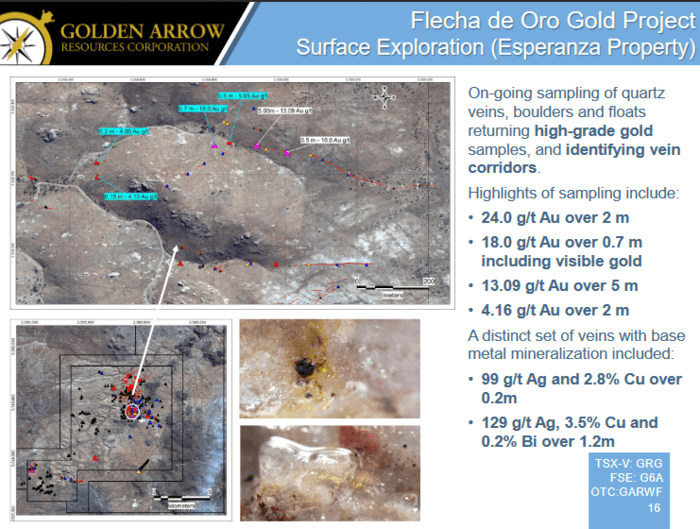 The company is eager to push this project further along the curve, but C-19 travel restrictions are currently holding things back. We should see a drill rig mobilized to the project before 2020 draws to a close.

“The Flecha de Oro exploration program is advancing nicely with the addition of this new high-grade gold target at the Esperanza property, located more than a kilometre and a half north of the high-grade samples we reported in early March. In addition, the new Maquinchao properties expand our prospective area, further increasing our chances to discover a major epithermal deposit at the project.”

The high-grade samples McEwan referred to above are as follows: 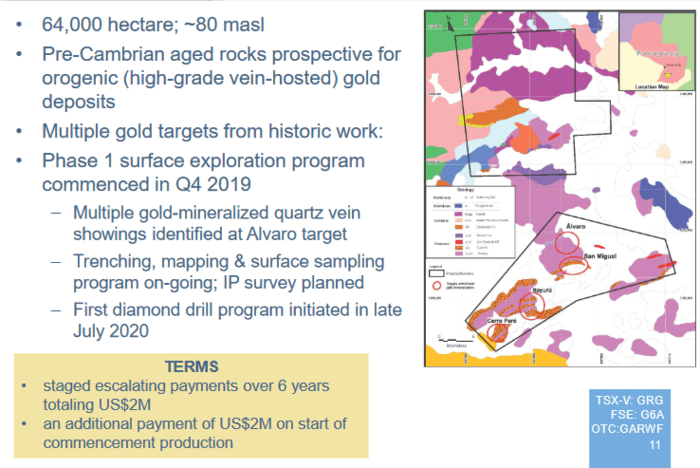 The southern property block has been the focus of most of the historical exploration work to date in the area, with four main target areas delineated. The most advanced of the four targets, San Miguel, includes two parallel northeast trends approximately three km in length, with iron rich laterites developed in quartzites and gneisses. Previous work at San Miguel included soil and rock sampling, and pan concentrate collection from stream sediments. Previous operators included The Anschutz Co. in the late 1970´s and early 1980´s, and Yamana Gold Inc. in the 1990´s. Yamana carried out trenching and drilled six shallow reverse circulation holes along the eastern trend defining gold mineralization in laterites. There is no public report available for this work, however drilling sections have been obtained showing geology and assays from four vertical holes up to 88 m deep.

On May 27th, the company released results from a Tierra Dorada trenching campaign:

Over one kilometre to the south of Trench 1, a boulder sample returned 13.7 g/t Au.

Satisfied they have a prospective target in their crosshairs at Tierra Dorada, the company dropped the following headline on July 30th:

This is a modest drilling campaign—500 meters—one that will test the Alvaro target area.

Rosales is a recent acquisition:

This wholly-owned project has several high priority targets characterized by zones of near-surface copper stockwork mineralization, with the potential for a larger mineralized system at depth. The area is surrounded by infrastructure. 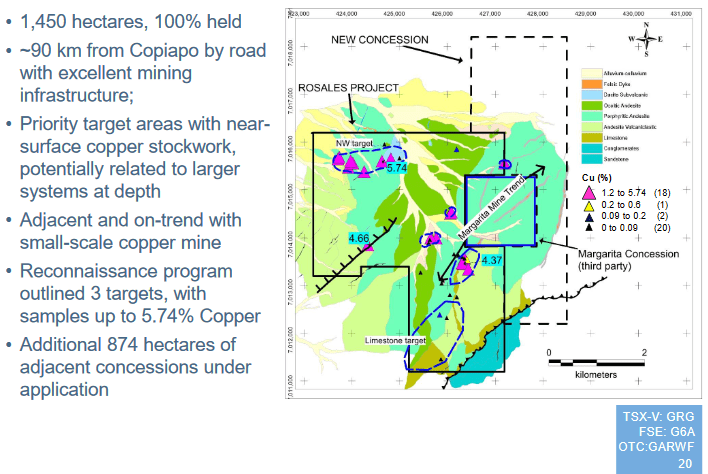 Rosales has high-grade, near-surface copper. As stated further up the page, should the surface grades extend to depth, the project can be advanced swiftly. High-grade rock requires fewer tonnes to pile on the pounds. These high-grade vein settings DO require more drilling though.

A phase one exploration program will include detailed mapping, surface sampling, and property-wide geophysics.

We should see a drilling campaign here by year-end too.

For me, Golden Arrow is a no-brainer. The company has three prospective projects, $30M in cash and marketable securities on its books, and a market cap of $22.11M. You do the math.