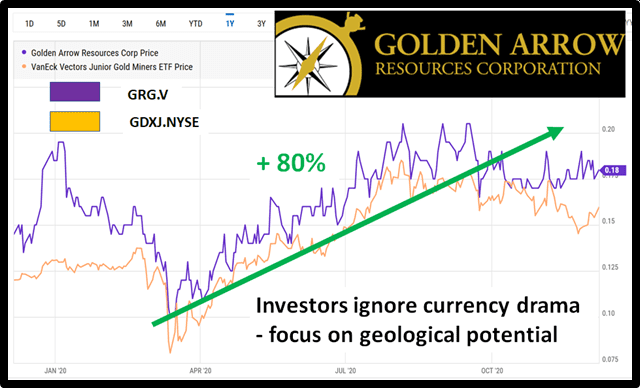 “GRG is backed by the Grosso Group—pioneers in the Argentine mineral exploration arena since the region was opened up in the early 1990s,” wrote Equity Guru’s Greg Nolan on September 16, 2020, “The Grosso Group has a solid track record of discovery success in Argentina”…

“Having monetized its stake in the Chinchillas asset roughly one year back, the company has its sights set on yet another significant South American discovery as a burgeoning bull market in mining stocks is looking for a whole new gear,” continued Nolan.

“That Chinchillas monetization event put the company in an enviable position. Golden Arrow has roughly $28M in cash and equivalents in its coffers, ample funds to explore its current project portfolio, and pounce on any new acquisition opportunity it deems a worthy fit…

The company has three main projects in its portfolio, one in Argentina (Flecha de Oro), one in Paraguay (Tierra Dorada), one in Chile (Rosales), and the way I see it, all three are vying for flagship status.” – End of Nolan.

The Flecha de Oro trenching & sampling program will focus on The Puzzle Property, where gold mineralization has been identified in a large quartz vein and adjacent quartz stockwork zone within a corridor over 6.5 kilometres in length and more than 150 metres in width. 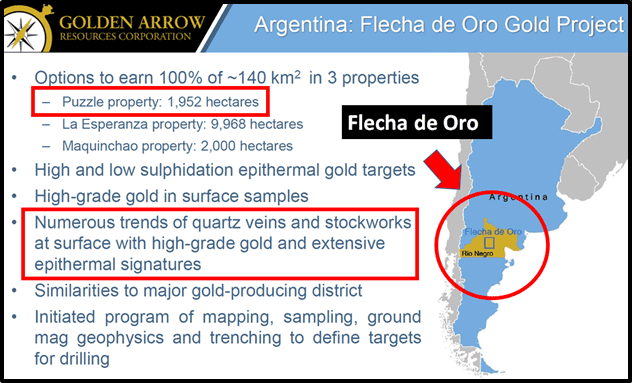 “We are pleased to be back to field work in Argentina, and in particular at the Flecha de Oro Project,” stated Brian McEwen, Golden Arrow’s VP Exploration and Development, “It’s a great time to be exploring for gold, and at this project where we have the potential to identify multiple large gold systems. We look forward to a busy 2021 during which we will be actively exploring at all three properties that comprise Flecha de Oro.”

“The vein corridor at Puzzle is coincident with a magnetic low,” states GRG, “The trenching program is planned to include approximately 18 trenches totaling 2,500 metres, excavated across the vein corridor along 6.2 kilometres of strike length, to delineate targets for a potential 2021 drilling program. 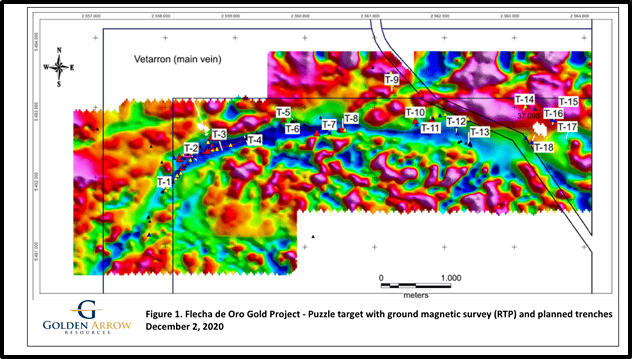 The Flecha de Oro Gold covers 13,920 hectares in an area that is prospective for large epithermal precious metal deposits. Applications have been made for two additional concessions totaling over 2,500 hectares around the Puzzle property.

For context, the current 13,920-hectare Argentine property is 34 X the size of Stanley Park.

With a modest $20 million market cap, you don’t need an advanced degree in geology or metallurgy to recognise the value in GRG’s three gold properties.

In December, 2020 Argentina is in economic distress – catalysed by policy failure and exacerbated by the Covid-19 pandemic.

To put it bluntly, Argentina’s fiscal clean-up appears to be modelled on this dude’s bedroom-sprucing technique.

39,000 Argentines have died from Covid-19. With a population of 40 million, the death rate in Argentina is even worse than the U.S.A.

“Argentina desperately needs to rev up trade flows,” reports The Guardian, “But they have been gummed up by tough capital controls keeping the peso artificially strong, sparking fierce demand for black market dollars and prompting widespread angst about devaluation”.

Last week, “Argentina moved to safeguard the poorest in society after Senators passed a one-off levy on millionaires in order to pay for coronavirus measures,” reports The London Economic, “Those with assets worth more than 200 million pesos ($2.5 million) – some 12,000 people – will be asked to step up to fund medical supplies and relief measures amid the ongoing pandemic”.

Argentina is not about to push Finland out of its #1 Fraser Institute Top Mining Jurisdiction Ranking, but there is reason to believe this incredibly beautiful country will get its shit together.

Argentina currently generates about 4% of its GDP from mining.

President Alberto Fernández has stated that “the mining business is a key factor to help Argentina become more prosperous.

“Biden’s https://e4njohordzs.exactdn.com/wp-content/uploads/2021/10/tnw8sVO3j-2.pngistration will play a key role in the IMF agreement Fernandez’s government is negotiating,” continues Bloomberg, “The U.S. is the IMF’s largest member by financing, and any major Fund agreement requires U.S. backing.”

The 1-year GRG chart below indicates that many investors are eye-balling GRG’s mineral assets in the context of a nascent gold bull market. 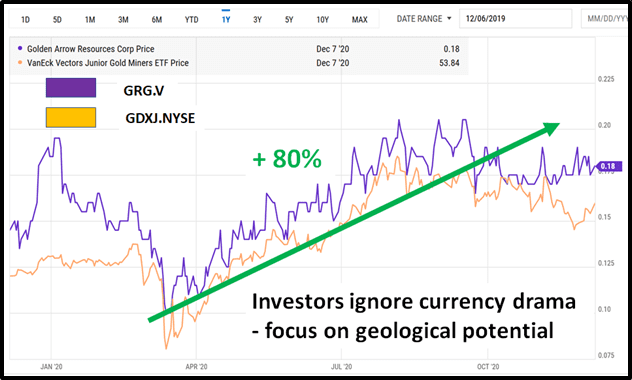 GRG’s technical team in Argentina has obtained all permits required for the trenching & sampling program at Flecha de Oro, including approval of new COVID19 protocols that follow the guidelines provided by the provincial and local authorities, and the installation of a temporary camp at the Project to avoid contact with the nearby community.

The GRG team is now on-site, and the work is expected to continue until approximately the end of January.

In subsequent articles, we will provide updates on Golden Arrow’s Paraguay and Chile assets.