Typically, when an incompetent or disgraced CEO is pushed out of a company, the stock price goes up, as the vestigial stink is blown out of the room.

For example, when the co-founder of Equifax (EFX.NYSE) Richard F. Smith was forced to resign after a massive security breach – the stock surged 20% in the following months.

When Steve Easterbrook, the CEO of McDonald’s (MCD.NYSE) was ousted after he had an “inappropriate relationship with an employee” – MCD stock went up 14% in the next 30 days.

On June 17, 2020 MedMen (MMEN.C)’s two greedy, narcissist co-founders, Adam Bierman and Andrew Modlin were stripped of all duties and pushed from the Board of Directors.

Since then, the MMEN stock price has continued to fall.

Apparently, the stink created by Bierman and Modlin is still lingering. 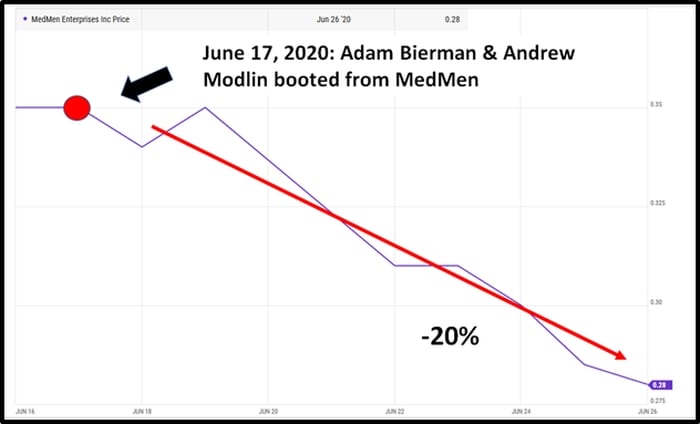 “In a sector rife with terrible CEOs that have wasted company treasury and goodwill…none come close to Bierman in terms of self enrichment, entitlement, and outward facing douchery,” wrote Chris Parry on January 31, 2020, “Adam Bierman was not the CEO the cannabis sector needed. He was the CEO the cannabis sector deserved. Good riddance, shit bag. We were right about you all along”.

Three years ago, Bierman and Modlin were the Kings of Cannabis.

“There is no reason we cannot be the biggest marijuana company on the planet,” Bierman bragged to the Rolling Stone, “I’m sitting with aces in the game of a lifetime.”

Andrew Modlin – a former oil painter claimed that “MedMen is my canvas. This is the biggest art project of my life.”

At its peak, MedMen had a $2 billion market cap.

The company is now worth a paltry $72 million. 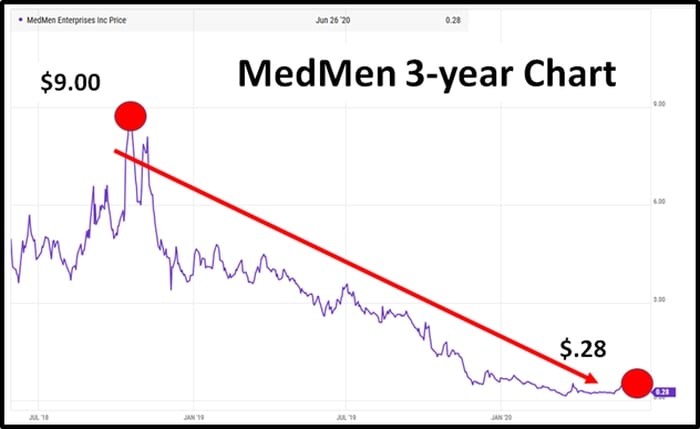 “In May 2020, Nevada regulators began looking into an allegation by former MedMen Chief Financial Officer James Parker that Bierman and Modlin made illegal campaign donations to the state’s governor,” reported MJ Biz Daily.

On June 17 2020 MedMen also announced today that a settlement has been reached to resolve Brent Cox and Omar Mangalji’s lawsuit.

Cox and Omar Mangalji were early investors who sued MMEN after $179 million dollars worth of shares got locked up by MedMen CEO Adam Bierman and President Andrew Modlin who controlled most of MedMen’s voting shares.

As a result of the arbitration, MedMen will issue 1.5 million Class B Subordinate Voting Shares to MMMG-MC as a part of the overall 24 million share settlement.

Cox and Mangalji are probably not dancing for joy.

These shares are now worth $6.2 million which means they’ve taken a 96% hair cut from the peak value of the shares they were owed.

“Although MedMen denies any wrongdoing,” stated MedMen, “the Company believes its contribution to the settlement is in the best interest of its shareholders. The parties are in the process of dismissing the arbitration and court proceedings as a result of the settlement.”

Last summer, “Modlin outgrew his West Hollywood digs and sprang for an upgrade, paying $11 million for a five-bedroom, seven-bathroom mansion in the Hollywood Hills,” reported Politico.com, “His new pad featured a cactus garden, an olive tree and a swimming pool. His new neighbors included Leonardo DiCaprio and Keanu Reeves”.

“In April 2020, a MedMen creditor said it was seeking to seize Bierman and Modlin’s personal homes as partial repayment for a debt,” reported MJ Biz Daily.

This stink just won’t go away.