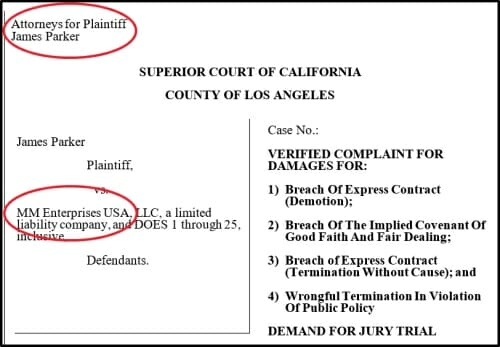 Here is the “Coles’ Notes” summary – directly excerpted from the lawsuit.

Adam Bierman is the CEO and Andrew Modlin is the President of MM Enterprises. Together they started the primary businesses that were restructured into MM Enterprises in a reverse takeover transaction in early 2018.

Self-proclaimed visionary entrepreneurs and “the ultimate disruptors,” they focused upon what they believed were the tremendous business opportunities in the growing legalization of marijuana under state law. 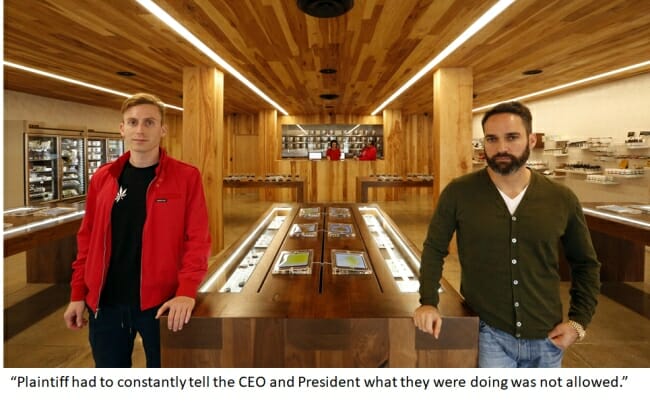 After paying each of the founders (who already own combined more than 20% of a $2 Billion market cap entity) $1.5 Million in salary a year, Plaintiff (Mr. Parker) was ordered to spend several millions of company dollars on such items as:

When Mr. Parker started to push back against the profligate spending, there was – the lawsuit claims – a concerted effort to squeeze him out.

Chairman of the Board, Ben Rose, met with Plaintiff and announced as a fait accompli “I understand you are moving into a more strategic role and I am very supportive”.

Subsequently, when Plaintiff protested to CEO Bierman that Plaintiff had not agreed to any such move, CEO Bierman replied “Fuck Ben Rose. He someone’s bitch.  Why do you care about him? The only thing that matters is our super-voting shares.”

(The CEO and President own all the super-voting shares, which shares provided them with enhanced voting power.)

Mr. Parker was forced to tolerate being ridiculed by Bierman and Modlin including being called “fat and sloppy”; a “pussy-bitch.”

Bierman referenced L.A. City Councilman Herb Wesson as a “midget negro” and referenced a rep. of the Drug Policy Alliance as a “fat, black lesbian.”

Bierman’s and Modlin also referred to women in conflict with them as “cunts.”

Plaintiff was ordered to wire hundreds of thousands of public dollars to a “consultant” in Canada to “buy up our stock when it is under attack”.  When the Plaintiff asked for the trading report he was told, “this was the way things operated in Canada.”

“MedMen senior V.P of communications Daniel Yi downplayed Parker’s significance with the company and promised it will fight back,” reported mjbizdaily.

“James Parker worked at MedMen for less than a year and a half, quit and is now demanding more than $22 million from the company while making wild allegations that have no basis in fact,” Yi wrote in an email to Marijuana Business Daily. “These are the baseless claims of a disgruntled former employee, and MedMen will vigorously defend itself in court.”

Editorial commentary: Parker’s accusations sync up with Equity Guru’s past observations of Bierman and Modlin’s behaviour.

On May 28, 2018, we pointed out “MedMen (MMEN.C) goes public Tuesday, but three executives will make most of the money on the deal.”

On July 18, 2018 we published an article, “As MedMen (MMEN.C) CEO buys new home, company is taking tips away from its employees.”

“MedMen executives have been micro-dosing human feces into the news-flow for so long, with such guile,” we wrote, “that MMEN shareholders are now fully acclimatised to the taste of shit.” 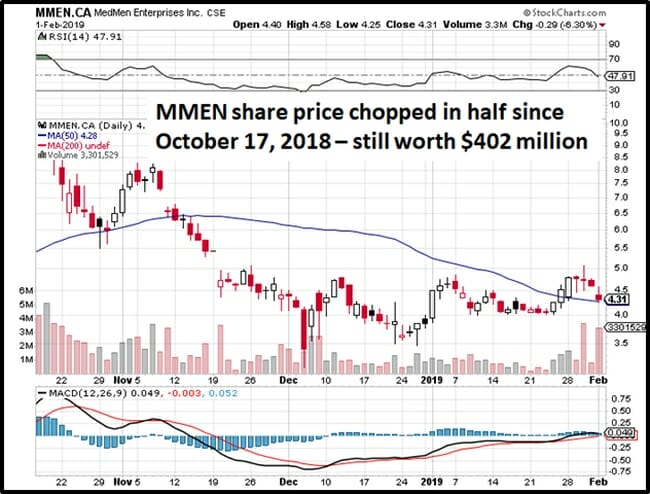 “They sound like raging coke heads,” wrote one investor.

“Birds of a feather flock together,” wrote another, “2 scumbags hire a 3rd to be their CFO who (shockingly) turns around and airs out their dirty laundry when getting fired.”

“This stock has been a radioactive turd in my book since their original prospectus,” stated a third investor, “This is as MedMen as you can possibly get.”