How Tesla (TSLA.Q) short-sellers lost their minds and their money

On February 3, 2020 Tesla (TSLA.Q) short-sellers (investors who bet against the stock) are losing their minds and their shirts.

The electric car maker’s stock surged 19% to close at $780 on Monday after Argus Research raised its price target on Tesla from $556 to $808, maintaining a “buy rating’.

“Our positive view assumes continued revenue growth from the legacy Model S and Model X, as well as strong demand for the new Model 3,” stated Argus, “Which accounted for more than 80% of Q4 earnings.” 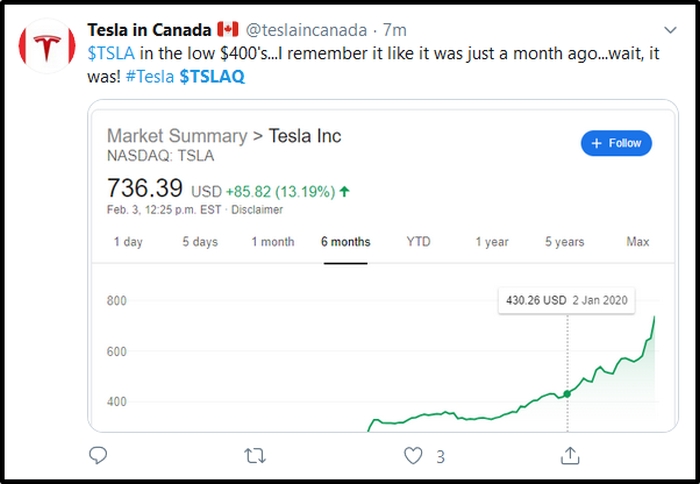 For the last two years, Tesla has been one of the most heavily shorted stocks on the NASDAQ.

“I was blown away by the performance, handling, and ergonomics of the Model S,” stated Street Authority in May, 2018, “But no matter how much I want to embrace the stock, it no longer makes sense.”

Fundamental Metrics: EPS is at nearly negative $10, P/E posts over negative 32, ROE reads negative 16.4%, and the stock carries a 240%-plus debt to equity ratio. There is no way these figures justify the $301 share price.

Debt: Tesla’s corporate debt has been downgraded from B2 to B3. Tesla has over $1 billion of convertible bonds maturing in November 2018. Bloomberg estimated the company spends an astounding $6,500 per minute, 24 hours a day, seven days a week.

Bearish Investors: Research firm S3 Partners has stated that Tesla has nearly $11 billion of shares on the short side. There is no question that the crowd is right this time!

The Elon Musk Factor: Elon Musk is a dreamer with monster-sized ambitions that are sometimes out of touch with reality. He attacked the analysts by calling them “boneheads”. Musk has reached the apex and I expect only downhill movement from here.

Historical Context: Tesla is an aggressive first-mover in popularizing electric cars. First-movers in any sector get the early advantage, but many soon fade out. Tesla’s 15-year, zero-profit streak is not going to end anytime soon.”

Recommend Action: Sell your TSLA shares if you are a long-time holder. Sophisticated investors can look to short the shares now at $306.00 or below with a target price of $190.00 per share – May 2018 Financial Advice

“Musk is the biggest short seller out of all of them. Why do you think he keeps acting like an idiot on Twitter right after the stock recovers?”, wrote one investor one a bull-board in October, 2018.” 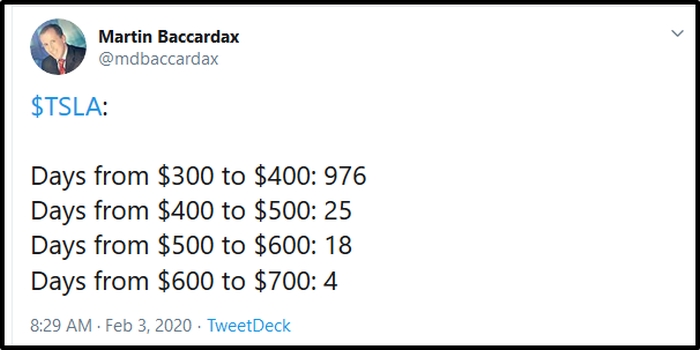 “Tesla short interest is $14.28 billion, 18.37% of its float. Short sellers have decreased their exposure by -1.78 million shares, -6.74%, over the last 30 days which equates to -$1.03 billion worth of short covering,” stated Predictive Analytics at S3 Partners this week. “There was active short covering ahead of Tesla’s earnings report.”

The maddening thing for Tesla short-sellers is that the market ignores palpable evidence that the CEO has lost the plot.

“Where are the aliens?”, asked Musk, “Really odd that we see no sign of them.”

“I need to find a girlfriend,” stated Musk, “How much time does a woman want a week?”

Tesla-shorters jumped for joy in May 2018, when a Tesla sedan in Autopilot mode crashed into a parked police car at Laguna Beach California.

“Thankfully there was not an officer at the time in the police car,” stated the Laguna police, “The police car is totaled.”

A Tesla driver in Utah also crashed while using Autopilot. Two fatal crashes while the system was being used also have occurred: one in California and a 2016 crash in Florida.

“Autopilot doesn’t make the car impervious to all accidents,” responded Tesla, “it is designed for use on highways that have a center divider and clear lane markings.” 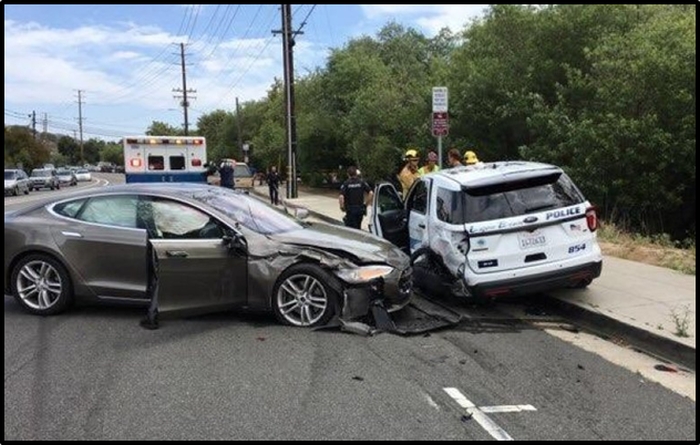 “A short squeeze can only turbocharge an upward trend that’s already in motion,” stated Loup Ventures, “short sellers don’t cover their positions when a stock price is static or declining. What’s the fuel that got this rocket off the ground?”

According to Loup, it’s not the latest earnings report, or the “Chinese Gigafactory”, it’s the fact that “Tesla has had no competition from the legacy automakers”.

“Tesla has nearly a decade head start in EVs because other automakers have under-invested in the space,” stated Loup, “Someday, inexpensive long-range batteries will be the norm, but for the next ten or so years, Tesla’s superior battery expertise will make it unbeatable.”

“Tesla’s short squeeze will probably shift into a higher gear as some short sellers re-evaluate their short thesis and begin to trim or close out their short exposure,” added S3 partners.

In 2018, Tesla short-sellers had coherent reasons for predicting the stock price would go down.

Some of those reasons still exist today (Tesla is valued like a tech company, not an auto-manufacturer).

If it’s any consolation, ten years ago, this writer bought put options on Amazon (AMZN.Q).

It took me years to forgive myself.

But I recovered, emotionally and financially.

Hell, I could buy a Tesla today if I wanted to.

But I think I’ll wait.

I’ve heard the price is going down.