Graph Blockchain (GBLC.C) has been busy in Korea snatching up blockchain service contracts with the Ministry of Transportation and the Korean Post.

‘They’re big in Korea’ probably isn’t much of a selling point for most North American investors, but despite Graph Blockchain’s distinct lack of love and attention, they’re still out there getting it done.

“This is an exciting opportunity for our company to introduce Graph database blockchain solutions to the Ministry of Transportation. We look forward to delivering a solution that will streamline and protect data for their smart city initiatives,” said Jeff Stevens, CEO.

The working definition of “smart”, according to the Seoul Metropolitan Government, includes any initiative that applies fourth industrial revolution technology, such as internet of things (IoT), for the convenience of its residents.

Imagine a city where everything from bus times to the number of available seats, to when the next subway will be pulling into station and where the optimal place to stand to transfer faster, is available at your fingertips.

That’s what Seoul’s doing with their transport operation and information service. The data is gathered through the city’s already implemented barrage of sensors, used to make life easier for Seoul’s citizens, and stored forever using blockchain technology.

Park said blockchain solutions would be used to streamline administration systems, including a voting system, charity management, and vehicle history reports. In May, Park vowed that blockchain tech would be further integrated into citizen ID cards.

The second contract is with the Korea’s postal service, the Korea Post, and includes a partnership with Korean Telecom, in a pilot project to securely store data on Graph’s private blockchain.

These contracts aren’t for a lot of money for Graph Blockchain—they’re for $55K and $60K respectively—but they show that there’s some interest from large institutions in adopting private blockchain solutions.

These two contracts represent a significant change in trajectory for Graph, which had to cancel their previously discussed LOI to acquire Blockchain Innovations (BCI) and The Games Company.

The transaction was supposed to be Graph’s entry into the world of blockchain-aided e-gaming and Esports. Negotiations broke down, unfortunately, and Graph and BCI couldn’t come to terms that the company felt were in their shareholders’ best interest.

But BCI was just the beginning of Graph’s interest in Esports.

Next up, Graph hired Esports Capital (ECC) to help them get their feet wet in e-sports. It’s a good move, if it bears fruit. ECC has a good track record, having done business with leading industry companies like Electronic Arts (EA.Q), Microsoft (MSFT.Q), Twitch, Amazon (AMZN.Q), PokerStars and PartyGaming.

Graph is going to have to start showing something to investors, though, if they’re going to see any kind of price movement. Mostly, we’ve seen deals and LOI’s and the occasional patent, but no real functional revenue worth mentioning. 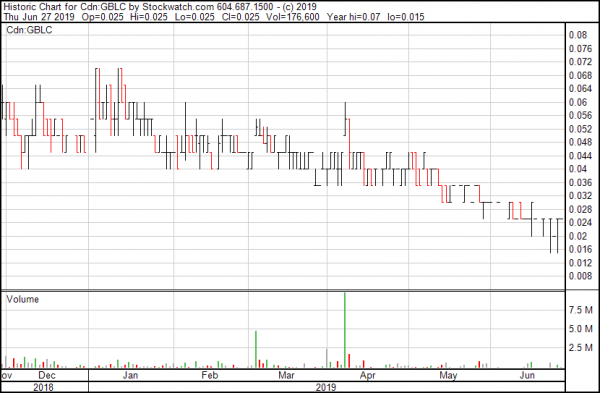 GBLC released their financials a few months ago and Graph’s isn’t even a year out of their RTO with Datametrex AI (DM.V), and it’s understandable that the company is going to take a loss, but $1,147,288 in revenue with a net loss of $6,368,121 in the same time period seems like maybe there’s something more than bad luck going on there.

But who knows? It’s the tail end of the crypto-winter of 2017 and blockchain companies may enjoy a boost as Bitcoin takes off.

For right now, though, Graph Blockchain’s price is hovering around $0.025.