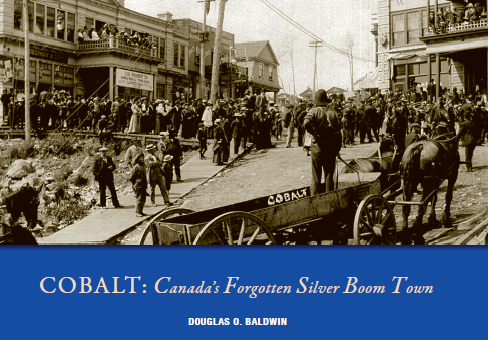 Canada Cobalt Works (CCW.V) dropped significant news on November 2nd. With barely 45 minutes remaining in the trading day, the stock broke out of its short-term holding pattern and went on a late session tear.

Before we peer into the fine details of Friday’s news, a brief refresher of some of CCW’s components (warning: this is NOT your ordinary junior exploration company):

The market was expecting high-grade cobalt values. Expectations were met. Exceeded. We also have high-grade silver and nickel to boot.

Highlights from the first three drill holes are as follows:

The maximum hole length for these first three holes was 30 meters. There is potential for additional high-grade mineralization at depth.

The table below gives you a nice breakdown of the ‘included’ values within the broader intercepts. Note that true widths are unknown at this time:

These are solid hits. Bar none.

The 2.28% cobalt over 7 meters encountered in hole CA18-001 towers over anything I’ve seen coming out of the junior Co exploration arena this year or last. Included within this impressive intercept are significant silver and nickel values.

The silver values encountered in holes CA18-002 and CA18-003 actually trump the cobalt, which is extraordinary, considering the Co grades. It’s conceivable that the silver, nickel and gold credits alone will cover the cost of production. I’m sure this is what CEO Frank Basa is aiming at.

“These cobalt grades are very high in a global context and demonstrate the unique opportunity at the Castle mine, from which we have already created battery grade cobalt sulphate through our proprietary Re-2OX process for evaluation by clients in Asia and Europe.”

“The purpose of this initial and continuing underground drill program is to confirm that the Castle vein structures do contain impressive cobalt values. Previous operators focused exclusively on mining high-grade silver through the 11 levels, ignoring cobalt and other metals such as nickel and gold.”

“We have a lot of room on the first level while pump testing continues to the second level, beginning at a depth of 25 meters. In light of these initial results, we are accelerating efforts at deploying the most effective underground techniques to fully leverage the Castle mine cobalt opportunity for shareholders.”

The above assays represent only the first three holes out of sixty-seven drilled so far this year. Fueling speculation, the company’s August 24th news release stated the following:

“… ongoing underground drilling has intersected visual cobalt mineralization in most of the 40 drill holes completed to date, covering a distance of 200 meters…”

There are no guarantees, but the above noted visual cues suggest there are more high-grade assays on deck.

The Company eagerly anticipates additional assay results and has fully winterized the Castle mine for continued underground work including drilling over the coming months.

And let’s not forget about CCW’s recent discovery 1.5 kilometers east of the Castle Mine – 86 meters of “well-mineralized felsic Archean units at a downhole depth between 77 meters and 163 meters as well as mineralized mafic to ultramafic units above and below over significant widths starting from surface.” 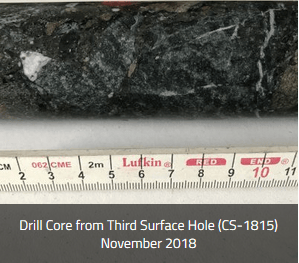 This discovery was the result of some impressive geological sleuthing as the anomaly lay hidden under a thin layer of sedimentary rocks. Geophysical surveys and methodical (MMI) soil sampling helped uncover the anomaly.

Canada Cobalt also expects to provide an update shortly on the surface drill program east of the mine where a potential new discovery has been made with the third drill hole of the 2018 program.

CEO Basa uses the term ‘real time’ to describe the progress the company is making on multuple fronts.

Aside from extensive exploration and underground resource definition drilling, the company is busy working real time on…

The goal of this ambitious ‘real-time’ business plan: production in 2 years!

If you’re new to the cobalt space and want to learn more about this dynamic company, the following Equity Guru offerings should bring you up to speed…

The company’s website is also recommended  – the video interviews are chock full of insight.

There is a strong case to be made that CCW is undervalued at current prices.

Disclosure: Canada Cobalt Works is an Equity Guru client. We own the stock.

Feature image courtesy of the Republic of Mining.