Myopia. According to the Merriam-Webster Dictionary, it’s defined as…

I might add a qualifier to point 2 in the above: someone (or something) that suffers from myopia might also exhibit an acute lack of intellectual insight.

It would appear to this humble observer that the Markets’ immediate reaction to recent news out of the Canada Cobalt Works (CCW.V) camp was altogether myopic.

I suppose it might be fair to state that the market was expecting more, it was expecting a plethora of high-grade cobalt assays outta the 1st level of its Castle Mine Project (it didn’t get them).

I suppose it might also be fair to state that when some of the less sophisticated hands in the stock – aka weak hands – didn’t realize immediate gratification in this October 24th news release, they did what they do best… the panicked and entered ‘market sell orders’ into their online trading platforms. This probably explains the $0.58 print low during the sessions post-news trading.

Kudos to those with enough of a sac to gobble up those deep discount sub-sixty shares. Seriously… nice shootin Tex.

A proper review of the company, along with the battery metals market in general, can be found here..

And, of course here…

The company announced that ongoing underground drilling has intersected visual cobalt mineralization in nearly all of the 40 drill holes completed to date. This drilling covered a distance of 200 meters. Assays for these 40 are pending.

Gosh, that sounds like a positive development to me.

‘Assays Pending‘ – these are the two words the HERD didn’t like, apparently. The trading action that followed was your typical run-for-the-hills type reaction.

This is how it all starts…

This is how rookie traders, with their sell buttons set on hair-trigger, self-destruct, one confidence rattling trade at a time.

If there were something in this news release which suggested the company was stumbling, there might’ve been justification for the liquidation. I couldn’t see any such indication. All I could see was progress on multiple fronts.

The company also updated shareholders on a high-priority drill target that was first brough to light in a July 31st news release – a potential new discovery area featuring a large circular basin approximately 1.5 kilometers east of the mine.

Regarding the first point above, it’s important to understand that in the 1980’s, Agnico Eagle was the operator of the Castle Mine. Agnico was after the silver. They had zero interest in the cobalt-rich vein systems that sprawled out across the underground workings. The metal had almost no utility back in the day. And as CEO Frank Basa has stated in a number of interviews – interviews which can be found on the company website – when the vein structures ran rich with silver, they ran poorly with cobalt… and when the veins ran rich with cobalt, they ran poorly with silver. Bottom line: many of the cobalt-rich veins were never mined. They’re still intact. They’re waiting to be exploited.

The cobalt is there. It won’t be long before we all discover the richness (the grade) and the thickness of these veins. So in the meantime, let’s just let Basa and his team do their thing. Let’s step back from our computer screens for a few minutes each day and chill the fuck out…

Commenting on the activity around the immediate area of the Castle mine, Jacques Monette, mine supervisor and Canada Cobalt director, commented:

Activity remains intense. In addition to continuing to intersect promising vein structures underground, with the latest drilling occurring near the #3 Shaft where there is an impressive network of veins, the pilot plant is operating smoothly while we’ve also launched a cost-effective program to dewater the second level of the mine.

I can’t help but wonder what they’ll find when they’re finally able to put boots to the ground on the second level of the mine. More of the same as in level one, more ‘untouched’ cobalt-rich vein structures? It’s been decades since anyone has been able to access that level of the underground workings.

The large circular basin approximately 1.5 kilometers east of the mine…

No, this wasn’t a UFO sighting. It’s a high priority drill target where a drill rig has been on standby for the past few weeks while the company took a closer look. Well, that rig has been mobilized to the target and is now probing the subsurface.

This first phase of drilling will consist of a minimum of 2,000 meters. The company will be testing a number of targets in what it’s describing as “a broad potential new discovery area“. This is very exciting. The old adage, “the best place to find a new mine is in the shadow of a headframe”, certainly applies here. Aside from Castle, there are two other significant past producers in the vicinity of this new target area.

Commenting on the prospective nature of this new target area, mine supervisor Monette stated:

Surface drilling more than a kilometer east of the mine has crews excited about the prospect of a potential new discovery.

This August 24th news release also made a point of highlighting the company’s proprietary metallurgical process it calls Re-2OX. This is an asset that isn’t fully understood by the market. 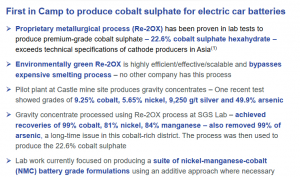 The market may not yet grasp the ultimate potential of this proprietary technology, but I suspect it will soon enough. The technology may be applicable beyond – well beyond – the ores encountered at the Castle mine. It may have some important utility in other industries such as recycling cell and laptop batteries (authors speculation only).

Curiously, the company chose some interesting wording to update Re-2OX…

Canada Cobalt has also been approached by various stakeholders in the district and elsewhere with respect to our Re-2OX process that has produced a premium grade cobalt sulphate product sourced from mineralized material from the Castle mine. Our plan, as the battery sector continues to grow, is to leverage Re-2OX to capture the greatest value possible for shareholders.

Hmmm, that gets the speculative juices going. Capturing ‘the greatest value possible for shareholders’ is not merely a buzzphrase with this company. This team is the real deal.

Stay tuned for assays outta the 1st level of its Castle Mine Project, along with a host of other important developments.

FULL DISCOLSURE: Canada Cobalt Works is an Equity Guru client. We own the stock.