The Castle Mine property is comprised of 19 claims, 34 leases and two licenses of occupation totaling 2,815 hectares.

The historic Castle Mine site operated at various times between 1917 and 1989 producing a historical total of about 300,000 pounds of cobalt and 9 million ounces of silver.

Cobalt is a key ingredient in batteries.  Most major car and cellphone companies are currently getting cobalt from the Democratic Republic of Congo (DRC) – a country with a serious child-labour problem.

For these big companies DRC cobalt is an ethical problem, and a PR problem

A September 12, 2018 Wall Street Journal Report, reminds us that problems in the DRC have not been solved.

On September 13, 2018 CCW announced that the OTC Markets Group has approved the upgrade and listing on the OTCQB Venture Market under the symbol “CCWOF” – effective immediately.

You get the story.

But is this a good time to buy CCW? 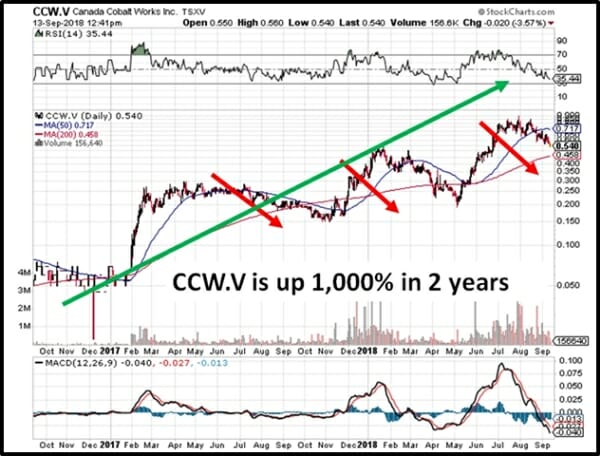 There are two ways of looking at it:

On August 24, 2018 CCW announced that it had intersected visual cobalt mineralization in “most of the 40 drill holes completed to date” covering a distance of 200 meters.

At the same time, surface drilling of high value targets began 1.5 kilometers east of the Castle Mine.

“In addition to continuing to intersect promising vein structures underground, with the latest drilling occurring near the #3 Shaft where there is an impressive network of veins,” stated CCW Mine Supervisor Jacques Monette, “The pilot plant is operating smoothly while we’ve also launched a cost-effective program to dewater the second level of the mine.”

CCW is talking to various stakeholders in the district about its proprietary Re-2OX process that has produced a premium grade cobalt sulphate.

“Our plan, as the battery sector continues to grow, is to leverage Re-2OX to capture the greatest value possible for shareholders,” Monette concluded.

Cobalt, nickel and manganese recoveries from the concentrate using Re-2OX were 99%, 81% and 84%, respectively, while 99% of the arsenic was removed.

“You have to put your money where you want to be standing in a couple of years,” stated Equity Guru’s Chris Parry in recent video interview, “CCW is doing everything it should.”

CCW has a current market cap of $36 million.

Historical production of silver and cobalt on the CCW property would be worth about $170 million at today’s spot prices.  Historical mining methodology involved cast iron hammers and donkeys.

We believe that CCW is in the early days of its growth cycle.

Full Disclosure:  CCW is an Equity Guru marketing client and we own stock.