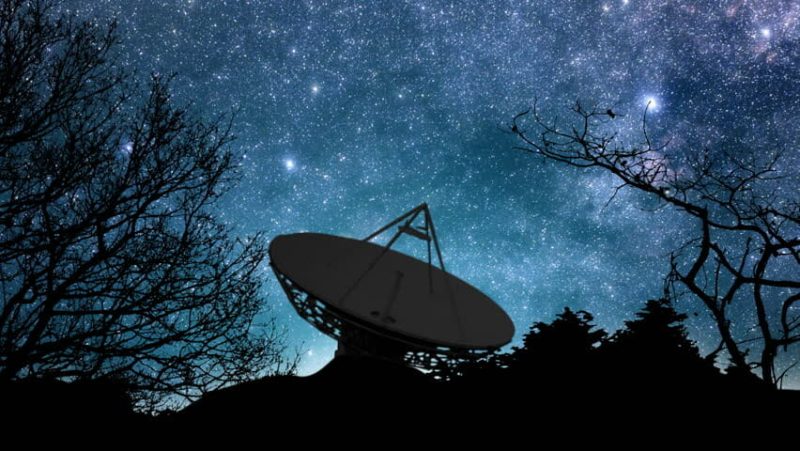 The stars may be aligning for U308 companies. Things appear a little more buoyant than usual in recent days…

Aside from the excitement in the U308 arena, talk among analysts has become far more upbeat lately.

The reason for these heightened spirits…

One week ago, Cameco Corp announced that it will keep its McArthur River/Key Lake operations in the Athabasca Basin suspended for an ‘indeterminate duration’. McArthur River will likely remain offline for several years, until 2021.

You might be thinking, “So the fuck what Diggler… it’s only one freaking mine”. True, but look at it this way: that one mine sports 250M lbs of U308 at a grade of 9.63% (Proven and Probable). That’s a huge amount of supply to deprive the market of at this juncture.

Along with the McArthur River news, recent production cutbacks announced at Kazatomprom, the world’s largest U308 producer, not to mention Paladin Energy putting the kibosh on their Langer Heinrich mine, could set the stage for a (global) uranium deficit going forward. Obviously, such deficits would exert positive pressure on the price of U308.

A current look at the supply demand fundamentals underpinning the U308 market can be found here, on the Cameco Corp website.

If you’re a fan of uranium – if you participated in the U308 bull a decade ago – the McArthur River news should hold your attention.

And if you haven’t already done so, now might be an opportune time to hone your due diligence skills and begin examining some of the better-positioned juniors in the space… those with pounds-in-the-ground. It’s not too late. We’re still in the pre-season ya’ll.

Allow me to make a suggestion…

Blue Sky Uranium (BSK.V) is a well endowed, well positioned explorer/developer with a current market-cap of approximately $16.5M. The company just provided us with a news update on recent activities at its Amarillo Grande Project located in central Rio Negro province, in the Patagonia region of southern Argentina. More on this update in a bit.

First, a quick review of what Blue Sky’s got…

The company is in the process of defining a low-cost, regional-size U308/V2O5 producing district having made the largest uranium discovery in Argentina in the last 40 years. The company also boasts a substantial vanadium (V2O5) kicker.

A good review of the company’s U308 asset can be found here.

Some very decent offerings on the subject of both assets – uranium and vanadium – can be found here, here, and here.

What these types of deposits lack in depth is more than made up for in lateral scale.

Yes, Ivana’s ore is low-grade, but here’s the thing: This shallow U308/V2O5 mineralization is hosted in loosely consolidated sediments. The metals are not bonded or locked into the surrounding rock. The ore breaks apart. Easily. In some cases, it crumbles with only slight pressure. I cannot stress enough how important this feature is to the potential economics of a project.

Importantly, the company reported back in May that this U308 and V2O5 mineralization can be concentrated by simple wet scrubbing and wet screening. This critical test demonstrated that they can upgrade their metal concentration by approximately 300% for uranium and 250% for vanadium.

Once again, this is a huge benefit and should translate into enhanced project economics. More on this below. 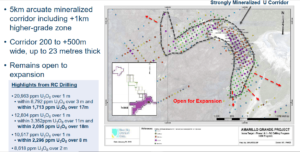 Multiple uranium occurrences spread out across the region qualify this area as a ‘trend’, one which measures some 145 kilometers in length by 50 kilometers in width. 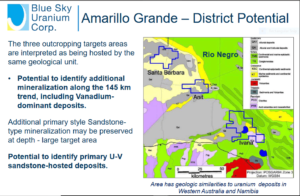 One gets a sense that the company may only be scratching the surface here. Note the scale on the above map.

This is the part I like: the fact that the mineralization lies at surface in loosely consolidated sediments – metals which can be concentrated by a simple scrub and screen process – opens up the possibility of a central processing facility… 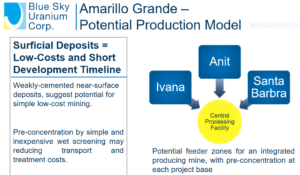 These types of deposits all boil down to economics. A central processing facility, one which concentrates the ore onsite, will have a HUGE impact on the company’s bottom line if (when) Amarillo Grande gets the green light for production.

The company plans on releasing its much anticipated Preliminary Economic Assessment (PEA) on Amarillo Grande by year-end. This will give us an indication of how well the deposit will fare under current U308 and V2O5 prices. If my suspicions are right, the preliminary economics should prove quite compelling.

From the above release, recent and upcoming work programs include:

PEA for the Ivana deposit

Under the guidance of the Company’s Technical Advisor, Chuck Edwards, a new representative composite sample of uranium-vanadium mineralized material from the Ivana deposit has been made and submitted to The Saskatchewan Research Council (SRC) for mineralogical, metallurgical and process engineering work. SRC is one of Canada’s leading providers of applied research, development and demonstration (RD&D) and technology commercialization, including specific expertise in uranium. With over 71 years of RD&D experience, SRC provides products and services to its 1,500 clients in 20 countries around the world. SRC is an ISO 9001:2015 certified company.

The objectives of the work at SRC include confirming the balance of uranium and vanadium in the ore preparation, and optimizing the leach extraction rate and recovery. The work will include QEMSCAN® quantitative mineralogy testing and customized leach experiments. Preliminary QEMSCAN® mineralogy was conducted in June and has aided in the design of the current metallurgical and process testing. Results from the program will be used to design the flowsheet which will be incorporated into the PEA.

Coincident with the PEA work, Blue Sky continues to explore proximal to the Ivana deposit in order to expand resources, under the direction of Guillermo Pensado, Vice President, Exploration & Development for Blue Sky. To date, the Company has completed 425.5 metres of shallow auger drilling in 110 holes to test for extensions to the Ivana deposit;  Radiometric probe results from the current program are being processed and will be reported in the near future. In addition, the Company is planning a 1,000+metre step-out drill program around the Ivana deposit, which is expected to commence in mid-August, to follow-up on the auger drilling program.

Commenting on the current state of the U308 market and the company’s progress in advancing Amarillo Grande to the PEA stage, Nikolaos Cacos, Blue Sky President & CEO, stated…

The recent announcement from Cameco to suspend production at the McArthur River mine reflects the current supply-demand imbalance conditions for uranium, but we believe it will achieve its goal of supporting the return to a sustainable uranium market. We continue with our strategy to advance our exploration and PEA program work at Amarillo Grande so that we are positioned to capitalize on that return for our shareholders.

I really appreciate that CEO Cacos is busy testing for extensions of the Ivana deposit. We have a fair number of assays coming down the pike that could increase the size of the current resource, perhaps substantially. Don’t forget, this deposit starts right at surface – 425.5 meters in 110 auger holes represents a substantial volume of assay data.

I was around during the last real bull market we had in uranium. It was a wild and profitable ride.

There were more U308 companies back then than there are today. Fewer companies to sift through makes shortlisting potential buy-candidates a little easier. The key to success here, obviously, is identifying the most undervalued company offering the greatest leverage in a rising U308 market.

As noted earlier, Amarillo Grande has district scale potential. The likelihood of identifying additional
mineralized zones along the company’s 145 km trend has to be considered excellent.

There are a number of potential price catalysts going forward: the PEA, regional exploration news, Ivana step-out drilling, high-priority drill target testing… There’s also the distinct possibility of higher U308 prices in the weeks and months to come.

Full disclosure: Blue Sky is an Equity Guru client, we own the stock.