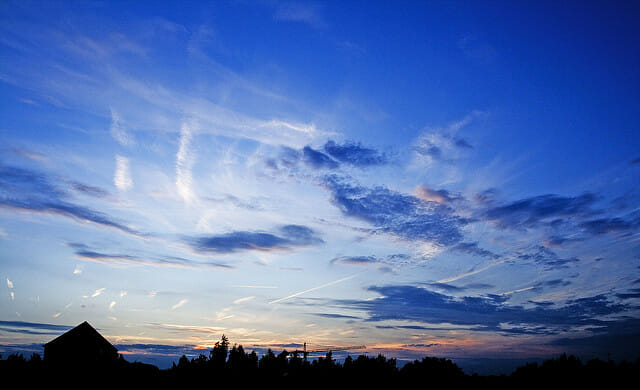 Mineral exploration is full of highs and lows, twists and turns, victories and defeats. A geologist can spend his or her entire career scouring countless miles of prospective terrain attempting to zero in on an economic orebody. Some never find it.

Some find it in multiples…

The group behind Blue Sky Uranium (BSK.V) boast the discovery of not one but three multi-million ounce precious metal success stories. That’s a phenomenal track record. Argentina has been very good to Joseph Grosso and co.

The company tabled a significant resource at their Ivana project approximately five weeks ago. As you can see from the chart below there are two different types of mineralization here: Uranium aka ‘Yellow Cake’ aka  U308… and Vanadium. 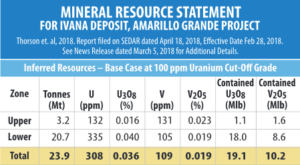 Yes, the grades are low, but this mineralization might be a cherry pick.

Some exploration companies need to drill continuously, launching one costly campaign after another in order to build a meaningful resource. Blue Sky Uranium (BSK.V) is in the enviable position of having their resource right at surface, spread out across a flat barren landscape. Theirs is what’s called a surficial deposit.

The mineralization at Ivana is found within a few meters of the surface. But what these deposits lack in depth, they more than make up for in horizontal scale.

As you can see from the above map, the extent of the mineralized surficial zone is vast. It’s also open in multiple directions, meaning… there’s likely a lot more in store. In fact, the trend they are exploring encompasses some 140 kilometers in length by 50 kilometers in width. What makes this massive area a ‘trend’? Multiple uranium occurrences spread out across the region.

We’ll deal with its U308 resource first, seeing as how this is what the company was first looking for when it put boots to the ground back in 2006.

And what a price chart (try not to let it mess with your head).

The most significant speculative buying in the U308 market occurred in 2007, followed by a similar, albeit less frenzied binge in 2010.

This is one helluva market to characterize. A series of shocks, some relating to the destructive forces of nature – the Fukushima Daiichi disaster immediately comes to mind – have really screwed with the supply-demand curve.

The U308 market has been in a state of oversupply for years. Producers worldwide have been, for the most part, operating at a loss. In order to restore balance to the situation, some of the larger producers began curtailing production.

Cameco Corporation (CCO.T) for example, slashed their output by half eight months ago. That move alone hacked 12% off of global production.

These production cuts will undoubtedly gnaw away at the supply bubble. Meanwhile, demand for U308 remains firm…

Despite the crosscurrents in the present U308 market, the situation in Argentina is a compelling one for the company.

The country has a long history with nuclear energy. Its first commercial nuclear power reactor began operating in 1974. Supporting factors include:

Having embraced the Paris Agreement on climate change, expanding their nuclear power program will help the country meet its obligations.

Argentina has an appetite for U308. With the planned construction of two additional reactors, a domestic source of U308 would be a most welcome resource to facilitate that need. This is where Blue Sky’s Ivana deposit fits in.

Blue Sky has IT too… 10.2 million pounds worth.

The sleuths here at Equity Guru like Vanadium. They believe Canadian based companies sitting on significant Vanadium resources are about to make a move. I gotta bet they’re right.

Vanadium’s malleable, tensile and corrosion-resistant qualities make it an extremely versatile metal. It’s used as a strengthening agent in steel. It improves the quality of the steel rebar that’s used to re-enforce concrete, giving newly constructed buildings a better shot at withstanding the shock of a major earthquake.

On the subject of ‘rebar’, Equity Guru’s Lukas Kane recently brought to light a situation in China that could push Vanadium prices significantly higher. A great bit of sleuthing, this…

This steel-blue metal is also used in the production of Vanadium redox flow storage batteries.

Regarding this important new breakthrough in battery technology, serially successful mine discoverer, developer and promoter, Robert Friedland, recently stated that large-scale deployment of this new technology…

…will result in vanadium flow batteries revolutionizing modern electricity grids in the way that lithium-ion batteries are enabling the global transition to electric vehicles.

Friedland added greater detail in this next quote, stating…

News that China is building a 200 MW vanadium redox flow complex on the Dalian peninsula adds depth to the Vanadium story. This ambitious project, one which will accommodate seven million residents, pounds home the import of this new technology.

The metal is currently in a supply deficit. China, Russia and South Africa make up the lions share of production, some 80%. Argentina may soon be added to the mix.

The shallow U308 and Vanadium mineralization at their Ivana deposit in Argentina is hosted in loosely consolidated sediments. This means that the metals are not bonded or locked into the surrounding rock. It breaks apart fairly easily. In some cases, it crumbles with little pressure. 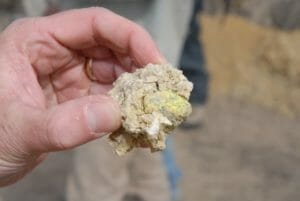 The company reported that their Uranium and Vanadium can be concentrated by a process of simple wet scrubbing followed by wet screening. The tests demonstrate that they can upgrade their metal concentration by approximately 300% for Uranium and 250% for Vanadium.

This is very good news. Concentrating the U308 and Vanadium ONSITE at a central processing facility, from multiple sources, will effectively slash their operating costs. 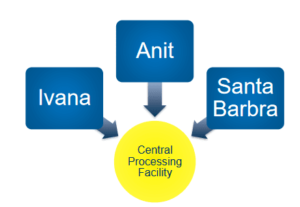 The ability to efficiently concentrate both the uranium and vanadium represents key strategic factor for developing a low-cost flowsheet for surficial mineralization that is widespread at Amarillo Grande. These very positive results further support our view that we are on the right path to developing a beneficiation and processing framework to support a low-cost uranium-vanadium mining project.

If Blue Sky’s Ivana Project resource held only U308, I’d still find it compelling. I’ve witnessed a U308 bull market. I know the feeling having been turned away at the door only moments after a U308 PP (private placement) was announced. I’ve watched U308 stocks rocket higher, leaving my unfilled buy-orders choking in the exhaust.

I suspect we’ll witness another frenzied uranium bull in the not-too-distant future.

Blue Sky’s Vanadium asset makes this $11.5 market-cap company even more compelling. The canny folks here at Equity Guru believe Vanadium stocks are the place to be currently. With 10.2 million pounds of Vanadium lying just beneath the surface, BSK should be considered for purchase if you’re looking for exposure to this rapidly developing market.

U308 vehicles anyone? Lap the planet several times over on a single fuel rod?? 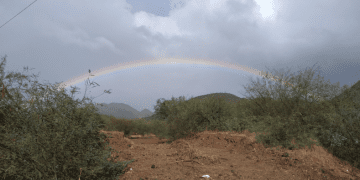 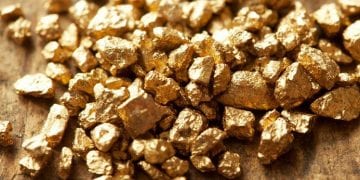