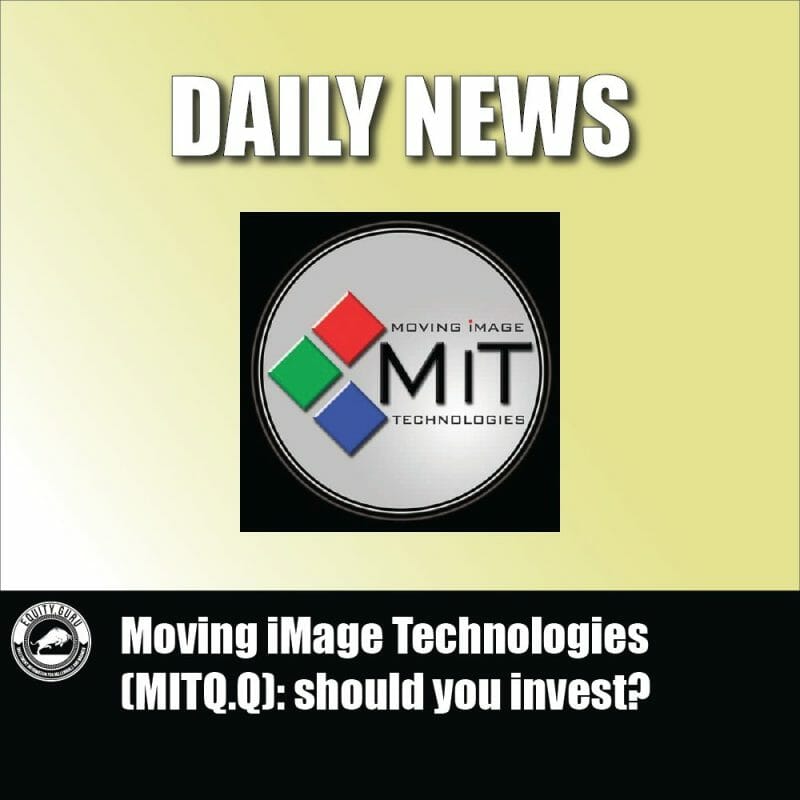 When I was little, my dad would often take my siblings and me to movies we definitely weren’t old enough to see. Whether it was Borat or Final Destination, you can bet your bottom dollar I left the cinema traumatized. Very nice! Around this time, the early 2000s for reference, Hollywood had begun capturing films digitally. That being said, I can still remember a few times when the film used by the cinema was damaged.

Historically, 35 mm film was used to capture motion picture films. For context, motion picture films are made from a series of images on film, projected in rapid succession onto a screen via light. With this in mind, if one or a few of these images were damaged, it could result in visual distortions like artifacts. Click here for an example! However, the days of traditional film have long since passed, with digitally shot films overtaking celluloid films around 2013. 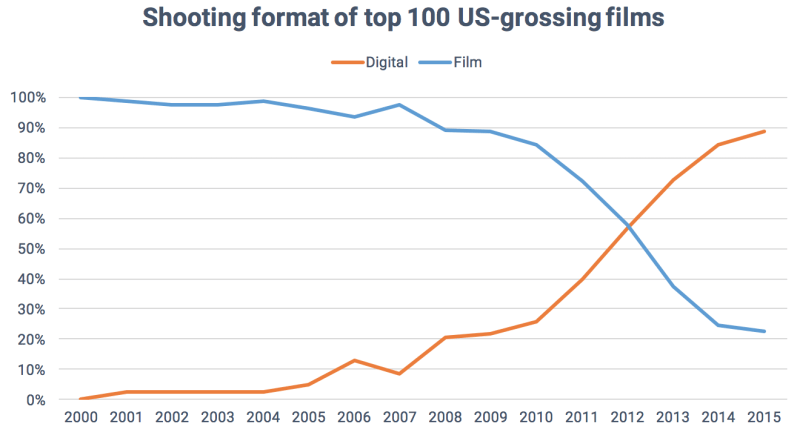 In terms of performance, the entertainment industry as a whole took quite a beating following the onset of the COVID-19 pandemic. According to the Motion Picture Association’s (MPA) 2020 THEME report, in 2020 the entire global theatrical, home, and mobile entertainment market totaled $80.8 billion, the lowest figure since 2016, representing a decline of 18% from 2019.

However, it’s not all bad news for the entertainment industry. According to Ben Swinburne, head of Morgan Stanley’s US Media Research Group, 70% of the companies in this sector could see 10% or higher revenue growth this year. Narrowing our scope a bit, the motion picture industry is expected to reach a value of $43.960 billion by 2027, expanding at a compound annual growth rate (CAGR) of 8.3% from 2021 to 2027. 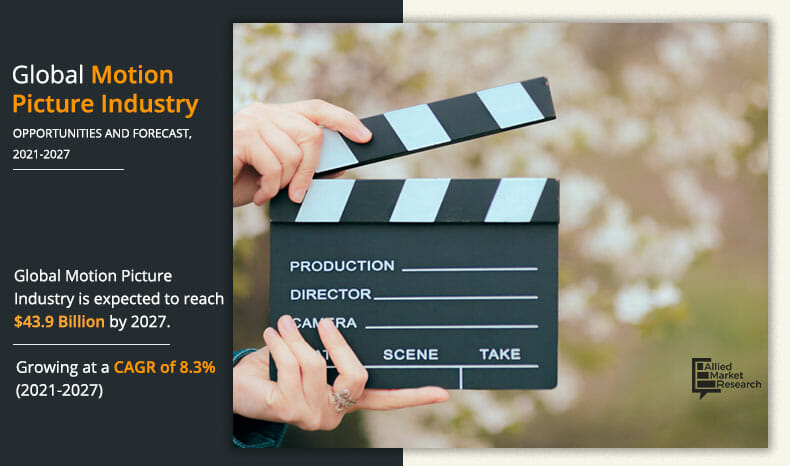 China, India, and Southeast Asian countries are currently outperforming the average growth expected for the global entertainment industry, which continues to grow steadily. Closer to home, the MPA’s 2021 THEME report found that in 2021, an estimated 943 films were in production, which is more than double from 443 films in 2020. Furthermore, the number of theatrically released films in 2021 was 387, compared to 338 in 2020.

Now, let’s talk about a company with a foothold in the entertainment industry, specifically the Motion Picture Exhibition industry. To provide some background, the Motion Picture Exhibition industry is defined as an industry comprising establishments primarily engaged in exhibiting motion pictures. These establishments are mostly engaged in providing motion picture exhibition services, such as those provided during film festivals. 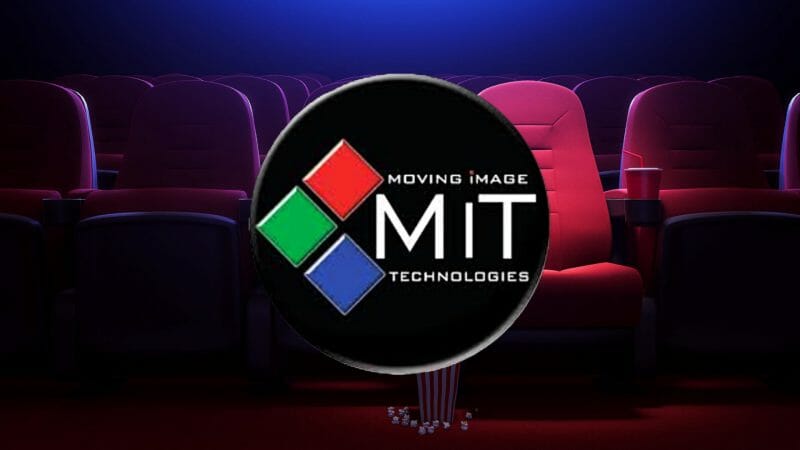 Moving iMage Technologies (MITQ.Q) is a manufacturer of standard and custom-designed equipment and a high-level distributor of technology and equipment to the Motion Picture Exhibition industry. Based in Fountain Valley California, the Company’s 28,000 sq ft facility houses its corporate offices, engineering and manufacturing, distribution, and integration, as well as MiT’s support division. The Company’s facility is supported by a global network of service partners and OEM manufacturers.

MiT sells a variety of proprietary products, which are designed and manufactured in-house. This includes the Company’s Caddy brand of proprietary products, a leading provider of cup holders, trays, and other products to entertainment and sports venues. Don’t get it twisted, MiT offers a lot more than just cupholders. In fact, the Company offers a wide range of products and services, including:

In layman’s terms, the GDC SR-1000 provides a variety of benefits including playback of thousands of movies, diskless CineCache built-in cache memory, and superior reliability supported by embedded power electronics used in medical and military products. On the other hand, MiT’s Dolby IMS3000 offers cost-effectiveness and reliable performance, backed by Dolby’s industry-leading technology.

Now, let’s talk about the main reason I am writing about MiT. On April 21, 2022, the Company announced a strategic partnership with SNDBX to bring the full theater experience to the gaming and eSports market. For context, SNDBX promotes, creates, and manages gaming and eSports leagues for amateur gamers by partnering with local movie theater operators. In doing so, SNDBX is able to use theater auditoriums to host weekly events. 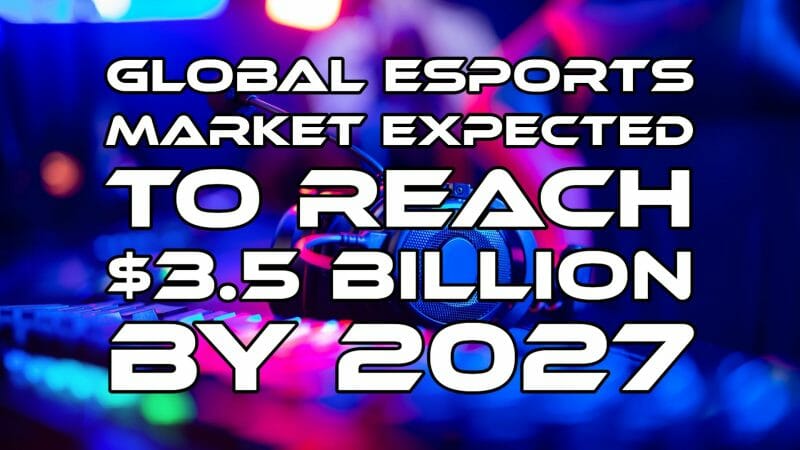 More specifically, MiT will be responsible for creating custom-made portable gaming carts that integrate PCs or gaming consoles, accessories, IP switches, and other proprietary MiT technologies that can be moved between auditoriums within a cinema. Additionally, MiT and SNDBX will cooperate on business development initiatives regarding the introduction of eSports and competitive amateur gaming to the local cinema experience.

“Our custom-made, integrated mobile cart is the only product available of this nature and will allow SNDBX to quickly deploy competitive e-Sports technology in support of its cinema strategy. By offering theater operators the opportunity to monetize their excess auditorium capacity and increase concession sales, SNDBX is providing a win-win value proposition,” continued Frank Tees.

This will enable theater operators to utilize excess capacity and expand concession sales and profitability. If you would like to know more about this development, MiT and SNDBX will demonstrate the new mobile gaming cart at CinemaCon in Las Vegas from April 25-28, 2022, at Booth 2203A in Augusta Ballroom. Overall, this is a significant development for MiT, providing the Company with a foot in the lucrative eSports market, which will likely generate $2 billion in revenue for 2022. 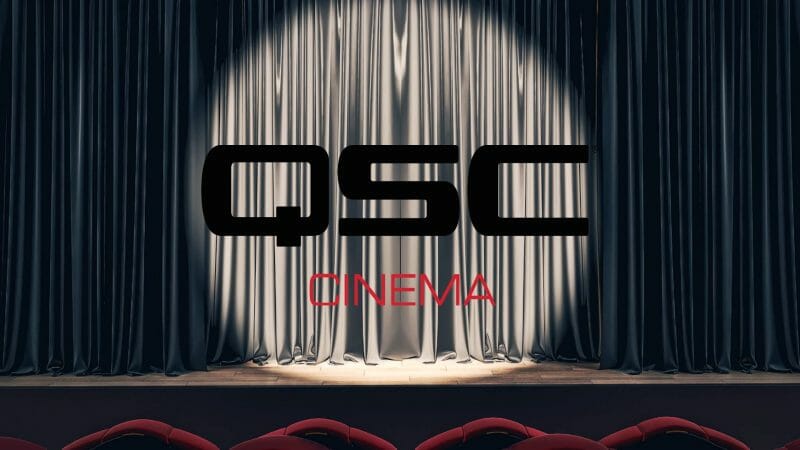 QSC’s USL line of accessibility products includes infrared-based assistive listening and closed caption (CC) devices for cinema patrons. With this in mind, MiT’s portfolio has now been expanded to include products that are compliant with the Americans with Disabilities Act Standards for Accessible Design (ADA). Keep in mind, ADA products are a requirement for all movie theaters in the US.

“In the coming months, we will release our disruptive proprietary technology and subscription service called the MiTranslator, an offering which will allow moviegoers to enjoy movies in their native language through a pair of AR glasses,” commented Joe Delgado, Executive Vice President of Sales and Marketing at MiT.

Having now acquired QSC’s USL products, MiT is capable of addressing an underserved population of 70 million non-English speakers in the US. Ultimately, the last 24 hours have been absolutely transformative for MiT, with the Company’s shares skyrocketing 34.8% following its strategic partnership with SNDBX. MiT has gained some impressive momentum and shows no signs of slowing down.

Today alone, the Company has traded over 71,087,494 shares, suggesting that now is as good a time as any to invest in a company with a foot in digital cinema and now eSports. Furthermore, MiT’s upcoming MiTranslator could serve as another boon for the Company. Without looking at MiT’s financials, it’s hard to say whether or not the Company is worth investing in, however, MiT looks quite promising. 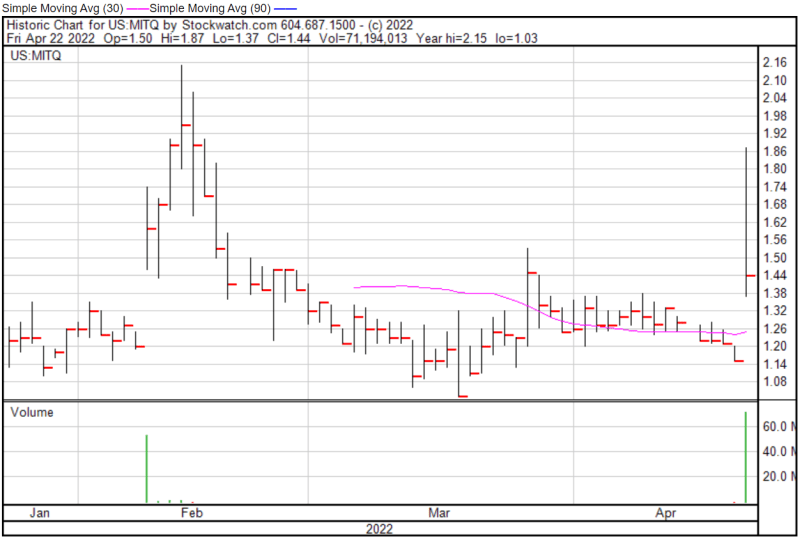