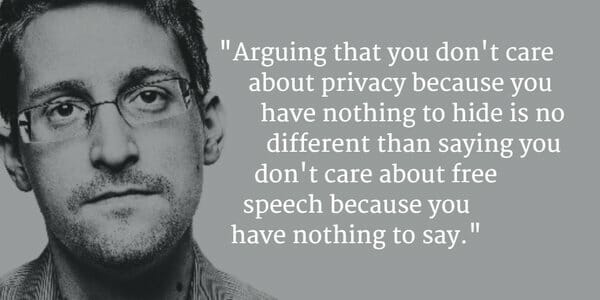 The Cryptocurrency Guide for the Perplexed: The Case Against Privacy Pt 2

Late last week I wrote a little something on privacy and why we need it. That was intended to be a much larger piece—the second half of which would show the other side, lay out the counterarguments from both the perspective of cryptocurrency, but also veer into wider privacy related territory.

Especially in view of the impending regulations on cryptocurrency.

So if you’re coming in on this piece first, then you might want to stop and go read the earlier piece first, because this one may not make a lot of sense without it. Go on. We’ll wait. Done? Good.

At the core of it is the tug of war philosophical argument between security and privacy. We’re trying out a little dialectic poison here and maybe we can figure out a little something about the future of crypto through this analysis.

Now let’s get into it.

It’s not fake news that privacy coins like Monero show up regularly in dark web virtual raids. They’re the coin of choice for in-the-know criminals and their organizations because of the underlying technology. It effectively covers its own tracks, ensuring that nobody can see any details of the transaction, including buyer and seller, product, price and the transaction itself, unless both parties agree.

It’s why the currency shows up on large darknet markets beside Bitcoin. Now out of an abundance of caution, Coinbase and plenty of other exchanges don’t offer Monero transactions. They know regulations are coming and they want no part of anything that’s going to sully their reputations. And it’s not like the regulators themselves haven’t taken notice of Monero, either. The Internal Revenue Service (IRS) has put a bounty of up to $625,000 for anyone who can break through its privacy coding.

Authorities say its because of the coins’ complicity in funding terrorism and human trafficking as well as other crimes, as their justifications for shutdowns and bans.

The curious point is that Monero is still the number two coin for all dark and deep web activities. The first coin that regularly shows up when criminals buy illicit and nasty shit off the deep web is still Bitcoin. It’s almost like they want to get caught.

Why are they going to get caught? Because Bitcoin is transparent to those who know the tech and that brings us too…

There’s an adage that states ‘sunlight is the best disinfectant.’ It’s the whole notion that a complete revelation, with complete transparency and a ‘coming clean’ about activities best left hidden is enough to eliminate the prospect of corruption.

A corollary to this is the nature of transparency, especially as it pertains to the blockchain.

The blockchain is immutable, and immutability plays into the idea of perfect provenance. That means anything that’s placed on the blockchain stays on the blockchain from that moment on. Or to put it another way—any illegal transaction or behaviour that takes place on block 31324 will be evident on every single block for the rest of time. Once the crime is discovered, one only has to peer back in the blockchain to find where the crime occurred, and then act accordingly. The prospect of eventually getting caught and punished is the biggest deterrent to antisocial behaviour.

If the panopticon invokes the spirit of game theory, and specifically iterated prisoner’s dilemma, then the blockchain ensures that even if you cheat this game, you will get caught later because the blockchain does not forget.

It’s one of the biggest selling points of the technology—especially given the hidden, sneaky behaviour of governments, bankers and everyone else in charge of our economic lives. Unless, of course, they’re the ones running the blockchains and then things can get dicey.

Regardless, there’s another strong reason why we’re losing our privacy, and that’s because people are busy. I hesitate to say lazy here because we’re not. But we have to prioritize the important parts of our lives, and there’s a strong probability that we don’t recognize how truly important our privacy is.

If there’s anything to be learned from the history of computing, and specifically the history of encrypted hypertext protocol specifically, is that nobody is going to adopt a technology if its inconvenient. People will choose privacy when it’s easy.

Website connections were all in plaintext once upon at ime and HTTPS was only used on sites that handled credit cards and banking data, because it was slow and annoying. When computational costs made it so HTTPS was cheap and easy to use, it became the default, so websites could use it without users noticing or caring.

Something similar happened to WhatsApp, the largest End-to-end encrypted service, without ever consulting users. They turned on E2E encryption in 2016 and nobody noticed or cared.

All of this belies an uncomfortable truth about privacy, though. The evidence suggests that people just don’t care about their privacy. People use social media apps to openly sell data to third parties. They’ll whip out their Venmo or PayPal and broadcast their payments on social media. They use SMS, which is stored in unencrypted plaintext and can be subject to subpoena by law enforcement—while they have the option of WhatsApp, Signal or Telegram.

The suggestion is that we have two types of people here. The type of person who isn’t entirely serious about privacy, but would rather their neighbours, spouses and friends not know what they’re doing. For them, blockchains like Bitcoin and Ethereum fit the bill. Unless you’re sufficiently tech savvy, you’re not going to be able to penetrate the encryption and decipher any activities on those blockchains. This is the majority of the population.

The second half are the privacy-conscious people who want strong privacy controls to protect themselves against government, corporations and tech savvy neighbours and scammers. For these folks, there’s Monero and Onion routing and crypto-centric virtual private network (VPNs) and the Brave browser.

When used correctly these are strong enough to keep out anyone you don’t want seeing your data. That comes at a price in both time, energy and money. Few folks are willing to part with the time and energy required to actually learn not only the whys of privacy protection, but the hows. Until the cost of privacy decreases in these three categories—the why, the how and the money involved—we shouldn’t expect to see any transformations in crypto anytime soon.

Finally, the point rounds in on itself.

Everyone is interconnected and it may not even be possible for an individual to opt out of being tracked and targeted anymore. For example, Facebook builds alternative profiles of people, even if they don’t have Facebook accounts, based on data acquired from their contacts. If someone uploads a picture of someone that’s not on facebook, you can’t stop your face from finding its way to a facial recognition database without your consent. Oh, and it’s not just Facebook either. You can expect the same from Twitter and Amazon.

At the time of writing there’s been no news about Biden’s executive order, and even when there is we won’t see information come back for some time, so we have plenty of room to speculate on what our blockchain future is going to look like. My suspicions are that folks are going to return to Biden with information about Monero, about Bitcoin, about the Dark Web, and maybe information about above-board exchanges.

And about the blockchain. That last point is the most worrisome. The United States government is already kicking around the idea of a central-bank backed digital currency (CBDC). They’ll have to be a touch more circumspect in its implementation than China was with their Digital Yuan. China skips right on past the idea of persuading its public and goes straight to coercion and force, but the effect is the same—compliance and complicity by any means necessary.

Recently, a Republican has spoke up against such a blatant and obvious power grab, suggesting we may all be living in the upside-down.

Here’s a quote from Minnesota representative about CBDCs.

“Requiring users to open up an account at the Fed to access a U.S. CBDC would put the Fed on an insidious path akin to China’s digital authoritarianism. It is important to note that the Fed does not, and should not, have the authority to offer retail bank accounts. Regardless, any CBDC implemented by the Fed must be open, permissionless, and private. This means that any digital dollar must be accessible to all, transact on a blockchain that is transparent to all, and maintain the privacy elements of cash,” said Congressman Tom Emmer.

But he’s not wrong. The only question left to ponder – is of course – since when does a politician actually work to responsibly stall his own party from gaining absolute financial control over every living soul?