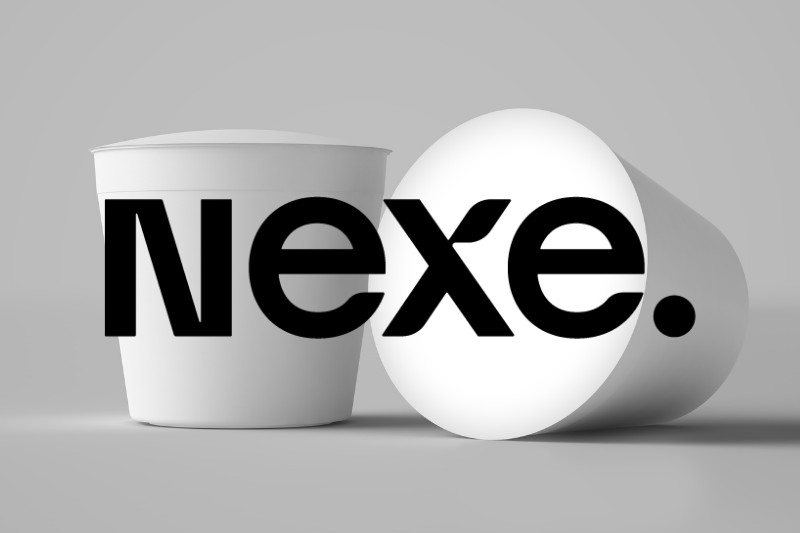 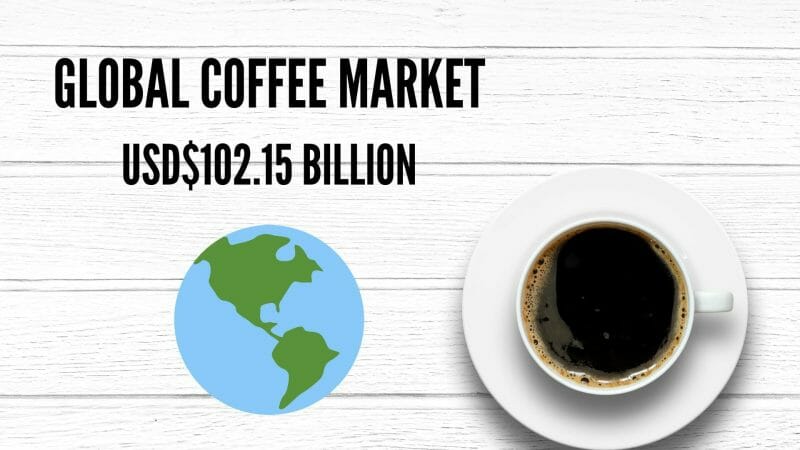 I have a love-hate relationship with coffee. As a teen, I would drink Tim Horton’s French Vanilla coffee like it was water. However, the last French Vanilla I ordered had me throwing up in my high school’s bathroom for over an hour. Needless to say, I have avoided drinking coffee since then. That is until I bought a Keurig to help fuel my caffeine addiction in university. Whether it was the convenience of being able to make my own coffee or the variety of flavours to choose from, ordering coffee just couldn’t compare.

That being said, it looks like millions of others share the same sentiment. According to Market Watch, there were approximately 121 million households in the United States (US) in 2015. Of these households, 20 million, or 16%, possessed a Keurig machine. Matthew Grainger at Morgan Stanley, an American multinational investment bank and financial services company, estimated that Keurig coffee makers would be in 25% of households in 2020, contributing to 10% of annual sales growth in the next several years.

Sounds great, right? Wrong. When it comes to environmental sustainability, coffee pods are one of the best examples of unnecessary single-use plastics that are polluting our planet. Many end up getting incinerated, dumping poison into our air, water, and soil. Furthermore, coffee pods can end up in rivers where they wash into lakes and oceans. As a result, these coffee pods break down into smaller pieces of plastic, which end up choking and killing wildlife.

In fact, less than 9% of coffee pods are actually recycled, with an astonishing 79% ending up in our land and oceans. To make matters worse, it can take anywhere between 500 and 10,000 years for plastic pods to break down in the environment. Despite this, more than 365 tons of plastic are produced year-over-year (YOY). That being said, more than 56 billion coffee pods are discarded to landfills every year, which equates to more than 100,000 pods per minute. So what’s the solution? 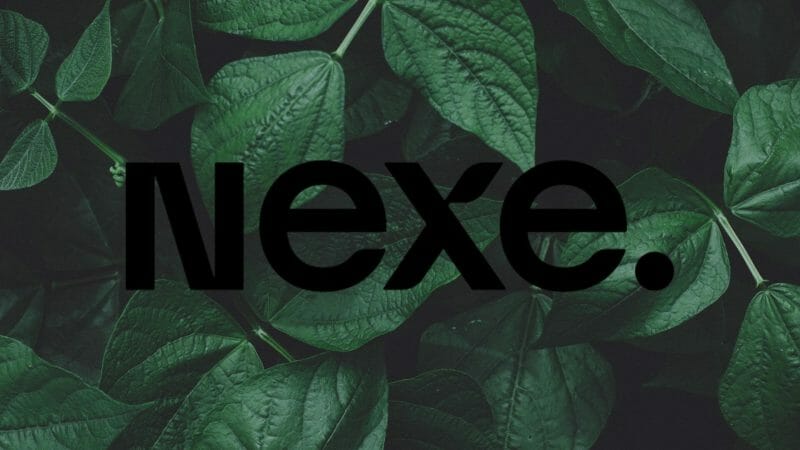 NEXE Innovations Inc. (NEXE.V) is a leader in plant-based compostable technology and an advanced materials manufacturer based in British Columbia (BC), Canada. In order to combat this plastic predicament, NEXE has developed one of the only patented, fully-compostable, plant-based, single-serve coffee pods for use in leading single-serve coffee machines, including Keurig coffee makers. The Company’s proprietary NEXE Pods are designed to reduce the significant environmental impact caused by single-serve pods.

With this in mind, NEXE has raised over $60 million from equity and government funding. Additionally, the Company has more than six years of R&D experience. As a result, the Company is well-positioned to capitalize on the lucrative Global Coffee Market, which was valued at USD$102.15 billion in 2019. Fueled by caffeine addicts like myself, this market is expected to reach a valuation of USD$155.64 billion by 2026, expanding at a compound annual growth rate (CAGR) of 6.2% between 2020 and 2026.

In particular, the US At-home Coffee Market was projected to grow by 4.9% in 2020, to reach $15.6 billion compared to a total of 3.9% growth experienced between 2015 and 2019. More specifically, the Global Coffee Pod and Capsule Market alone is expected to reach USD$29.2 billion by 2025. Unsurprisingly, 44% of the US coffee demand comes from Millennials, with their grande half-caff vanilla frappucinos and avocado toast. As much as I like to make fun of them, Gen Z and Millennials are two of the most environmentally conscious generations.

According to Nielsen, 75% of Millennials are eco-conscious to the point of changing their buying habits to favour environmentally friendly products. Furthermore, despite being too broke to afford a house, a vast majority are willing to pay more for eco-friendly products versus their cheaper competitors. I never thought I would be proud to be a Millenial. With this in mind, creating a compostable coffee pod is no easy task. There are several barriers to consider such as: 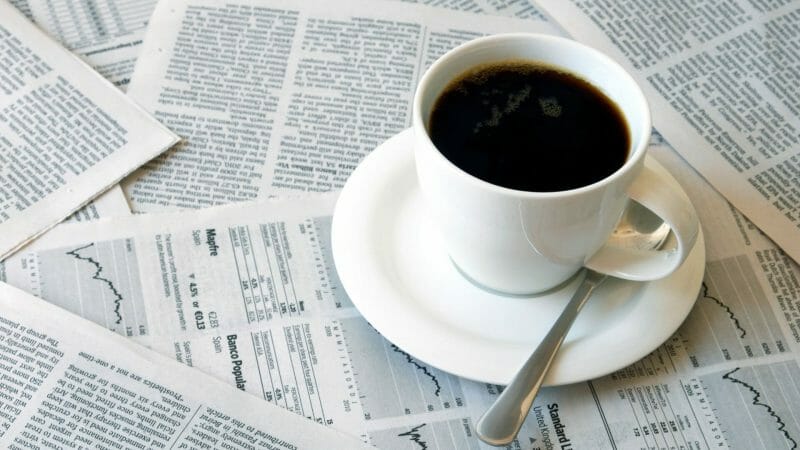 Against all odds, NEXE has succeeded in developing a plant-based, fully compostable, zero waste coffee pod that is easily identifiable as compostable by waste workers. In addition to being compatible with all Keurig brewing systems, NEXE Pods are able to hold more volume than traditional K-Cups. Furthermore, NEXE Pods can achieve compostability in as little as 35 days in a municipal composting facility. That’s approximately the same amount of time it takes for an apple core to decompose. So, what has NEXE been up to lately?

On November 1, 2021, NEXE announced that its coffee pods, using the Company’s proprietary filter system, were now available to purchase at nexecoffee.com. As previously mentioned, NEXE Pods are fully-compostable, plant-based, and are compatible with Keurig’s single-serve brewing system. However, NEXE Pods are also compatible with Nespresso® OriginalLine brewing machines, presenting another huge market opportunity for the Company in addition to Keurig. The Company announced that it would be launching its Nespresso® compatible pods in the US and Canada on July 29, 2021, marking the first NEXE-branded coffee product in the single-serve coffee pod market.

Most recently, on November 3, 2021, NEXE announced that it has completed its Factory Acceptance Test (FAT) for its assembly, filter form, and dosing automation. The successful test was finalized on October 26, 2021, at the Company’s manufacturing partner’s facility in Europe. This represents the first of two custom machines that were ordered by NEXE in February 2020. The Company anticipates that this piece of equipment should arrive this month at NEXE’s headquarters in Vancouver, followed up with a Site Acceptable Test (SAT). NEXE expects this equipment to be fully commissioned within two weeks of a successful SAT.

“The FAT results prove that NEXE is able to consistently produce our pods at a high rate while maintaining the performance and taste profile that our customers demand from a superior pod. This means that we will be able to continuously produce our pods without losing the integrity of the product up to a capacity of at least 50 million pods per year,” commented Ash Guglani, NEXE’s President and Director.

As of August 31, 2021, NEXE had 96,737,974 issued and outstanding common shares. During the three months ended August 31, 2021, the Company issued 50,000 common shares from the exercise of warrants for proceeds of $50,000, and 34,300 common shares for the exercise of options for proceeds of $22,295. Additionally, the Company issued 25,000 common shares at a deemed market price of $1.02 to a former employee of the Company, who met a performance-related milestone in accordance with an employment agreement as a Shares for Services transaction, as defined in the policies of the TSX Venture Exchange. The shares are subject to a four-month hold period from the date of issue and the share issuance was part of a final settlement.

Certain equipment is expected to be delivered in calendar Q4 2021 with remaining payments due on delivery. The bulk of the equipment (coffee capsule dosing and sealing machines) is from a European manufacturer and the Company is working towards an exclusive agreement for long-lead equipment with expected delivery over the next 24 months.

Equity Guru had the privilege of communicating directly with Ash Guglani, NEXE’s President and Director. When asked how NEXE’s latest news would affect the Company’s revenue position, Mr. Guglani commented:

“The first product that we launched, was our XOMA Superfoods line in H1 2021. Secondly, we recently launched our pods that are compatible with Nespresso® OriginalLine brewing systems. Finally, we just launched our pods for Keurig® single-serve brewing systems. Our fully-compostable and proprietary format Keurig® and Nespresso® OriginalLine pods address a sizable portion of the growing potential 60 billion per year coffee pod market.”

With this in mind, we also asked Mr. Guglani if NEXE’s Keurig compatible pods would transition the Company out of the development stage, to which he responded:

“We are now out of the development phase for each of these products and are in revenue. As we head into the calendar year 2022, we will not only be selling our pods via nexecoffee.com and Amazon.com/.ca but will also be selling into physical retailers, initially, in North America…with more large scale coffee brands and consumer packaged goods (CPG) focused on sustainable packaging, we could potentially begin picking up large scale contracts that could get us onto several more shelves and storefronts across North America. Because sustainability has become a worldwide phenomenon, we could become a global product and brand as a result of a contract(s) with a well-known international CPG player.”

That being said, Mr. Guglani expressed that NEXE has already been approached by several well-known CPG companies about addressing various packaging formats. He also reminded us that NEXE is a platform for developing sustainable products, primarily for the CPG sector. When asked if NEXE would consider developing other forms of plant-based packaging, Mr. Guglani commented:

“Our strategy is to identify what would be some of the low-hanging fruit that we can apply our years of R&D and know-how to and work with partners to develop these products with them. Our experience in developing coffee pods has provided us with the expertise to understand how to consistently produce an item that can withstand heat, pressure, and deliver the taste and aroma that our customers expect from a superior coffee pod. Developing and delivering coffee pods has enabled us to take product development knowledge and apply it to other high-volume packaging products. Our revenue model from these opportunities would most likely be in the form of ongoing royalty and part of a licensing strategy with our partners.”

In conclusion, after years of R&D and capital raises, NEXE has demonstrated that it has delivered on its vision to create fully-compostable pods for Keurig brewing systems. Together with Nespresso OriginalLine® coffee makers, NEXE has created pods for two of the most popular formats. Furthermore, the Company has more than $45 million in the bank, has purchased critical equipment, and recently made some substantial hires to assist the Company in commercializing its pods.

Bearing all of this in mind, Mr. Guglani believes that NEXE is well-positioned to take advantage of the world’s focus on sustainable packaging. Looking forward, NEXE will focus on driving sales for its coffee pods, however, Mr. Guglani concluded by stating, “we look forward to introducing additional products focused on sustainability to the market in the near future.” If you ask me, NEXE is about to undergo some serious changes. The Company now has an additional revenue stream through its Keurig compostable pods. Furthermore, NEXE intends to expand into the physical retail scene, providing the Company with an entirely new demographic of consumers to capitalize on. 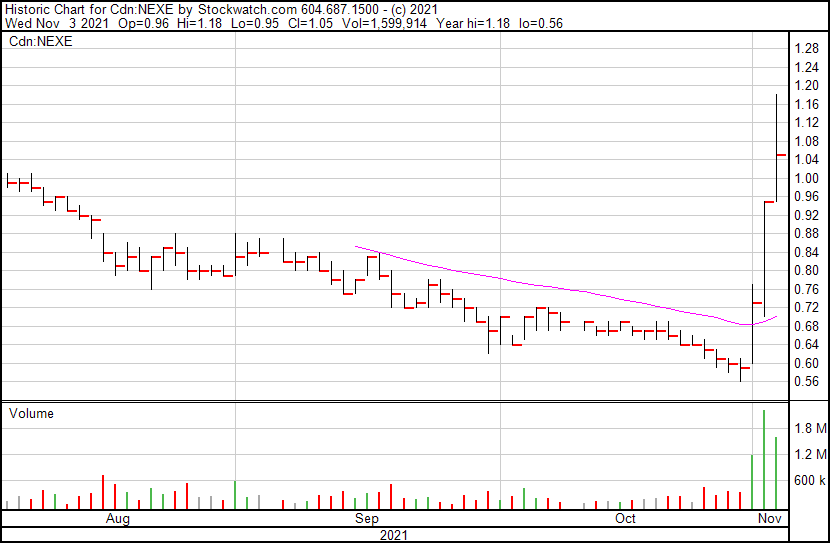 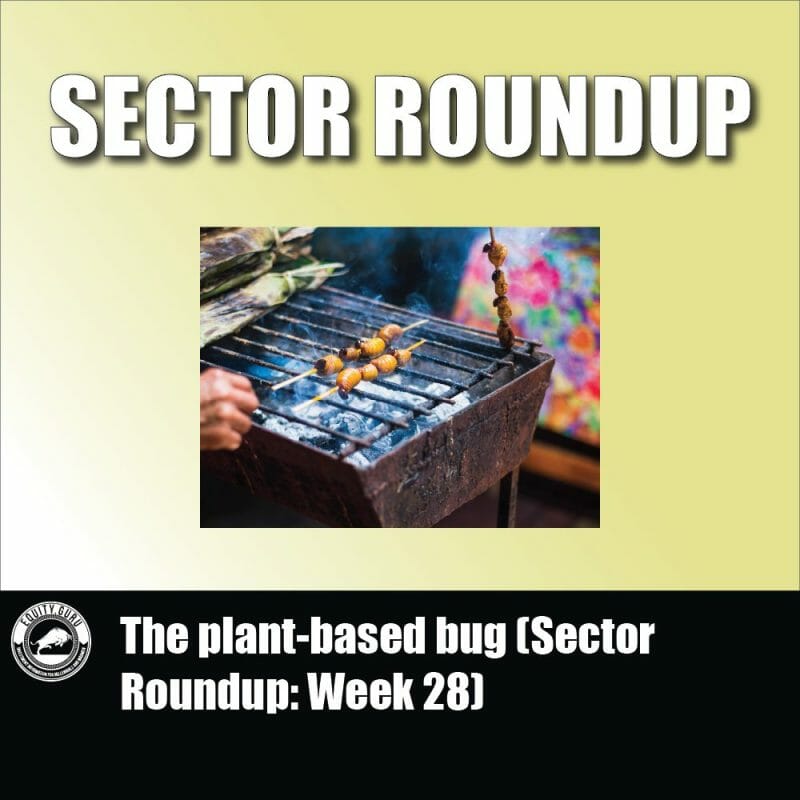 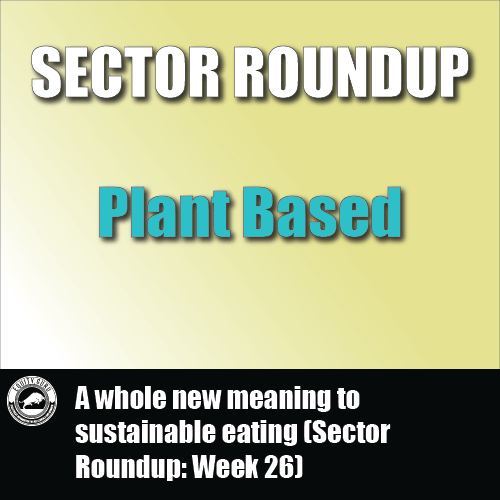 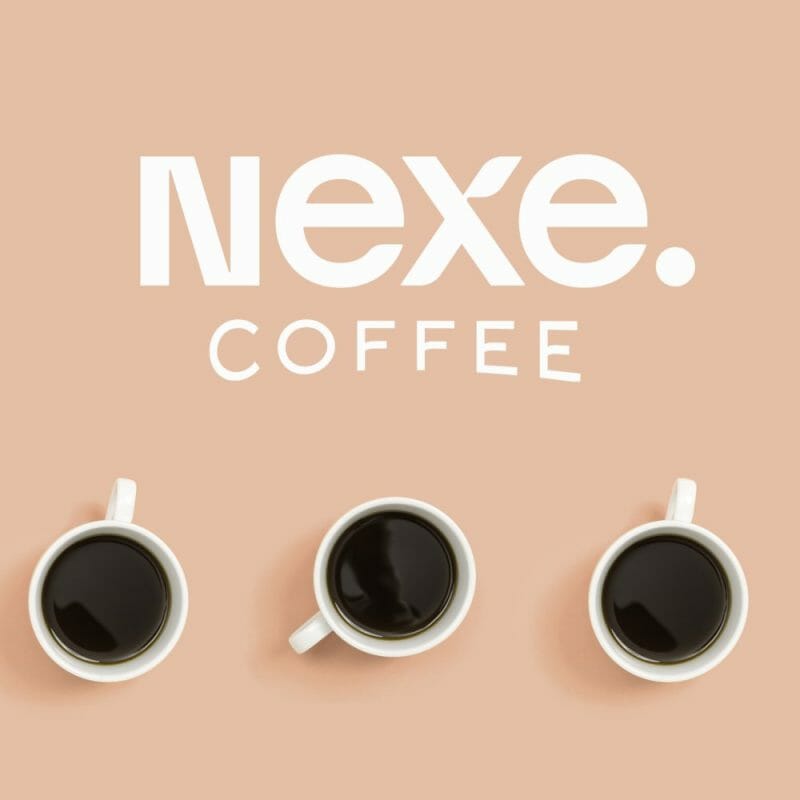 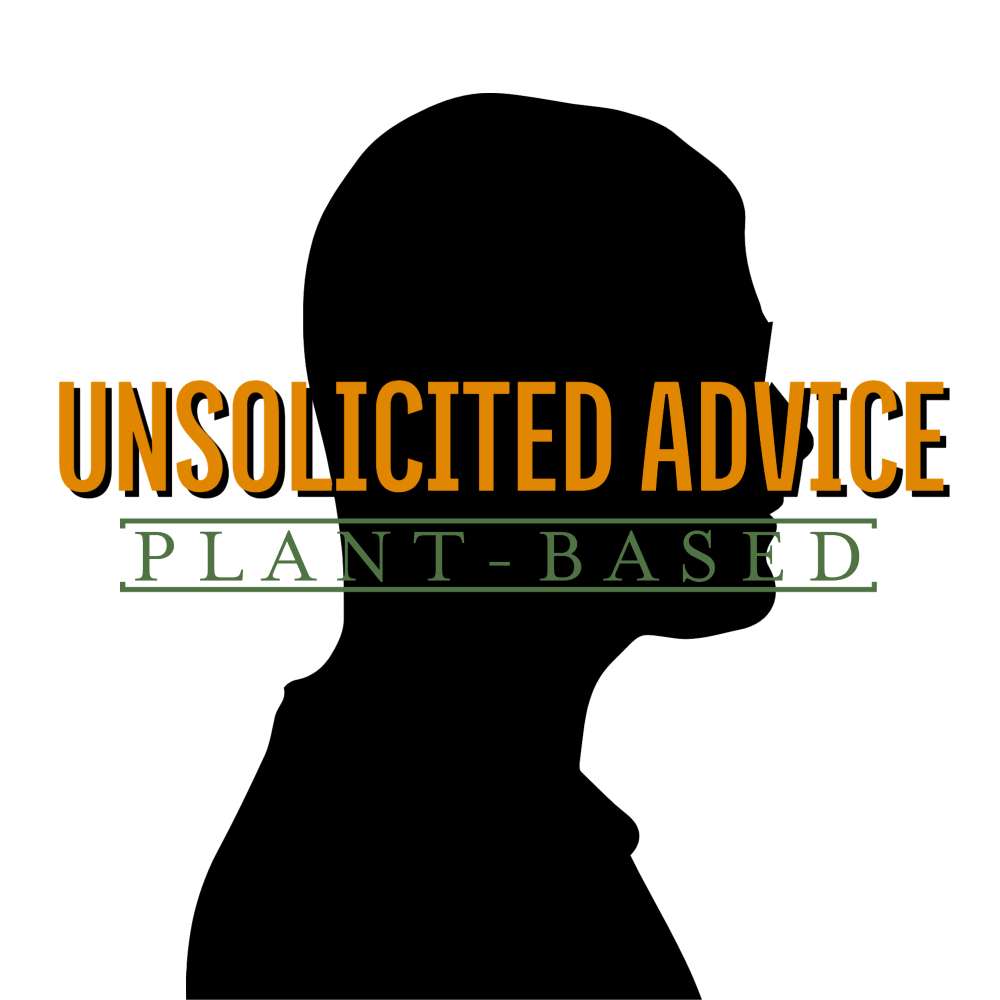 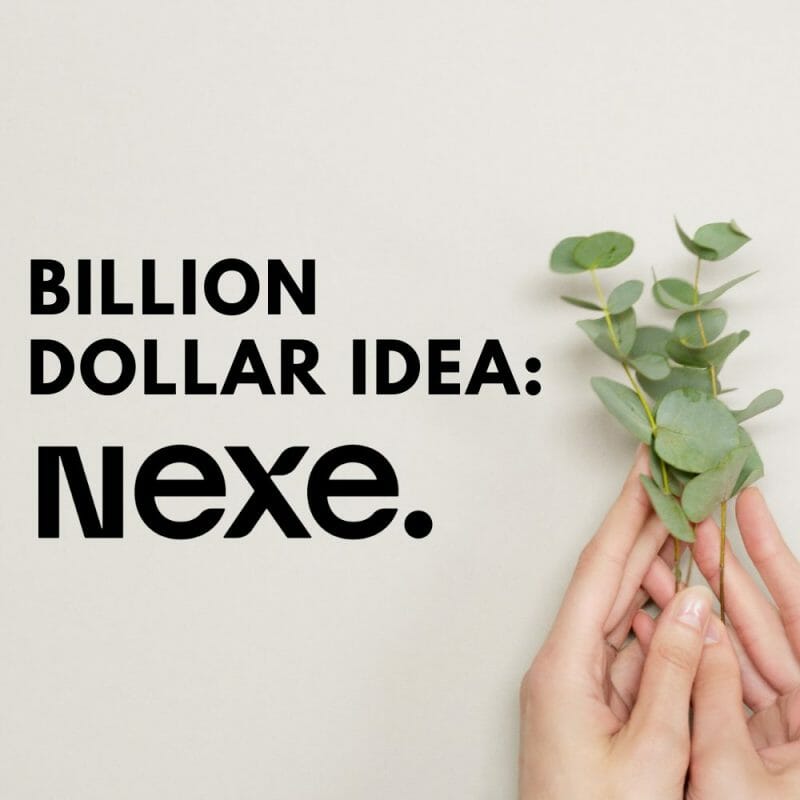 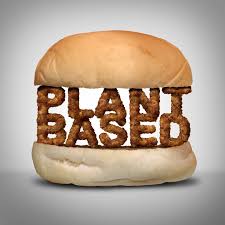