It’s been a point of pride for us at Equity.Guru that, six months ago, we pointed out Gold Mountain Mining (GMTN.V) and its CEO Kevin Smith and said, ‘these guys, these guys are going to be special,’ and month after month the company and its leader have proved us right by nailing every milestone.

We pointed out the aggressive nature of God Mountain’s business model wasn’t for everyone. We noted the company was promising to NOT go through the usual ‘endless financing and drilling’ routine executed by so many resource juniors, and that they instead planned to go in with a small, quick, production plan that would allow them to zero in on existing resource pockets, and dig for veins as they go, rather than drill for them in advance.

Bit riskier, sure, but also a lot faster, cheaper, and more likely to take advantage of a hot short term gold price swing.

Thankfully, the GMTN crew have done exactly as they promised and the share price has gone through six years of price bumps in just six months as they jump from success to success. 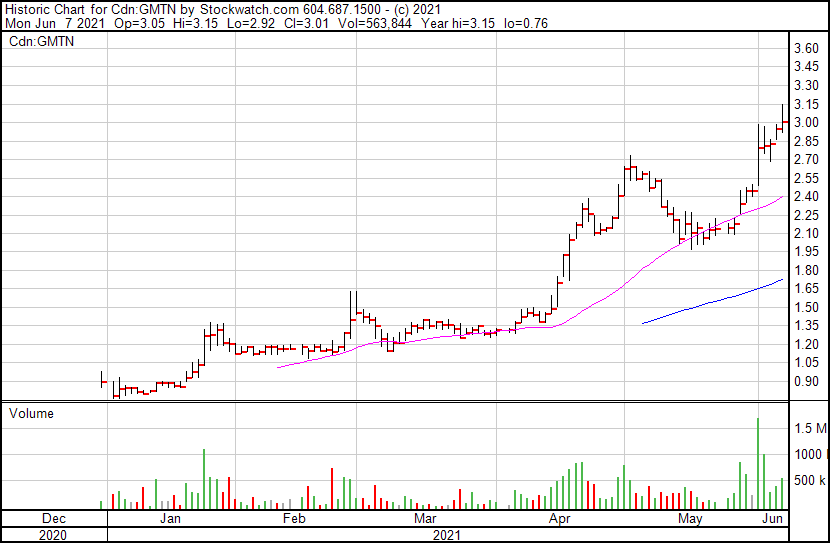 Today, perhaps the biggest of those successes was announced, as the company revealed government regulators are moving as quickly as the company has asked them to, and Gold Mountain has received its draft mine permit.

“We were told our permitting timelines were aggressive since going public on December 31, 2020. Receiving this draft permit is a testament to the management teams ability to execute and maintain our ambitious schedule,” said Kevin Smith, CEO and Director.

“Following our initial review of the draft permit we are encouraged to see that all conditions fell inline with our expectations and we anticipate providing our final comments to [the BC Ministry of Energy, Mines & Low Carbon Innovation Communications Office] very shortly.”

“This is the final step before it is sent up to the Statutory Decision Maker for final approval. This is an exciting development for all of our long term supporters and we look forward to delivering on our commitment of building BC’s next high grade gold and silver producer.”

Again, this company has been public for just six months, and has gone from plan to draft mine permit in lightning fast time.

And investors have been doubling down. In fact, true story; just this past weekend, while watching our kids on the soccer field, a friend who works for TD Wealth told me he’d just been ‘up to see a gold mine’ he’d invested in, and noted how impressed he was seeing it up close, and talking to the team, in the flesh.

He went on about how great the crew was, how professional everything had been, and how impressed he was with what they’d been doing.

“Because you were impressed,” I said. “Most junior gold projects aren’t impressive, especially up close..”

So what’s a draft mine permit?

A Draft Mine Permit is provided to applicants in advance of issuing a final permit in order to provide the opportunity to comment on any permit terms and conditions. The Company anticipates providing feedback to EMLI and finalizing permit language in mid-June. Once the permit language is agreed to, the final Mine Permit is submitted to the EMLI Statutory Decision Maker for final approval. The final Mine Permit confirms EMLI’s approval of the Company’s Mine Plan and Reclamation Plan for work at the Elk Gold Mine.

Now, this doesn’t mean GMTN can start producing in a few weeks. There’s still plenty to do:

Let’s be clear – this is land speed record timing. Most resource juniors never get to finalizing their mineral resource estimate, let alone a draft mine permit. For GMTN to be where they are, now, is frankly absurd. Unheard of. Just not done.

It’s like when a husband buys his wife a bouquet of flowers ‘just cuz’ – it makes every other husband in the neighbourhood look like an asshole in comparison.

Word to the wise, resource CEOs – Kevin Smith is making you look atrocious.

FULL DISCLOSURE: Gold Mountain Mining is an Equity Guru marketing client and, hell yeah, I own stock in it.