The decision to build and launch their online store came about as a shift in Super Smart’s short term strategy. They intend to establish an online presence during the COVID-19 lockdown, but now that much of the United States has opened, and The Netherlands has experienced a longer and stricter lockdown than what the U.S. had to deal with (more similar to us in Canada, actually) they’ve decided to put the physical brick and mortar part of their rollout on the back burner and focus on their digital presence.

“This store is the culmination of over two decades of personal experience with plant medicine, including superfoods and functional mushrooms, and I couldn’t be more excited to launch. My life has been positively impacted through the consumption of these products and I am thrilled to have the opportunity to share them with the world,” said Harry Resin, president of Super Smart.

BUZZ is a pharmaceutical company working on research and development as well as commercialization of controlled substances and natural medicines like psychedelics, cannabis and other naturally derived approved drugs.

The company’s subsidiaries include an 80% stake in German medical cannabis distributor, Pharmadrug Production GmbH, as well as complete ownership of Super Smart, a Dutch company involved in the adult-use psychedelic space in The Netherlands, and lastly, their recently acquired Sairiyo Therapeutics, a biotech company bringing them research and reformulation potential with established natural medicines, with the aim of getting them through the regulatory hoops required to land them in solid research-driven clinical trials.

The products offered as an curated assortment will grow as the team develops and sources new products that meet the company’s guidelines. Folks who come to the Slim Winkel site will find informative blogs and educational content to help them add mushrooms to their lifestyle. It’s these educational resources that are at the heart of the Slim Winkel concept, and the company believes that adding these resources for their customers will give them a wider understanding not only of the products being offered but the benefits of those profits.

The company’s online strategy extends itself to a U.S.-based platform for brand awareness and distribution to be prepared if the U.S. decides to legalize psychedelics. Meanwhile, the European Slim Winkel will sell psilocybin truffles as well as functional mushrooms in The Netherlands, and service other parts of Europe, but without the truffles.

Naturally, once the lockdowns are over, BUZZ will resume their brick and mortar strategy, and has several locations in Amsterdam lined up for a potential major flagship store. The buildout for the store will be the core focus, and management will get to work on signing a lease, and then spreading out to five other identified cities in The Netherlands. 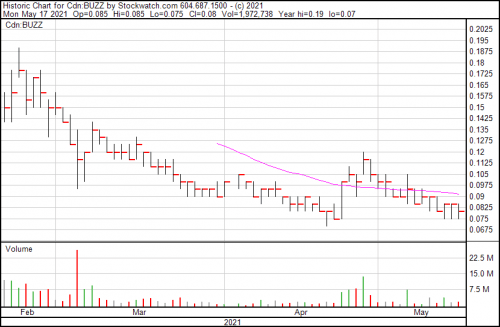