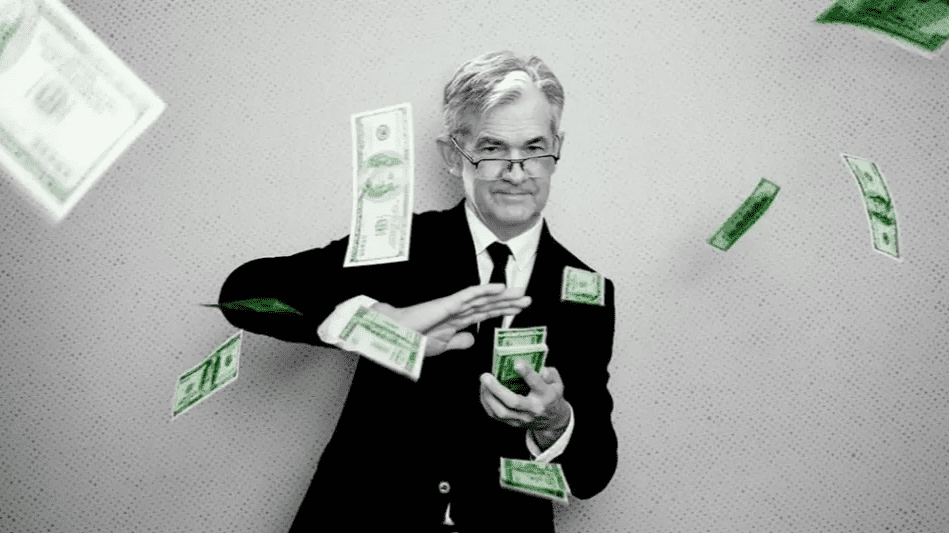 The Federal Reserve held interest rates close to zero, and maintained the current bond purchasing program. No change as widely expected. This was one of those anticipated FOMC rate decisions as Jerome Powell had to tell the financial world the economy is improving, but also convince them that current monetary policy is needed…and maybe for a long time.

Even so, traders and analysts are already beginning to debate on whether or not the Federal Reserve hikes this year, rather than Q4 of 2022. 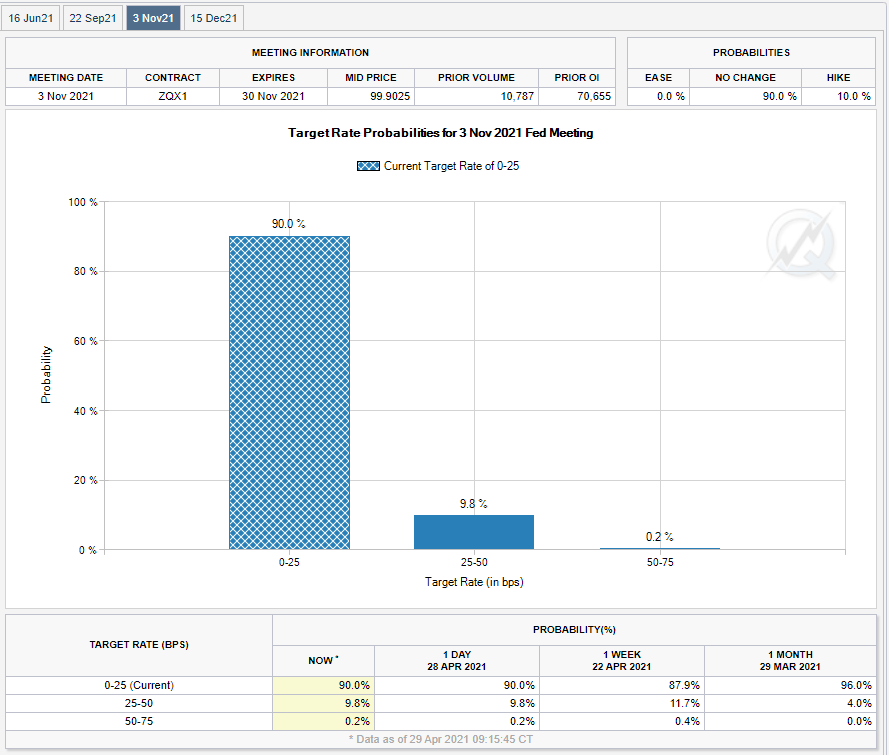 In case you are curious, Fed Fund Futures is beginning to show that an interest rate hike in November 2021 is increasing in probability. A 10% chance. Not much, but has increased over time, and can very well keep increasing as time and more data comes out.

The key points summarized from yesterday’s Fed meeting are as follows:

Even though there were some encouraging words hinting to an economic recovery underway, the Fed is not indicating it will change monetary policy anytime soon. Jerome Powell said this recovery is “uneven and far from complete” and that, “It will take some time before we see substantial further progress.”

Increased vaccinations, together with strong government fiscal support, and of course the Fed’s monetary policy, are indicator’s of economic activity and employment strengthening. Powell mentioned this in the past, but people need to feel safe going out and going back to work. The vaccine should achieve this.

Inflation is always the talking point. The Fed admitted that inflation is increasing. However, the caveat is that the Fed says that this inflation is ‘transitory’ or temporary, hence does not meet their requirement of consistent 2% inflation for tapering and interest rate hikes.

While he noted that inflation pressures could rise in the coming months, these “one-time increases in prices are likely to only have transitory effects on inflation.”

Readers of Market Moment, and our Discord Trading Room members were notified about this in advance. I theorized the Fed would use rising oil prices as a way to mask inflation from their monetary policy. Higher oil prices is why things are pricier due to an increase in fuel prices for transportation. Hence ‘transitory’. Going to say it now folks, be prepared to hear this word, ‘transitory’, many times going forward. This will be the way the Fed will maintain their current policy. The truth is inflation is inevitable. We have people with more money now competing for the same number of goods and services since productivity has not increased. When things re-open fully, the money velocity will just exacerbate this situation.

One of my favorite moments from the press conference was the very last question. Jerome Powell was asked why the Fed is NOT thinking of tapering when the economy is improving, bank lending is falling, the markets are operating well. The journalist then asked whether or not the reason the Fed is not tapering is because they are afraid of the taper tantrum. Markets will fall, bond yields will rise as suddenly there would be no buyers.

Jerome Powell looked a bit flustered and answered that it is not really more complicated than this: the substantial further progress goals set by the Fed in December 2020 have not been met, and actually indicates there has been little progress since December. Vaccinations, good job data and economic data does not equal substantial further progress. And we are not close to it. One good jobs data and economic data does not cut it. More are required.

We got two more data points out today that signal the US Economy is recovering.

US Q1 GDP came in at 6.4% missing the estimate of 6.5%, but being the second fastest pace growth since Q2 of 2003. The top is still the Q3 2020 GDP data from re-openings. Most of this was consumer driven, largely thanks to $1400 stimulus checks. Economists expect a boom-like year. 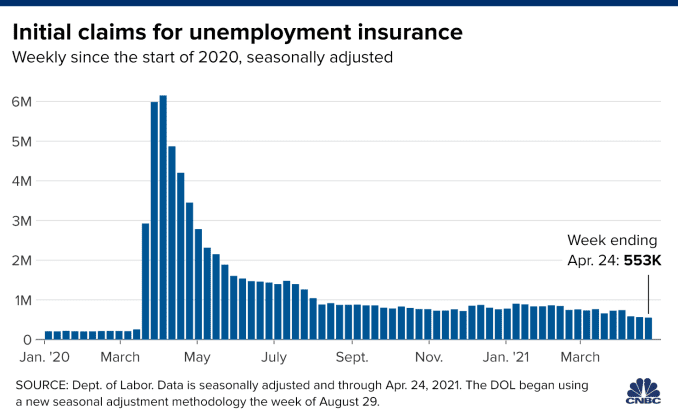 US Jobless Claims came in at 553,000. Still relatively high. Half a million people signing up for first time unemployment benefits. Still losing their jobs. But it beats the 700,000 plus jobless data we used to get.

Both of these data prints show that economic activity and employment is beginning to recover just as the Fed said.

To many, the Fed is keeping the party going. Nothing changes so expect Stock Markets to remain higher. Perhaps the comment about the taper tantrum is true. As we head forward, will the Fed be fearful of tapering knowing the likely Stock Market reaction? 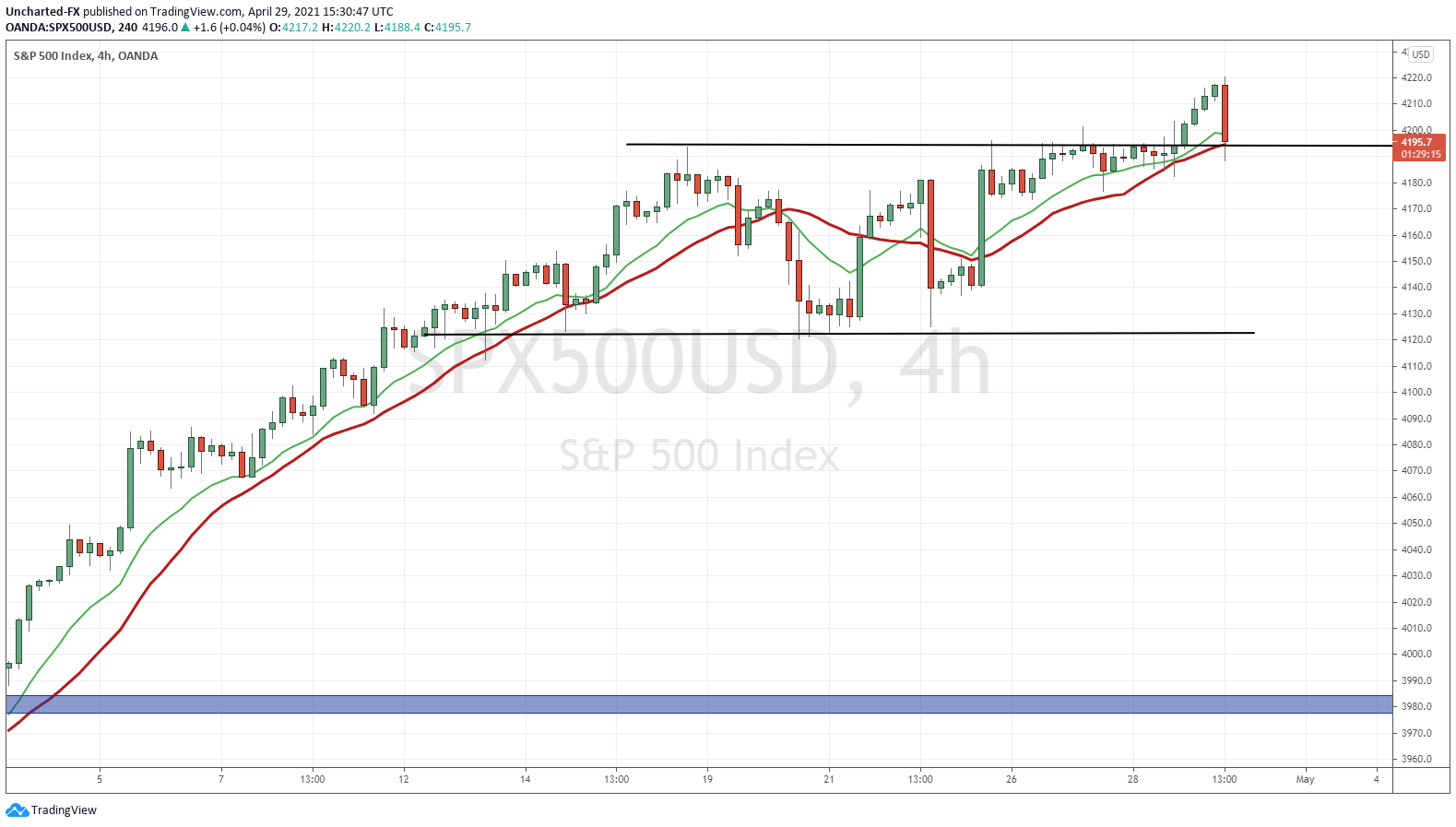 The S&P 500 broke out into all time highs after the Federal Reserve announcement yesterday. The momentum continued overnight. This morning we are seeing a sell off but back to retest the previous resistance zone now turned support. With nothing changing from the Fed, I expect markets to hold and bulls will buy the dip. The only things that can bring markets lower would be perhaps Biden tax comments and some sort of Black Swan event. 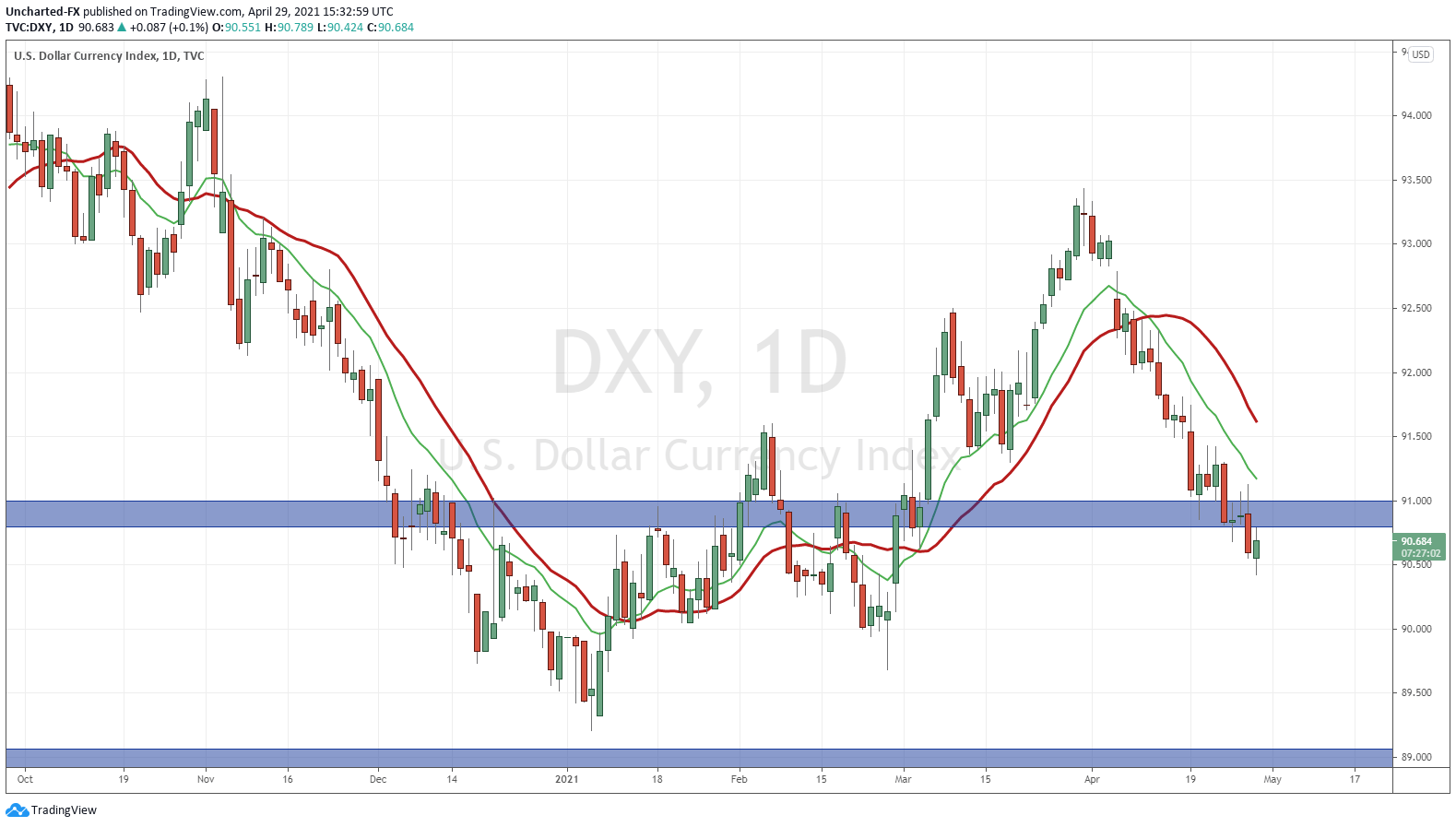 The US Dollar also dropped after the FOMC meeting. We closed below 91 on the DXY. Makes sense with the Federal Reserve policy. More Dollars being printed. 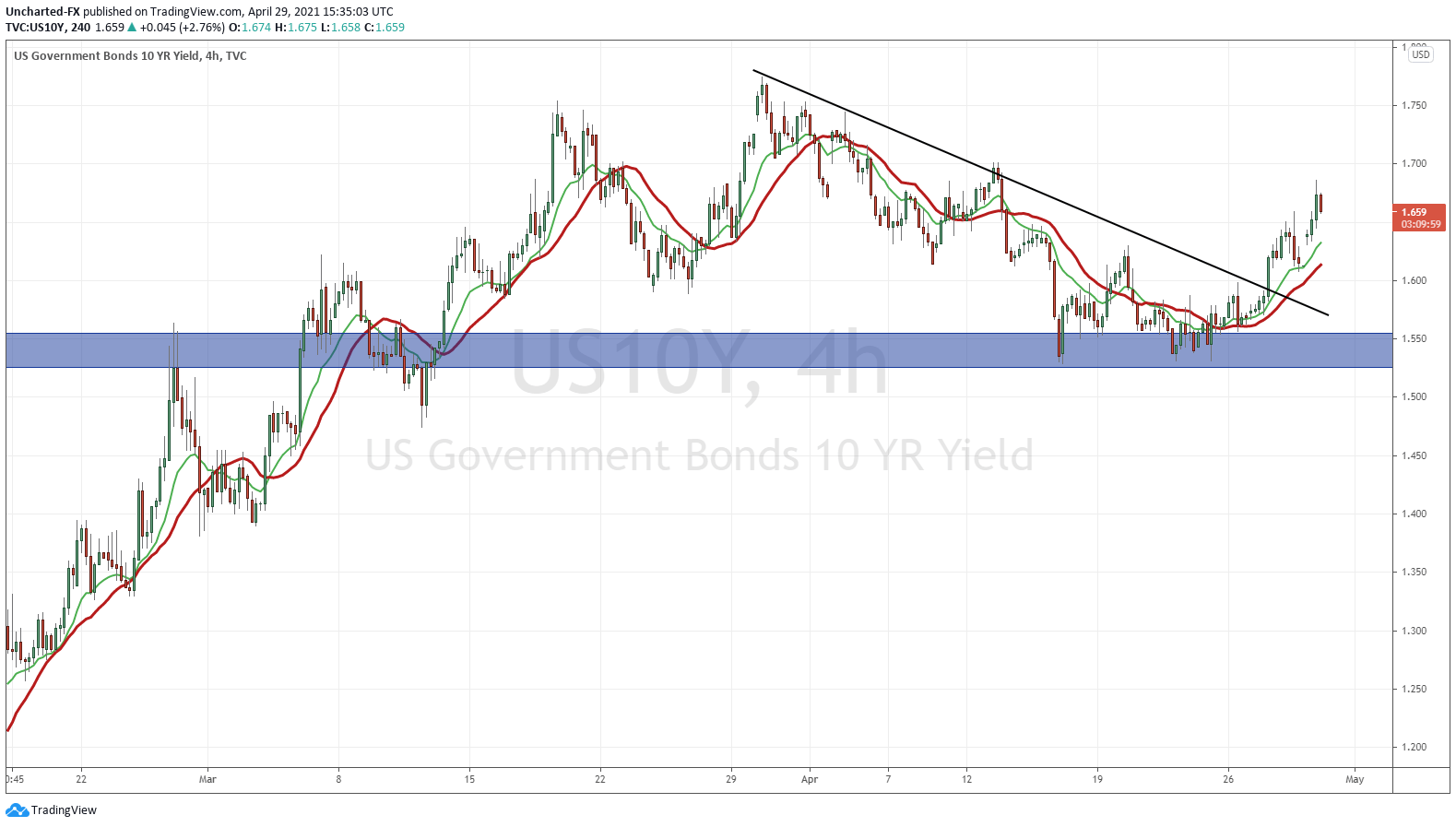 The 10 year yield is the worrying aspect. Yields are rising, and we are close to 1.70%. Money is leaving bonds and headed into stocks or remaining in cash (maybe even crypto’s and commodities?). Rick Santelli over on CNBC mentioned that the Fed will have to raise rates sooner rather than later with the 10 year yield rising. More expectations and pressure for a rate hike will increase when the 10 year surpasses 1.75% and makes its way towards 2%.

We will continue to watch this chart.

In summary, a meeting that did not surprise. The impressive bit was the Federal Reserve telling us the economy is rising but managing to convince the market that momentary policy will remain the same for a long time. I am just thinking how things progress going forward. Can the Federal Reserve really hike interest rates knowing how much debt there is in the system? Can the government service the debt with higher interest rates? Will the consumer be able to do the same when taxes are rising also? Will Stock Markets sell off on a taper tantrum? Does anyone step in to buy bonds? How many times will ‘transitory’ inflation be used?

All important questions and points to consider. But for now, the party keeps on going.