Crypto doesn’t really have the same appreciable metrics as other assets in determining value. The closest asset we have for comparison is gold, so much in fact that Bitcoin (and Ethereum) actually possesses a lot of the same characteristics—such as their shared tendency to act as a safe haven asset. But gold is in limited supply, and cryptocurrencies produce more every few minutes.

The comparisons don’t end there.  Gold has industrial uses as well as demand for luxury items like jewellery. Bitcoin? Not so much. Ethereum comes close with its prospects for decentralized businesses and financial options. But Bitcoin (and to some extent, Ethereum) derives its worth from pure supply and demand—and it never runs short of supply, and demand is mostly a function of market sentiment.

If the FOMO percolating in your gut is telling you that you have to get in somewhere to take advantage of Bitcoin’s run, but you’re defeated by the asset’s strange demand metrics and you’d prefer to have an alternative avenue with more traditional quantifiable data, then you’re in luck. Bitcoin’s spawned a number of peripheral industries, but if you want to get close enough to Bitcoin’s infrastructure to make money, then you likely want miners.

Mining’s how Bitcoin gets made and while it’s fates are tied to those of the asset, there are potential avenues available to individual companies if one asset begins underperforming. Bitcoin took a dive in the middle of last month. Pay attention to the mid-February decline and compare it to the companies below.

But a dip in the price doesn’t necessarily mean the underlying company has lost any of its value. Some investigation becomes necessary, and in the two companies that follow, we see similar trends in the short term which will likely diverge and move in different directions.

There is such a thing as too much growth. When it comes too fast, it’s unlikely that it’s part of a scaled, controlled approach, and has more to do with market sentiment and all the bells and whistles, and eventual betrayal, that come from such.

Hive Blockchain has grown considerably over the past few years, and it probably represents the most conservative bet in all the crypto-mining space. We’ve trumpeted the reasons we believe Hive is the best bet out there in the past.

Here’s what we said:

How have they performed?

Their income from digital currency mining was $13.7 million for the quarter, which is a 174% increase from this quarter last year at $5.7 million, and a 5% increase over last quarter at $3.1 million. Gross margin deve 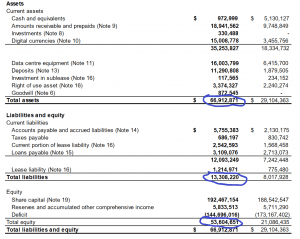 loped to $10.6 million from $3.8 million last year, and also increased over last quarter’s numbers at $9.2 million.

You’re probably going to need to click on the image to see their development in their assets and the reduction of their liabilities:

Compare them with their previous performance period ending in March, and we see measured growth over time based on a mix of positive market sentiment, diversification of coins mined and slashed operating costs.

If there’s a negative to be said about Hive it’s found in their cash position. According to their financials, released a few days ago, they’re presently under $1 million. There’s nothing cheap about mining Bitcoin, and while Ethereum is a decently inexpensive (when compared to BTC mining) alternative, it’s not exactly cheap either. For now. If this company wants to avoid running out of runway, even despite the present dip in Bitcoin’s fortunes, it’s going to have to raise some money to cover the cost to keep competitive.

The takeaway is that this company has taken a diverse and measured approach to growth that’s taken into consideration not only their shareholders positions, but the general effects of the market. In the unlikely event of Bitcoin’s price dropping below profitability, they can pivot to Ethereum or any other coin they’re mining. Also, the advent of ETH 2.0 and the gradual shift from Proof-of-Work mining to Proof-of-Stake brings with it a vast reduction in mining costs per coin, which will push down their overhead even further.

That’s a net positive right there. Let’s see the other side.

If you’re going to be competitive in bitcoin mining then you’re going to need to do it at scale. Right now, the price of a single bitcoin is CAD$49,323.35, and 6.25 of them are released every ten minutes. The difficulty of calculating the hash function, and therefore getting that sweet block reward, was 1 in 16 trillion in December 2020, and changes every two weeks based on the number of inputs. That’s why Bitcoin mining isn’t a DIY exercise that you can do from your mom’s basement anymore.

Mining includes companies from each continent competing with China’s 60% market dominance for a financial rat-race pellet every ten minutes, and it makes sense to want to build bigger, faster machines and implement strategies to reduce overhead.

The general thrust for Marathon Digital Holdings (MARA.Q) (formerly Marathon Patent Group)  is a fine example of Kevin Costner logic: Build it and they (the profits) will come, but if there’s anything that we should have learned from 2017 it’s that Bitcoin’s a fickle, unreliable beast and one wrong market cue—from say, Elon Musk—can send the price hurtling down to earth.

What happens to the peripheral companies when the price’s fluctuate? Observe.

If you bought in on the original rise in January, then congrats. Take your profits and invite me to your party. If you bought in February, best of luck. The turnaround in Bitcoin’s prices aided by shaky fundamentals, which we’ll get into, shaved almost two thirds of its market cap off in a month. It’s important to be mindful of sharp spikes, either up or down, and at least try to find the reasoning behind them if you’re going to play the speculative game.

In this case, it’s likely something to do with Bitcoin’s trajectory mingled with their rate of growth accompanied by general underperformance.

Something noteworthy stands out on their fundamentals page.

A negative price to earnings ratio means that the company has negative earnings, and is losing money. At -72.75, “losing money” doesn’t quite cut it in terms of description, though. “Bleeding out” is more like it.

Here’s the chart for the M31S:

The bottom line shows profitability, but that’s before the extra hidden costs towards mining Bitcoin can be factored. If you’ve got these bunched together in a room, that room’s going to need an air-coolant system to keep them from overheating. That’s not cheap. They have deals in place to ease the damage, but will it be enough?

The specifics about the Antminer S-19 Pros are that they’re expensive. One of these bad boys retails for roughly $4,000 and the company bought 10,500. The company’s documentation isn’t exactly specific about what kind of a deal they got from Bitmain, but going by standard retail—that’s $42 million. And this isn’t the first time this company has shelled out big bucks to fill an entire room with computing power, especially for an asset class that sees brisk rises and declines based on sentiment.

They have to mine a lot of Bitcoin to break even and even more to justify that $3 billion market cap.

But MARA’s well aware that Bitcoin mining isn’t the only way to make money from this asset class.

They’re doing what they can to move beyond mining as a solitary source of revenue to being a holding company for Bitcoin. They bought $150 million worth of Bitcoin earlier this year with help from New York Digital Investment Group (NYDIG) in an attempt to position itself as the only investment option for individuals and institutions looking for Bitcoin exposure listed on the NASDAQ.

“By purchasing $150 million worth of Bitcoin, we have accelerated the process of building Marathon into what we believe to be the de facto investment choice for individuals and institutions who are seeking exposure to this new asset class. We also believe that holding part of our Treasury reserves in Bitcoin will be a better long-term strategy than holding US Dollars, similar to other forward-thinking companies like MicroStrategy,” said Merrick Okamoto, Marathon’s chairman & CEO.

The final takeaway is that MARA’s grown too far too fast and they’re vastly overvalued. The whipping they’ve taken is only the beginning. They could be an interesting company in the future, but their mining revenue and recent diversification attempts, including the hefty $150 million price-tag attached, aren’t likely to be enough to staunch the bleeding anytime soon.