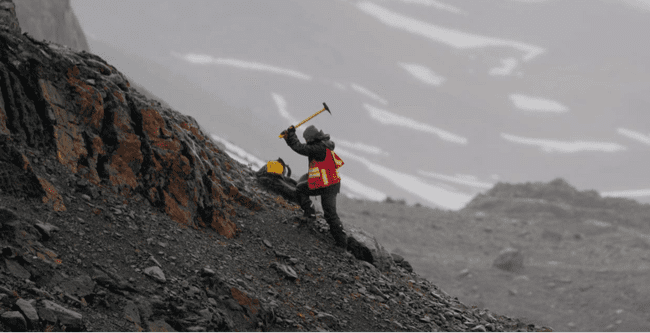 Goldrea (GOR.V) – on the hunt for porphyry and high-grade gold in BC’s prolific Golden Triangle

The allure of the discovery cycle… There’s nothing like holding a position in an early stage ExplorerCo that goes on to tag a world-class discovery. It’s kinda like winning the lottery.

One of my first forays in the junior exploration arena was during the early innings of the Eskay Creek Gold Rush. This area along the rugged north coastal mountains of British Columbia—the Iskut River region—was shrouded in mystery.

The discovery was difficult to ignore.

The excitement surrounding Eskay Creek lit up the Vancouver Stock Exchange (VSE) like the 4th of July.

This region is called The Golden Triangle.

A fantastic Gldn-Tri anecdote from days of yore…

A prospector named Tom Mackay was the first to recognize the area’s unique geological setting after spotting an enticing rock outcrop from his single-engine bush plane.

“This will become one of the greatest mines in the country,” Mackay was oft heard to say.

A boulder Mackay discovered on the property assayed out at a spectacular five ounces of gold per tonne, prompting him to drill the immediate area around the find.

What Mackay didn’t realize at the time was that the gold-rich boulder had broken free from its source, rolling over a dozen meters down a slope.

According to Ron Netolitzky, Eskay Creek explorer and geologist extraordinaire, “They were so close they could taste it.”

Years passed. Decades went by. Tom MacKay worked the property for over half a century, but finding the source of that gold-rich rock proved too elusive.

After Tom passed, Marguerite MacKay clung to her husband’s legacy, taking over control of his company—Consolidated Stikine Resources.

It was a struggle for poor Marguerite. Funds were low. Her board of directors was well past retirement age and lacked the skillsets of a new, younger generation of prospectors.

Marguerite’s days of maintaining control of Eskay Creek were numbered. Her 200,000 Consolidated Stikine common shares were near worthless, trading below a nickel, on the rare day they traded at all.

Then, in early 1988, geologists John Toffman and Ron Netolitzsky entered the fray—they liked what they saw in the widow Mackay’s Golden Triangle real estate.

A short time later, the colorful, brash, and often outrageous Murray Pezim was brought in to help move the project forward. 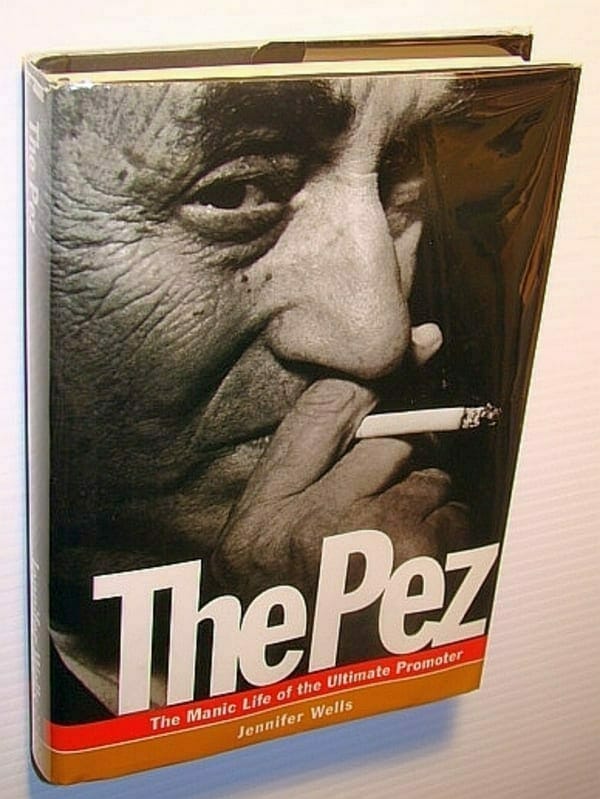 It was in the Fall of 1989 when Consolidated Stikine and Pezim’s Calpine Resources struck pay dirt.

Tearing up their exploration budget, they drilled straight on through the brutal northern BC winter.

In the summer of 1990, after drilling a total of 108 holes, each one better than the last, they hit a fault. The orebody disappeared. Its location had shifted off somewhere else along the mountain.

Chet Idziszek, Pezim’s onsite geologist, was stumped. After studying his maps and walking the terrain, Idziszek—a rock whisperer if there ever was one—dragged the drill rig to a location 350 meters from the last hole drilled. That’s where he sunk hole 109. 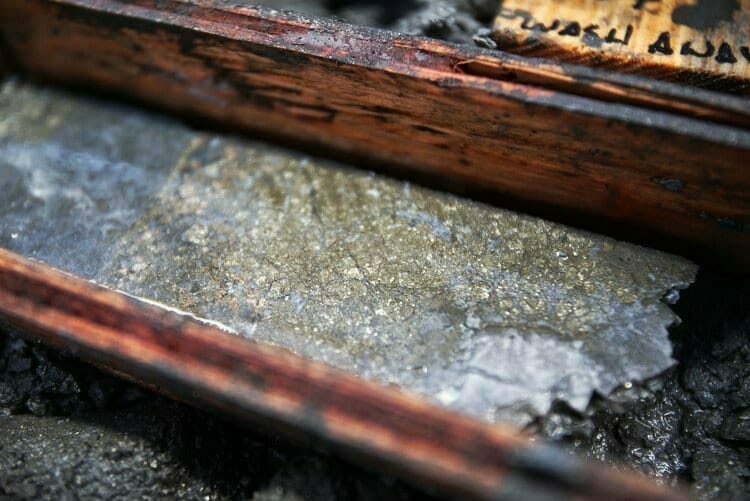 Hole 109 caused such a stir, such fervor it triggered a wave of claim jumping, forcing BC’s chief gold commissioner to invoke a staking freeze until the disputes, some of which were stacked seven deep, could be sorted out.

The VSE became a madhouse. Howe Street brokers’ were pushed to the brink of physical and mental exhaustion as a tidal wave of buy orders poured in.

Long story short: Calpine shares, which had sunk to a low of six pennies pre-discovery, rose to $9.75 after the news of hole 109 spread.

In the end, Marguerite’s 200,000 Consolidated Stikine shares—stock that changed hands for mere pennies only two years earlier—soared to $67.00 in the wake of an intense bidding war.

In 1994, after the dust settled, Eskay Creek went into production. The mine produced for the better part of 14 years, finally winding down in 2008.

During its peak, Eskay Creek was THE highest-grade gold producer on the planet. It had no equal.

How can you not be romantic about the mineral exploration game?

The Golden Triangle is now recognized as a world-class destination for both precious and base metals. The region hosts some of the largest (and richest) mineral deposits on the planet…

A Golden Triangle micro-cap worthy of your due diligence—Goldrea Resources (GOR.V)

Goldrea is at a very early stage along the exploration curve, but its two flagship properties—Cannonball and Adrian—are strategically positioned in the heart of the Golden Triangle. 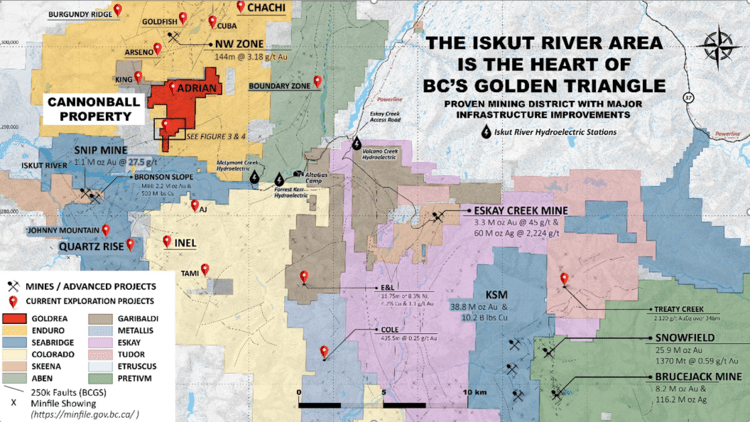 Cannonball and Adrian are flanked by Seabridge Gold (a $1.56B market cap colossus) and Enduro Metals (ENDR.V).

Also, note the Company’s proximity to the past-producing Snip Mine, a legendary gold deposit in its own right having produced 1 million ounces of gold at a grade of 27.5 g/t. The Snip property is currently owned by Skeena Resources (SKE.T), a Company that is no stranger to these pages. Like Eskay Creek (also operated by Skeena), Snip still holds significant high-grade potential—resources currently stand at 646,000 ounces at grades exceeding 13 g/t Au.

Note the high-grade surface values on the map below. 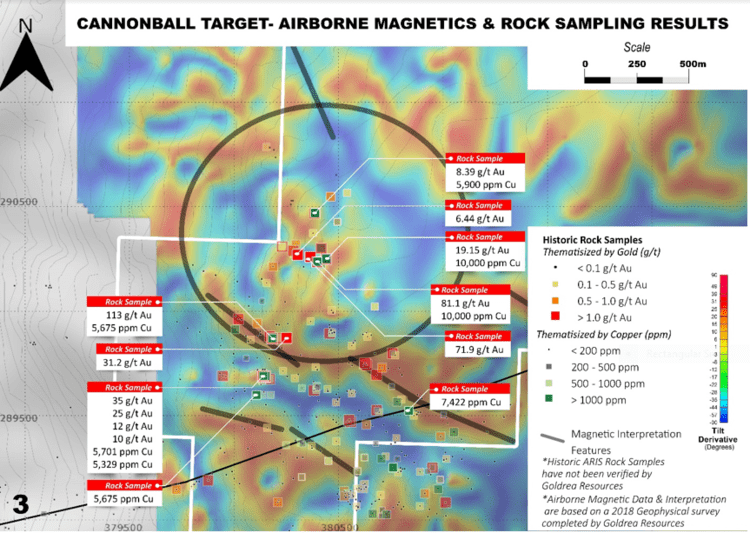 The 2,269 hectare Adrian target features a structurally controlled quartz sulfide vein system that has been traced for over a kilometer.

Nine grab samples collected back in 1988 returned gold grades ranging from 2.7 g/t to 30.0 g/t. The Company notes that the verification of these sample results is pending. 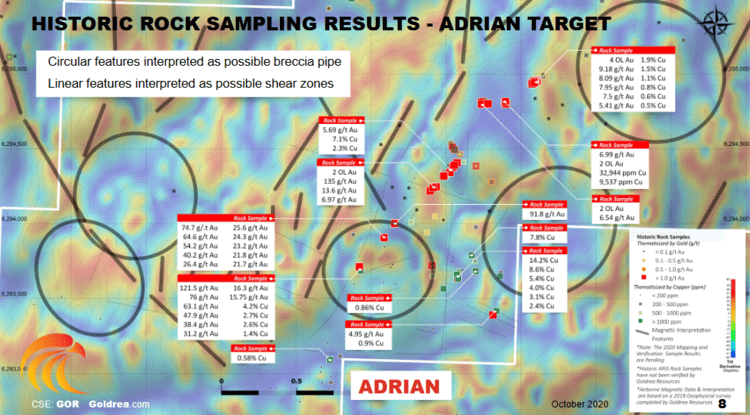 “The Company’s consultants have advised that the observed alteration patterns and sheeted veining are associated with the sub-circular magnetic anomaly identified in the west-central part of the Property and are consistent with Goldrea’s interpretation that the Cannonball Target may represent a porphyry lithocap similar to that developed at the Quartz Rise Target located 15 kilometers to the southwest.”

The Quarts Rise Target, currently being explored by Seabridge Gold, is located near the bottom left on the map below… 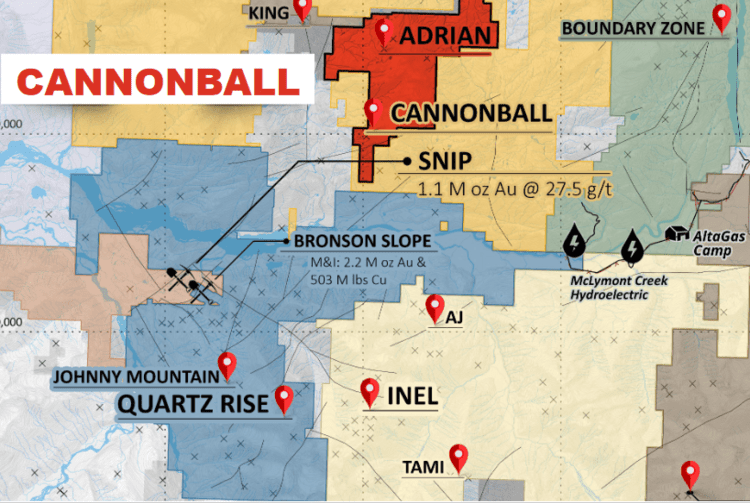 In 2018, Seabridge announced they had intersected porphyry copper-gold mineralization associated with a sub-circular magnetic feature and a large IP anomaly.

A drilling campaign conducted by Seabridge at Quartz Rise last summer encountered indications of higher grade copper mineralization (0.62% copper over 31.8 meters) and many of the earmarks of a large porphyry system which may lie below the drilling completed to date. These results were consistent with an alteration halo from a large porphyry system.

“Mineralized intervals of up to 158 meters grading 0.16 g/T gold and 0.16% copper were intersected, indicating that drilling to date is in the outer portions of a gold-copper porphyry.”

Seabridge management believes they are onto something big at Quartz Rise.

Goldrea management is understandably excited about this development as they are targeting the same type of structure only 15 kilometers to the northeast.

“The assay results from Goldrea’s 2018 and 2020 sampling program (consisting of 72 samples submitted for assay and an additional 70 samples submitted for petrographic work) confirmed that the sheeted quartz veins within the sub circular magnetic anomaly contain elevated copper, gold and silver concentrations (ranging from trace levels to 81.1 g/t gold, , 47 g/t silver and 0.754% copper).”

The results from this 2020 sampling campaign also confirmed historic reports of high gold concentrations associated with a narrow, highly oxidized shear zone. This zone was traced over a strike length of roughly 10 meters along the southwestern margin of a geophysical anomaly identified by the BC Ministry of Mines (Minfile 104B210: Brenwest / Joy Prospect).

The high gold concentrations reported from this shear zone suggest the potential for high-grade gold mineralization along the margins of the circular feature. 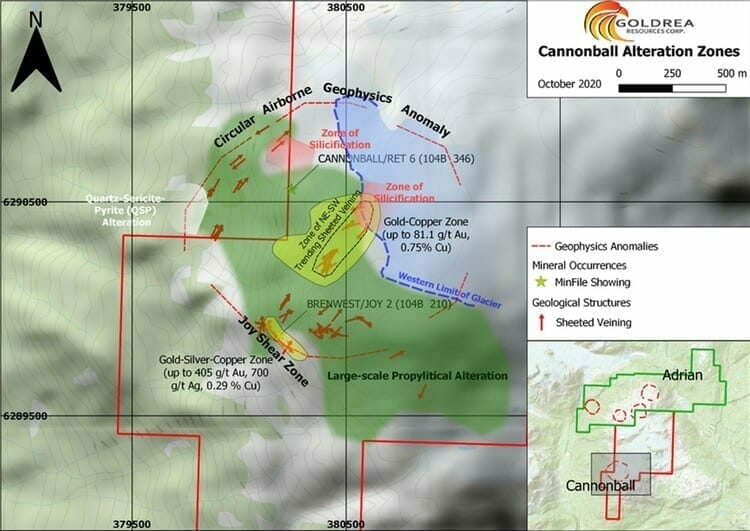 “The results of the Company’s 2020 field program clearly demonstrate that the targets identified on Goldrea’s Cannonball property warrant a high level of exploration work as is being carried out by our neighbours, Seabridge Gold and Enduro Metals. The summer program gave us very encouraging sampling numbers and alteration mapping, and also confirmed a potential preserved porphyry system on our Cannonball Property. We will be announcing a financing consisting of flow-through and hard dollars to conduct IP surveys and the first systematic drill testing on the Cannonball and Adrian Properties. The Company plans on taking advantage of the full 2021 drilling season in the Golden Triangle and give this exciting property the chance to reveal its makeup.” 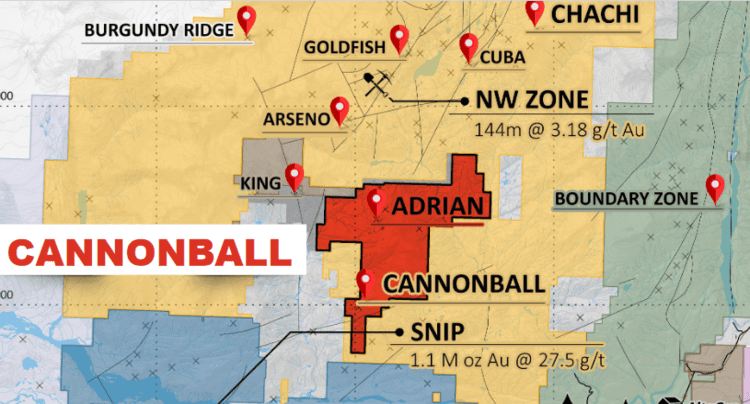 Drill hole assays will continue to flow out of the Newmont Lake camp. You can bet Goldrea management is watching developments here closely.

“The recent discoveries in the Golden Triangle seem to follow a pattern. Explorers find promising looking targets using airborne surveys and field mapping and then define drill targets using sophisticated ground-based IP surveys that can penetrate up to a kilometer below the surface.

Fortunately for Goldrea the terrain at Cannonball isn’t as challenging as many other parts of the Golden Triangle.”

When the exploration window opens late next spring, the Goldrea team plans to mobilize a drill rig. The Company will employ the above noted deep penetrating IP surveys to help guide the drill bit.

The Goldrea team is solid. I had the pleasure of speaking with Carl von Einsiedel, Goldrea’s Exploration Manager, and was struck by his depth of knowledge and passion for this project.

Goldrea controls a significant chunk of ground in one of the most geologically prospective regions on the planet. There’s still a lot of work to do, but if Carl and team succeed in tagging a significant discovery next summer, these sub-nickel shares will be a distant memory.