FansUnite (FANS.C) is the star of the junior exchanges these past few weeks, accelerating hard on the back of good financial news earlier this month, to be up some 200% in three weeks. The run has seen stock in the company move from a 52-week low of $0.185 up to $0.57 today, with trading volume being over 2 million shares for two weeks now.

The trigger for this run was a jump in revenues, but the momentum has been sustained because, for the first time in months, a mystery seller isn’t killing off the run by dumping their stock at every opportunity.

For a company on the junior markets to have a sustained upward run, several things need to line up. Business needs to be good. News needs to impress. And folks need to have the desire to buy in. But the biggest factor is, folks with a large holding need to not be selling every time there’s good news.

For FansUnite, a stock we’ve been talking about for around six months, that last factor had been weighing the company down to the point where, even a tranformative merger couldn’t move the stock up. This sucked because FansUnite was actually doing all the things it said it would; it grew and developed its product offerings and saw revenues climbing even as Covid was hitting other industries and shutting down the sports its McBookie subsidiary made a living from.

For FansUnite, Covid-19 wasn’t a business killer, because they adapted as it began to take hold. As live sports paused for a few months and their Scotland-based McBookie sportsbook waned, a shift to new online casino games brought the revenues back. And as sports soon returned, McBookie saw sports betting revenues now landing in addition to the new casino revenues.

In addition, as the earlier mentioned Askott Entertainment merger began to take root, e-sports betting began to add to the offerings, making for a nice financial statement.

The United Kingdom Sportsbook set company records with triple-digit growth in multiple areas, led by a 433-per-cent increase in overall revenue compared to October, 2019, and a total gross win of $602,000 during the month. Much of the growth was attributed to the unveiling of McBookie’s live casino games and increased activity in sports betting which resulted in $7.3-million in total betting volume being placed during the month.

Perhaps unsurprisingly, this month, the mystery seller’s foot finally came off FansUnite’s neck. It appears the person looking to offload their pre-public stake at $0.225 finally ran out of things to sell, and the company has skyrocketed to $0.57 in the weeks since.

We’ve been long telling people that FansUnite was legit, that the earlier stock slump made little sense, and that the day would come when things lined up properly once again. Those that held strong have a nice win to show for their faith. 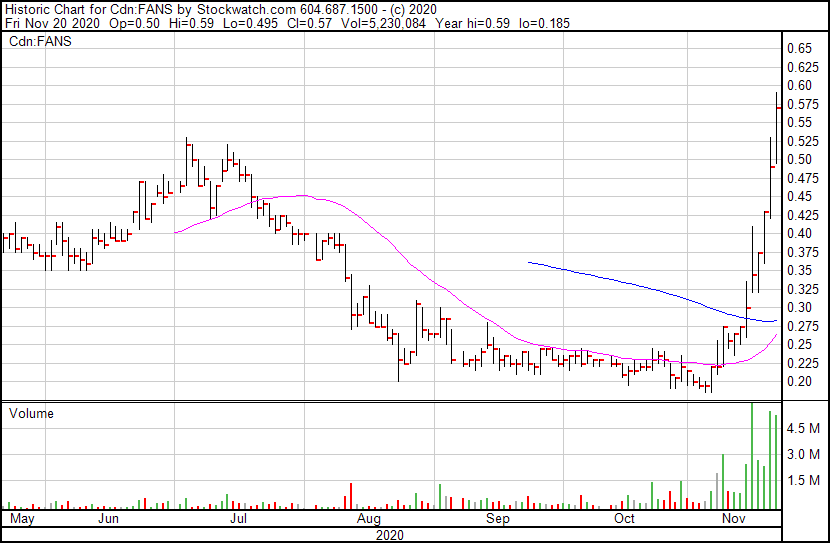 At Equity.Guru, we don’t expect a near term return to the disappointing mid-2020 for FANS, as their white label offerings will begin to add more revenue streams to the mix.

McBookie added new features, including bet builder, which enables on-line bettors to fully customize and build their bets across any number of markets, and instantly receive a price on their desired wager. The user friendly feature combined with a full slate of English soccer fixtures and the Scottish National Soccer Team’s presence in the prestigious UEFA European Championship qualifiers, helped propel the company to new financial heights.

“Despite the global pandemic, McBookie had a record-breaking month of growth in October and demonstrated how seasoned operators can not only pivot their business during challenging times but still produce results that propel their business to new heights [..] With sports now starting to come back and new products in their casino offering, we have full faith that McBookie will establish themselves as the preeminent on-line betting platform in Scotland and expand their footprint throughout the highly sought after U.K. gambling industry.”

— FansUnite is an Equity.Guru marketing client, and we own stock in the company.