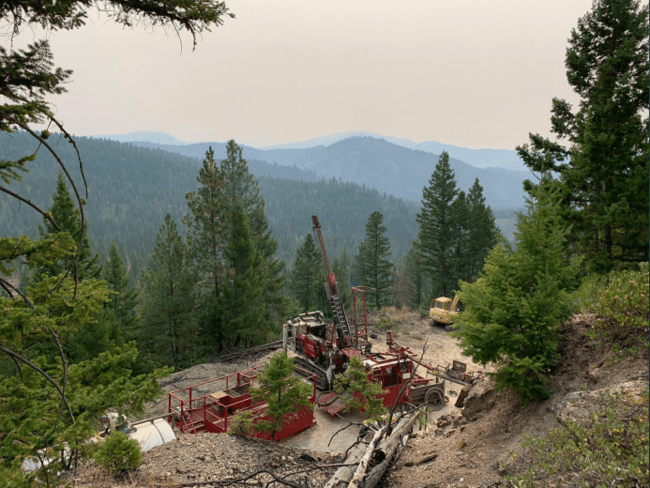 There’s a lot red running down the aisles of the junior exploration arena currently. High-quality gold and silver stocks are being tossed with little regard for their underlying fundamental value.

Concerning the metal itself, $1800 is obvious support, and we could test this level before this rout runs its course.

If your convictions regarding the precious metals are weak, you’ve likely been stoking the negative price pressure, dumping your positions wholesale (fear is a powerful motivator).

If your convictions are firm and unwavering, you likely view this current price weakness as a necessary unpleasantness that will ultimately be resolved with a powerful push to the upside. And you’re likely shortlisting some of the better values that are beginning to emerge, looking to deploy some of your sidelined capital.

Entering buy orders during periods of excessive weakness should never feel ‘right’ IMO. It’s a counterintuitive kinda thing—you’re going against the herd and for most, that’s contrary to our better nature. But personally, some of my very best trades were initiated during periods of such weakness… when I approached my trading platform with great trepidation.

Jurisdiction – a cardinal consideration when shortlisting companies in this arena

There’s much to be said for choosing a safe mining-friendly destination when compiling a shortlist, especially in this era of global economic uncertainty.

Resource-rich countries getting their asses kicked during this economic rout, particularly those with twitchy policy-makers at the helm, might be pondering a revision of their mining codes—raising taxes on foreign entities operating mines within their borders, bullying their way in for a larger piece of the action, or even outright expropriation.

It’s been known to happen.

And the aftereffects of such reckless governance…

This whole ‘jurisdictional risk’ thing is a weighty consideration. Downplay it at your peril.

In mid-April of this year, Lodge Resources acquired the Lemhi Gold Project in the prolific Salmon region of Idaho. After tabling a modest PP, one that nearly doubled in size due to popular demand, the company changed it’s name to Freeman Gold (FMAN.C).

Soon after, Will Randall took on the role of president and CEO, followed by Dean Besserer as VP of Exploration.

This new team has three primary objectives: proving up Lemhi’s historic ounce count, growing the resource base, and pushing the project further along the development curve.

A bit of background on the Lemhi Gold Project

Lemhi is located in Idaho, a state that boasts an extensive and rich mining history.

According to the esteemed Fraser Institute, in its most recent “investment attractiveness” survey, Idaho is ranked in the top ten global jurisdictions when it comes to kicking rocks and digging desirable minerals outta the ground. 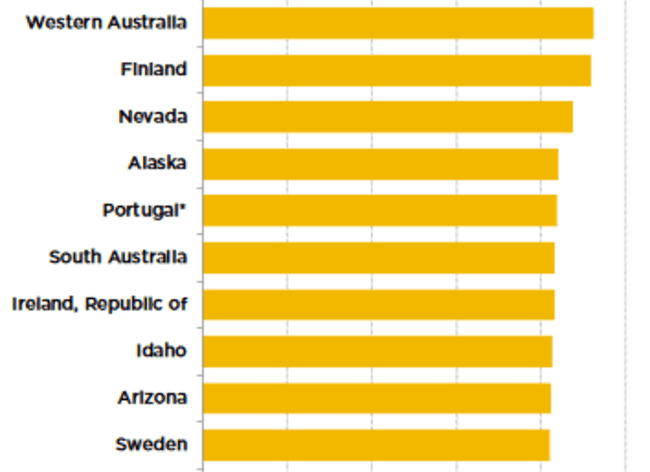 As hinted at earlier (okay, it was more than a hint), NOW, more than ever, it makes sense shortlisting only those companies operating in the friendliest of mining jurisdictions.

There’s always a risk in mining, no matter how friendly the jurisdiction. But taking a close look at the Lemhi project and the surrounding terrain, there are no environmental or social issues that stand out—there are no fish-bearing streams, rivers, or lakes in the region. The project is fairly isolated—there are no communities in the immediate vicinity. And the nearby towns—Salmon, Gibbonsville, North Fork—are supportive of the mining industry.

Bottom line: permitting the project should be a walk in the park. 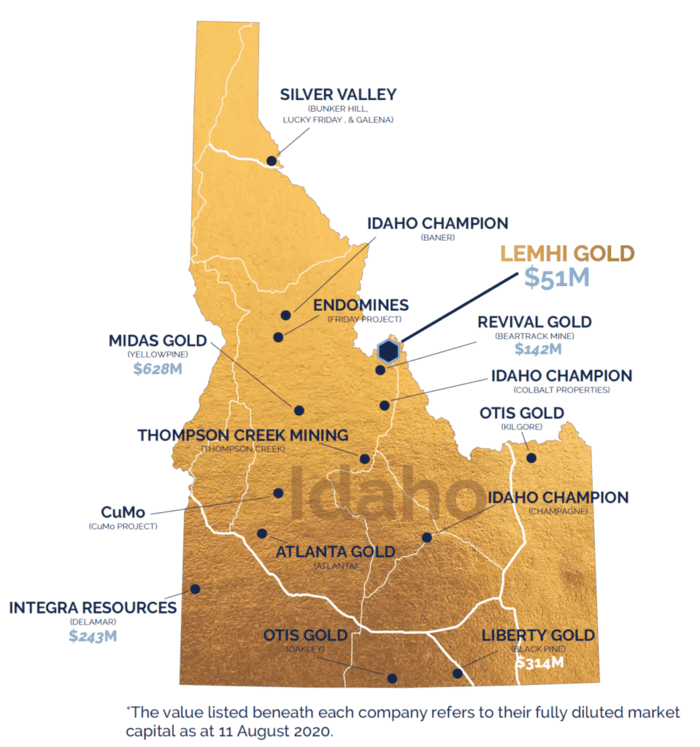 This is a classic story of when a real gem, one hidden from the mining world for over a decade, suddenly comes into play after it’s liberated from private hands.

The Lemhi Gold Project does have a history though. It’s changed hands several times and has endured multiple down cycles in the metal.

This history has de-risked the project to a degree. 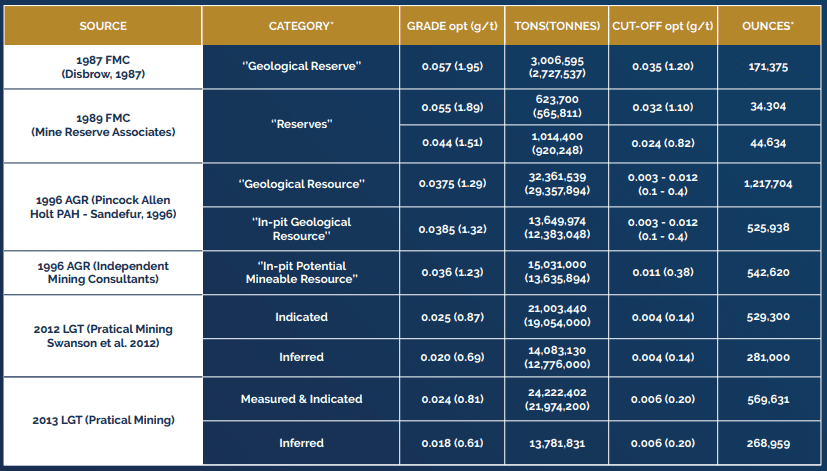 The disparity in these estimates was due to property boundary constraints that seesawed over time.

The company has addressed these property boundary issues by consolidating many of the key claims in the region.

“Having secured a total property package of approximately 30 square kilometers surrounding the historical Lemhi oxide gold mineralization allows the Company to increase its chances of discovering further satellite deposits. Given the current geological interpretation and the magnitude of the mineralized body, we feel that securing this additional land was imperative, as it will allow the Company to pursue an aggressive exploration program in conjunction with resource focused drilling.”

Lemhi is a near-surface deposit

This oxidized material, where there is a healthy component of free gold, opens up the possibility of a low-cost open-pit heap leach mining scenario.

Freeman’s first step will be validating the historical data via an aggressive drilling campaign, one designed to move the historic ounces into 43-101 compliant categories.

The second step will be growing the ounce count via resource expansion and exploration drilling.

The company is initially targeting a resource between 1.5 and 2 million ounces.

On the subject of exploration, the potential to grow this resource into a world-class ore-body is very real. Deposits of this type are often part of a much larger mineralized system.

The deposit is open in multiple directions, including at depth where high-grade feeder zones may come into play.

Importantly, much of Lemhi’s 30 square kilometers has seen little in the way of (modern) exploration.

Those who understand the underlying dynamics of the gold arena—lean project pipelines, Peak Gold, Printing Presses Gone Wild—are piling into high-quality junior exploration companies, like Freeman, in the expectation of a bull run of epic proportions.

Freeman announced their bought deal $6.5M PP on June 24th, and on the very same day, they upsized it by nearly 40% (it was ultimately upsized by 60% as per the July 28th headline).

“We thank existing shareholders, new investors and the syndicate of Underwriters for their support via this oversubscribed bought deal financing. The strong demand is a testament to the quality and potential of the Lemhi gold project located in Idaho, USA. These funds will allow Freeman to complete a work program as the Company works toward a maiden National Instrument 43-101 compliant gold mineral resource estimate, focusing on near surface, oxide material defined by previous operators. We look forward to keeping you updated as we progress.”

On August 19, the company announced plans to conduct 5,000 meters of diamond drilling at Lemhi, along with metallurgical test work and an extensive ground campaign (the more legit companies in this arena will always conduct metallurgical studies concurrent with drilling).

Infill drilling will be designed to increase confidence in the resource and maximize the ounce count.

Getting back to Freeman management consolidating its interest in the Lemhi project area, the company dropped two important headlines in recent sessions:

Yamana Gold (YRI.T) held a back-in right on the Lemhi project which Freeman managed to extinguish via the issuance of 4,035,273 FMAN common.

This was a real heads-up move on management’s part—bringing a Senior Producer to the table is never an easy task.

“We are delighted to welcome Yamana as a 5% strategic shareholder. Having a major gold producer with Yamana’s caliber take a significant position in our Company is a major vote of confidence in the project and the team we have assembled. We hope to work together over the coming months and years. The Transaction removes the existing back-in agreement on five of our patented claims which is a major step in de-risking the Lemhi project. The project is now free of all back-in rights.”

Here, the company announced the acquisition of the Moon 100 and Moon 101 unpatented mining claims, located within the Lemhi (historical) resource area.

This is another heads up move on management’s part.

The grades and widths of these three highlight hits are worth revisiting: 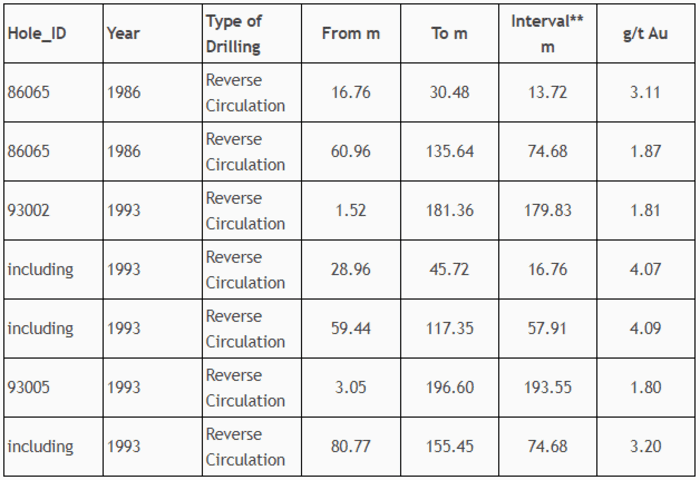 **Intervals are core-length. True width is estimated between 70 to 90% of core length.

“When Freeman acquired the Lemhi gold project management was cognizant that two transactions were required to substantially de-risk the Project’s property package. The first item was to extinguish the back-in rights (please refer to announcement dated September 8, 2020), and the second was to acquire the remaining unowned claims within the resource area. The acquisition of the Moon Claims achieves this objective and mitigates the risk of limiting future resource estimates by excluding any ounces contained within the claims and, just as importantly, limiting further ounces due to pit design constraints. The Moon Claims have historical drilling with significant intercepts within and in the immediate vicinity of the claims that we can now incorporate into future work. Freeman now has a complete property package without any back-in rights. As a result, we can focus on our ongoing drill campaign without property constraints to maximize the potential resource.”

This is a solid team running the show. Super-solid.

I like the fact that CEO Randall has a recent exit—an all-cash deal that was valued at $265M—under his belt.

I talk a lot about endgames in these pages—significant deposits in the crosshairs of resource-hungry producers.

I suspect there’s an endgame here. 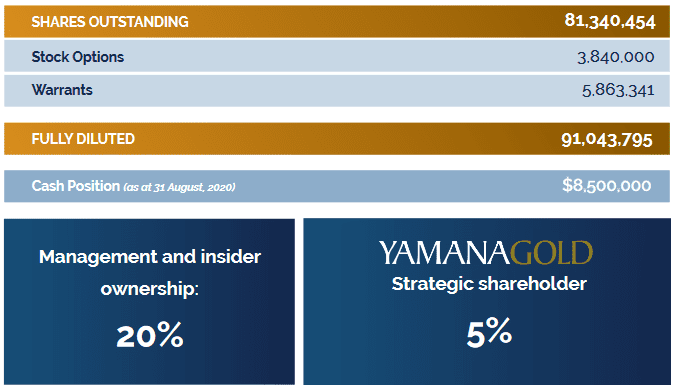 The company is drilling off Lemhi now. They should have a good batch of holes completed by now (drilling can carry on year-round).

The company expects to drop a maiden resource estimate before the year is out.