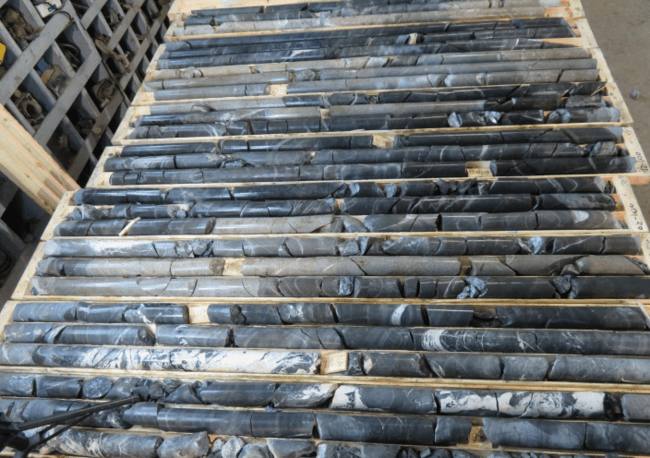 We’ve been watching the $1,850 level—the front line in the clash between gold bulls and bears—with keen interest here at Equity Guru (blue line, chart below).

Recent dovish tones out of the Fed—Chairman Powell’s resolve to continue asset purchases until “the job is well and truly done”—goosed the metals but good, generating significant upward price trajectory over the past three trading sessions.

This led to a selloff in the (negatively correlated) US Dollar.

After breaking through support at $91, the greenback continued its decline. This could turn into a downward spiral—there’s nothing but air between $88 and $80 (the 2014 low).

Getting back to gold, last week, we noted how the 50-period simple moving average (SMA) is likely being surveilled by a whole universe of traders.

After yesterday’s fireworks, we now have a clean, decisive break above that 50 SMA (blue line, chart below).

Got gold (and silver)?

The target at Grog is a large intrusion-related epithermal system. 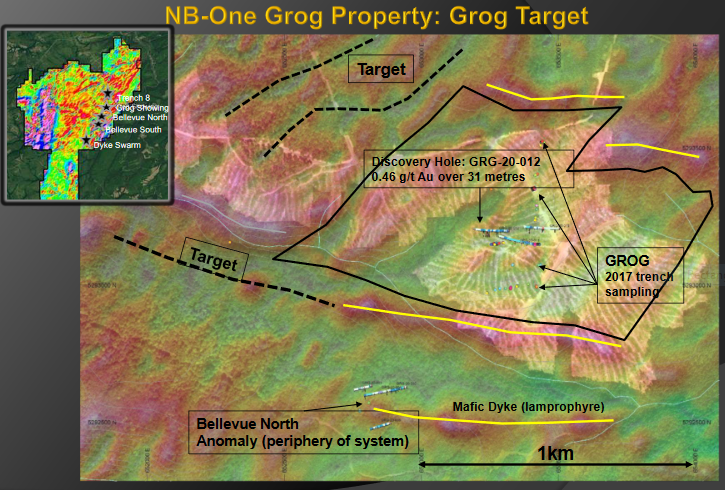 On September 21st the Company established a good correlation between geophysics and geochemistry at Grog.

A total of 128 geochemical samples were collected over 3 parallel lines (with approx 150 meters between lines)—the samples were taken every 25 meters. The objective was to confirm the position of the gold-bearing structure at Grog and test for the possibility of parallel signatures identified via 3-D magnetic inversion analysis.

B Horizon samples allowed X-Terra to determine rock types, alteration patterns, and precise levels of pathfinder elements such as Arsenic (As) and Antimony (Sb). The results yielded values up to 36 ppb Au, 291 ppm As, and 25.8 ppm Sb.

Elevated gold anomalies were identified on two of the three lines centered on the Grog target.

The arsenic and antimony elements complement the signature, offering a better read of the Grog target (antimony and arsenic are two key pathfinders for gold).

The combined, superimposed Au-As-Sb anomaly now outlines this target to 250 metres in width while also extending it approximately 750 metres. Excitingly enough, the same type of anomaly was able to be identified 700 metres east-south-east of the Grog target on a parallel trend.

“The correlation obtained during this phase of works between low mag, high resistivity and gold-arsenic-anomaly at the margin can be considered a significant step up in our understanding of the Grog system. Not only was the kilometric strike length of the known gold system reached and confirmed by a common signature, but our hypothesis was validated that two other parallel trends of the same orientation and thickness creating a 5km2 target. This threshold was an important step to reach considering that, this scale is widely accepted as precedent for exploring a deposit of a significant size.”

With a better understanding of Grog’s subsurface controls, the Company then set off to drill.

The following is a quote from my November 1st EG roundup:

During a recent chat with CEO Ferreira, I learned that drilling at Grog and Rim progressed without a hitch. Having worked as a contractor on highly technical, logistically challenging projects in the resource sector myself, I was impressed with the efficiencies Ferreira was able to deploy during this campaign.

I also learned that at least one hole at Grog tagged multiple zones of mineralization. Of course, hitting the right rock doesn’t necessarily guarantee economic values.

On December 15th, the X-Terra dropped the following headline:

“The drill program consisted of 472.5 meters over four holes to test a 400-meter section of isolated gold-bearing anomalies. This included the Rim vein surface discovery, where two holes, RIM-20-03 and RIM-20-04, targeted the Rim vein structure at depth and intersected multiple quartz veins in succession ranging from 10 cm to 1 meter in width.”

“The veins all exhibited crack and seal and breccia with thicknesses varying from a few millimetres to 0.5 metre inside a stockwork style structure. The gold results are closely associated with fine disseminated sulphides along with stylolites throughout the quartz veins. Hole RIM-20-02 located about 200 metres northwest of the Rim vein also intersected a group of quartz veins and stockworks over the last 20 metres of the hole at a depth of 80 metres.”

The structure is interpreted to be related to a parasitic fold hinge of kilometric influence trending north which has been identified via the regional magnetic survey. This north-east structure flank was cross-cut by drilling where quartz veining and gold values are associated with a siltstone-sandstone contact. It is noteworthy that the largest part of the fold hinge is located approximately 500 metres north of the drill area which is not outcropping and has never been subjected to any type of exploration. X-Terra plans to follow up in this area as soon as possible.

Additionally, metallurgical testing was conducted on a 129-kilogram bulk sample of surface (vein) material where an average grade of 79 g/t Au, and a concentrate grade of 35,317 g/t Au, was achieved.

Based on these higher grade surface values, it’s possible that the drill bit missed the richer veins by a hair.

This press release went on to state:

“This is an important step forward for the Rim vein target, as it remains open in all directions and only four drill holes have been completed on this target to date. X-Terra is now looking forward to expanding the work and drilling program at Rim very early in 2021 to test the siltstone/sandstone contact, which appears to be controlling the gold mineralization as well as the dominant fold hinge located 500 metres north of this area.”

IMO, the main event here is the Grog target, and we should see those assays shortly.

Also on deck, we have till sampling results out of the Company’s wholly-owned Troilus East property along the Frotet-Evans greenstone belt in northern Québec.

X-Terra has begun to receive portions of its geochemical results, MMI and Humus from its Troilus East property which will be used to determine the next phase of work, that being the IP ground geophysics which will be used to establish the properties first-ever drill targets. These results will be published once the information is compiled by X-Terra’s technical team.

According to the Fraser Institute, in its most recent “investment attractiveness” survey, Idaho makes its Top Ten list. 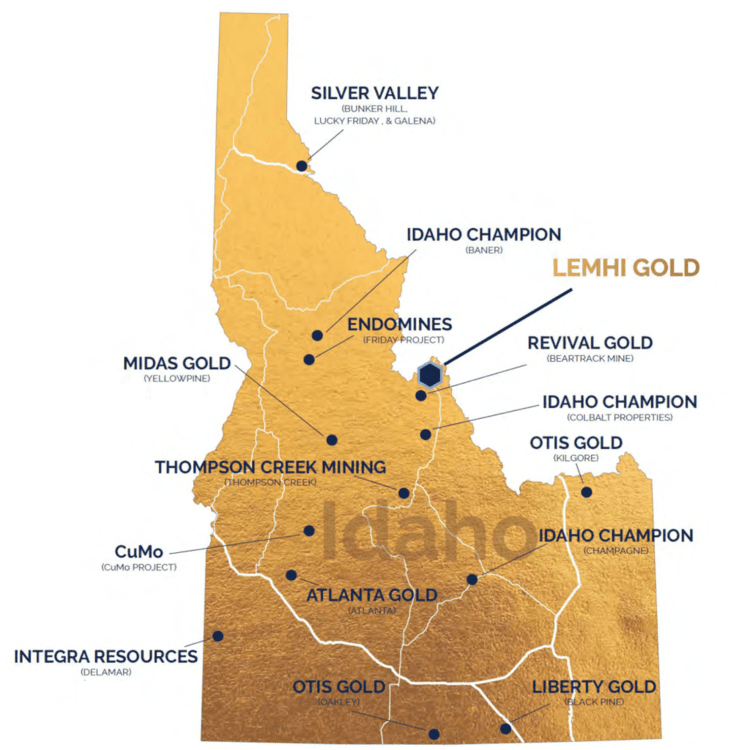 The variation in these resource estimates was due to shifting property boundary lines that saw several revisions over the years.

The company dealt with these issues by consolidating many of the key claims in the region.

Without a doubt, this biz-savvy crew put a lot of work into Lemhi prior to mobilizing a drill rig.

Much of Lemhi’s oxidized rock extends 30 to 50 meters below surface.

There’s a significant component of free gold in this oxide material, which opens up the possibility of a low-cost, open-pit heap leach scenario.

Lemhi is open in multiple directions, including at depth where high-grade feeder zones may come into play.

Converting the historic ounces to a 43-101 compliant resource is the next step to (further) de-risking the project.

Growing the ounce-count via resource expansion and exploration drilling is also a priority.

The company is initially targeting a resource between 1.5 and 2 million ounces.

Last August the company announced a 5,000-meter drill program at Lemhi, along with metallurgical test work and an extensive ground campaign.

Assay labs EVERYWHERE are slow due to understaffing, C-19 restrictions, and the large volumes of samples sent in for processing. But results have been trickling in.

On October 29th, the Company gave us a peek at their first 3k meters of core:

The day before last, on December 16th, the Company dropped the following headline:

We don’t get drill hole assays in this release, but we do get collar data for this first phase, along with commentary (see table-1).

According to this press release, drilling confirmed the presence of numerous structurally controlled stacked, flat-lying gold mineralized horizons initially identified by 70,196 meters of historical drilling (between 1984 and 2012).

Detailed geological logging of the new core has also identified mineralized zones of varying thicknesses, ranging from 10 to over 100 metres similar to that found in previous historic drilling and drill sections. Core samples have been sent to ALS Minerals Division, Vancouver, BC, and results are expected in the next 4 to 8 weeks. To date, 1,805 drill core and rock grab samples and 358 soil samples have arrived at ALS Minerals Division, Vancouver, BC. ALS is currently quoting turn-around times exceeding 60 days for analytical services. An additional 275 soil samples were sent to SGS Canada Inc., Burnaby, BC.

“During the execution of our first 5,000 metre twin and infill diamond drill program it became clear that historically defined zones have greater continuity than expected. As a result, we extended our Phase 1 diamond drill campaign to include additional infill and step out holes designed to test zones beyond historical limits. We are extremely pleased with this initial drill program, both the execution in challenging times as well as the extent and thickness of the flat lying mineralized structures. We have successfully confirmed and extended the presence of these stacked mineralized structures over a 600 x 700 metre area from surface down to over 260 metres deep. We look forward to updating shareholders as assay results become available.”

We’re looking forward to the first batch of assays out of Lemhi.